Barnabas returns to the mausoleum in the morning. Inside the secret room, the coffin has been torn to shreds. Chris is lying in a corner, asleep. Barnabas wakes him, and tells him they'll return to the cottage to work out their next plan. 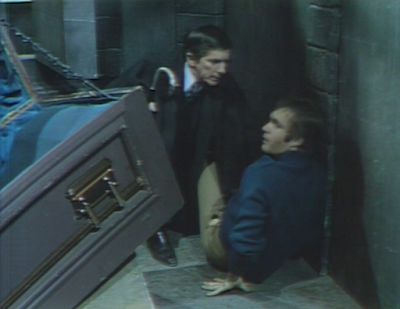 Chris and Barnabas return to the cottage, where they find Julia waiting for them. She tells Chris she knows his secret. He asks if she's willing to help him, too. She says she was against Barnabas helping him, but she has reluctantly agreed. Julia asks if he knows how it happened to him. Barnabas tells her that he got Chris' history, and will tell her on the way back to Collinwood. He reminds Chris that by locking him in the mausoleum, they were able to contain the violence. Julia explains that she will look into his blood to determine if she can identify a cause for his affliction. They leave him, with Barnabas confirming that he'll be back at night to take him to the mausoleum. 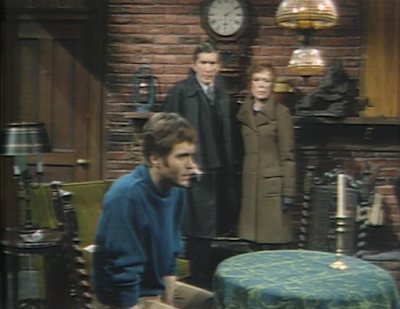 After they're gone, David arrives at the cottage and is surprised to see that Chris is alright. David tells him he's glad he moved in. He asks Chris if he's serious about Carolyn. Chris tells him not to pry into his affairs. David asks if he's going to work on the estate. Chris says that Carolyn has offered him a job, but he hasn't decided if he'll take it. Chris offers him a soda for his return hike to Collinwood. 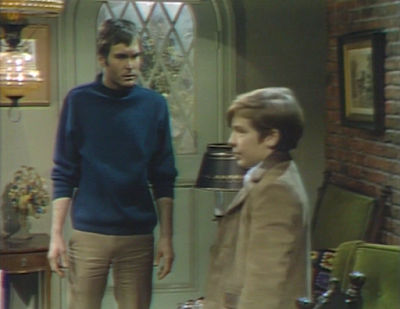 The door to the cottage opens, the lid of the decanter mysteriously opens, and Strychnine is poured into it. After returning from the kitchen, David finishes his soda and is sent on his way. 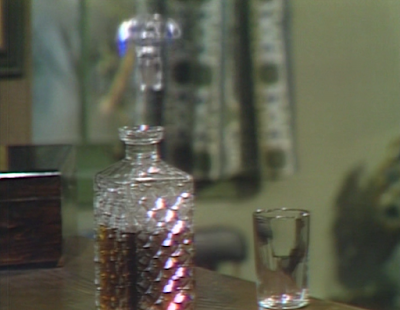 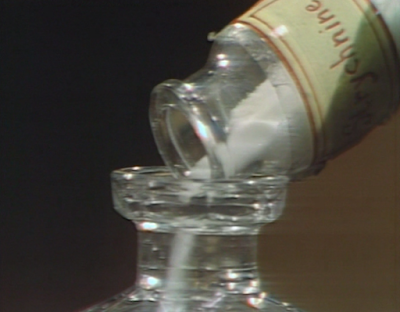 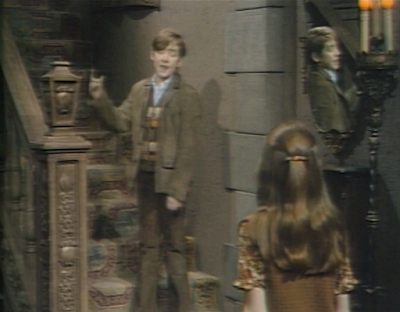 Barnabas comes to the cottage to check on Chris, who says that there won't be a transformation tonight. He explains that he can tell when it's going to happen. He says he's going to have a drink, and offers one to Barnabas. He declines, saying that he's going to go back to Collinwood to see Julia. Chris thanks him for his continued help, and bids Barnabas goodnight. After Barnabas leaves, Chris pours himself a drink. He finishes it and goes to pour another. Before he can, he buckles in agony. 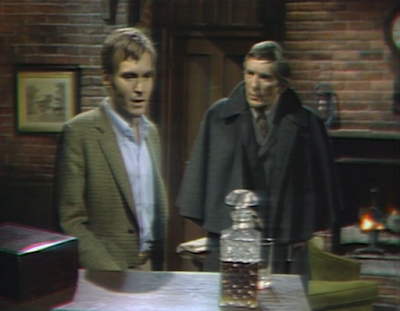 Barnabas returns to Collinwood and explains that Chris will be alright tonight. Julia shows him a book on lycanthropy she picked up today. She says that some think it's a mental disease, and Barnabas says that they saw him change to a wolf. She adds that someone can become a werewolf by being bitten and surviving; the other means being a curse. Barnabas concludes that Chris' affliction must be the result of a curse. 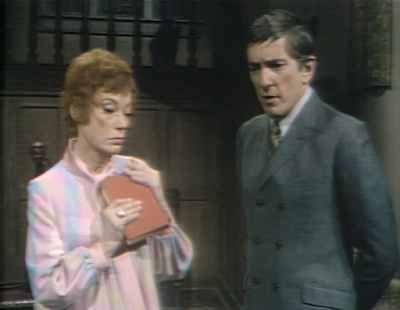 Chris stumbles around the cottage. He falls to the ground and grabs for the phone, but passes out. 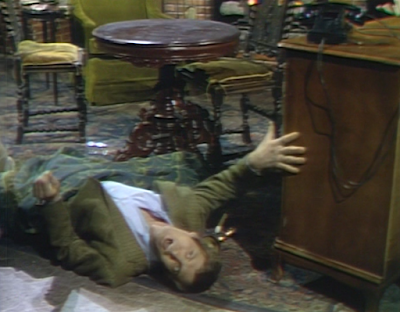 Julia is asleep in her room when she wakes to the sound of a woman sobbing. She calls out asking who's in the room. She sees a woman, Beth, who she follows out of her room and into the hall. 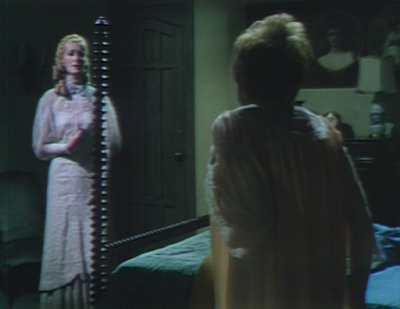 Downstairs, Barnabas sees a woman walk down the stairs and out the door. He thinks it's Carolyn. Julia comes downstairs and asks if he saw the woman, who she says was in her room. They follow the woman towards the cottage.

Beth enters the cottage and kneels at Chris' body. Barnabas and Julia enter and see Chris on the floor with no one around him. Julia kneels by him to check his vitals, and tells Barnabas that he's dying. 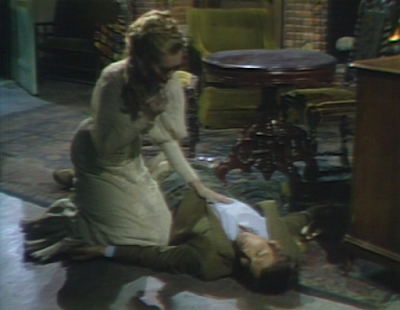 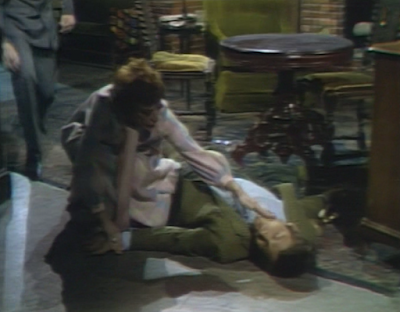 John: Quentin's ghost outside the cottage clearly didn't get his cue... The camera was on the door for quite some time before it finally opened of its own accord.

Christine: Maybe the door was stuck. I had to wonder why Julia was looking at an old copy of the newspaper announcing Maggie's disappearance from Episode 238. I suppose it was in the kindling pile at the cottage, but what was the significance of having it show up today? 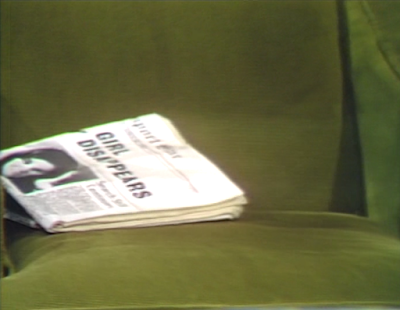 John: So do you think David was deliberately assisting Quentin with his task, or was our ghost just taking advantage of the fact that David got Chris away from his liquor bottle long enough to add poison to it?

Christine: I think he was probably helping him, which was why he was so snotty to Amy afterward, since he's only mean to her when he's thoroughly possessed.

John: At least Julia's diagnosis of Chris was that he was dying, rather than dead. Of course, in Collinwood terms, that means he probably really is dead.

Christine: After a string of death certifications that proved to be incorrect, it would seem she is being much more careful with her pronouncements. So Quentin poisons Chris and Beth tries to save him. I wonder if there will be a ghostly showdown between these two.