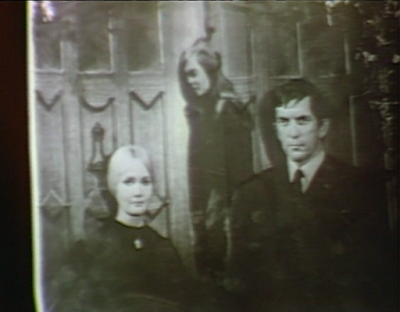 Barnabas shows Julia the photo with Vicki hanging in the background. He says she needs his help. Julia suggests there must have been an easier way for her to contact him. He tells her that he's got to go back in time to find Vicki. Julia tells him that he can't just will himself back to the past. She then tells him he can't change history. He tells her that he can. The kids come in, and David asks for the picture back. He says he thinks the figure in the background is Vicki. Amy asks Barnabas where Vicki went. Barnabas says he'll give the photo back tomorrow. David asks if he'll bring it to Boston, and Barnabas says they aren't going. They're upset, but Julia gets them to go out and play. Julia implores Barnabas not to go back to the past. 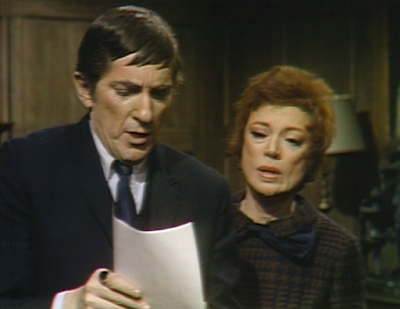 David is excited that they aren't going to Boston. He is puzzled by the picture, and Amy reminds him that Quentin didn't do that.

Barnabas stares at his portrait. Julia comes downstairs, and he tells her that he's going to enlist the help of Professor Stokes. Julia says she'll go with him.

David and Amy wander through Eagle Hill Cemetery. He tells her that they don't bury people there any more, but Amy points out an open grave, right next to the headstone of Peter Bradford. David wonders whose grave the open hole could be. He tells her that they'd have to get permission to have someone buried there. Amy says they should ask the caretaker, and they go looking for him. 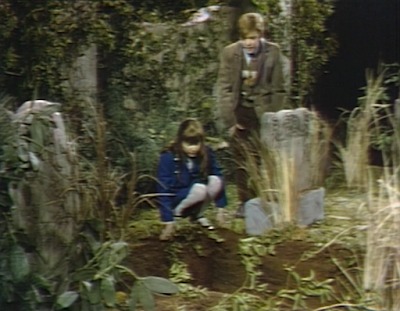 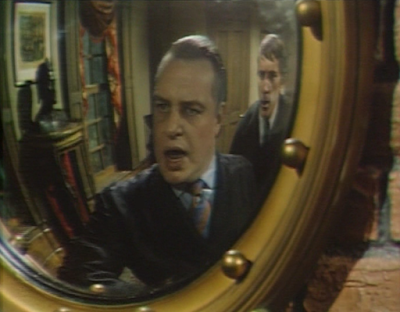 David and Amy were unable to find the caretaker, but when they return they find the grave has been filled in. 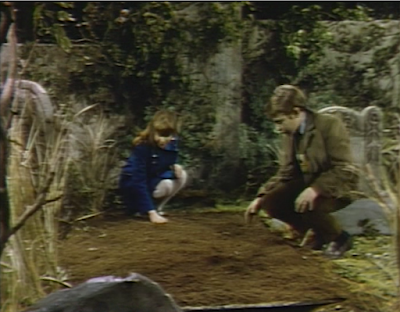 Stokes tells Barnabas there's nothing he can do. He explains that Bradford called Vicki back in time

Amy suggests that maybe Quentin filled in the grave. David says they should go find Barnabas.

Barnabas and Julia return to Collinwood. Julia apologizes to him. He says that he needs Bradford to pull him back through time. David and Amy run in and tell Barnabas they found an open grave in Eagle Hill next to Peter Bradford's grave. He sends them off to have dinner, and then tells Julia that he's going to the graveyard. She says she's going with him, and he warns her that she may be coming back alone. 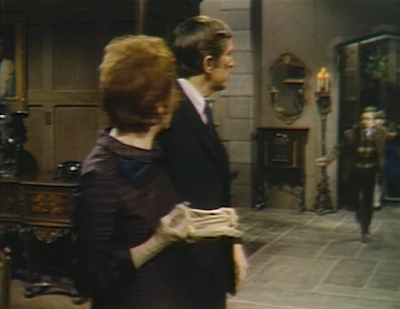 Amy and David come out of the kitchen, upset that Barnabas went to the cemetery without them.

Standing at the gravesite in Eagle Hill Cemetery, Julia says it's up to them, and tells Barnabas they should go back to the house. They start back, and then turn back towards the grave, where they now see a marker for Victoria Winters, hanged as a witch in 1796. 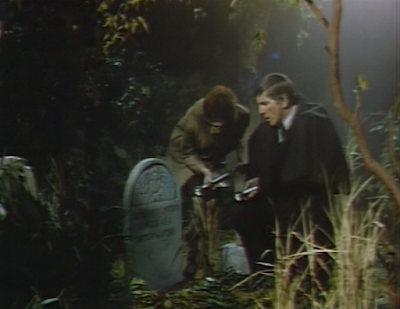 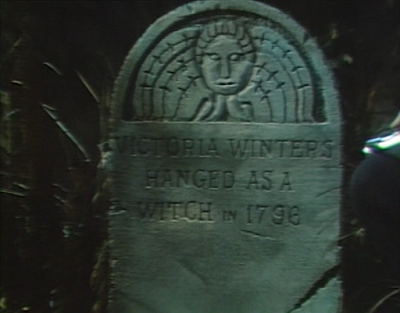 John: Again, Julia tries to convince Barnabas that he's a fool to think he might travel through time, while at the same time accepting that Vicki has done just that—twice!

Christine: Again, Julia is still in love with Barnabas and needs to get him to stop thinking about Vicki and start thinking about her, which requires that he remain in the present.

John: Julia suggests that they could take the kids to a movie since they aren't going to Boston... I wonder if Night of the Living Dead was playing at the Collinsport Cinema... or maybe 2001... or Planet of the Apes...

Christine: Barnabas and Julia are not cool enough to take them to see those movies. They probably took the kids to see Chitty Chitty Bang Bang. It looks like someone used a sharpie to change Peter Bradford's death date to 1796 on his gravestone. His death date was 1795 when we last saw his grave marker in Episode 463. Vicki must have kept him alive for an another year by returning to the past.


John: Did anyone notice the smoke/fog inside the drawing room before Barnabas and Julia showed up at the foggy cemetery? That's pretty thick fog to make it all the way into the house... 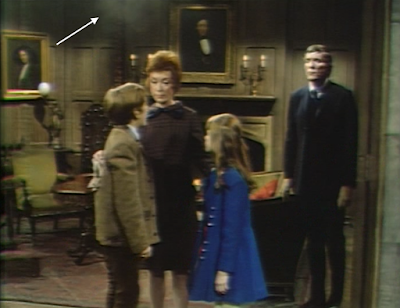 Christine: It reminds me of the time the smoke from Diabolos' office wafted in to Blair's place. It must be more evidence of Vicki trying to contact Barnabas. Stokes should have anticipated that everyone was going to start hitting him up for herbs once it got out that he was doling them out. His explanation that Jeff Clark's body is wandering around somewhere without Peter Bradford's spirit to inhabit it leads me to believe that we haven't seen the last of Jeff Clark. I wonder who bothered to bury and mark the graves of two criminals like Peter Bradford and Victoria Winters. I don't think Joshua would do it, Ben couldn't afford to do it, and Barnabas was chained in a coffin at the time and was unable to do it. So who did it?