Barnabas wanders through the woods with Roger's shotgun. He hears the werewolf, who then appears before him. He shoots the werewolf in the chest. It is knocked down, but it gets up and comes at him again. He brandishes his silver-edged cane, and the werewolf scurries up some rocks and runs off. 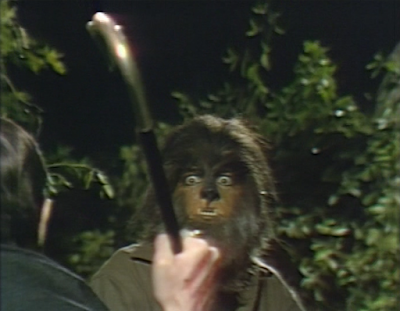 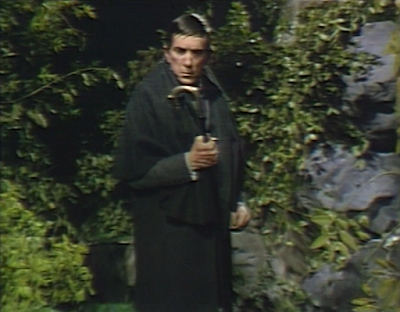 Julia paces nervously in Collinwood. Amy comes downstairs, dressed. Julia asks what she's doing, and she says she's going to see Chris. Julia sends her back upstairs, and Amy tells her that Chris is in danger—she dreamed it. Julia says she can't see him now, and grabs her. She begs to be let go. 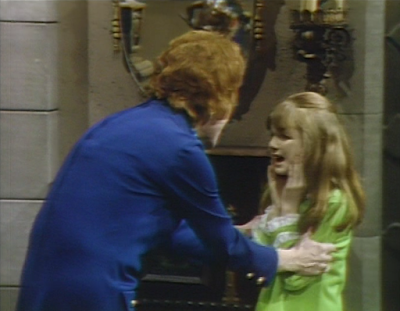 Amy tries to get past her, but Julia blocks the door. She tells Amy that she'll go check on Chris. Julia goes back into the drawing room and grabs a pistol. She heads out into the woods. Amy stands on the porch, looking up at the moon. 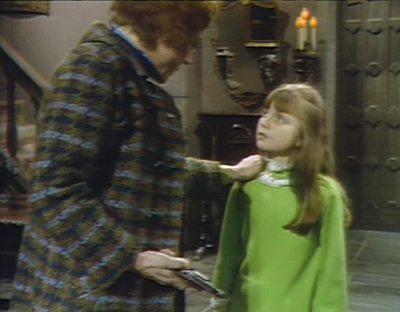 The werewolf sneaks through the woods.

Julia knocks on the cottage door, but there's no answer. She lets herself in, and calls for Chris. She sees that it has been ransacked. She checks around, and when she finds no sign of him she leaves.

Julia wanders through the woods, gun drawn. She walks past the rocks on which the werewolf was hiding. It falls to the ground, wounded from Barnabas' gunshot. 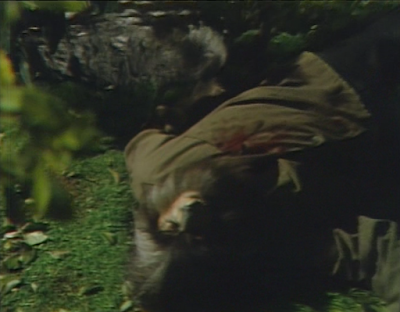 Julia returns home and tells Amy that she talked to Chris and everything is fine. Amy thanks her and goes upstairs to bed. Julia wonders what could have happened to Chris, and where Barnabas is.

The werewolf turns back into Chris, his shirt bloody where he was shot. Beth's ghost wanders over to Chris' body. 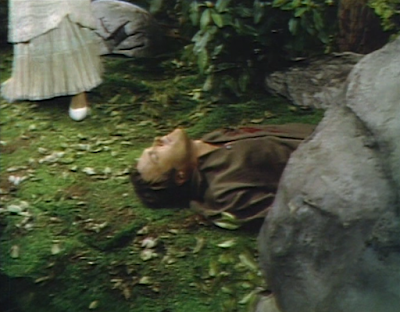 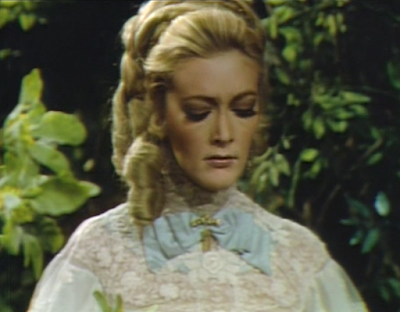 Chris stirs, and gets up. He sees blood on his shirt and calls for Carolyn. He's not sure what happened.

Amy comes downstairs in the morning and asks Julia about Carolyn. Julia says she's resting, because she isn't feeling well. Amy asks what happened, and Julia tells her Carolyn was attacked in the woods by an animal. Amy says she didn't want anything bad to happen to her. Julia asks what she means, and says Carolyn might have been killed. Amy is concerned. She says she shouldn't have gotten hurt. Amy tells Julia she wants to go outside and play. Julia says that's not a good idea, and Amy says she'll stay near the house. 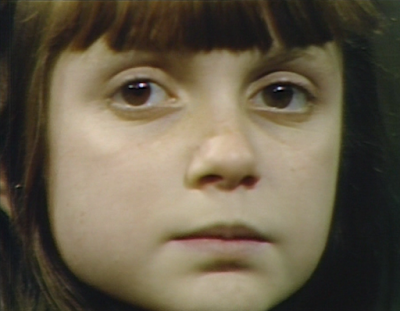 Chris returns to the cottage. He closes all the blinds and straightens up the furniture that had been knocked over. Barnabas knocks on the door, and Chris answers it after putting on a bathrobe. Barnabas confirms that he was there all night, and Chris tells him that he was. Barnabas explains that Carolyn was worried about him when he didn't come by last night. He then adds that Carolyn was attacked in the woods by a wild animal. Chris asks if she's dead, and Barnabas says she was shaken up, but she's alive. Chris says he'll get dressed and come up to see Carolyn. After Barnabas is gone, Chris is thankful that Carolyn is still alive. 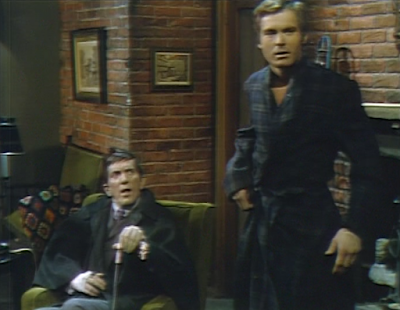 Amy wanders in the woods, looking for Beth. Beth appears before her, and Amy asks when David broke his promise. Beth shakes her head and cries. Amy asks how she can protect Carolyn. Beth points towards something, and Amy says she knows. 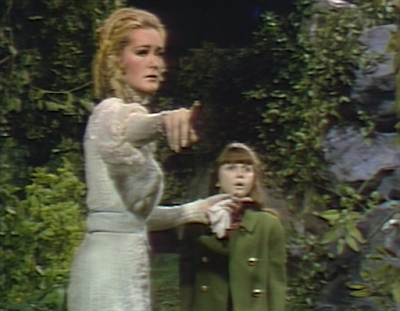 Amy shows up at the cottage looking for Chris. She lets herself in and lights a fire in the fireplace.

Barnabas tells Julia that he shot the animal at point blank range, but it didn't die. There's a knock and Chris arrives. Barnabas tells Julia that Chris was at the cottage all night. Julia is surprised to hear that, but sends him upstairs to see Carolyn. She follows Barnabas into the drawing room, and tells him that Chris was not in his cottage last night. She says the place was a shambles, and Chris wasn't there. She asks Barnabas why he would lie. 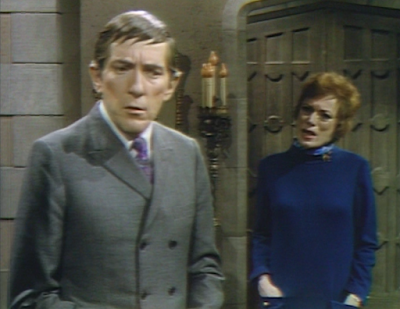 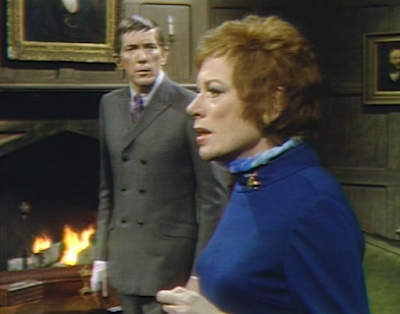 Amy takes Chris' shirt and throws it on the fire. She speaks to Beth, who is not present, saying she's done what was asked of her. Chris returns to find Amy. He asks her if something is wrong, and she says she has to go. She runs off. Chris sees there's something in the fireplace, and realizes it's his shirt 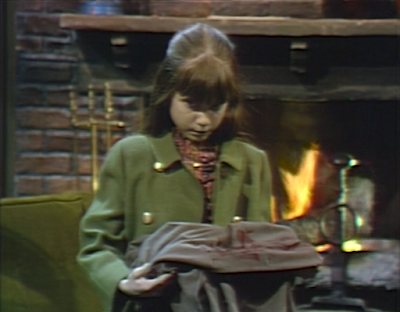 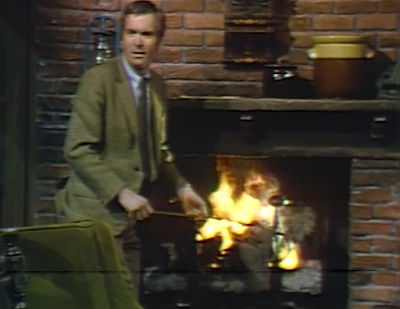 John: The staging of the attack on Barnabas is a mess. The gunshot is offscreen, and then the werewolf runs at the camera, not at Barnabas. It doesn't appear to be particularly well thought out or blocked.

Christine: It seemed as though there were cuts in the tape that made it appear even worse.

John: Beth is on the loose! No idea as to why she and Quentin can get around, let alone why they need to. They seem to communicate their desires pretty clearly from their West Wing headquarters... 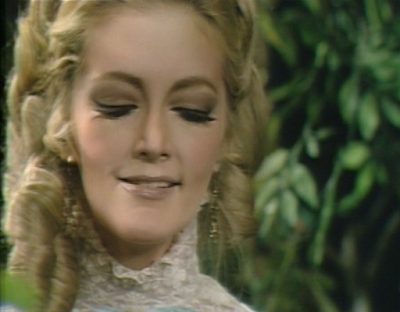 Christine: She's unhappy, then she's happy. Why would she care enough about Chris to have Amy destroy evidence that he's the lycanthrope?

John: How long until someone finally puts two and two together, pointing out that the werewolf and Chris have never been seen at two different places at once?

Christine: Or that they both share the same wardrobe.
Posted by John Scoleri at 6:00 AM