Angelique prepares to stab a voodoo doll with another pin when Gerard comes into the room. He realizes that she is in fact Miranda. He tells her that she has used her powers for the last time. He tells her that she's clever for recognizing him as Judah. He brings how he was beheaded because of her. He grabs her and she refuses to look into his eyes. He forces her to look him in the eyes, and tells her that he taught her powers when she was a young girl. She says that she has learned more since then. He threatens to make her human again. He takes away the powers he bestowed upon her. He lets go of her, he gives her back the voodoo doll, and his handkerchief. She wraps it around the dolls neck and tries to strangle it. It doesn't work. He grabs her and leads her out of the room. 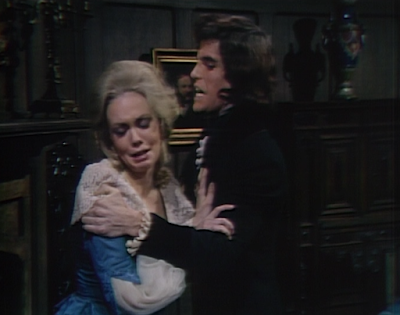 Barnabas returns to the East Wing where she sees someone Melanie speaking to her father, Justin Collins. She reminds him that she was adopted. He tells her that she saved his life. Catherine comes into the room and greets Justin. She asks if he's feeling better, and he doesn't respond. She shows her wedding invitation to Melanie, who asks if she's inviting Bramwell to the wedding. Melanie explains that he's coming back. Catherine says that if Morgan wants it, Bramwell will be invited. Melanie shows Justin the invitation and he freaks out. Melanie sends Catherine to get his medication. Justin tells Melanie that Catherine must not marry Morgan. He says no strangers in the house... he mentions 'the room'... and says no one must know. Melanie tells him they will not have the lottery again. He tells her to close the door so they can talk. She does. 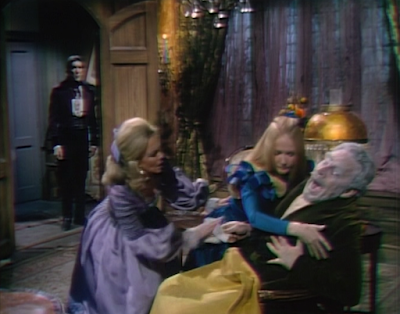 On the other side of the closed door, Barnabas wonders what room he was talking about.

Gerard assures Dawson that Miranda is harmless. He doesn't want to keep her there. Gerard tells him that Quentin will soon be dead, and people will think that Judah Zachery is gone. He promises to return to Miranda to give her his full attention once Quentin is dead. Dawson asks for permission to kill her if she tries to escape. Gerard encourages him to try to keep her alive. Gerard tells her that he'll see her after the execution, and leaves. Dawson tells her not to try to escape.

Leticia visits Desmond in his cell. He asks her to promise to give a letter to Flora that changes his will so that Leticia will get his inheritance. She tells him Flora has gone to get the governor. He says they found a law allowing them to execute a warlock's follower without a trial. He tells her that had they made it to Boston, he would have married her. She asks him to marry her in his cell. He tells her that it would be too dangerous. They might say she was part of their coven and arrest her. He refuses. She asks him to say the words so they'll know in their hearts. She says her vows aloud, and he does the same. They kiss. 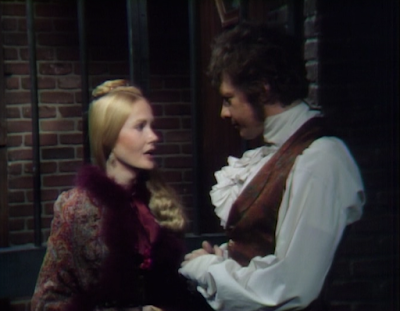 Barnabas visits Quentin in his cell. Quentin says he deserves to die for allowing Gerard to fool him. Barnabas assures Quentin that he will rescue Daphne, and run Gerard out of Collinwood. He says that Quentin will be avenged. Quentin says that he's more concerned about Desmond. And then he expresses concern for Tad. He asks Barnabas to try and convince him that he's not guilty, and that he was not afraid to die.

Dawson tells Miranda that she should have tried to fight Judah Zachery. She tells Dawson that she never used her powers to get a man, and that she could have gotten him. She goes to kiss him. He tells her that he almost believed her for a minute, but he knows how desperately she wants to escape. He says he's more afraid than he is attracted to her. He says there's nothing she could do to help Quentin or Desmond anyway. She asks why he won't let her go then. He tells her that she won't turn Judah against him, but when he turns away, she clocks him with a candlestick. Miranda realizes that he's dead. 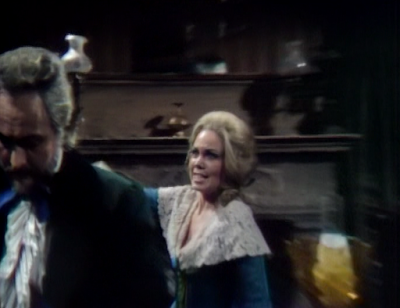 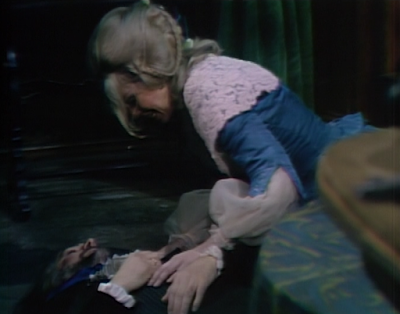 Gerard counts down the minutes to Quentin's execution. Leticia comes in and calls him Judah, saying he killed Gerard. She pulls a knife and he disarms her. As he leaves, he tells her that she is no longer welcome in the house.

Desmond and Quentin share a last moment together. Quentin tells him that what he minds the most is that Desmond got caught up in everything. The guards come for them, and Quentin leaves first.

Leticia tells Barnabas that she tried to kill Gerard, but nothing can save them now. He asks her where Valerie is.

The executioner practices on a log, slicing it in half. The guards bring Quentin out, and Gerard, who is there as a witness, tells Quentin that he wouldn't miss this for the world. Desmond watches as they lead Quentin to the executioner. 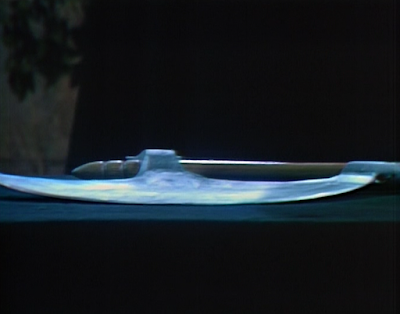 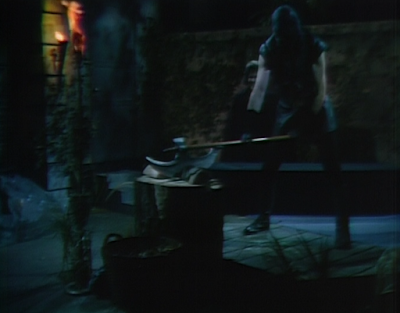 They start to blindfold him and he refuses it. He says, "When I was born, I saw the light of day. And when I die, I want to see the dark of night." He gets into position beneath the executioner. 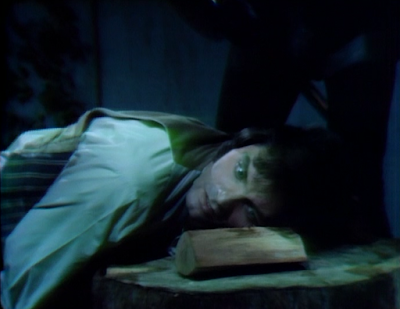 John: I love how people just decide to tune into parallel time as if it were a separate soap opera that they could pick up and follow on demand... I have to admit that I was surprised at this late date to see another new face. I was sure that Justin Collins would have been portrayed by Louis Edmonds.
Christine: Honestly, I'd love to see one of the characters standing at the door to parallel time with a bag of popcorn just once! The fact that Louis Edmonds is not playing the role of Justin Collins, in addition to the copious amount of pasty makeup he's wearing, might indicate that he has a short expiration date. 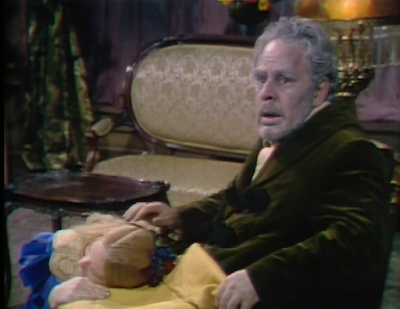 John: And just like that, Mirangelique is stripped of her powers? It's amazing how characters are so suddenly gifted with previously unused powers where the story calls for it!
Christine: It looks like he gave her a Barbie knockoff to test that her powers were gone. Perhaps that's why the spell didn't work! John: You'd think they could have at least had the executioner raise the axe before the episode faded to black...
Christine: If you look closely while Quentin's head is on the chopping block, you'll see the pole swing back as it had been raised, though I suppose you were expecting the cliche blade in the air. It is still a chilling moment. Do you think heads will roll tomorrow, or will something completely ludicrous happen to save the day?
Posted by John Scoleri at 6:00 AM