Daphne and Gerard exchange vows, and are pronounced man and wife. Quentin enters and says, "No!" Gerard sends the preacher away. Quentin asks Daphne why she did it. She appears to be in a trance. Quentin accuses Gerard of putting her under a spell. Quentin says he's taking her, and he'll kill him with his bare hands if he has to. Trask appears and tells Quentin his killing days are over, as he points a gun at him. Quentin realizes that he stepped into a trap. Trask tells Quentin he's taking him back to jail. Quentin asks if they've already got Desmond, and Trask confirms the police already apprehended him. Daphne comes out of her spell and hears Gerard refer to her as his wife. She asks Quentin what he's doing there, and he says he was tricked into coming, just as she was tricked into marrying Gerard. Daphne tries to stop Trask from taking him, and Gerard tells her that he is her husband, and she will do exactly what he says. He tells her he's taking her up to the bridal chamber. Quentin tells her to go upstairs. Gerard tells Quentin to take his last look at Daphne, and he pushes her out of the drawing room. 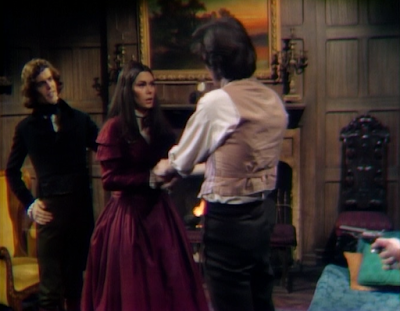 When they are alone, Quentin tells Trask that if there's a way to return from the grave, he's going to find it so he can torment him until he's dead. Trask leads him out of the house. 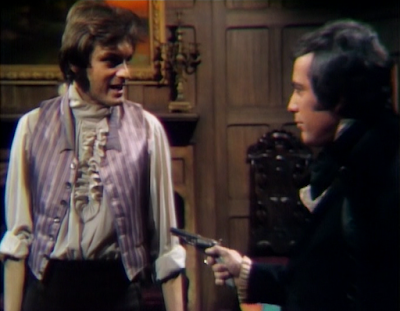 Daphne tells Gerard he can't get her to stay. He assures her that her opinion will pass. He pulls a cover off the bed. She says she hates him, and she won't be his wife. He says she will become Mrs. Gerard Stiles. She says he's not Gerard Stiles — he's the warlock Judah Zachery. She says there's no power on earth that can get her to change her feelings for Quentin. Gerard tells her to think it over, and locks her in the room. 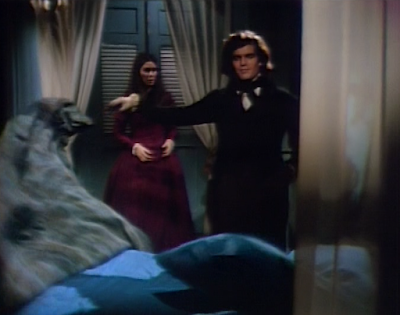 Barnabas returns to the East Wing. He hears voices and opens the door. He sees Catherine and Daphne. Daphne tells her that old Ezra Robinson asked if Catherine was planning to live in Collinwood after getting married. He said he had to warn her. He said there's a haunted room in the house, and that's why everyone keeps their doors locked at night. He told her that every generation, a lottery is held to see which family member has to spend a night in that room. People either die or come out mad. The last person to go in that room was Justin Collins. She tells Daphne she doesn't believe any of the stories. Quentin comes in and tells her she has made a wise decision. She sends Catherine downstairs to discuss wedding plans with Morgan. Quentin asks Daphne if she knows why he's been gone for seven years. She says he was in prison for manslaughter. He tells her he got into a fight with a man and killed him because he was telling stories about his family like Ezra Robinson. He tells her that he doesn't like to hear slanderous stories about his family. He asks her if he has made himself absolutely clear. She says yes, and apologizes. He then turns on the charm, and offers to take her for a walk. He grabs her arm and leads her out of the room. 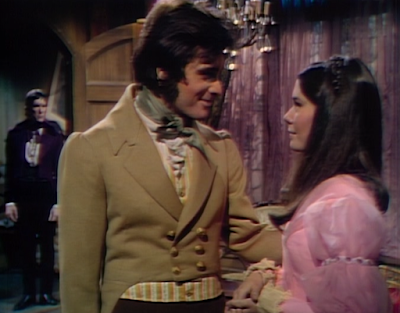 Gerard is in the drawing room when Valerie arrives at Collinwood to meet Barnabas. He says he hasn't seen him. He offers to wait with her in the drawing room, and when Barnabas arrives, he'll tell them the news. She asks about the news, and he says that Quentin was captured tonight, right after he and she were married. Barnabas hears this from the top of the stairs, shocked. 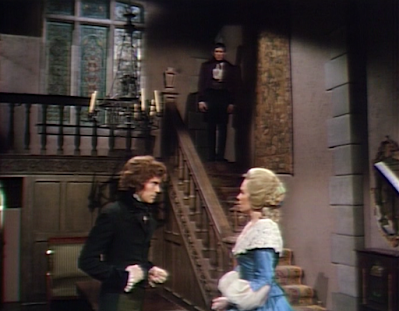 Barnabas goes to see Quentin and says they can still get him out. Quentin says there's more guards this time. Quentin tells Barnabas that Daphne was placed under a spell, and he has to help her. Trask comes in and tells them that tomorrow morning Quentin and Desmond will be executed. Barnabas warns Trask that they still have a private matter to settle, and that tomorrow might be his day... 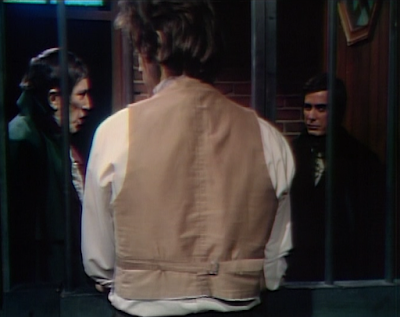 Barnabas returns to Collinwood. He tells Angelique they only have a day to save Quentin. He says he has no other choice. She has to save Quentin. He says that she can find the head of Judah Zachery and destroy it. She says that it is under the power of Gerard, and he would destroy anyone who approached the head. She says their only hope is to leave Collinwood. Barnabas says that they can be nothing more than friends. He tells her that he can never love her the way she wants to be loved. He says that he is human, and she's a witch. She assures him that she has changed. He says she will never change — her feelings towards others are cold an indifferent. He walks out on her and goes upstairs. 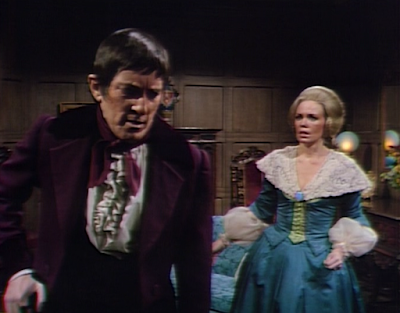 Barnabas comes downstairs and runs into Gerard. He says he's looking for Daphne. Gerard refers to her as Mrs. Stiles. Barnabas says the wedding is a fraud, and demands to know where she is. Gerard says Collinwood is his house, and he demands that Barnabas get out. Barnabas tells him he thought he would never come out into the open, and refers to him as Judah before leaving. 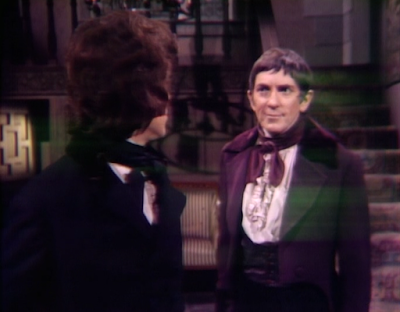 Gerard returns to Daphne's room and tells her that Quentin will be executed at dawn. He offers to deliver a message to him. She screams that she hates him, and attacks him. He tosses her onto the bed.

Angelique stares at the portrait of Barnabas and thinks she will help Quentin, but she's only doing it out of her love for Barnabas. She goes into the drawing room and stares into the fire. She summons the prince of fire and the dark creatures of nature to aid her in the destruction of her mortal enemy. She holds up a voodoo doll of Gerard Stiles, saying he's the embodiment of Judah Zachery. She stabs it with a pin. 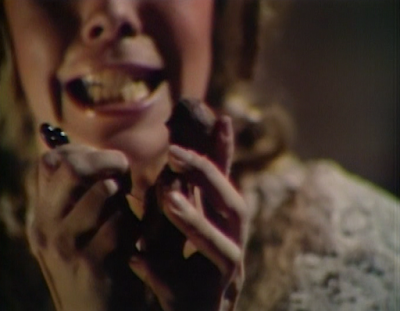 Gerard gasps in pain. Daphne asks what's happening to him as he stumbles out of Daphne's room.

Angelique prepares to stab the doll with another pin when Gerard comes into the room. He finally realizes that she is in fact Miranda. 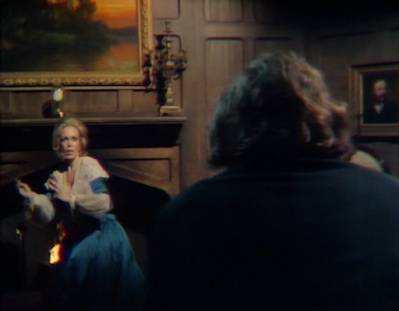 John: Wouldn't Trask be interested in understanding how Gerard put Daphne under a spell so that she would marry him? Or is he so excited to be bringing Quentin back to jail that he's not even paying attention?
Christine: Just like his dad, he's so fixated on the person he thinks is guilty of witchcraft that he misses the very obvious clues to the person who truly is guilty.
John: Mere seconds after parallel Quentin basically threatens to kill parallel Daphne, he starts hitting on her! Poor Kate Jackson had to spend the whole episode fending off lecherous men...
Christine: I don't understand why Quentin would tell her to do what Gerard said and go up to the "bridal chamber" when he should have advised her to run screaming willy nilly from the house to escape the beast.
John: So it sounds like poor Desmond is going to be executed without so much as a trial! Of course, it's quite possible that no one survives the confrontation between Angelique and Judah Zachery.
Christine: I am hoping Angelique only paused her curse for end of episode drama's sake, and that she'll be plunging the pin on Monday. Incidentally, I loved seeing Kate Jackson make faces in the fun house mirror! 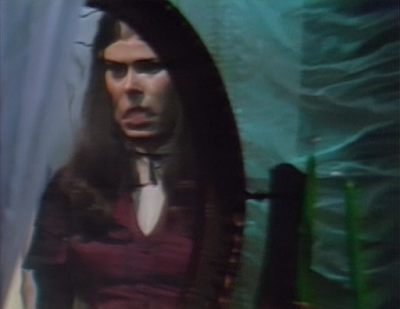 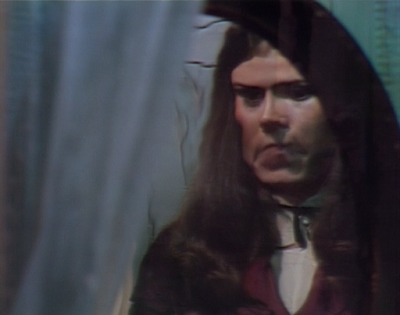 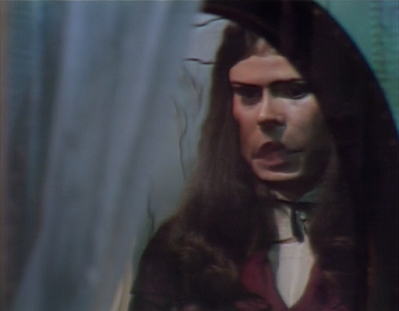