The executioner practices on a log, slicing it in half. Barnabas watches as the guards bring Quentin out. Gerard tells Quentin that he wouldn't miss this for the world. Desmond comes out as they lead Quentin to the executioner. They start to blindfold him and he refuses it. He says, "When I was born, I saw the light of day. And when I die, I'm going to see the dark of night." He gets into position beneath the executioner, who raises his axe. 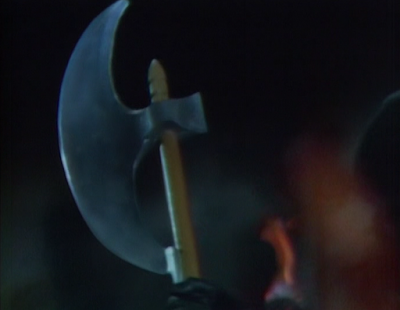 Valerie calls for the executioner to stop, saying that Quentin and Desmond are innocent, pointing out that Gerard is the one who is guilty. She comes forward a covered box. The judge asks her who she is. Barnabas explains that she's his wife. She tells the judge that Dawson mentioned the head of Judah Zachery possessed Quentin, and she claims she found the head tonight it Dawson's home. She pulls off the cover. 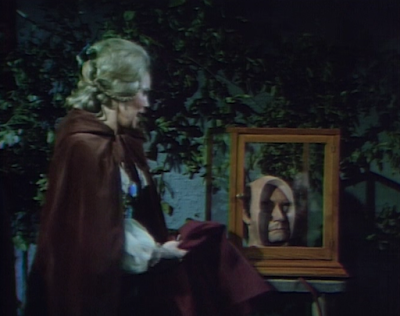 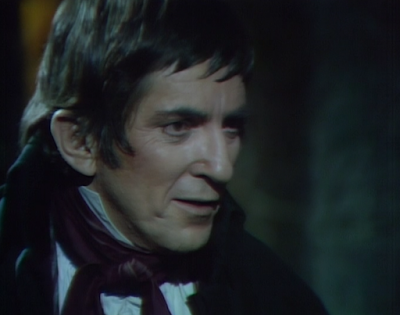 The judge says he died in 1692, and she says it was her testimony that sent him to his death. Gerard points out that she's deranged, and she says that he knows he bewitched her, until he took away her powers last night. Barnabas points out the significance of finding the head in Dawson's home, and Gerard and Trask suggest that she may have placed it there herself. She tells the judge she would swear under oath. 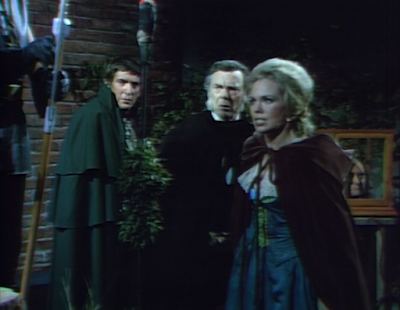 While they argue, Desmond grabs a gun from a guard and shoots Gerard, calling him Judah. He falls to the ground. 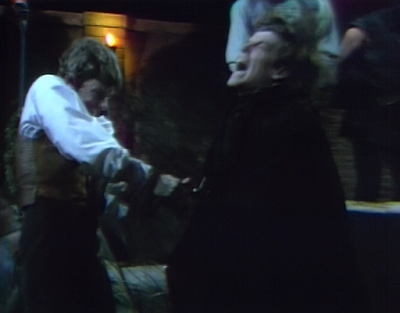 Barnabas tells the judge to look at the head, which is transformed to a skull. Barnabas says they need no more proof. On the ground, Gerard says that Judah is dead, and now he is free. He asks to see Quentin. Quentin kneels near him and accepts his apology as Gerard dies. The judge says he's convinced, and releases Quentin and Desmond. 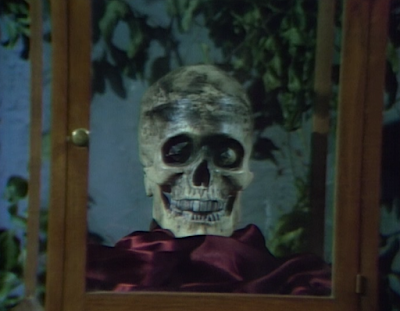 Trask points out that Valerie is a witch. The judge says she'll be arrested. Barnabas asks if he can have a few minutes with her before turning her in. He goes to Angelique and thanks her. She asks if he knows why she did it, and he says he does, and thanks her again. She says she did what she felt she had to do, and the rest is up to him. He promises to get her out of this, and leaves her to go with the guard. 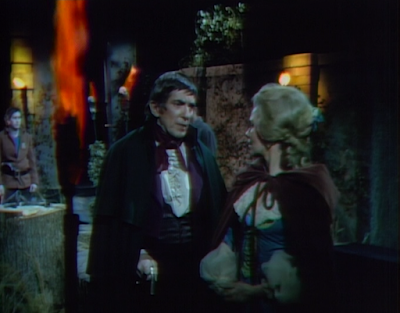 Back in Collinwood, Quentin says they need to find Daphne. He sends Desmond to go see Leticia.

Daphne hears footsteps and grabs a candlestick. When Quentin comes in, he tells her that Gerard is dead. They kiss.

In the East Wing, Barnabas searches for Daphne. He sees Catherine in parallel time. He then sees himself enter the room. Bramwell tells her that he's waited five years to see her. They kiss, and she pulls away. He asks if she's happy to see him, and she says that he's been gone for five years. He says he came back to marry her. She says he can't; that she's agreed to marry Morgan. He demands that she look at him. He asks if she loves him. She says she does not. He says it's impossible. He says it has always been the two of them. She apologizes to him. He says he won't let her ruin both of their lives. He says he'd like to kill Morgan. She says no one can ever talk to him when he's angry. She says it was a difficult decision to decide to marry Morgan. She says that he she could never find the life she wants together. He says they belong to one another. She says they would destroy one another. 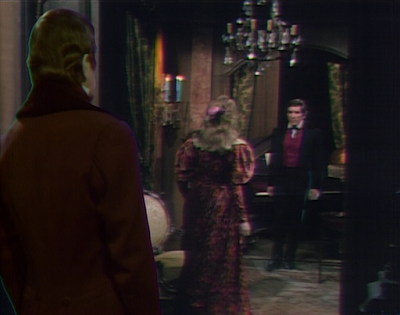 He says she must have a rich Collins over a poor one. Bramwell says Morgan only wants her because he doesn't want him to have her. He says that the family drove his father Barnabas to his grave. He says only Justin loved him, yet he had his accident before he could give him his rightful place in the business. He says that's why he left, and now he has returned to find out that they have claimed her, too. He says it's the final insult. She says it was her choice. He says he told her he would live to see the day when the Collins family would come crawling to him. He grabs her and kisses her one last time before walking out on her. 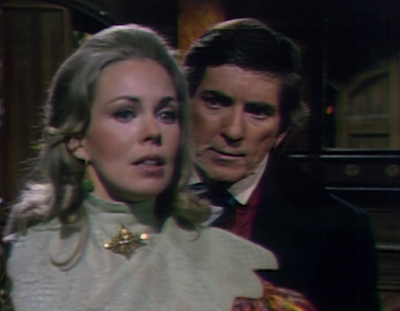 Quentin brings Daphne downstairs. She doesn't understand what happened. Quentin says he doesn't either. Barnabas comes downstairs and seems distraught. Daphne asks if he saw something in parallel time. He says he realizes that he must go tell someone he loves how he feels about them.

Barnabas finds the judge to discuss Valerie's case. He says it's too late. Barnabas asks why. The judge explains that the tribunal interviewed her and let her go. 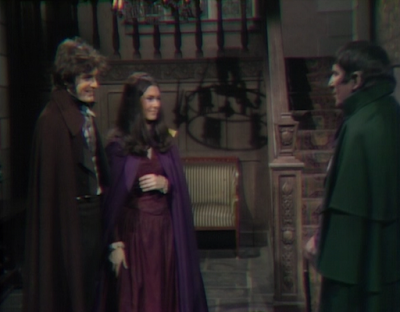 Barnabas tells her that he knows how she feels. Trask bursts in and calls out, "Die, witch!" before shooting her. John: Were beheadings so common in 1840 that they had an executioner ready to go, with a big axe and the full wardrobe, just waiting to get the call?
Christine: Not only that, but it appears they have an execution rehearsal before the big event, since they did not have flaming torches yesterday, and neither Trask nor Barnabas were present.
John: Wow. Talk about a rush to judgement! I'm sorry, but it's a little too simple to wrap up such an extensive storyline with a simple gunshot. I can't even begin to understand why Judah's head would decompose when the unrelated body he possessed was killed. The nature of his existence already established that his life was not tied to a corproeal form. To think Julia missed out on the whole thing! Seems like they were anxious to get everyone over to the parallel time storyline, and cut the cord on Gerard Stiles and the curse of Judah Zachery. Should we assume that everything in 1970 is now hunky-dory?
Christine: I agree it did not make sense for Judah be killed by a gunshot and have his head decompose to a cool looking skull in a box, though perhaps it might make you feel better to think of him like a cat whose nine lives suddenly expired. If Gerard was truly free of possession when he died, then I think it's safe to assume that zombie pirates will not overrun Collinwood, and that Tad and Carrie won't be haunting the playroom. At least it makes me feel better to think that the present day Collins family members are safe, even if we may never see them again.
John: Adding insult to injury, the self-confessed witch talks her way out of conviction in a matter of minutes; in front of the same tribunal that convicted Quentin and Desmond to death on mere circumstantial evidence! Of course that was all a setup to allow Trask to shoot her. Let's face it. If Trask was going to kill her in cold blood, he would have shot Barnabas at the same time, given that he holds him responsible for his father's death. Not to mention that Barnabas also can likely prove that Trask walled him up in the basement of his shop and left him to die. Did I mention that it's only Tuesday???
Christine: It certainly was an eventful episode for a Tuesday! Perhaps Trask intends to turn the gun on Barnabas next. If he doesn't get the shot off before Barnabas grabs him by the throat, then I expect he'll be hanging out with his dad in Barnabas' basement before the end of the week.
Posted by John Scoleri at 6:00 AM