Daphne goes looking for Edith and finds Gabriel's empty wheelchair. Gabriel sees her and hides before she can see him. He runs downstairs and goes into the drawing room. Daphne calls to Edith, and goes into the drawing room, where she finds Gabriel sitting in his wheelchair. She tells him she saw his empty chair in Edith's room. She says she thought something was wrong. She asks where Edith is. He tells her she had an appointment, and then adds that he has two chairs. He says he didn't hear her come in. She tells him she saw strange things in the East Wing. She explains what she observed, when Julia and Stokes arrive at Collinwood. They hear Daphne describing parallel time, and Julia asks her where she saw this. Daphne tells her that it was in the East Wing. Stokes asks her to show them where the room was. Gabriel is upset and says no one should be in the East Wing. Julia asks why he's so upset, and he tells them to go ahead and waste their time. 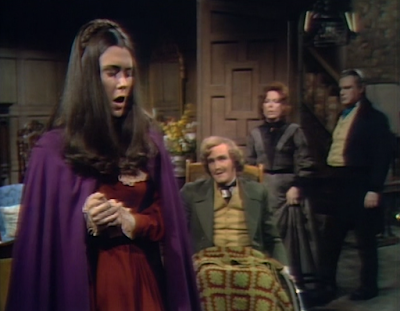 Daphne leads Julia and Stokes to the room in the East Wing. They go in and it's empty. Julia tells her that they believe her. Stokes asks her to describe what she saw. She says she saw a strange man named Morgan Collins. She also says she saw Valerie, but the man called her Catherine Harridge. She says the next person she saw was herself. Stokes asks what they talked about. Daphne describes the marriage proposal, and then the other Daphne mentioned another man coming to Collinwood. She also says that Daphne was frightened of the house. She says the people couldn't see or hear her, and she couldn't even walk into the room. Stokes asks her if she's familiar with parallel time. When she says she is not, Stokes spells it out for her, and says that he and Julia have shared a similar experience. He also says they should step outside the room before it changes and they get stuck in parallel time. They leave the room together. 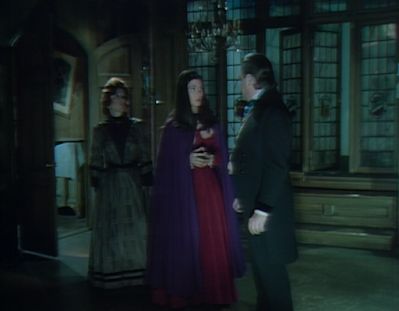 Julia and Daphne have gone, and Stokes, outside the room, hears voices. He opens the door to see Morgan and Catherine professing their love for one another. Something comes up from their past. Stokes notices a Julia look-alike eavesdropping on Catherine and Morgan in parallel time. She comes in and Morgan asks how long she was standing there. She says she was there just a few minutes. Catherine leaves and tells Morgan to stay and talk with his aunt. After Catherine is gone, she asks if he asked Catherine to marry him. She reminds him that Catherine is strong and loyal. She asks where they will live after their marriage. He says in Collinwood of course. She reminds him that he can't bring someone new into the house. She asks how he could explain to his new wife that her life is in constant danger. He tells her that he thinks things in the house would change if she were here. Morgan tells her that they can't live in fear forever. Morgan's aunt closes the doors so no one else can hear them. When Stokes opens them again, the room is empty. 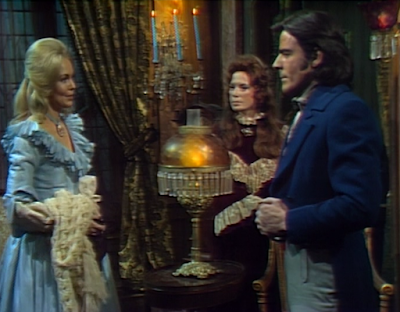 Daphne has trouble comprehending the time warp Julia described. She tells Daphne not to go inside the room, or she'll risk being trapped in another time.

Gabriel wheels into the drawing room and asks Daphne if the visitors left. She says they did. He asks if they found any strangers in the East Wing. Daphne says they did not. He asks if she has seen Edith yet, and then adds that she wouldn't be back so soon. He says the nature of appointment with Gerard Stiles would last longer than an hour. Daphne is shocked. He says that Gerard is through with her, and will soon dispose of her. Daphne can't believe he's talking about his wife that way, and leaves the room.

Daphne returns to the East Wing and finds Edith's body. She screams. She thinks about what Gabriel said, and assumes Gerard must be responsible. She runs downstairs, calling for Gabriel. She goes into the drawing room and finds Gerard. He asks what she wants with Gabriel. She says it's not important. He accuses her of lying to him. She says she's going to go upstairs to sleep. 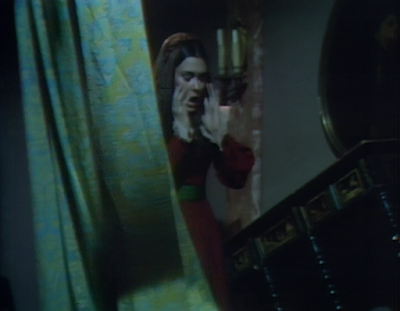 Daphne goes into Edith's room, and finds Gerard's cuff link on the floor. She hears footsteps and hides behind a divider. Gerard walks in, looks around, and leaves. Daphne opens the door and Gerard is standing outside. He asks her what she's up to, and says neither of them are leaving until he finds out. She knocks him out with a candlestick and leaves, locking the door behind her. 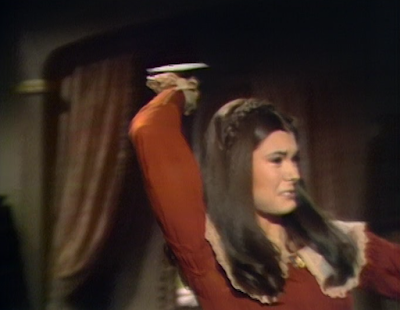 Daphne finds Gabriel in the drawing room. She tells him that Edith has been murdered, and she knows who killed her. She says they have to go to the police, saying that Gerard killed Edith. She adds that he almost killed her, too. Gabriel tells her that they're safe. He asks for all of the details on what happened. She shows him the cuff link she found in Edith's room with the letter G on it. She says that he can tell the police about the affair and they'll surely arrest Gerard. He points out that the cuff link is his own. Daphne is shocked. He thanks her for bringing it to him, and stands up and walks towards her, telling her that she won't be going to the police. 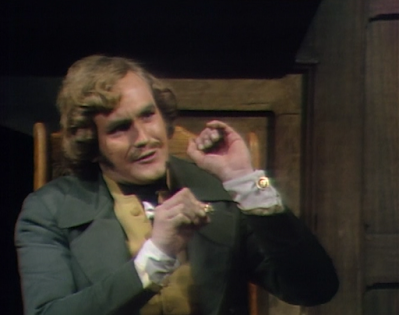 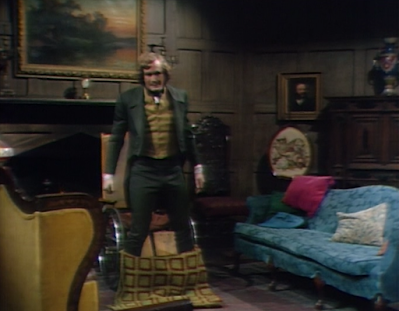 John: I was going to ask why Gabriel didn't use the secret passageway to sneak out of the drawing room before Daphne found him, but it looks as though our writers may have cheated the opening of today's episode, and miraculously had him in his chair (or a backup chair) when Daphne bursts into the drawing room. I hate when they do that.
Christine: It could be that he used the secret passage to run up to his room, grab his wheelchair and run back down with it. It may be plausible that he has another wheelchair, but Daphne should have realized that there's only one afghan like that.
John: Do you think Stokes was surprised to find the box marked ABC when he re-entered the room in the East Wing? Once again, I suspect that the events that appear to us in parallel time will be perfectly timed with our protagonists wandering into the East Wing. 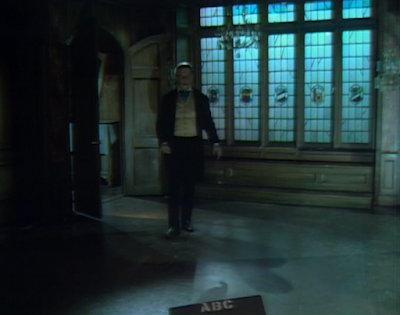 Christine: I was cheering when Daphne clubbed Gerard over the head before we were forced to endure another make out dream between the two of them.
John: So do you think Gabriel is going to kill off everyone from the 1840 timeline, and force Julia and Stokes into parallel time? Wouldn't it be funny if Edith's dead body suddenly showed up in parallel time? That would freak out Morgan and Catherine!
Christine: I am reluctant to go to a parallel past when Barnabas and Julia have not finished the task of saving Collinwood from destruction. I still can't accept that we have forever lost our original Collins family and want to know that Liz, Roger, Carolyn and David have been restored. 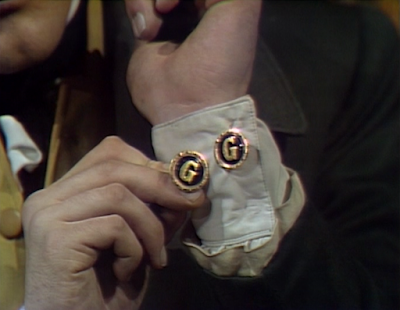