Daphne finds Gabriel in the drawing room. She tells him that Edith has been murdered, and she knows who killed her. She says she's going to the police, saying that Gerard killed Edith. She adds that he almost killed her, too. Gabriel tells her that they're safe. He asks for all of the details on what happened. She shows him the cuff link she found in Edith's room with the letter G on it. She says that he can tell the police about the affair and they'll surely arrest him. He points out that the cuff link is his own. Daphne is shocked. He thanks her for bringing it to him, and stands up and walks towards her, telling her that she won't be going to the police. She screams. He grabs her and covers her mouth. He tells her that he can walk, that he killed Edith, and because she knows too much, he's going to have to kill her, too. 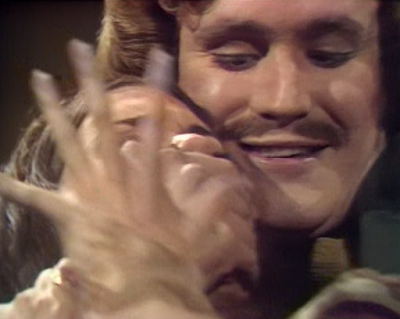 Gerard comes to, and finds himself locked in the room. He calls to Daphne.

Gabriel ties Daphne to a chair. He tells her that in addition to Edith, he killed Randall Drew, too. He says it was all part of his plan to get rid of Quentin, and it worked, though not as well as he thought. She asks if he actually thought he would be master of Collinwood. He points out that he tried to get rid of Gerard, but he has more lives than a cat. He adds that he'll see to it that Gerard's time has come. He tells Daphne that since Gerard loves her, he'll use her as a bargaining chip to get everything he wants from him. She says that if he lets her live, she'll go to the police. He assures her that he'll be so far away the police will never find him. She says he can't let Quentin die, and he says it's either Quentin or him. He gags her, and leaves her tied to the chair. He locks the door, leaving Daphne trapped inside. 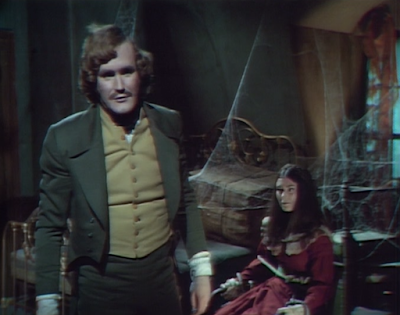 Gabriel hears voices in the East Wing, and when he swings the door open, he sees who he assumes is Flora. He speaks to her, but she can't hear him. He's unable to enter the room. Mrs. Collins asks Stella if she's happy with her position at Collinwood. Stella tells her that she is. Mrs. Collins asks what made her forget the rules that were outlined to her when she was hired as a secretary. Stella says she thought someone was in trouble. Mrs. Collins reminds her that she is to remain in her room after dinner. Stella says they heard a scream, and it sounded like someone was dying. Mrs. Collins explains that nothing happened out of the ordinary last night, and she mustn't become hysterical any time she hears a strange noise in the night. Stella agrees. Mrs. Collins then closes the door where Gabriel is watching. 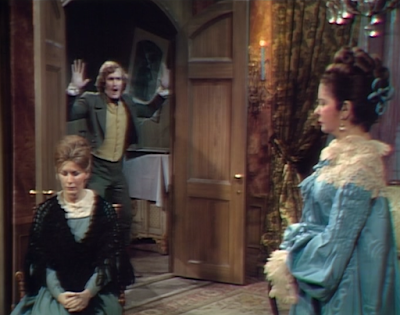 Gerard comes downstairs, calling for Daphne. Gabriel rolls in and asks Gerard what's wrong. Gerard says that something terrified Daphne, and she hit him over the head with a candlestick. Gabriel asks him when he got back. Gerard says he got back an hour and a half ago. Gabriel asks if he ran into Edith. Gerard asks why he would be with Edith. Gabriel says he knows what they're up to, and Gerard denies they are up to anything. He offers Gabriel an increase in his allowance if he keeps Edith away from him. He then leaves to look for Daphne at Rose Cottage. 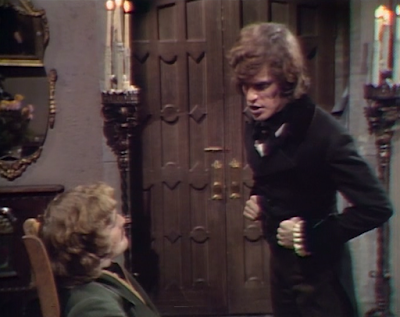 Samantha asks Gabriel where Gerard is. He tells her that Gerard is desperate to find Daphne. She asks why, and he tells her that he doesn't know. Gerard returns and says Daphne wasn't there. Samantha asks bitterly what it's all about. Gerard says he can't say, pointing out that she was upset and hit him over the head with a candlestick. Gabriel suggests that Gerard's rendezvous with Edith might have upset her, and wheels out. Samantha asks Gerard what Gabriel means. Gerard asks if she thinks he'd be interested in Edith. He says she's interested in him, but he has no interest in a woman who acts like a complete and utter fool.

Gabriel is in the foyer when Joanna arrives to see Daphne. Samantha and Gerard hear her from within the drawing room, and she tells him to get rid of her. Gerard tells her to remain cool and calm. He goes into the foyer. He tells Joanna that Daphne left, and he doesn't know when she'll return. Gerard tells her that she can wait in Daphne's room. Joanna tells Samantha that she knows the sanitarium send her belongings to Collinwood, and she asks Samantha to get them for her at her convenience. 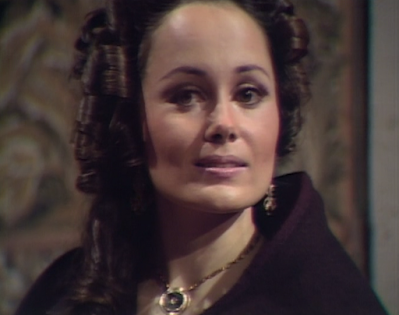 Gerard leads Joanna to Daphne's room, and tells her that he'll be there all night in case there's anything she needs.

Samantha asks Gerard why he let Joanna stay in the house. He advises her not to admit what she did. He assures Samantha that he will protect her. When she says she doesn't believe him, he says that she must. He then asks if she put Tad on a stagecoach to Boston. She says he was upset about his father's conviction, and so she sent him to stay with her family in Boston. He asks if she felt his life was in danger, and she says that he will be back soon. They kiss. 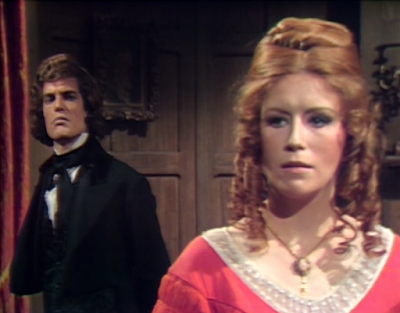 Gabriel tells Daphne that he owes her an apology. He says he just came from the strange room she mentioned. She asks what he saw. He demands that she tell him everything about the room. He asks if Julia and Stokes saw the room change. Daphne tells him that Julia explained that the contents of that room are parallel time. Gabriel asks what that is. She says if he's in the room when it changes, he'll go into another time. She tries to convince him that he can use that room to escape. He says he'll do that after he gets what he wants from Gerard.

Joanna is walking the halls when she hears Gabriel open a door. She goes into a room, and he hides in the shadows, prepared to kill her... 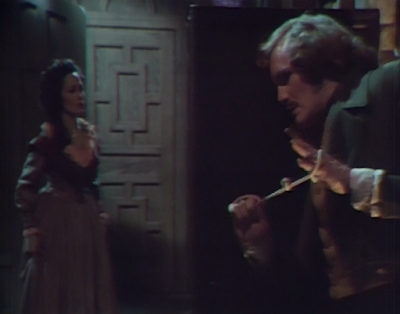 John: Whenever an evil mastermind tells their potential victim their plans, assuming there's no harm in doing so before they kill them, you can all but bet that their decision is going to come back to haunt them.
Christine: Exactly. Especially when they don't kill them right away. Samantha told Gerard that Tad would be coming back soon, but after a little investigation, I see that David Henesy's last appearance was in Episode 1165. It seems he will be safe from Gerard killing him, or else he will be killed offscreen. I wonder if fans at the time knew that he wasn't returning or if they had to read it in Tiger Beat later.
John: I thought Joanna agreed not to meet Daphne at the house. What do you think compelled her to show up at Collinwood late in the night? Gerard was awfully accommodating to just let her stay in her sister's room. Of course that's one more thing that will upset Samantha, so perhaps that was his motivation.
Christine: I think she showed up just to intimidate Samantha by asking for the return of her belongings.
John: So Daphne is not only a parallel time convert, she's plotting how Gabriel can use it to get away with murder (literally and figuratively). The only thing more surprising is how quickly Gabriel was willing to buy the whole concept of parallel time based solely on Daphne's word.
Christine: I actually was surprised she gave up the information so readily and didn't bargain with him to release her if she told him what he wanted to know.