Daphne is in the East Wing when Quentin arrives. They embrace and kiss. She says they can't stay, and they step into an empty room. Daphne realizes where they are and says it's not safe for them to stay in the room, but before they can leave, the room is suddenly furnished. She tells him that they're trapped in another time! Quentin asks her what happened. She tells him Julia described it as parallel time. He recognizes it as the Weisman theory. She tells him there's no way out of the room. They hear voices and hide. They hear a couple named Morgan and Catherine — he tells her he's been waiting a week for her answer. 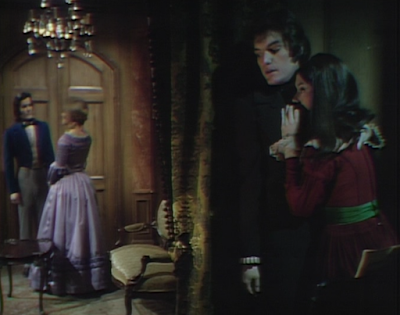 Morgan leaves her, and Samantha knocks on the door. Catherine lets her in and they exchange pleasantries. They discuss Justin Collins, the old man at Collinwood, who hasn't spoken in ten years since he was paralyzed in an accident. Samantha says she knows Morgan has asked her to marry her; and she implores her not to move into the house in case she agrees to marry him. She tells him her conception of the house is far from reality. Catherine asks her why she stays, and she basically says it's the money. 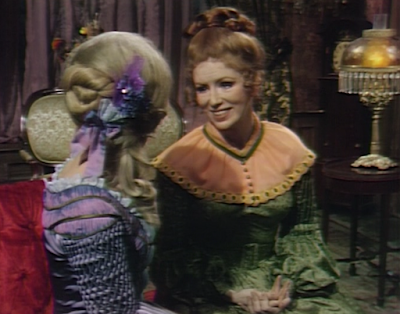 Morgan returns and Samantha excuses herself. Morgan asks if she was giving Catherine advice. He tells her that Samantha has never been fond of her. He tells her he has a headache, and goes towards the room Quentin and Daphne are hiding to get some pills. Catherine stops him, and tells him that she has a better cure for his headache — she agrees to marry him. He tells her that she won't regret it. They head downstairs when the parallel time Daphne comes in. They tell her the news and the room switches back to Collinwood in 1840.

Quentin suspects that the room changed back because the two Daphne's were in the same place at the same time. They leave the room. Quentin is amazed by what they experienced. Quentin tells he that he's going to leave Collinsport, and he wants her to come with him. She agrees. He tells her that it will be a few days before Desmond is ready to travel, and asks her to wait in Collinwood until then. Joanna comes in and tell shim that he had better leave, as Gerard and Samantha has returned. Quentin leaves. Joanna asks Daphne why she's unhappy, since she and Quentin will be together. She says that they'll never be man and wife, assuming that he'll never truly be free of Samantha. 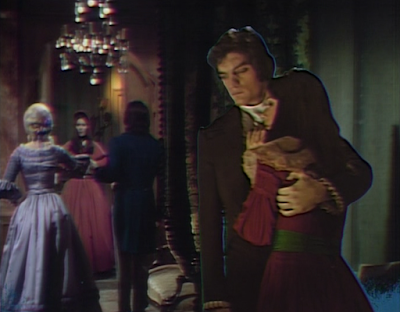 Daphne tells Gerard that it was Gabriel who tried to kill him. Gerard points out that now he's dead, and there's no explanation for it. Samantha returns, unhappy to see Daphne. She asks if she has seen the escaped Quentin. She asks Daphne where she met Quentin in the house. She denies it. Samantha tells Gerard that Quentin is hiding in the house, and he thinks Daphne knows where. Gerard tells Daphne she'll be in serious trouble if she knows where Quentin is and won't talk. Samantha threatens to use force to get her to speak. Gerard tells Samantha there will be no force used. He offers to take Daphne up to her room. Samantha shouts after them that the authorities will find Quentin and he'll be executed.

Joanna goes into the drawing room and closes the door. Samantha tells her to get out. Joanna says that they have never resolved the matter of the notes Samantha sent. Samantha denies any involvement. Joanna spells out what happened, and Samantha says she can't prove it. She admits to doing it, and tells Joanna that she knows she's been trying to lure her into a false sense of security. She tells Joanna that she won't get her revenge — she won't be able to kill her. Joanna asks why she would want to kill her. Samantha says she hasn't forgotten when Samantha pushed her over, and thought she was dead. She pulls a gun out of a drawer, and shoots at Joanna. 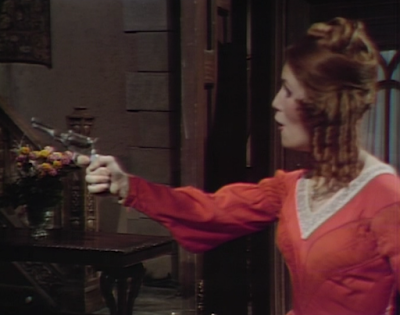 Gerard comes in and sees the two women standing opposite one another. Joanna says Samantha tried to kill her. Samantha says she shot her and nothing happened. She claims Joanna is a ghost. He offers to take Samantha to her room, but she runs past him. Joanna asks him if she looks like a ghost to him, and he says, "not at all." 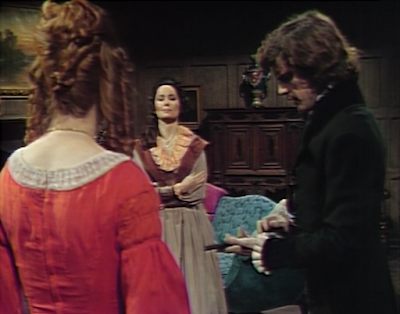 Samantha and Gerard are in the cemetery with a coffin. He asks if she's sure she wants to go through with this, and she says she must know. He opens the coffin belonging to Joanna Mills. It's empty. He says it means nothing. He says the body they thought was Joanna was very badly decomposed. He says that if Joanna is a ghost, why would she look young and beautiful rather than the way she was found at the beach — a decaying mess. He promises that she's heard the last from Joanna Mills tonight. 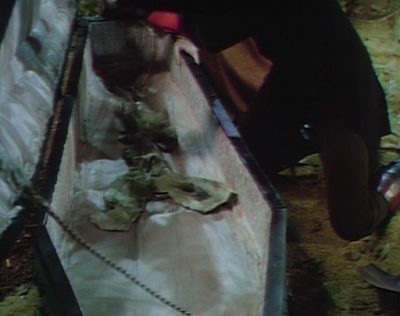 Samantha returns to Collinwood and finds a note from Gerard telling her to meet him at Widow's Hill.

At Widow's Hill, Samantha calls for Gerard. Joanna appears and tells her that she's not the only one capable of forgery. She tells Samantha that she didn't fail that night on the hill; just as she will not fail. Samantha asks how she looks the way she does. She says that she controls how Samantha sees her. She then tells her that she will now see what her body looked like after her body washed ashore months later. Joanna's face is replaced with a skull. 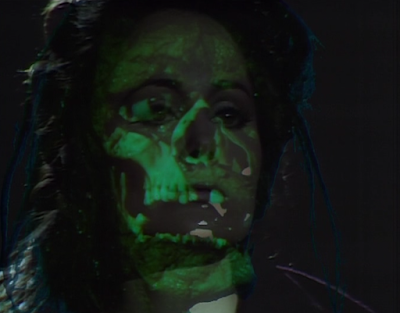 John: Not only had Daphne totally bought in to the concept of parallel time, Quentin is already a scholar of it! Of course he is. Convenient that they were able to pop out of parallel time after basically watching a trailer for the parallel time Dark Shadows! 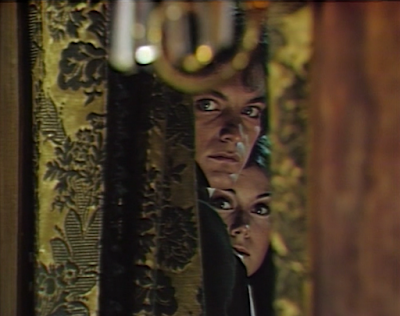 Christine: At least they were consistent with saying that two counterparts could not coexist in parallel time.
John: Good to know that there's a long history of Collins' hiding guns in the drawing room. At first, I thought when Samantha shot Joanna, that would be this episode's cliffhanger, and we'd find out tomorrow that Joanna had reloaded the gun with blanks. But it kept going! And it turns out that the bullets were real, and Joanna truly is a ghost! Imagine if she had admitted that on the witness stand in Quentin's trial! She would have been thrown in jail alongside Quentin and Desmond.
Christine: It would seem pretty futile to throw a ghost in jail.
John: It's pretty much a given that someone doesn't just visit Widow's Hill, they become a permanent resident. I sure hope we get to see Joanna scare Samantha right off the cliff in tomorrow's episode! And while the parallel time blue screen swaps are marred by limitations of the technology, I really liked the in camera effect used to project a skeletal image on Joanna's skin.
Christine: I was surprised that Samantha fell for the obvious forged note. As if Gerard would leave a note signed, "Love, Gerard." I was a little disappointed by the superimposed skull. I think we've seen better on the show before.
Posted by John Scoleri at 6:00 AM