A carousel spins inside the playroom in some time band. 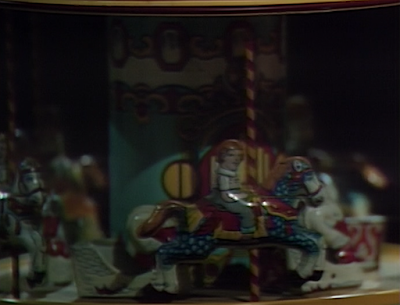 Barnabas comes downstairs, surprised that they didn't find a playroom upstairs. He hears someone crying in the drawing room. He goes inside and finds Carolyn. She says it's good to see him again. He asks her why she's crying. She explains that she has trouble sleeping. She says she still thinks about Jeb, and may never get over his death. She says she thought about him often while he was away. She asks about Jeb's counterpart in parallel time. He says his counterpart was Cyrus Longworth, a good, well-meaning man. Barnabas asks her if she's ever heard of Rose Cottage. She says no. He runs other phrases by her, but she says she's not familiar with them. 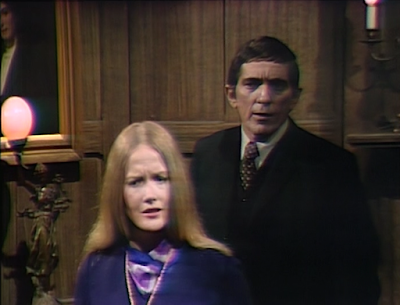 Hallie comes to see David. She tells him that something terrible is going to happen. She says she heard them talking about a disaster that was going to happen. She says Elizabeth was upset by it all. She tells him that she feels like someone is watching them. Barnabas steps in and asks her who she thinks is watching them. She says she doesn't know. She says it's just a strange feeling she has. He asks if she's afraid of him, and she says he just seems different. She asks to go and leaves the room. David says she's just not used to the house yet. David welcomes him back to Collinwood. Before he goes downstairs, Barnabas asks David if he knows of Rose Cottage. David does not. 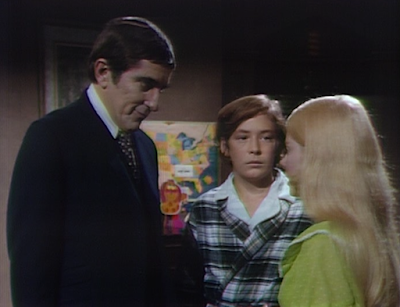 There's a knock at the door, and Carolyn answers. It's Professor Stokes. Hallie is glad to see him. Barnabas starts downstairs as Carolyn takes Hallie up to bed. Barnabas and Stokes exchange pleasantries. Barnabas brings up Stokes' counterpart in parallel time, and that he almost cost him his life. They retire to the drawing room. 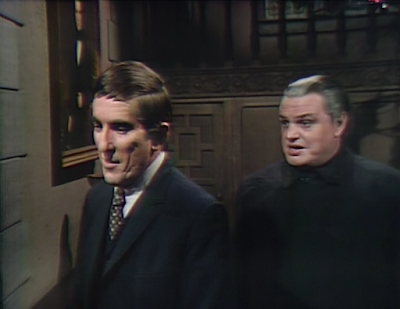 Carolyn and Hallie stop by David's room to wish him goodnight. In the room, she says there's someone else in the room with them; watching them. Hallie says that she was right, and tells Carolyn that she's scared. Carolyn assures them that she won't let anyone hurt them. David says they both just imagined it. Carolyn apologizes and tells Hallie that David is right. 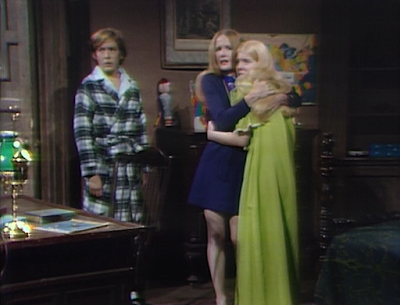 Stokes tells Barnabas that his story is astonishing. He asks if Barnabas recognized the ghosts. Barnabas says only David—not the man or woman. He says that Quentin referred to the boy as Tad, not David. Barnabas says the David and Hallie they saw in 1995 were dead. Stokes says they don't know when. Barnabas suggests that Stokes cancel his trip to Europe. Stokes says he has no plans to go to Europe, and Barnabas says his 1995 counterpart says he was. Barnabas points out the Hallie is high-strung. Stokes wonders if he should take her away from Collinwood. Barnabas says it's best that she stay, so as not to alarm Elizabeth. 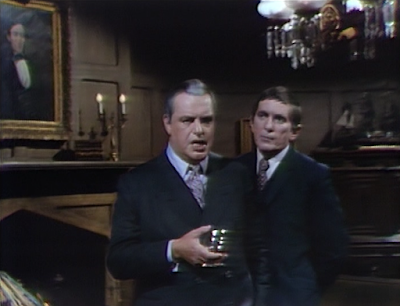 Barnabas runs into Carolyn in the foyer and asks if the children are in bed. She mentions the feeling she had upstairs, and says that she felt he too was disturbed earlier. He suggests that she go upstairs and get some rest. 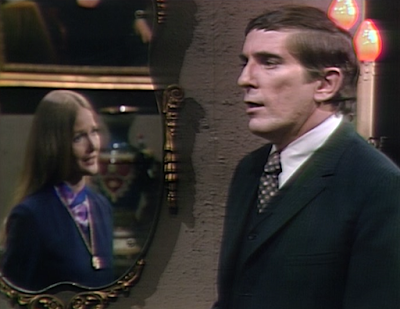 David dreams of the carousel. He finds it in the foyer. Hallie startles him, and he asks her why she's dressed funny. David tells her to stop clowning around. He follows her into the drawing room, but she's not there. He returns to the foyer and the carousel is gone. He sits up in bed. 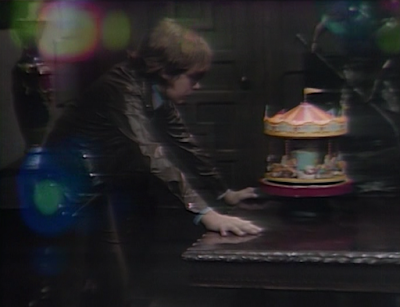 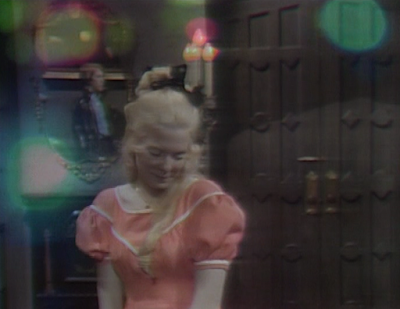 Carolyn finds Hallie roaming the halls and sends her back to bed. Hallie goes back into her room and is surprised to find an old-fashioned outfit lying on her bed. 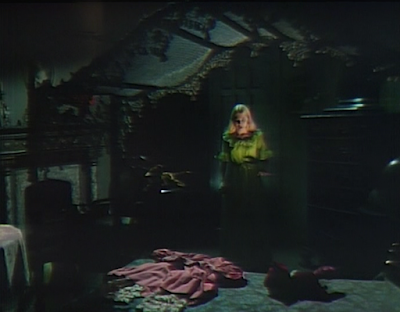 John: Perhaps I'm just getting impatient after so much time away from Collinwood, but Carolyn bringing up Jeb served as a reminder just how much has transpired since we were last in our own time surrounded by familiar faces. I can't even remember how Quentin's arrival was explained away, and now it seems as if he's just a regular part of the family who has been around since the very beginning.

Christine: Those were pre-pandemic days, so it seems an especially long time ago. To refresh your memory, I'd refer you to Episode 958, when Quentin employed the Barnabas technique of claiming he's the spitting image of his ancestor of the same name when first meeting Roger. If you'd like to remember how Quentin showed up in this time period, you need to go back to Episode 905, when he appeared as Grant Douglas and was run over by Leviathan Barnabas because he was hitting Carolyn up for a date. Lest you forget, Angelique put a love spell on Quentin and Maggie in Episode 955 after Barnabas gave Maggie Josette's ring, so we have yet to see if that has worn off, or what Angelique has been up to lately.

John: As dream sequences go, today's was about as boring as they get. I'm beginning to fear that there's a West Wing portal in Collinwood that's going to send us back to an alternate past before too long.

Christine: The appearance of period clothing is a sure sign that a trip to the past is inevitable. The question is whether or not we'll have a chance to get our bearings in our original time period before we are whisked away to another time.

John: Do you think Hallie is a replacement for Amy? It seems like they very easily could have used Amy for these story points, which makes me wonder if we've seen the last of the Jennings clan in Collinwood.

Christine: It would seem to indicate that Amy is no longer at Collinwood, though I certainly hope they're going to explain what happened to her at some point. Considering that Barnabas was putting the bite on Sabrina in Episode 978, it would make sense if Chris decided to take her and Amy out of Collinsport. If that's the case, then it's too bad Quentin didn't have the chance to get to know his grandkids and help out his lycanthropic grandson. That could have been interesting to see. 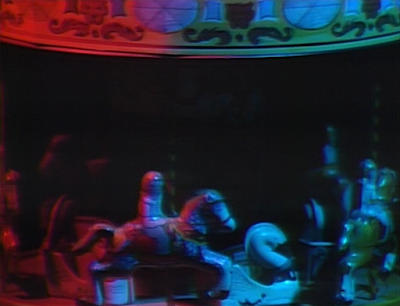