Elizabeth comes downstairs, calling to Julia that they must get the children out of Collinwood tonight. When she swings the drawing room doors open, she comes face to face with the ghost of Gerard. She asks who he is and what he's doing in the house. He reaches towards her and she tells him to stay away, but he just closes the door behind her. 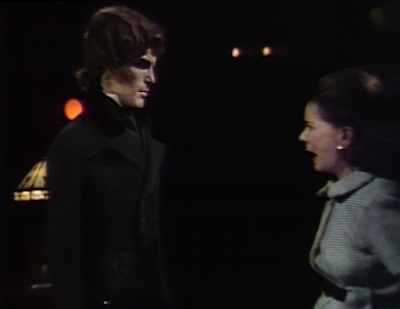 Hallie tells David to quit thinking about it. He wonders why they haven't seen any of the ghosts in the past few days. He says there's a reason. Hallie asks if it's because they haven't been to the playroom, and he says if they wanted them to do that, they would have. Hallie asks if they're really free. He says they can find out. He says if you stand on someone's grave at midnight, you can tell if their spirit is at rest. He says he's going to stand on Gerard's grave tonight. She says she doesn't want to come with him, but she won't let him go alone. 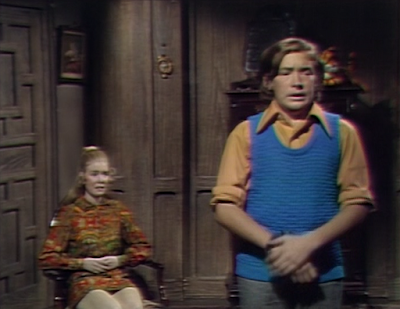 Gerard reaches out and touches Elizabeth's face. She appears to be in a trance, and says she understands everything, and the children will not leave the house. 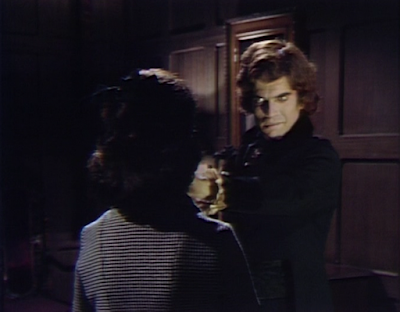 As she says she knows what must be done, Julia approaches the drawing room and enters. She asks Elizabeth who she was talking to. She says she startled her. She explains that she was on the phone with her lawyer. Julia doesn't believe her, sensing evil in the room. Elizabeth says the idea of spirits in the house is the figment of someone's imagination. She says her horoscope has convinced her that they are not on the brink of a catastrophe. Julia asks about yesterday's message, and Elizabeth says it has no meaning. Julia recommends removing the children, and Elizabeth assures her that they are safe. 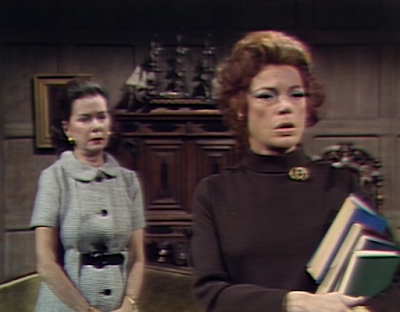 Julia says she found information on a ship called the Java Queen, like the model David found in the attic. She says the real ship was shipwrecked near Collinsport on this day in 1840. Elizabeth says it's a fascinating coincidence, and leaves the room. Julia is sure that it's more. She doesn't notice as David and Hallie sneak out the front door. Julia continues reading about the Java Queen, and how the crew perished but the unknown captain was believed to survive. He vowed to unite his evil followers in death to kill and plunder once more. 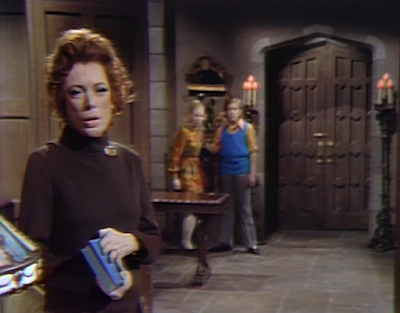 David and Hallie arrive at Gerard's grave. Hallie says she wants to get over it and go home. He says it's not midnight yet. David points out a locked off area where criminals and misfits were buried hundreds of years ago. He says their souls had no place to go. Hallie says it's almost twelve. He points out that it's 10 seconds away. Lightning crashes and Hallie asks if they can go. They see the ghost of Gerard standing nearby, staring at them. He approaches them with his arms outstretched, and they run away. 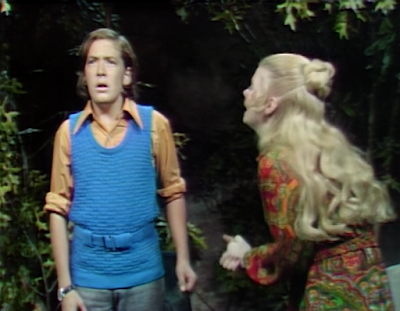 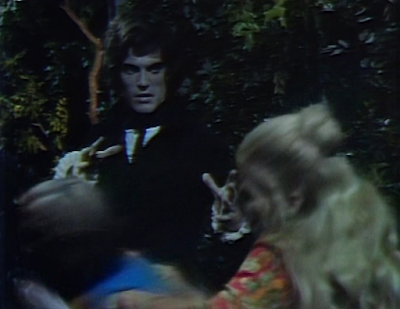 Back at Collinwood, Hallie says that now they know. They sneak in the front door, seen by Julia. She asks them what they were doing outside. He says they were just walking. She points out that no one goes for a walk near one in the morning. He threatens to tell his aunt, and he begs her not to. She tells them to join her in the drawing room to tell her about it. He says they were talking in his room, and then David wanted to show Hallie a constellation. Julia doesn't buy it. David begs her not to tell his aunt. Julia tells Hallie that she thinks they know more than they admit. She says they're on the same side, and she won't tell Mrs. Stoddard. David takes a note from the book Julia was reading. She sends them upstairs. Julia is sure they know more than they're telling, and doesn't know how to get them to admit it. 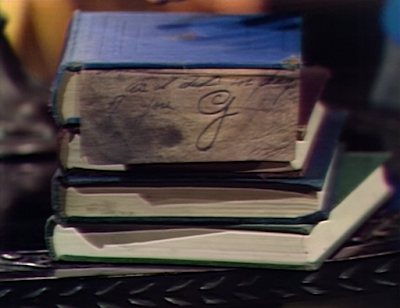 As she starts upstairs, she sees Elizabeth at the top of the stairs, placing the bust that almost killed her in 1995. She asks Julia if she likes it. Julia asks what made her decide to place it there, and explains that she was almost crushed by it in the future. Elizabeth doesn't get the relevance. Julia tries to explain that the bust was there in the future because she just placed it there. Elizabeth tells her that she and Barnabas need to forget about 1995. 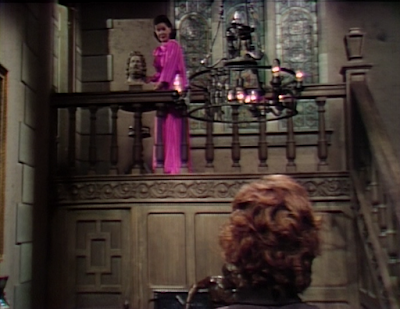 David reads the note from Julia's book. He says it was signed with the letter G, which he assumed was Gerard. It speaks of watching for a green flag in the window at Collinwood as a sign. David says they must do something to please Gerard. He says he'll go to the tower room and if he finds a green flag, he'll wave it three times. 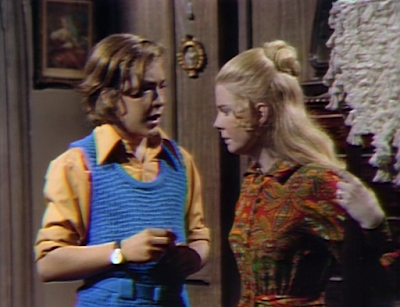 David enters the tower room with a candle. He looks around for a green flag. He finds it, and goes to the window. He opens it and waves the flag two times, calling to Gerard that he's following his instructions. 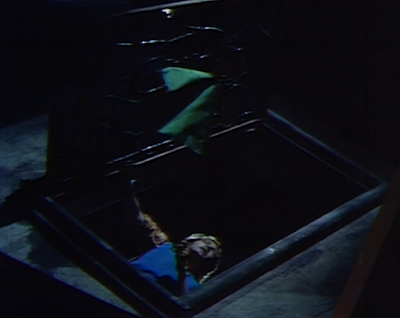 In the graveyard, the earth begins to move. 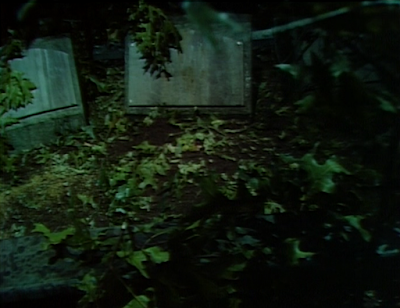 John: Still no words from Gerard, but he was able to possess Elizabeth. That can't bode well for anyone in the house. Do you think he'll be snarling all the time in 1840? Or just when he's not talking? 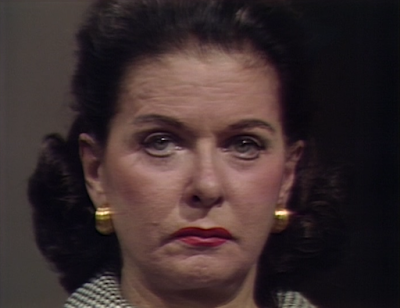 Christine: I really think you need to give up on the notion that you're ever going to hear Gerard the angry ghost speak. If Gerard was the pirate we're being led to believe he was, then I expect lots of snarling and maybe a few ARGHs in 1840. If we're lucky, maybe he'll delight us with an "ARGH, matey!" 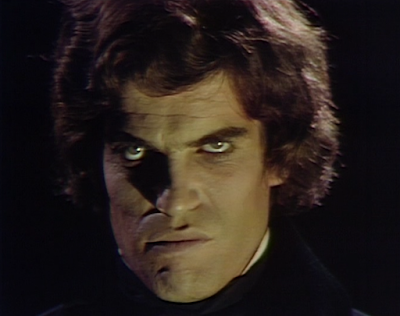 John: It's pretty silly to believe that David found a note from Gerard in one of Julia's books before she would have had a chance to read and interpret it. The writers should have planted it in the Java Queen model.

Christine: Yes, that would be silly, except the note wasn't in Julia's book while she was holding it.  I think we are supposed to assume that Gerard snuck it in the book purposefully so David would find it and wave the green flag to wake his dead army.

John: The zombies are coming back to Collinwood! Too bad they won't be rising from the ocean, Zombies of Mora Tau-style... Will they bring about the death of the children and the destruction of Collinwood? Where's Quentin? And do you think Barnabas will be back in time to stop them? Or is he going to miss out on all the fun? 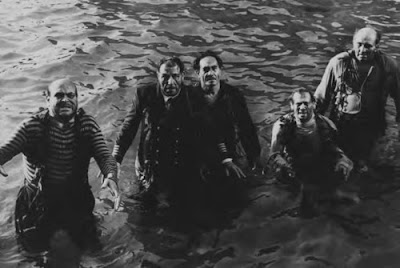 Christine: Barnabas who? I think David's garish blue vest has aligned him with evil, since he seemed so eager to do something to please Gerard. How cute that David held Hallie's hand for the first time while standing on Gerard's grave. 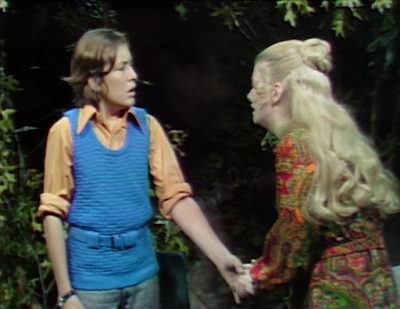 Why all the cloak-and-dagger stuff? Julia should just call them out on it: "Look, I know you kids have been visited by two ghosts from the 1840s in a magical playroom that randomly disappears when you use an enchanted stairway into time, so don't give me any strange unbelievable stories."

LOL! Of course if she did that, the destruction of Collinwood would be averted and the writers would be forced to stretch themselves to come up with a new storyline.