At midnight, David sneaks out to the gazebo. He sees Hallie wearing the dress from his dream. He tells her that she's not Hallie, but the girl from his dream. He asks her who she is, but she doesn't speak. He asks if she's Hallie, and then she asks him what she's doing down there in the dress. He says she wrote him a note to meet her, and shows it to her. She says she didn't write it, and asks who did. He asks how she knew to come, and she says she doesn't know. She said she was going to bed when she saw the dress. He asks where she got it, and she said it was lying on her bed before he had the dream. He asks how he could have a dream about a dress before he ever saw it. 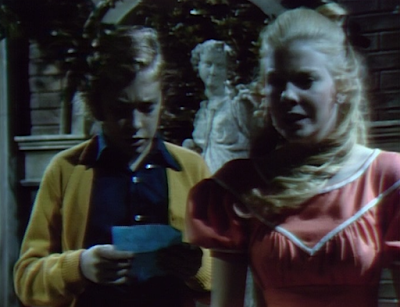 She says she didn't know where she was going when she left the house, until she got near the gazebo, and knew that's where she was meant to come. He says someone else wanted her there, and he'll wait and find out who it was. She reminds him that earlier, someone was watching them, and that person wasn't real. She asks if he smells lilacs. He says it's too late for lilacs, and then agrees he can smell them. She goes to run away, and tells him not to stay. He says he's going to find out who wrote the note. She goes, leaving him alone. 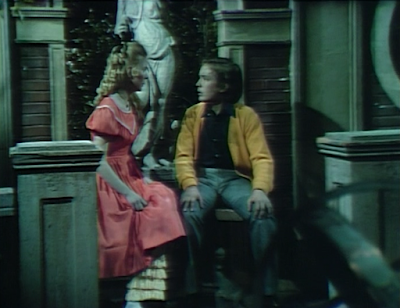 Carolyn reads her horoscope to her mother. Elizabeth asks if she believes in such things. 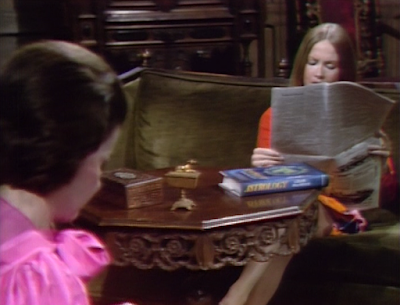 Elizabeth mentions Jeb, and Carolyn says she doesn't want to talk about him. She bids her mother goodnight.

Hallie is in her room wearing the dress when Carolyn comes in. She asks her about it. Hallie says she found it in a trunk upstairs. Carolyn asked why she put it on in the middle of the night, and Hallie says she doesn't know. She starts to make up a story, and Carolyn asks her if everything is alright. She says she has trouble sleeping sometimes, and has to stop thinking about the accident. Carolyn reminds her that she lost someone that she loved recently, too. 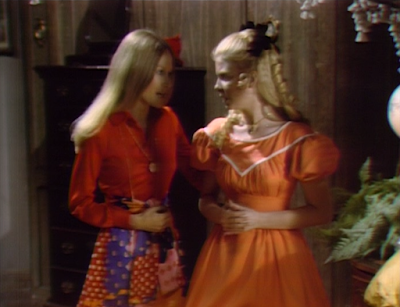 David waits by the gazebo, and realizes that no one is going to come. He decides to wait a little longer.

Hallie lies in bed, dreaming. A door opens in her room and David walks through, wearing old-fashioned clothes. He says nothing, and she asks him what's wrong. A woman enters, and Hallie asks David who she is. She reaches out to Hallie, who tells her to stay away from her. She backs away from the woman, screaming. 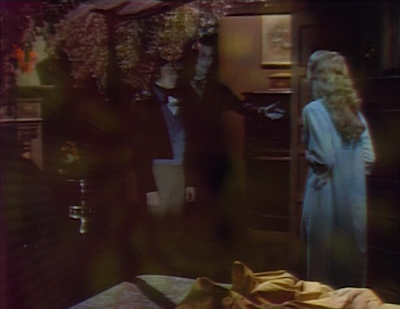 David smells lilacs once again. He turns and sees a ghost materialize. He asks who she is, and she disappears. 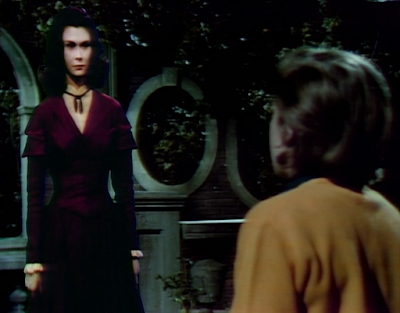 David knocks on Hallie's door in the middle of the night. He comes in and says that he saw the woman in the gazebo. He says he thinks she's the one who wrote the note. Hallie asks if the woman had dark hair, and he says yes. She asks who the woman is, and what she wants. He says he doesn't know. He tells her that she was a ghost, but he wasn't scared. He asks her why she's not surprised. Elizabeth comes in and asks what David is doing in Hallie's room. He says he's planning what they're going to do tomorrow. She asks what, and he says he's old enough to have secrets, and storms out. 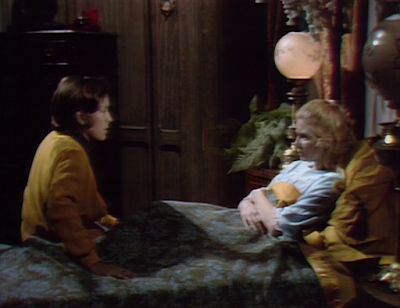 Carolyn tells Elizabeth how she found Hallie wearing an old dress. She wonders if it has anything to do with what Barnabas described. There's a knock on the door and Carolyn is shocked to see Jeb. She says it can't be, and he says he's not. Elizabeth tells him it's Sebastian Shaw, and she runs upstairs. 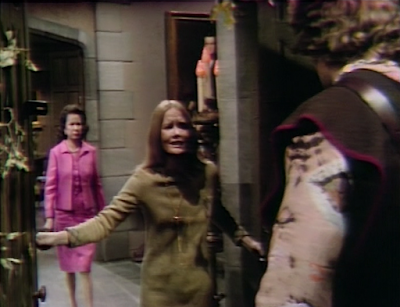 Elizabeth explains that he resembles her daughter's late husband, and invites him in. He has her horoscope, and she leads him into the drawing room. She asks him what it says, and he tells her that would take all day. She asks if she's going to live through a disaster, and if her nephew David will be alright, or if they're going to leave Collinwood. He says it was an interesting chart to draw up. She has a propensity for the occult. She says she has no psychic powers, and he assures her they all do. He says Neptune may interfere with her intuitive gifts. She asks him again for a price, and he asks her not to make a shopkeeper out of him. As she goes to write a check, he says he's not infallible. If her experiences are different, he will adjust her horoscope. She hands him a check, which he takes, and leaves. 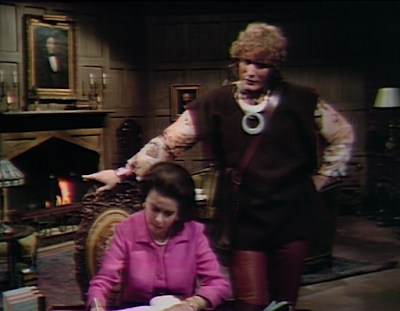 David shows Hallie a note he found in the attic from 1840 with the same handwriting as the note he found telling him to go to the gazebo. She asks who Abner Collins is, and reads a reference to a playroom. David says there's no playroom that he knows about. He tells her to come with him to look for it. 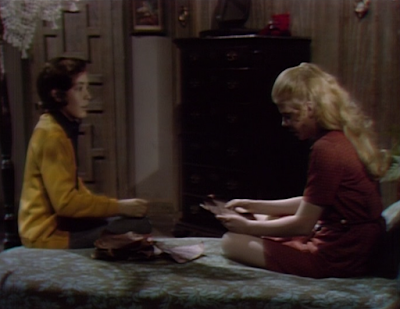 David finds a portrait of Abner Collins. He opens a door to a closet. They step inside, and hear music playing behind the wall. Hallie tells him they should leave. She smells lilacs, and they see the woman appear before them. Hallie screams and runs away. The woman fades away. 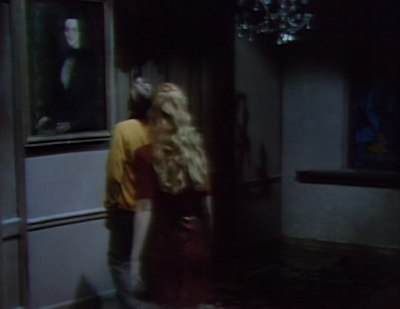 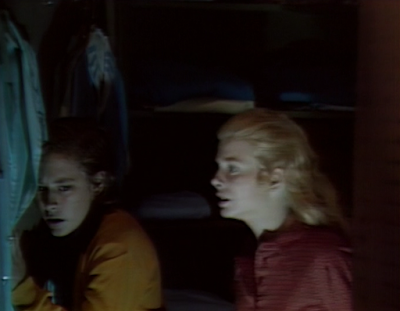 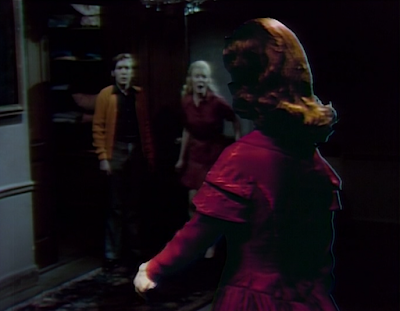 The carousel continues to spin in the playroom... 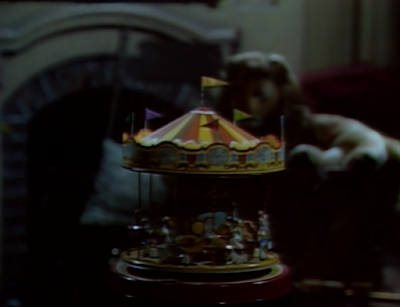 John: So funny how they managed to cleanse the palate of Jeb Hawkes with Cyrus, and now with Shaw, we're right back to the creepy, sleazy character we thought was gone for good.

Christine: You may think he's creepy and sleazy because he sounds just like Jeb Hawkes, but I think he may be trying to be more esoteric with all his occult and hipster accessories. How long before the Swiss 1JJ tarot comes out? I was happy to see that Carolyn's horoscope was fulfilled so quickly: "Beware of unexpected meetings and sudden shocks. Conserve your energies for a more fruitful day." 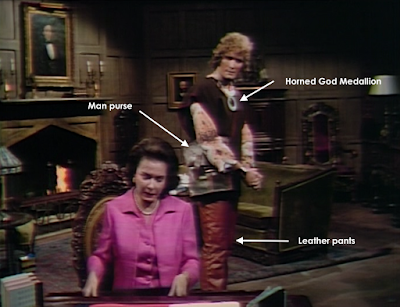 John: Do you think Tad and Carrie are related to Daphne? It seems like she died too young to have any children that old...

Christine: I have to believe she was just another in a long line of doomed governesses. It was nice to receive a confirmed identification of the playroom portrait. Welcome, Abner Collins! John: So Shaw truly is the spitting image of Jeb. Now that Carolyn has seen him, how long until we can expect them to begin dating?

Christine: She has to finish mourning first. I'd give her until next week.