David and Hallie return to the playroom. She tells him they have to be careful what they say, and though they can look around, they can't say anything about the notebook. They open the door and see Tad and Carrie reading from it. Hallie asks David to tell them that they would help them if they could. He tries, and they disappear. 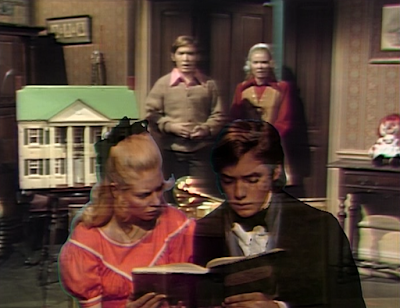 Hallie asks him what happened. He sees the notebook on the table. He opens it up, and they sit in the chairs where Tad and Carrie were sitting. They become Tad and Carrie. She asks why they would be afraid of Miss Daphne. He tells her that he supposes they frightened them. She asks why they'd think that, since they're so fond of them. He says they should ask Miss Daphne to explain it. They go to leave, and he says that he thinks David and Hallie had been there, and wonders where they went. They leave the room. Quentin walks by with some books. 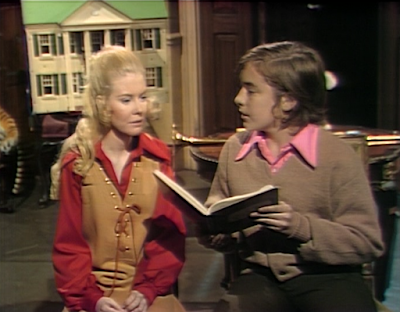 Quentin brings the books to Julia in the drawing room. She says she's given up on Rose Cottage, but now she's interested in finding the staircase that she and Barnabas used to return from 1995. She says if she can find it, it could lead to a clue that could stop the disaster. Quentin offers to help her, and picks up a book. She suddenly finds a blueprint titled 'Proposed Stairway Into Time,' signed by Quentin Collins in 1840. 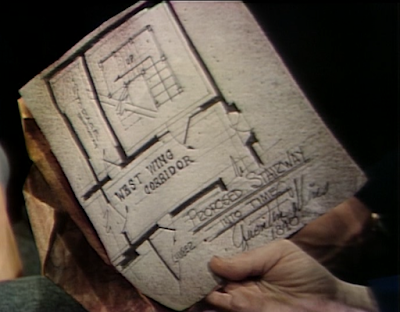 Tad and Carrie go to Daphne's room. They find a picture. Daphne enters, and Hallie explains they were looking for her. Daphne takes the photo from Tad. They explain that David and Hallie wrote things down that they don't understand. He hands her the notebook, which she closes and gives back to him. He asks what they should do with it, and she hands him a candle. He asks if she wants them to burn it, and she nods. They light it on fire and it goes up in a burst of flame. They asks Daphne if they'll be able to talk to David and Hallie soon, and she nods. They hear voices in the hall. 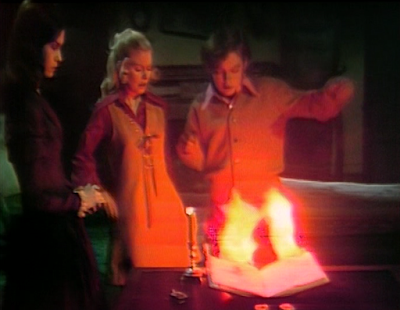 Julia and Quentin return to the corridor where she and Barnabas returned from 1995.

Daphne touches Tad and Carrie's faces, and as she disappears, they return to David and Hallie. They hear Quentin and Julia.

Julia points out the door to the playroom. Quentin assures her that it's a door to a closet. She opens it, and confirms that he's correct. Julia asks him about the door on the opposite side of the hall. Quentin says if they open every door they come to, they'll never finish. They open it and look inside. He points out that it's another bedroom. He tells her that there are surely more plans downstairs. She wanders around, looking for a stairway to time... 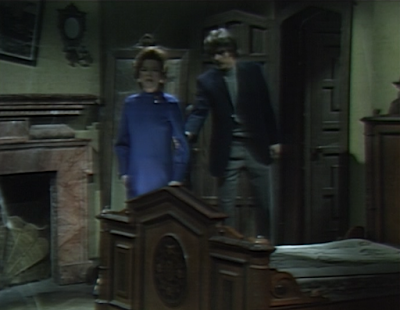 They leave, and David and Hallie step out of the shadows. Hallie asks why can't they just tell everyone the truth. He tells her not to get hysterical. Hallie points out the burnt notebook. 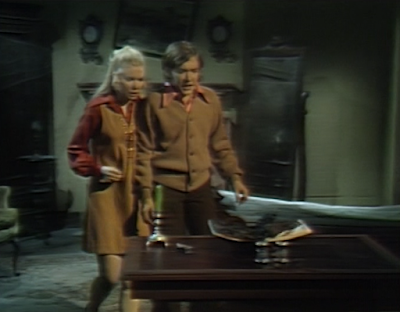 Quentin offers to look for more plans or books for Julia. In the foyer, he smells lilacs, and decides to go looking for Daphne.

Hallie says Julia was talking about a stairway to another time. They hear footsteps and hide in the shadows. They watch as Quentin returns to Daphne's room.

Quentin finds Daphne's ghost in her room, waiting for him. She extends her arms to him, and he refuses her. He asks about her power over him, and why he can't tell others about her. He explains that he can't keep lying to his friends. He tells her that he must never see her again, and starts to walks out on her. At the door he stops, turns, and returns to her. He kisses her, and says he should have known that he'd never be free of her. She gives him a book titled the thoughts, words and deeds of Quentin Collins, written in 1840. She disappears and he asks if she's trying to help them, or destroy them. 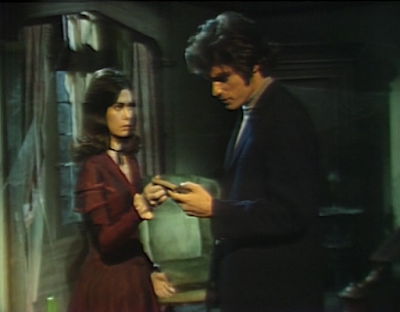 Julia finds Quentin of 1840 to be strange as she flips through his book. David and Hallie hear them talking as they approach the drawing room. They suddenly hear Tad and Carrie's voices, and rush back to the West Wing.

Julia reads Quentin's extrapolations on time... and how he plans to build a stairway to move through time. Quentin tells her that he was mad. 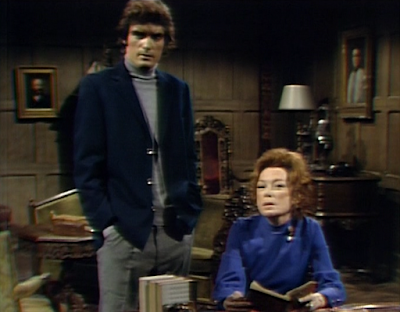 David and Hallie open the playroom door, where they find Carrie and Tad begging them to come through and join them. 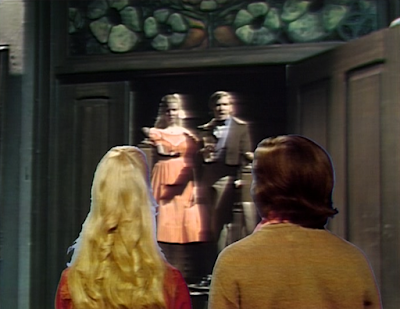 John: How convenient that Julia would lay her hands on Quentin Collins' 1840 plans for a stairway into time! So we're clearly now in an alternate history of Collinwood, right? Pretty much everything before we entered into the parallel-time blender seems to be gone for good (and not necessarily the better).

Christine: I don't know where the heck we are anymore, though if there's a stairway into time in the house, why did 1840 Quentin create it, and where did he go with it? 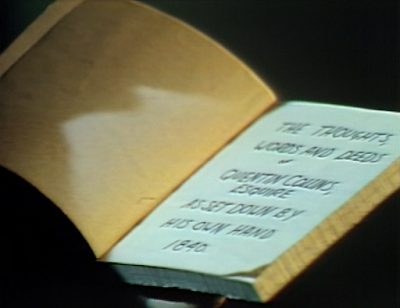 John: Why is it that Daphne the Friendly Ghost won't talk to ghostly Tad and Carrie? Do you think there's some rule about only speaking to people in the future who look just like you? Because those kids won't shut up!

Christine: Perhaps it depends on how they all died. The silent ghosts tend to be more surly and vengeful. The kids don't seem to be bitter or upset about being dead.

John: Even if they couldn't see the kids hiding in the shadows, wouldn't Julia and Quentin see or smell the freshly burnt notebook when they waltzed into Daphne's bedroom? Once again, it seems like the writers are playing fast and loose with logic. I'm guessing we're in for a rocky road over the next seven months...

Christine: They should at least smell the accelerant used on it. It looked like David Henesy and Kathy Cody got a genuine fright when that book exploded after it appeared to be sputtering out. It's kind of like what we'll end up seeing in the next seven months...