Barnabas calls to Shaw as a woman enters who he recognizes as Roxanne! She asks him if they no one another and he's speechless. She asks who he is, and he tells her that he's Barnabas. He mentions that he knew someone that looked like her named Roxanne Drew. She's fascinated, because that's her name, too. She asks him about his Roxanne, and she says she sounds like an astral twin that Sebastian told her about. She says she wants to meet his Roxanne, and he says it won't be possible, but she makes up for the fact that she's not there. 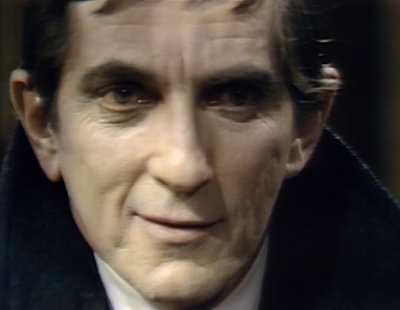 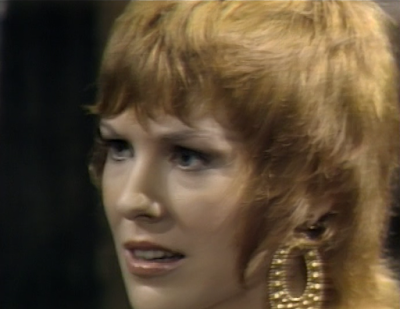 She asks him if he's waiting to see Sebastian, and he tells her that he's meditating. Barnabas asks if she'll help him convince Sebastian to complete his cousin's horoscope. She says he won't do it. He asks if she'll finish it, and she explains that it wouldn't be right. He tells her that he'd like to see her again to discuss astral twins. He invites her to a late dinner, and she says she'll meet him at 10pm. 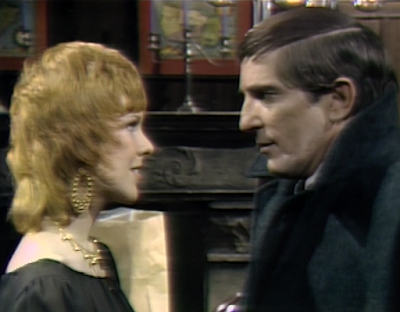 Hallie finds Julia in the drawing room, looking at old tax records. Julia says they're tax records from 1840, and she's researching Rose Cottage. Hallie asks her why it's so important to find. She says she's working on a book on Collins history. Hallie asks her if that's the only reason, and Julia asks her what other reason there could be. Hallie sees Daphne in the room, who beckons Hallie to follow her. She wishes Julia good luck and leaves, following Daphne. 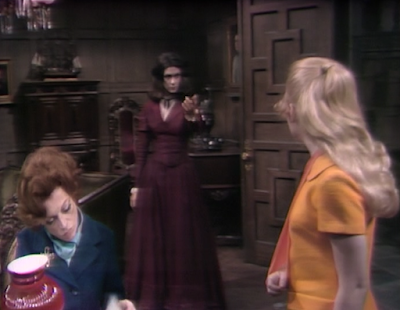 David finds the Java Queen boat in his room again. Hallie comes in and he says he thinks it's a model of a real ship. She says he's seen it in the harbor. He realizes that she's Carrie now. She tells him she's always Carrie. She laughs and says that downstairs, Julia's trying to find Rose Cottage, but she never will. David asks her why, and she says he knows. He tries to get her to tell him, and then calls her Hallie. It upsets her. He shakes her, and she asks him why he was doing that. He tells her that she's been near the playroom again. She says she wasn't; that she was in the drawing room and saw Daphne. From there she doesn't remember. David says they may have to do what Daphne says. Hallie is concerned that they'll be Carrie and Tad all the time. 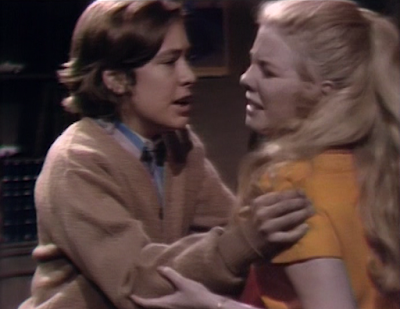 Julia finishes her work as the phone rings. She answers it, and it's a call for Barnabas. The woman says it's Roxanne Drew. Julia tells her it's Julia, and Roxanne explains that she must have her confused with the other Roxanne. She leaves a message that she won't be available to have supper with Barnabas. After she hangs up, Barnabas arrives at Collinwood and tells her the most incredible thing has happened. He mentions Roxanne, and Julia says she just called to cancel their dinner arrangement. Barnabas assumes Shaw is to blame. Barnabas assures Julia that it's his Roxanne. Julia asks him if he remembers her from parallel time, and says she doesn't know this Roxanne. He is adamant that she is his Roxanne. Julia says they'll have to wait and find out. 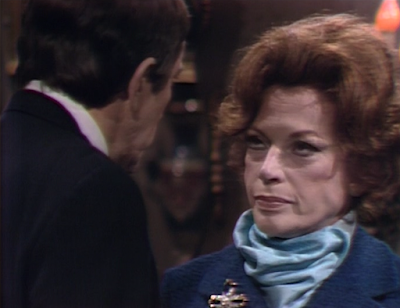 David tells Hallie they could research who owned the Java Queen. She smells lilacs, and then they see Daphne in the room. David asks if she could tell them about the Java Queen and Rose Cottage. He asks if they'll ever find out about it, and Daphne smiles and nods. David asks if she'll show them Rose Cottage now, and she shakes her head no. Daphne takes out David's pajamas and turns down his bed. Hallie says it's as if they're going to become Tad and Carrie. He notices that Daphne has disappeared. 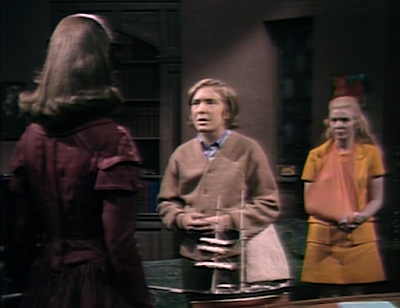 Roxanne is just chilling at Sebastian's when Barnabas arrives to see her. She assumes that he didn't get her message. He tells her that he did, and hoped to change her mind. She doesn't. He asks her if she's available the next night, or the following. He finally asks when she's next available, and she doesn't respond. He finally gets it. She explains that she's not free to go out much, and offers her hand, which he kisses. He tells her that they shall see each other again. 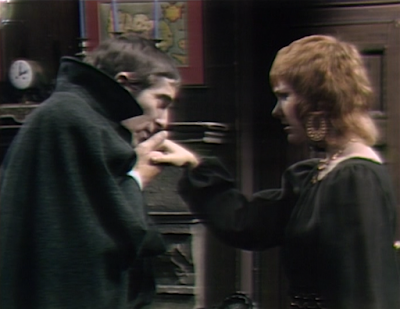 David is sleeping, and dreams of Hallie. She says they're at a birthday party at Rose Cottage. They go into a room where mannequins of Tad and Carrie are sitting at a table. Hallie tells him it's Gerard's party. David asks who Gerard is. Hallie tells him to sit down and when he does, they see Daphne outside the window, laughing. It appears that she's looking in on them in a doll's house. David wakes up. 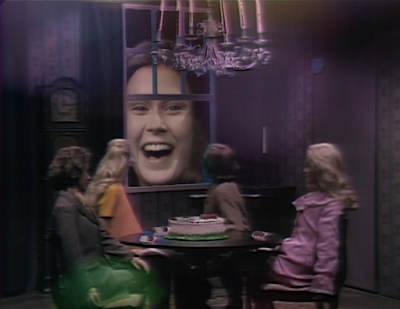 David finds Hallie outside the playroom, and she describes the same dream. They go inside and find a doll house—which looks like the room where they were in the shared dream. 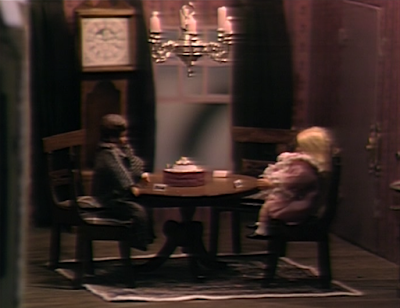 John: An astral twin? Really? Four years in, I'm willing to accept just about anything Dark Shadows throws our way, but isn't it a bit of a stretch to assume that an astral twin would also have the same name? Do you think Roxanne knew where she was supposed to meet Barnabas by reading her horoscope? Or should he have gotten the message when she agreed to meet him without specifying a destination, that she was never planning to be there? 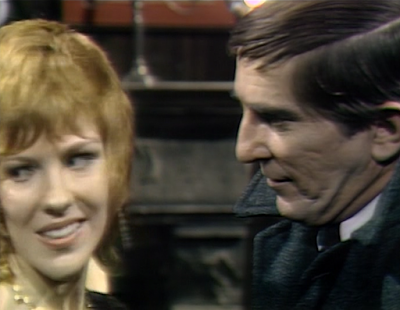 Christine: I think the look on her face should have been enough for him to get the message. He might also consider that she's bringing groceries to Sebastian's hip pad because she's shacked up there with him and they've got a thing going on.

John: Poor Julia. She's been too busy to spend any time hitting on Barnabas, and now the competition is back in town. And he's pretty much demonstrated that he's blinded by love, once again... 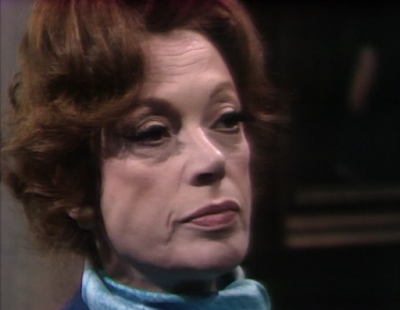 Christine: It's got to be frustrating watching him chase after another pretty, young thing that has no interest in him. Barnabas really needs to take a look in the mirror. Oh, wait... well, that explains everything.

John: The doll house dream sequence was pretty cool... Do you think that Rose Cottage is the doll house itself? Sadly, I'm expecting that once all of the things referenced in the Catastro-tracker have been identified, we'll confirm that they were all seemingly intricate, yet with no substance, like a Damon Lindelof screenplay. 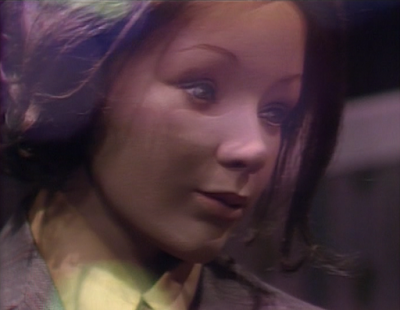 Christine: Scary mannequins! Yes, it would seem the doll house is the Rose Cottage from their dream, but we can wait to see if we get definite confirmation tomorrow before we check it off. It seems that each clue that gets ticked off the list indicates a deepening possession of the children, reaching a point of no return once they've all been checked off.