Julia hears Maggie return to Collinwood. She nearly collapses going up the stairs, and Julia notices bite marks on her neck. She helps her into the drawing room and tells her that she can help her. Maggie starts to speak of the woods, and Julia tells her not to talk. She says to herself that she should have known that it would happen. Hallie comes downstairs and asks what happened to Maggie. Julia yells at her to go back up to her room. Hallie asks why it had to happen to Maggie, saying she hasn't done anything wrong, before running upstairs. Julia helps Maggie up to her room. 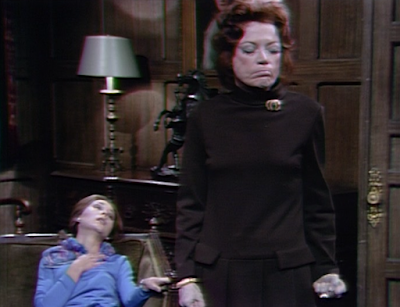 At the old house, Barnabas is reading a book when Julia arrives. He asks her what's wrong, and she says he knows very well. He asks if it's the children, and she asks him why he did it to Maggie. Barnabas is confused. She tells him he can't possibly get away with it, and he demands her to tell him what happened to Maggie. She says he can't possibly get away with his attack on Maggie tonight. He asks if she's absolutely sure he was attacked by a vampire. Julia says she saw marks only he could have made on her neck. He swears he didn't do it. She asks how he can deny it, and he says he can deny it because he didn't to it. 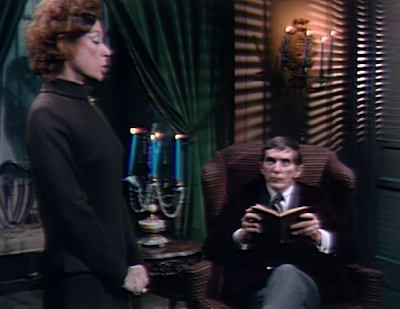 He tells Julia that he never lied to her. He says there must be someone nearby with the same curse he has. She says they surely would have known if there was another vampire around. He points out that Maggie was with Sebastian, who is new to Collinsport. Julia reminds him that she has seen Sebastian during the day. She says she wants to believe him. As a rooster crows, he tells her to stay with Maggie, and he'll find out whoever is responsible tonight. 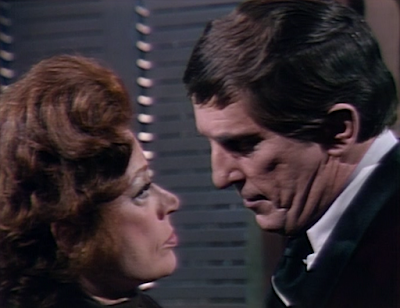 Hallie tells David what she saw. She says Julia told Elizabeth that Maggie was attacked by a wild animal, but she thinks Gerard is responsible. David says she should go to Maggie to find out what she can. Hallie asks him to promise her that he won't try to contact Gerard. He tells her to go to Maggie. After she's gone, David realizes that it may be dangerous, but for Maggie's sake, he has to try to contact Gerard. 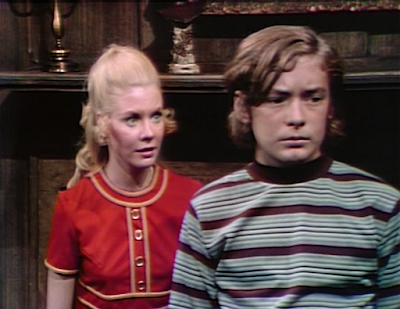 Hallie asks Maggie how she's feeling, and she says she'll be alright. She tells Hallie that she and David need to keep up their lessons. She tells Hallie that she's good, and Hallie responds that sometimes she does things that she shouldn't, and is worried Maggie was hurt because of her. Maggie says she was attacked in the woods, and it has nothing to do with anyone else. Julia comes in and tells Hallie that Maggie needs her rest. After she leaves, Maggie tells Julia that she doesn't need to stay with her all the time. Julia says she has nothing else to do. Maggie mockingly states that she thought she and Barnabas needed to search for clues to the catastrophe. Julia asks if she thinks the safety of the children is unimportant, and Maggie apologetically agrees. 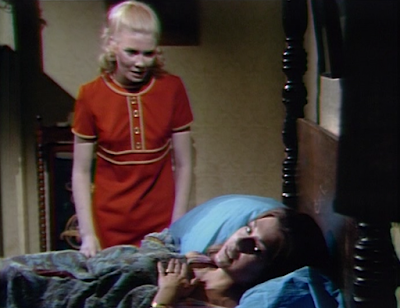 In the playroom, standing before the spinning carousel, David begs for Gerard to appear to him. It stops, and David feels a presence in the room. He calls to Gerard. He turns and sees Carrie. He asks her to speak to him if she can. He says he has a question for Gerard, but she might be able to answer. He asks if Gerard is the one who attacked Maggie. Carrie smiles, and then shakes her head no. David says Julia must have been right, and it must have been an animal. He then asks Carrie what is going to happen to Hallie and him. He asks if she'll tell him and she nods. He goes to get Hallie. Carrie approaches the Carousel and it begins to spin again. 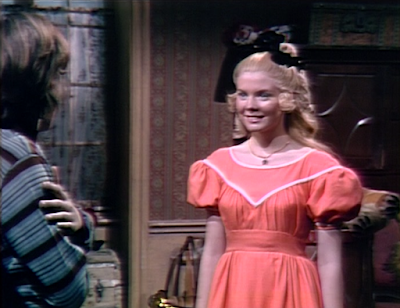 Julia tells Barnabas that all the symptoms are there. He asks if she implied to Maggie that he may have been responsible. She confirms that she did not. She does tell him that she was certain that he was responsible. He tells her to take him to Maggie, which will prove to her that he's not responsible. He adds that they need to find the unknown source before any more harm is done. 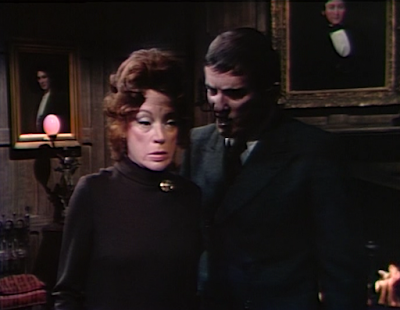 David asks Maggie if Hallie told her where she was going. Maggie says she doesn't remember. Julia and Barnabas come in and ask David what he's doing. He says he was checking on Maggie. He asks if they've seen Hallie, and they say no. He says to tell her he's looking for her if they do, and leaves. Barnabas asks about Maggie, who remains distant, even to him. Julia asks him to step outside. She says she knows now that he isn't the one who attacked her. He laments the agony that he himself has inflicted on so many. They hear dogs howling, and Barnabas says he's out there. He says he'll search the grounds, and asks Julia to guard her. She says she has a crucifix. He says when he finds whoever is responsible, he'll drive the stake himself. 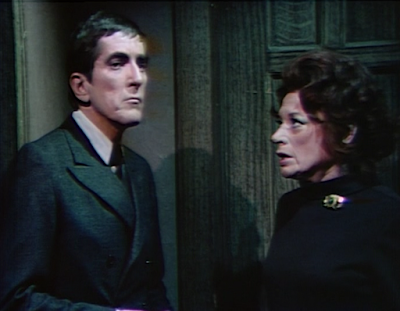 He leaves, and she goes back into Maggie's room. She gets up and puts on her robe. She starts out of her room, hearing the dogs outside. Julia realizes that she's being summoned, and decides that she'll let Maggie lead her to the one responsible. She grabs her crucifix. 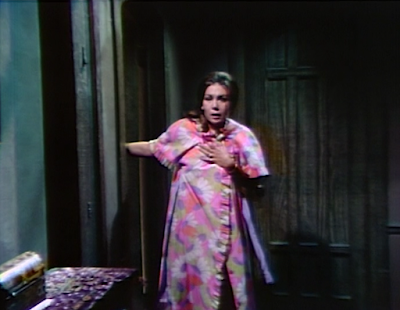 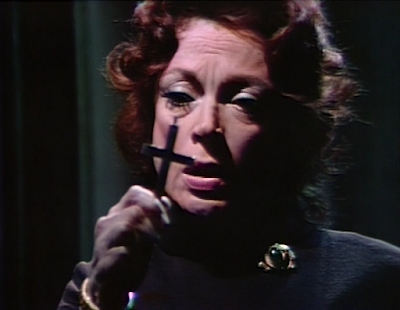 John: Oh come on guys! They were right there, and couldn't make the final connection. I'm going all in saying that the one who attacked Maggie is none other than Roxanne — vampiress! Which starts to make sense of her relationship with Sebastian, and lack of one with Barnabas. And any doubt was removed as soon as Barnabas proclaimed that he would be the one to drive the stake... since we all know he'll be hard pressed to kill off his latest love interest.

Christine: Yup! And Julia seems destined to make the discovery. Will she be conflicted in telling Barnabas that his parallel paramour is the vampire in question, knowing he'll be unable to drive the stake as promised, and fearing he may have found his match made in hell?

John: It's almost funny when Maggie has to play mean. It's so against her nature, it should be obvious to everyone around her that she's under some kind of spell. When she called Vicky a jerk after she first arrived in Collinwood, that was more playful, even if she was completely serious.

Christine: Even the bite of a vampire can't completely erase her good nature.

John: Is it just me, or is Hallie getting a little too whiney? You would think if she was this freaked out, she'd break down and tell Barnabas and Julia everything she knows...

Christine: The kids can't tell anybody because Daphne and Gerard won't let them. All I can think is that maybe it's time for that Jan Brady hairstyle to make a comeback. Join the Hallie hair challenge and give yourself some side curls! I hope we can expect to check off another item from the Catastro-tracker by Friday!