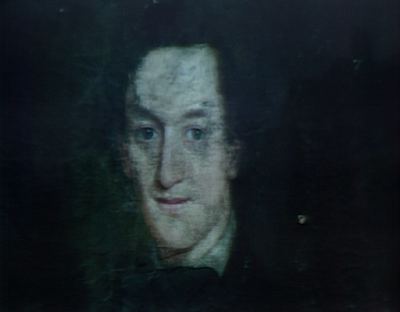 David finds a portrait of Abner Collins. He opens an adjacent door, and finds that it's a closet. He and Hallie step inside, and hear music playing behind the wall. Hallie tells him they should leave. She smells lilacs, and they see the ghost of a woman appear before them. Hallie screams and runs away. David runs after her and the woman fades away. 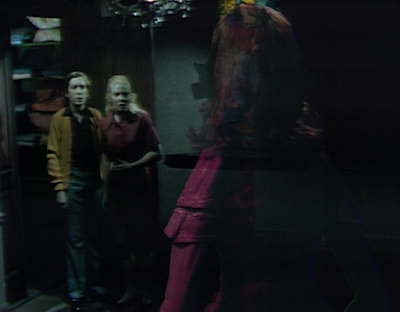 The carousel continues to spin in the playroom... somewhere.

Hallie tells David it was the same woman from her dream, and from the gazebo, and that she's a ghost. David says she has something to do with the playroom, the music, and the smell of lilacs. He says they have to find the playroom. He pulls several papers out of his desk, and hands some to Hallie. 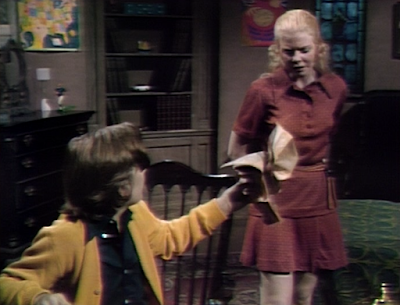 Barnabas and Julia found information on Carrie and Tad's birth and death dates. Julia says they were similar ages of David and Hallie when they died. Julia also reminds him that the Collins family history isn't famous for accuracy. He adds that something unusual must have happened to them. Quentin comes in and says he wishes he could be of help. Quentin goes to the window and looks out at the full moon. Julia asks him if he's okay, or if he's in any danger. He tells her the portrait is secure and so is he. 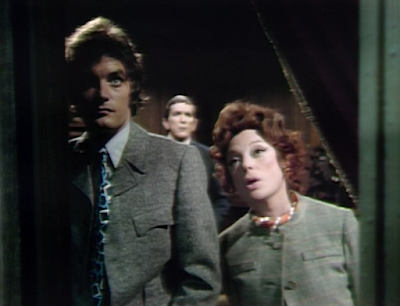 He says he was thinking of Chris, and how he hated to see he, Sabrina and Amy leave together. Quentin points out that there is a lunar eclipse tonight, and invites them to join him in the tower room to watch it. They decline, choosing to continue their research of family history. Quentin leaves, and Barnabas reiterates that tonight the moon goes dark when the Earth is between the Moon and the Sun. He realizes that it's one of the clues Carolyn had told them in the future. He says they need to confirm that David and Hallie are alright. Julia suggests that they should tell them, and he asks if she thinks they should be told that they're going to die and come back as some sort of mysterious ghosts? Julia goes to the window and looks at the beginning of the eclipse before going upstairs. 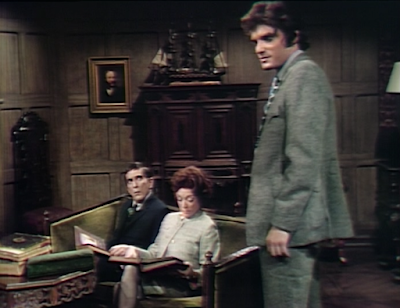 David and Hallie review the handwriting on the old notes. Hallie reads one that references Rose Cottage. David tells her to watch for the ones mentioning the playroom. She reads another about Rose Cottage, and he asks her again to focus on the playroom. He reads one that says don't ride on the carousel too long—it could be dangerous. Hallie asks him if they're playing a game, and if so, with the woman? He tells her that they are. 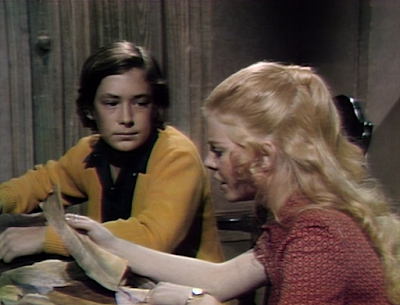 Julia comes upstairs to see them, and they hide the letters. Julia asks them if they want to go sailing tomorrow. They say Maggie won't let them, due to their lessons. She asks if they've noticed anything unusual around the house. Hallie asks if she has anything specific in mind. Julia invites them to watch the eclipse with them, and David says he must stick to his studying. Julia says she'll let them know when the eclipse covers the moon, and Hallie says that will be after they are asleep. Julia leaves them. 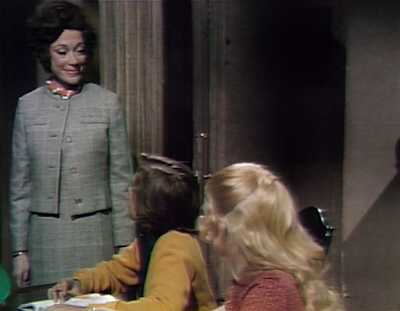 Barnabas tells Quentin about Carolyn's clue. He suggests that the children must leave Collinwood for their own safety. Quentin says he would agree, but Elizabeth will not. Barnabas says they can't wait for the second clue to appear—an unfinished horoscope. Quentin says Elizabeth is convinced that all will be fine in Collinwood—because she just had an astrologer write up her horoscope. Barnabas is shocked that the second clue has been identified. Quentin clarifies that the horoscope is not unfinished. It promises tranquility in Collinwood. He adds that Elizabeth is in Portland for a few days. Barnabas says the entire house is in danger. Quentin says Elizabeth wouldn't agree. Julia comes down and says that she saw the kids, but they seemed to be hiding something from her. She says they must watch over them. Quentin says he'll watch over them, and goes upstairs. She checks the moon, and wonders what the next clue will be. Barnabas says it won't be very long from now. 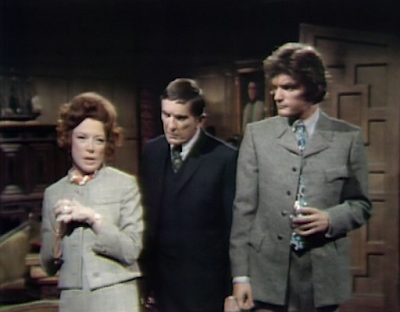 Quentin checks on David in bed. After he leaves, David gets out of bed, fully dressed. He meets Hallie in the hall, and she says Quentin checked on her as well.

Julia tells Barnabas that Elizabeth's horoscope is finished. She wonders if tonight isn't the night of the sun and the moon. Quentin comes down, says the kids are asleep, and checks on the eclipse, which is almost complete. They watch as it does. 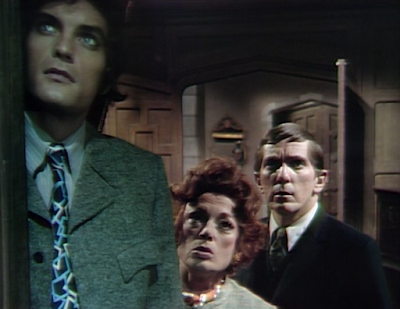 David and Hallie stand outside the door where they hear music playing. She reads a note which says when the music ends, the play begins. The music stops, and David wonders what will happen. Hallie starts to leave, and the door opens on its own, revealing the playroom inside, where there was once a closet. 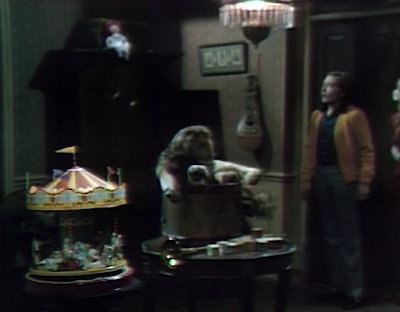 John: So there's our answer as far as Amy is concerned. Swept away with Chris and Sabrina, I assume never to be seen again. Sad that we were deprived any resolution to the Werewolf of Collinwood storyline...

Christine: Perhaps they've joined Adam at the Island of Misfit Monsters. The Werewolf storyline was not my favorite, but it's still dissatisfying to have it go unresolved. It might have been interesting to see Quentin play the doting grandpa to Amy, while trying to help Chris cure his inherited lycanthropy.

John: So Carolyn's future clues are starting to materialize. Kinda sorta. But it sounds like they're not so much clues to what's happening as they are just timing markers, and that's not going to do anyone any good if they don't know what they need to do to prevent Collinwood from falling to decay in 25 years.

Christine: I have a feeling it's going to be a long night over the next week or more. Time to start another tracker! I wonder why Elizabeth decided to go to Portland. I don't remember her horoscope telling her to do that.

John: So I guess this parallel/time-travel portal is tied to the music in the carousel... like a game of haunted musical chairs? I'm looking forward to understanding how Gerard, Daphne, Tim and Carrie all fit in.

Christine: I think the carousel may be akin to the antique phone as a vehicle for ghostly possession. David really should have learned from the first time he got involved with ghosts, when he almost died, but here we go again. 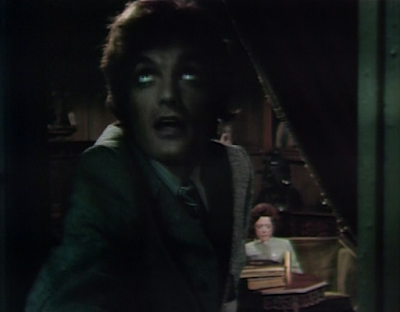 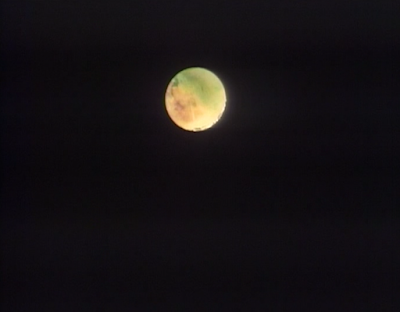 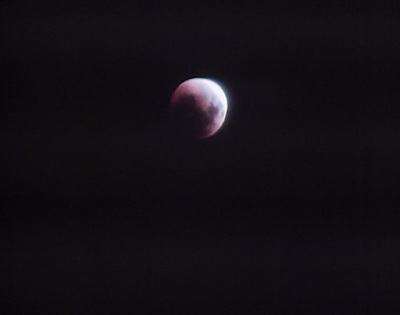 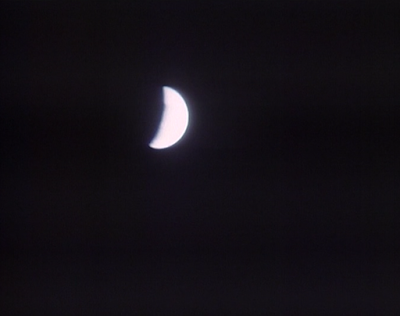 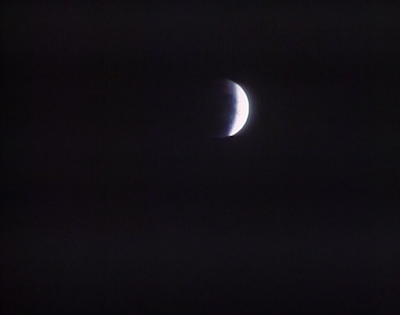 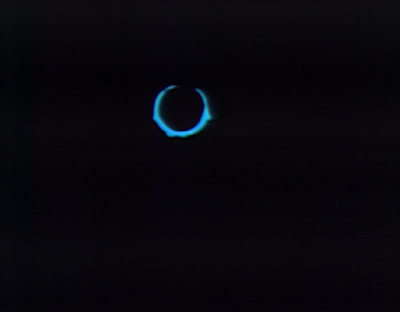 Are the eclipse pics from the episode? Because the bottom one is a solar eclipse! :)

All eclipse photos are taken from the episode, so I am not responsible for any incorrect eclipse representations. ; )