Barnabas and Julia knock on a cottage door. When no one answers, they let themselves in. Barnabas says that Roxanne lived here in parallel time. Julia points out that all the furnishings are from Collinwood. She finds his portrait lying against a wall, and says whoever lives there knows Collinwood. He asks how they know it, wondering if these are the spoils of disaster. Julia points out that someone is about to enter. 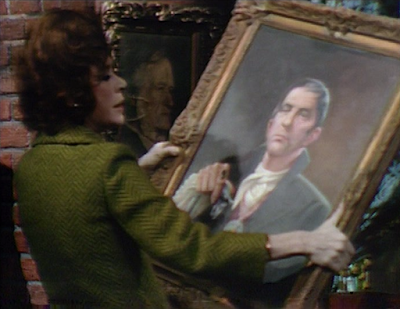 Withered old Carolyn comes in. She asks if they got away and came back. She says they shouldn't look the same. She asks why they're there. They say Mrs. Johnson sent them. Barnabas asks about the others, and Carolyn says they'll be back soon. Barnabas says they saw David's grave, and Carolyn laughs. She says she loves her secrets. Julia asks her to share her secrets with them. Barnabas asks her why she calls herself Fredericks, and she says Collins is not a good name. They don't like it. He asks if she married, and she says she married Jeb Hawkes. She tells them to get out of her house. She says they weren't there, and tells them to go back to where they came from. They leave, and she tells them never to come back. Once they're gone, Carolyn leaves her house. 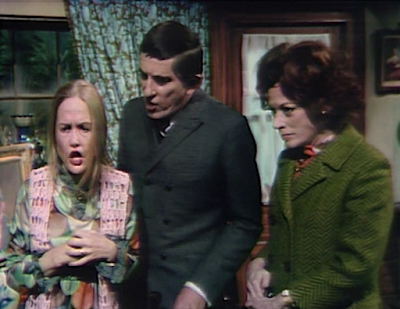 Barnabas and Julia go to the mausoleum and enter the secret room. They discuss Carolyn. Julia says he shouldn't stay there tonight, and he says they have no choice. He tells her that she must sleep, too. He tries to send her into the village, and she tells him that she'll stay and guard him. They hear a rooster crow, and he asks her to go, and be careful. She says she will. He opens the coffin and climbs in. Julia stands over his coffin, and then leaves him. 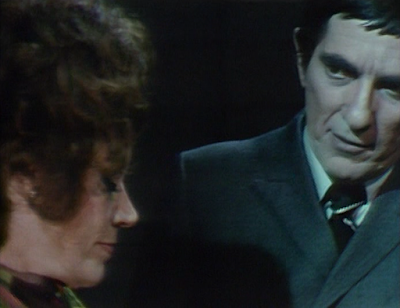 As she leaves the mausoleum, Carolyn appears and asks her what she's doing there. She tells Julia not to mention the family name. Julia asks why she's there. Carolyn says she's looking for her mother's grave, and then says that her mother isn't dead. She says the cemetery is peaceful. And Collinwood is peaceful now. Carolyn asks Julia where her friend Barnabas is. She says he's in the village trying to find out what she won't tell them. Carolyn says she acts the way she is. She asks if her mother were dead, wouldn't they have buried her here? She tells Julia that she had better find her friend before he gets into trouble. 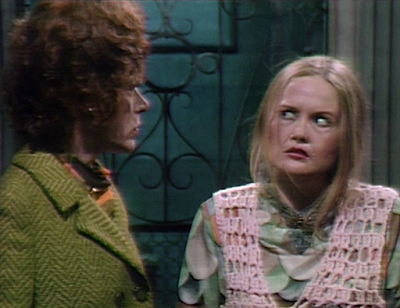 Stokes comes out of the shadows, and Carolyn says she told him, and that they must make them go. 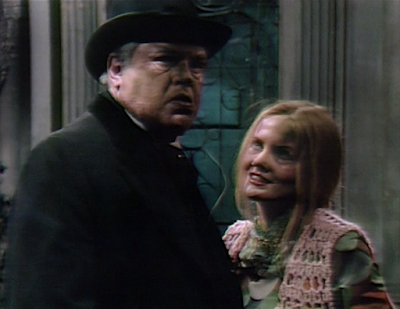 Julia speaks to a man about old records on Collinwood. She says she's writing an article on the Collins family in 1970. The man says she's got him. He says the records are missing. That those records were lost in a recent fire. She asks him what he knows about the Collins family. He's unsettled, and avoids the conversation. She asks why the house is deserted, and he suggests that she forget about it. He says Victor and Jean found that out. He tells her not to bother Victor, and adds that he's closing for lunch now. 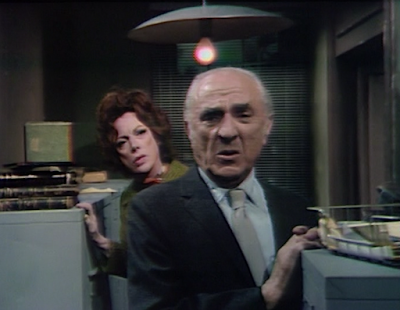 She leaves, and runs into Elliot Stokes. He turns to look at her, and asks how she managed to maintain her appearance. She reminds him that he told her about parallel time. He tells her that she and Barnabas must go away, or they will be forced to act. 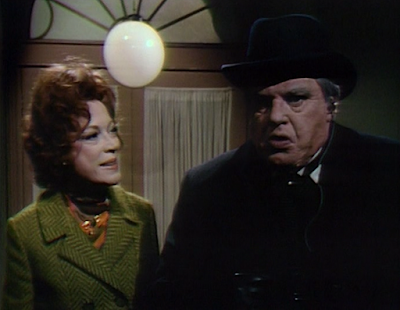 Barnabas tells Julia that he will go to Stokes himself. She says he's not the same man. Barnabas says if they found one thing that happened, they could get him to talk. She says that he didn't see the man's at the records office when she mentioned the Collins family. Julia says that she was concerned when she left Carolyn outside the mausoleum this morning, she was terrified that she knew he was in the mausoleum. Barnabas asks her if they're just supposed to return to Angelique's room in Collinwood, hope they'll be whisked back to 1970 so they can watch the events unfold that lead to this future? They leave the secret room and exit the mausoleum.  Stokes and the clerk watch from the shadows. 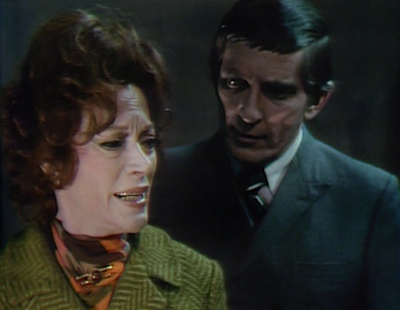 The clerk asks Stokes if they're going to Victor's. He says perhaps Victor can stop them from ever going to Collinwood again. 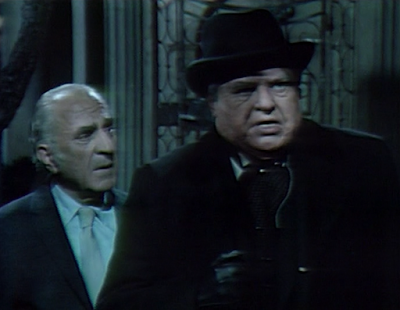 Victor says he has nothing to say about the house. He says he has no use for any Collins, and tells them to leave. Barnabas tells him that they won't leave until he tells them what they want to know. Julia asks him who Jean is. She picks up a woman's photo, and asks if that's Jean, and if they can talk to her. He asks if she wants him to take her where she's buried. He sits down and says that he and Jean went to Collinwood on a dare. People said they saw things and heard music in the empty house. Barnabas asks who's there. Victor says he felt something that made his skin crawl, and Jean felt it, too. He says that while they were in the house, something fell from the balcony and hit Jean. He says he heard laughter upstairs, and Jean was dead. 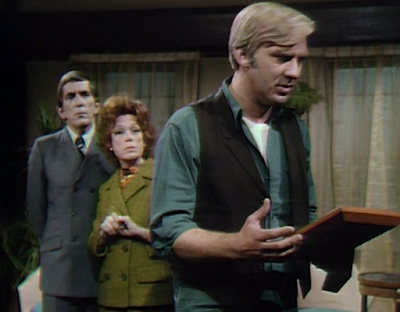 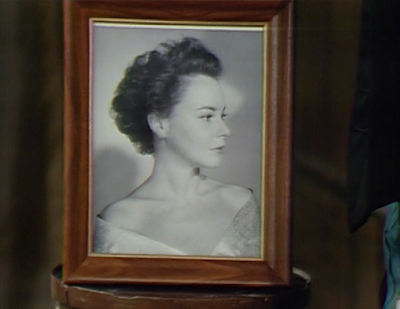 As they return to the cemetery, Julia asks Barnabas if Victor knew anything he didn't tell them, and he says no. Barnabas says there's some plot to keep them and everyone else from knowing what happened at Collinwood. They enter the mausoleum and see the secret door standing open. Julia whispers that someone knows. 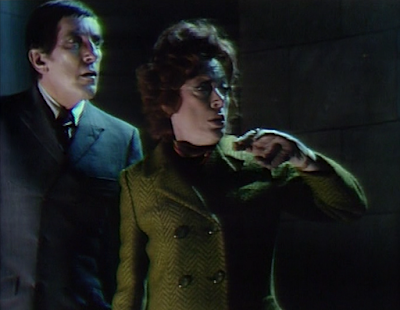 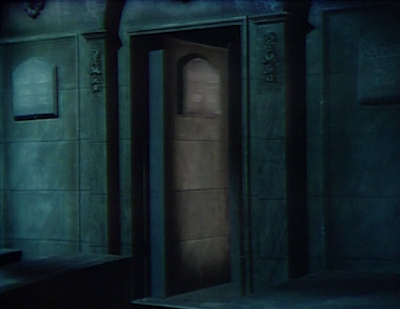 John: Several fresh faces in Collinwood in 1995! A bumbling clerk and Victor Flagler! Of course Victor turned out to be the cliché character who took his girlfriend into a haunted house, only for her to get killed mysteriously. Wouldn't it have been quicker (and cheaper) to just have the records clerk share that story?

Christine: We also had some not so fresh faces. Carolyn is looking pretty rough for only having just turned 49! It seems we only went to Victor Flagler's house so we could see dear Jean's photo prominently displayed. Jean must be related to Julia, because she sure looks a lot like a younger version of her. 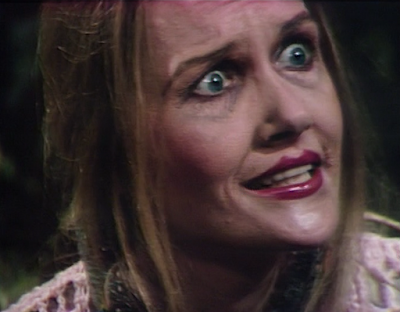 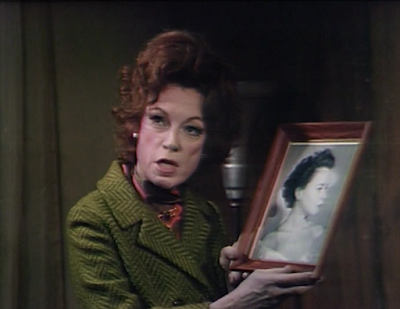 John: Odd that they setup the records clerk as having a relationship with Stokes, considering they didn't even bother to give him a name! I wonder if we've seen the last of him. 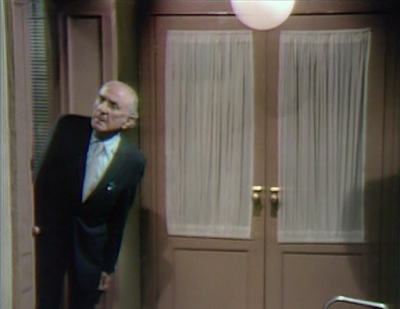 Christine: I confess, I peeked on IMDb to find out, but I'm not telling. I can tell you that Cliff Cudney, who played Victor Flagler, also appeared on the show as zombie John Hart.


John: Would Stokes really think that Victor's ghost story might scare Barnabas and Julia off? You'd think he doesn't know who they really are. And he didn't even acknowledge Julia's reminding him that he told her all about parallel time. I kind of wish he called the idea of parallel time preposterous!

Christine: I also expected a more horrifying story from Victor. It leads me to believe that whatever is so terrifying that makes Carolyn and Stokes want to drive Barnabas and Julia away is probably not anything worse than they've seen before. They've seen Leviathans, after all. Can there be anything more terrifying than that? Incidentally, I would like to note that those of us viewing episodes from the Coffin boxset have just reached Barnabas' cravat. We only have a Barnabas head of discs left after this one! 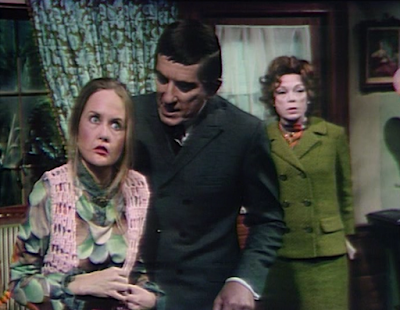