Barnabas and Julia are surrounded by flames. They hear Roxanne and Barnabas tries to reach her across the flames, but is unable to. They suddenly find themselves back in their original time band—without Roxanne. Barnabas says he's got to go back, and she says that Angelique's room no longer exists in parallel time; it's been burned—destroyed. She says if there was anything she could do, she would. 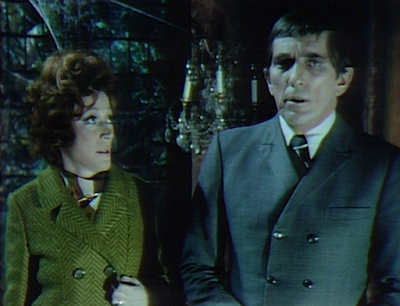 Barnabas says he has got to see her again; she's the only woman who has made him forget Josette. He thought he might be cured, and be happy. He bemoans fate for tempting him with happiness. Julia tells him that he's not the only one whose had so little hope at finding love... She gazes into his eyes, and he walks by her. He says as long as he exists, he will despise the room for what it has done to him. Julia notices the room is different. Barnabas agrees, and says it smells of decay. Julia says that something has happened. Barnabas calls to her, and the look out the door to see the house in ruins. 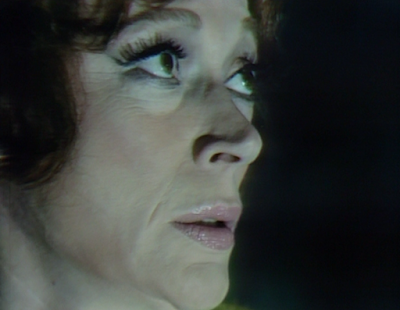 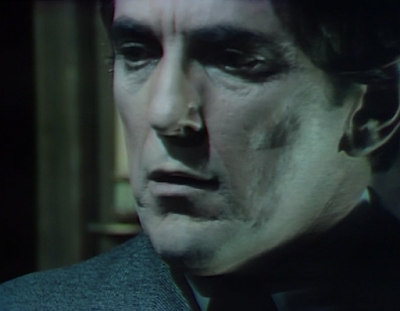 Barnabas and Julia arrive at the top of the foyer. She asks what happened, and where everyone is. They comes downstairs, and Julia tentatively calls for Elizabeth or Carolyn. Barnabas tells her no one is there. Julia finds a half empty glass. Barnabas enters the drawing room. He says it's as if the house was simply abandoned. He asks her if everyone they knew—all their friends—are dead. She admits that she doesn't know. She finds some brittle papers which she says she left on the desk the day she went into parallel time. 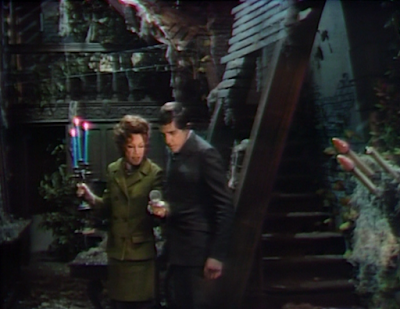 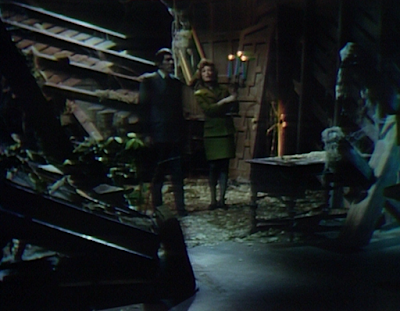 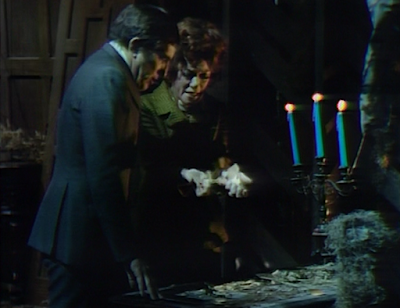 She finds a note from Elizabeth saying they must leave Collinwood. Barnabas questions what the reason would be. He then finds Elizabeth's diary. It is burned, and the final pages were from 1970. 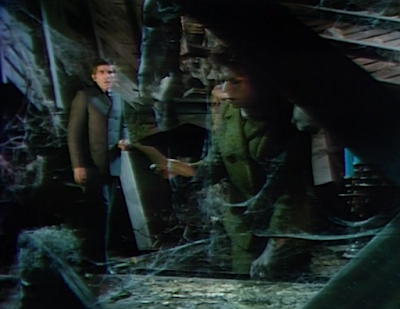 They hear the front door and go to see who it is. The door slams shut, and Barnabas says it's just the wind. He looks outside, and says that trees have grown right up to the front door. He suggests that they may have returned to their own time band, but in the future. She tells him that she's frightened, like a lost child who will never find her way home. Barnabas says they may find a clue at the old house or cemetery. He reminds her that he has to find his coffin before dawn. They leave Collinwood. 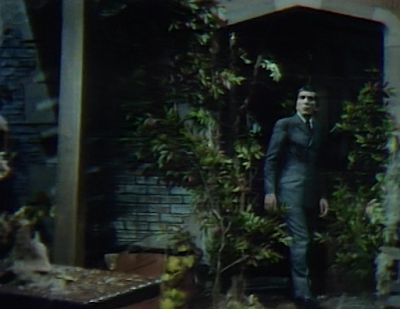 In the cemetery, Julia mentions that Barnabas' coffin wasn't in the old house. She notices a fresh grave. Barnabas asks her to read the inscription. It says Henry Beecham 1967-1995. Barnabas says the grave was just dug, meaning it's 1995. He sees an old grave inscribed: David Collins Born 1956 Died 1970. 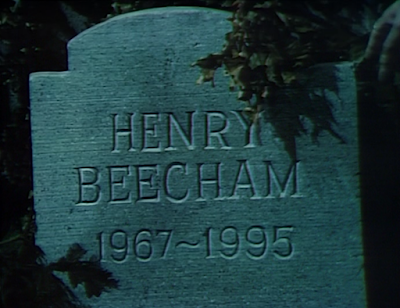 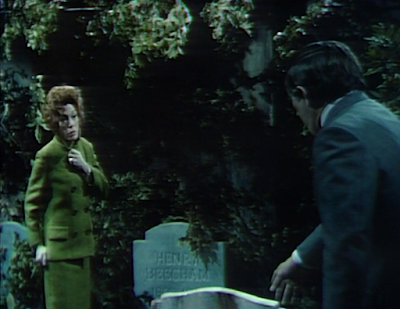 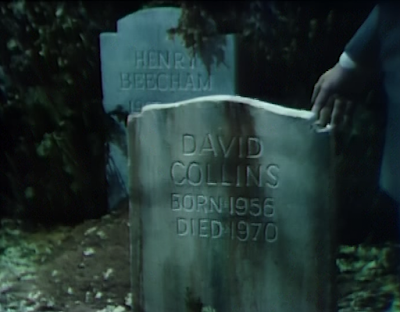 Julia can't believe it. Barnabas finds fresh flowers on the grave. He picks them up, and old Mrs. Johnson tells him to put the flowers down. Julia asks if she recognizes them. Mrs. Johnson says she doesn't believe in ghosts. She says they disappeared 25 years ago, and look the same, which means they're ghosts back to disturb David's rest. She says he deserves peace. She says she couldn't save him then, and Barnabas asks what she means. Julia asks her what happened at Collinwood, and Barnabas asks if it had to do with David's death. She says nothing happened, and asks them not to hurt her. Barnabas assures her they won't harm her, but demands her to tell them what happened at Collinwood and to David. 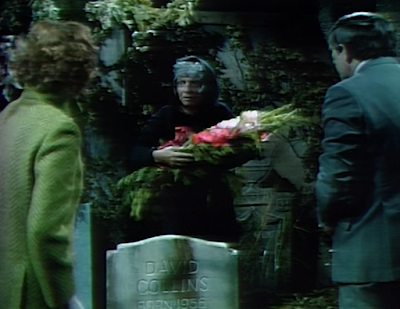 She says they're all gone. Julia asks where, and why. Mrs. Johnson says it was too horrible. She says no one is supposed to have anything to do with anyone named Collins. Barnabas asks her again what happened. He asks if anyone in the family is still alive. 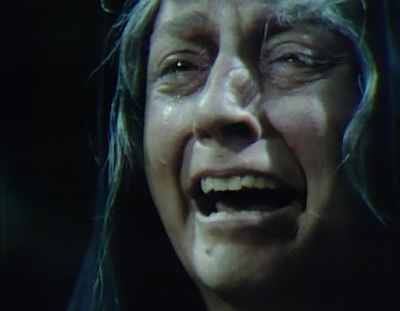 She tells him that the Collins family are all alive and well. She says Elizabeth is in Rome with Roger. She says Quentin went to South America and is happily married. Barnabas asks if she's telling him the truth. She says she is, but he doubts her. She says she may have exaggerated a bit. She says she's trying to forget, and she doesn't know whether they're real or not. She tells them that she has suffered enough. Barnabas asks her if there's anyone who can tell them something. She says Frederick's—the old shack and Findley's Cove, and runs off. 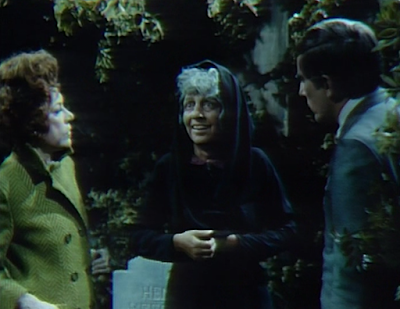 Barnabas and Julia knock on a cottage door. When no one answers, they let themselves in. Barnabas says that Roxanne lived here in parallel time. Julia points out that all the furnishings are from Collinwood. She finds his portrait lying against a wall, and says whoever lives there knows Collinwood. He asks how they know it, wondering if these are the spoils of disaster. Julia points out that someone is about to enter... 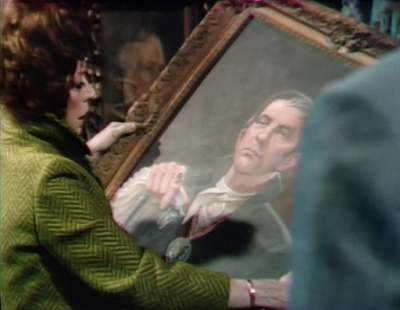 John: Damn, Barnabas. Are you purposefully torturing Julia? Or are you really so clueless that you don't recognize the woman has been pining for you across time bands? Why not just tell her you don't like her that way and be done with it?

Christine: Barnabas is very well aware that Julia is in love with him. Back in Episode 359, he played on her affections to try and get her to give up her notes on her anti-vampire treatments, and Carolyn chastised him for it, knowing Julia was in love with him. I don't think he's deliberately torturing her. He's just thinking only of himself, as usual. He has feelings for Julia, but just can't give up his obsession for young girls. It's why he immediately became enamored with a younger version of Julia in Roxanne.


John: Call me crazy, but as Barnabas and Julia prepare to leave Collinwood, it sounded like the first new music we've heard in years!

Christine: You're crazy! Don't make me go search hundreds of Robert Cobert's music cues to see if you're right! I suppose it's not out of the realm of possibility, since they also began with a new shot of Collinwood at the beginning of the episode. Perhaps not entirely new, but certainly not one we've seen in a very long time. 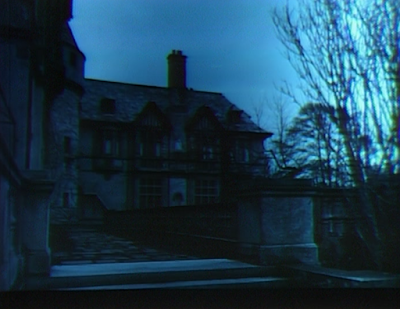 John: I have to say, landing in 1995, with Collinwood in ruins, is a nice treat after the convoluted mess of parallel time. I can't wait to figure out what led things down this path.

Christine: The highlight was seeing Mrs. Johnson again! Of course, we must talk about Collinwood Portraits and assume that the change in locations of portraits is an indication that events were altered in the original time band. Abigail's portrait is now hanging where Naomi's portrait was usually found. 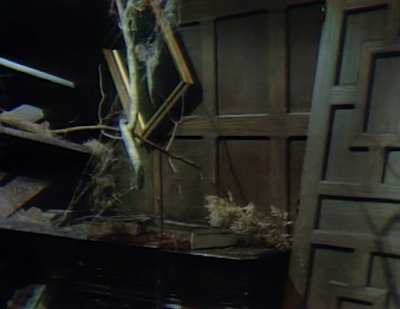 It is too cobwebby and out of focus to tell whether or not Jeremiah's portrait is still hanging over the mantel as usual. The frame appears to match, but the clothing looks different. 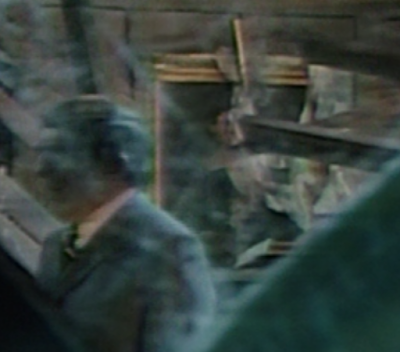 Of course, it's good to see that the portrait of town founder, Isaac Collins, has been rescued and put on display at the old shack at Findley's Cove. 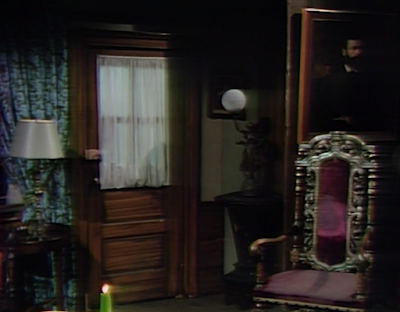 Joshua's portrait also hangs there. It will be interesting to see what other portraits were preserved, in addition to Barnabas' ancestral portrait, as well as who's responsible for pulling them from Collinwood. 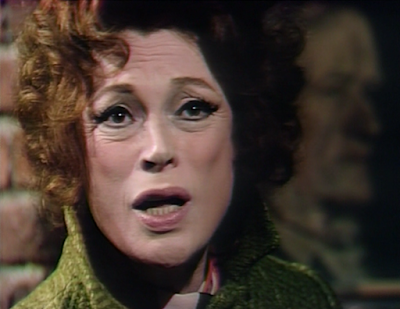 I saw this, first-run on my tenth birthday! 1995 seemed so very far away in the future back then!