Maggie suggests that Roger knows something, and he denies it. She says they should get help, and tries to go out the door. She asks him for the key. He holds it out to her, but takes it back, saying she should be afraid Quentin is out there. She says she's sure he's gone away. He asks what she is going to tell the police? That he killed Elizabeth, and Carolyn, and Angelique? He tells her that she was right, but they'll never know, and clutches her throat. She passes out. 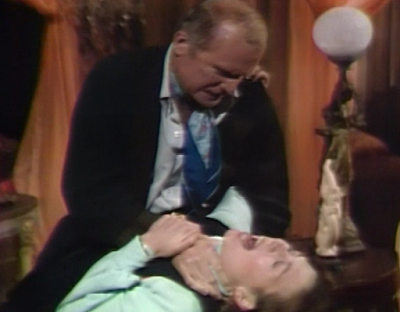 Angelexis pounds on the door demanding that he open the door. He sets Maggie down by the fireplace, and then opens the door and blocking it, tells Angelexis that he thought he heard a noise. He says he came in to investigate, but there was no one there. 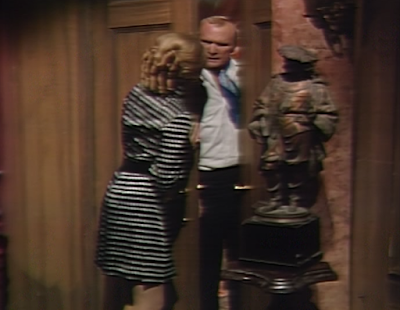 She hears someone coughing, and pushes past him. She finds Maggie and helps her up. She says Roger tried to kill her. 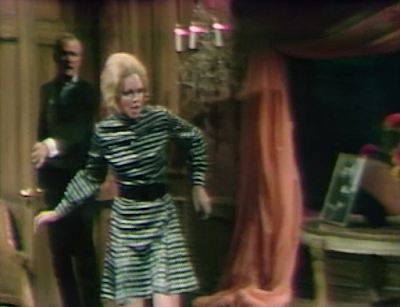 She says he killed Angelique. She asks how he knows. Maggie says he admitted to killing her, Elizabeth, and Carolyn. Angelexis is surprised she didn't figure it out before. She says he loved her, but she hated him. Maggie says they should call the police, and Angelexis reluctantly agrees. She says he deserves a special punishment. 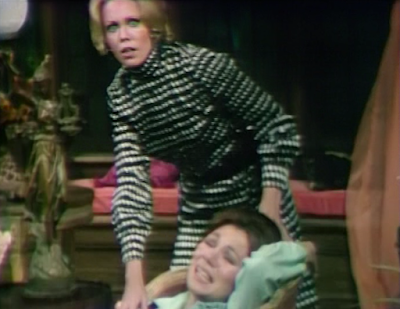 Barnabas stands over Roxanne's unconscious body. He wonders where Julia is, since she could revive her. He knows if Roxanne rises, Angelique will lose her strength, but if she speaks, Angelique wil be destroyed. He needs to Angelique to prove the truth to Quentin, and to find Julia... but he decides to throw the switch anyway. Despite not being connected to anything, Roxanne begins to glow. 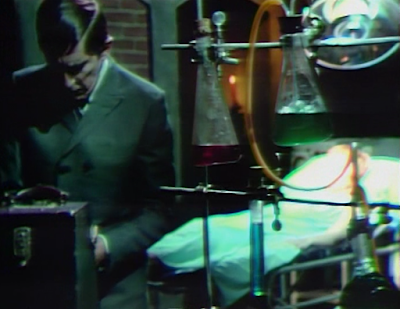 Roger sneaks downstairs and goes outside.

Angelique sits in front of the fire and summons Roger. She says he will find his way through the police and come to her. 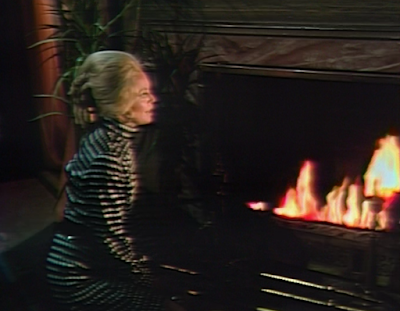 Roxanne continues to glow as Barnabas stares at her. He throws the switch off, and decides that he has failed. He realizes that he has to find Julia—if she's still alive.

Claude North snoops around the Loomis house. After Barnabas leaves, he sneaks inside. 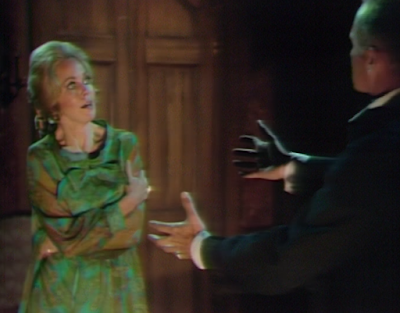 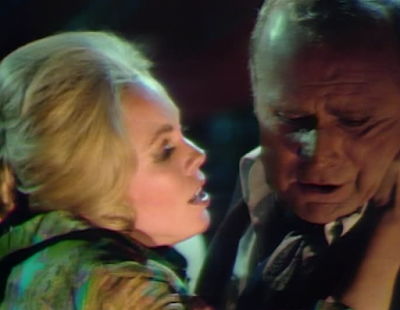 She tells him to keep holding her. He falls to the ground, dead. 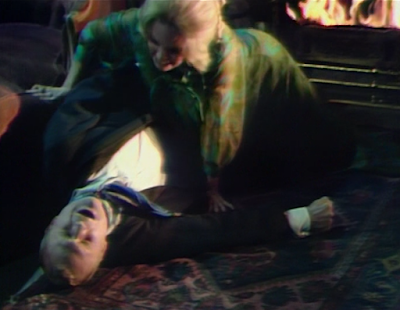 Claude finds Roxanne in the basement, and tells her that he's come for her. She's unresponsive. He pulls out his dagger and calls her to look into his eyes. He eyes flutter open. She looks him in the eyes. 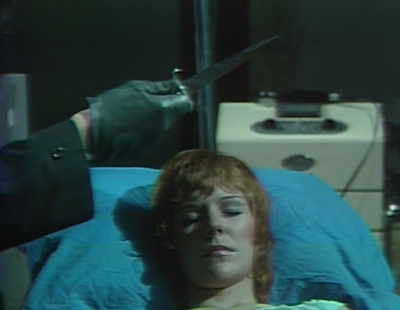 Barnabas asks Angelique if Julia is dead. She says perhaps she is, and perhaps not. Angelique starts to faint, and says something is happening to Roxanne. She says she must not speak, and he agrees—at least not yet. He leaves her. 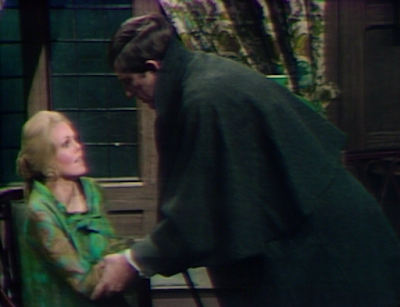 Claude tells Roxanne she will do his bidding. Barnabas interrupts him. He introduces himself, and North asks how he knows him. Barnabas says his name was on the portrait of Roxanne, as well as the grave. North explains that is his grandfather. Barnabas threatens North if he makes her speak, and North threatens to make her speak. Barnabas says Quentin's life depends on her silence. North says Quentin's life means nothing to him. He says he wants his Roxanne again, and Angelique's destruction is mere minutes away. Barnabas leaves them. 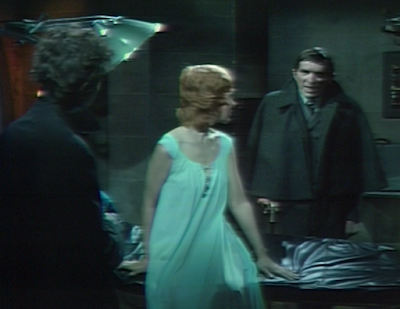 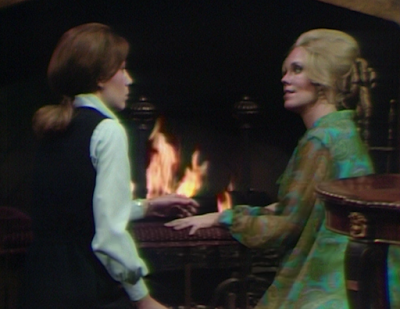 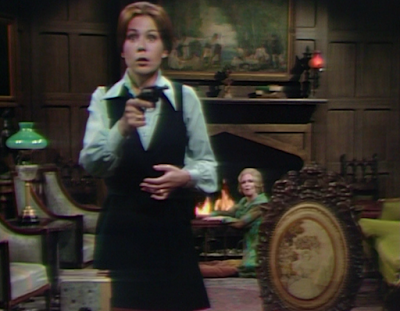 Claude tells Roxanne to speak to him.

Barnabas tells Angelique that North is going to make Roxanne speak. He says that before she goes, she'll sign a confession, and she'll tell him where Julia is. Angelique refuses. 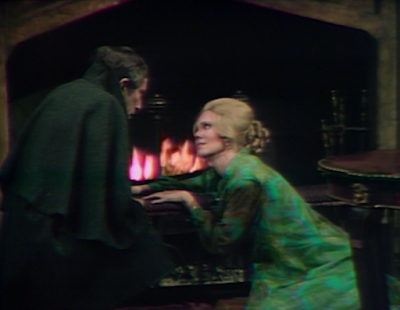 Maggie stands waiting with the gun in Angelique's room.

Barnabas begs Angelique to sign the confession. She says she came to destroy Quentin, not save him. Barnabas says she only has minutes... or seconds... She says the same is true for Quentin.

Someone tries the door to Angelique's room, while Maggie waits inside with the gun drawn. 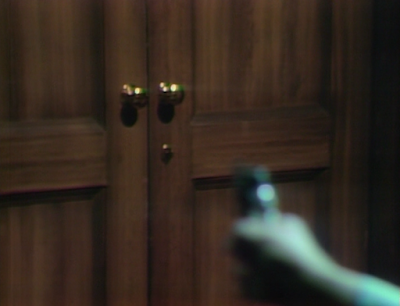 John: Unless they come back to our original time band... I'm getting more and more of a sense that the whole Claude/Roxanne sidebar is going to fade away without any real explanation.

Christine: You're an optimist, aren't you? I don't think Barnabas' obsession will wither away that easily.

John: What a fitting death for this Roger Collins! And in true form, he did not go quietly. Nice job Louis!

Christine: Yes, though I don't know how much he suffered from finally getting to lock lips with Angelique.

John: Why does Barnabas think that at her moment of death, Angelique will suddenly feel charitable and do anything to save Quentin or Julia? And doesn't it seem silly to think that a signed confession from her will impress Quentin?

Christine: It didn't seem very tactful for him to tell her she was dying. He may have had a better result if he said he could save her if she did what he asked. I don't understand why Angelique still wants Quentin to die when she knows now he was not the one who killed her. I really don't get why Barnabas would think it's more important to get her to sign a confession than find out where Julia is. Barnabas really sucks sometimes. 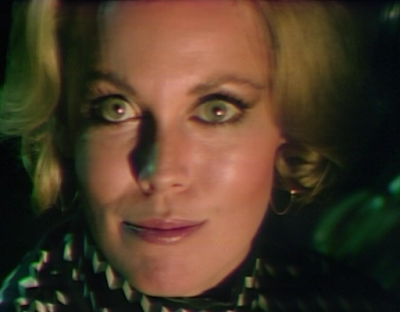