Julia and Barnabas follow Carolyn as she makes her way into a room upstairs in the ruins of Collinwood. Barnabas says he doesn't ever remember seeing the room. They hear music, and Carolyn laughing. Barnabas opens the door. They go into a playroom and Carolyn tells them to get out. Julia asks him if he saw them, and he says that he did, but he wasn't sure what it was. She says it was like two people, but they disappeared. He points out that this room isn't in ruins like the rest of the house. Carolyn tells them to go away. 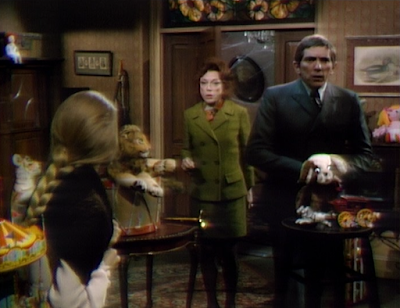 Julia asks her what they saw, and she says they saw nothing. Barnabas asks if it was the same spirit they saw downstairs. Julia asks her whose voices they heard. Carolyn says she was talking to herself. Carolyn says she was asking how long until everyone comes back. She asks if they know when everyone will be back. Julia says that they also want to know where everyone is. Carolyn asks how they found the room, and Julia says they followed her. She tells them they must leave, and Barnabas says he won't leave without her. Carolyn threatens to call the sheriff. Barnabas asks her to come find them at the old house house if she changes her mind. 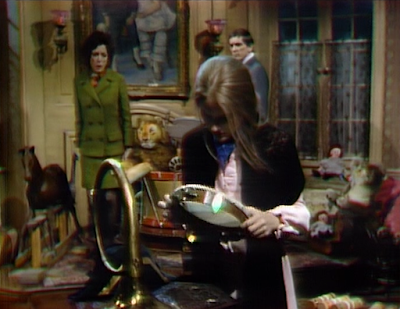 After they're gone, she says he wouldn't like it if she changed her mind, and speaks to someone named Tad, who appears to have disappeared, upsetting Carolyn further. 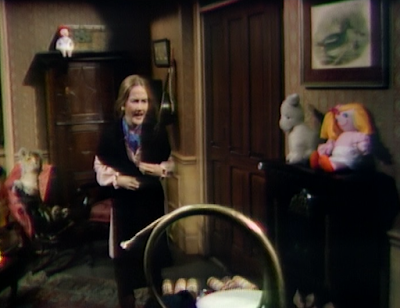 Old man Stokes reads a letter stating that Quentin Collins condition has worsened. Barnabas and Julia visit old man Stokes, and he says he has nothing to tell them. Stokes asks them why they didn't leave. Barnabas says they were at Collinwood earlier, and Stokes says their lives are in danger. Barnabas says they saw the face of a man in the window—after something almost killed Julia. They ask who the man is. Stokes says many people claim to see things at Collinwood; it doesn't mean they exist. Julia reads the letter about Quentin. Stokes grabs it from her. 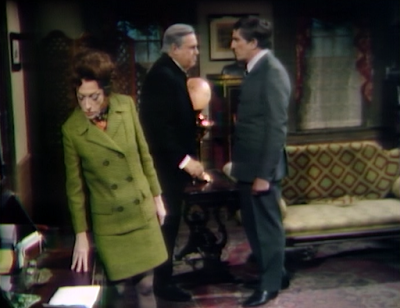 Barnabas asks where Quentin is, and Stokes hands him the letter. Barnabas is shocked to hear Quentin is in a mental institution, and Stokes points out that like them, he hasn't aged in 25 years. Barnabas says they must go and see him. Stokes says he just got word that Quentin escaped yesterday. Barnabas asks why everyone is too frightened to speak. He begs Stokes to tell them what he knows. 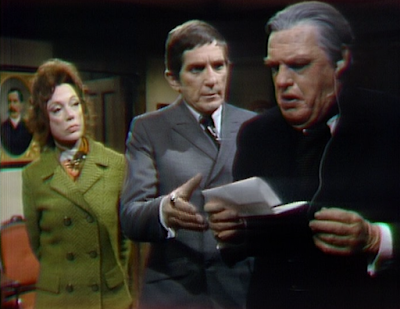 Stokes says he knows very little. Julia doesn't understand. Stokes says that he was traveling when it all happened. He returned to find Collinwood in ruins. After he returned he heard rumors of strange happening. He attempted an exorcism and almost paid for it with his life. He says he saw the ghost, and was surrounded by an overwhelming sense of evil. He says he turned and ran, and never went back. He says the rest of the family vanished; possibly buried somewhere in the house. He says Quentin was found wandering in the woods; incoherent, and Carolyn was cowering in the tower room. Both gone mad. He believes that Carolyn is the only one that knows what really happened, and the secret is buried in the darkest corner of her mind. Barnabas tells Stokes that he's going to help them, and he says he's willing to try. They leave him, and Carolyn enters. She accuses him of telling them about the room. He assures her that he didn't. He asks her to sit down so he can talk to her. 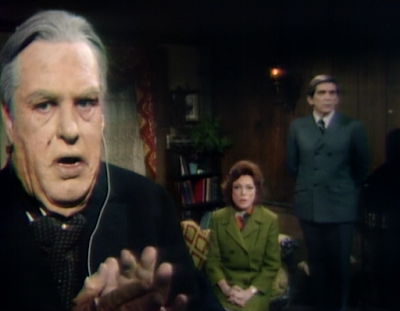 Back at Collinwood, Julia and Barnabas return to the playroom. He wonders why it isn't also in ruins. Julia finds a birthday card to 'Tad' from 'Carrie.' He wonders who those people are. 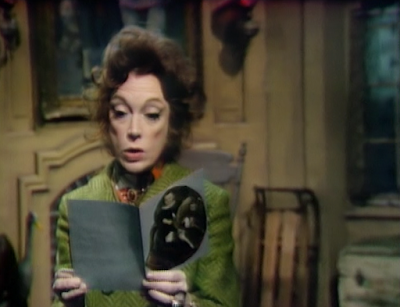 Back at the old house, Julia asks if he thinks Stokes was telling the truth, and he says he was. He says he'd like to speak to Quentin. Barnabas says Quentin's portrait must be intact, since he hasn't grown old. They hear something upstairs, and go to investigate.

Carolyn tells Stokes there won't be another birthday party for another year, and asks if she'll have to wait that long to see Tad again. Stokes asks her to remember what happened back in 1970. He says they've been friends for a long time, and she says he has new friends now. He explains that Julia and Barnabas are trying to help. She says they spoiled the party. 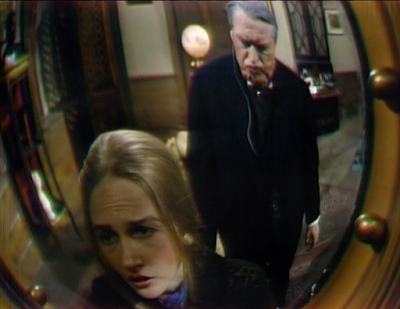 Barnabas and Julia go into an upstairs room at the old house, where they find the withered and decayed portrait of Quentin. Quentin comes in with a knife, saying, "Let me kill him." and is stopped by Barnabas before he can destroy the portrait. 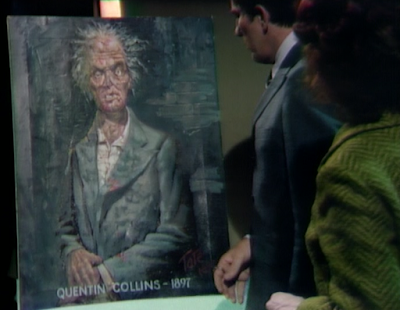 Quentin says he deserves to die. Quentin asks who they are, and Barnabas asks if he recognizes them. Quentin says that they can't be; says it's one of the attendant's tricks. They take Quentin downstairs. 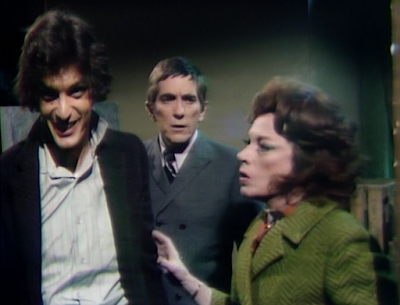 Stokes says Carolyn has said everyone will come back to Collinwood, and asks if she knows where everyone went. He asks if their coming back depends on her. He suggests that if she could remember that night in 1970, Collinwood could change to what it was. He asks her to try and remember. She tells him there are times when she thinks she remembers, but she can never put all the fragments together. He offers to take her home. 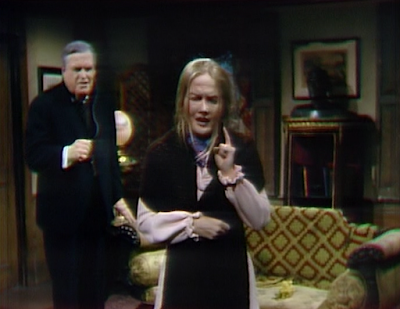 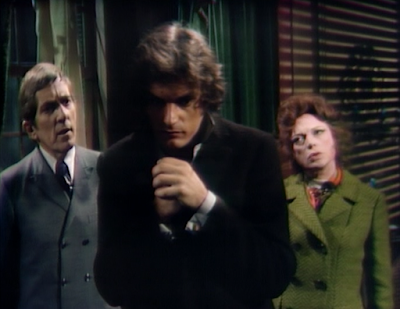 The three return to Collinwood, and listen outside the playroom door, where they hear music playing. Quentin doesn't want to go in, and Barnabas tells him that they must. They open the door, and Quentin says no before running out. Barnabas and Julia step inside and see David. 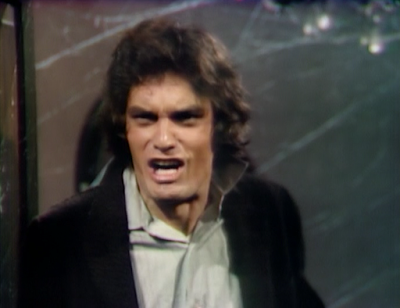 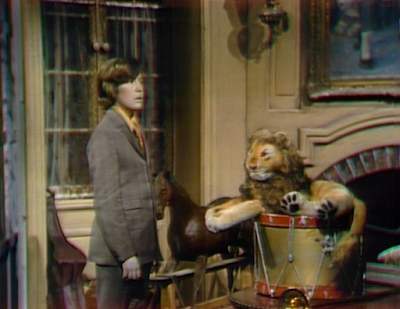 John: Wait - Stokes returned to Collinwood in 1970 to find it in ruins and rubble like it looks today? That would seem even more shocking than it happening over 25 years. And yet he never figured out what happened? A man of mystics and science, not the least bit curious?

John: I have to admit, I had forgotten that Quentin's lack of aging would be tied to his portrait, looking particularly ghoulish today. But what I couldn't immediately recall is whether the portrait is any different in 1995 than it was when we last saw it? One would think it should be significantly different...


Christine: It looks the same as it did in Episode 932. I suppose it should look even more decrepit, but why mess with such a perfectly gruesome portrait? Quite a few portraits were on display today, with the Mustache Man appearing in his usual spot at Eliot Stokes' place and a new portrait hanging outside the play room. Incidentally, I wonder if Stokes keeps that large platter of grapes on hand for whenever Carolyn drops in. She either really loves grapes or hasn't eaten in a while. 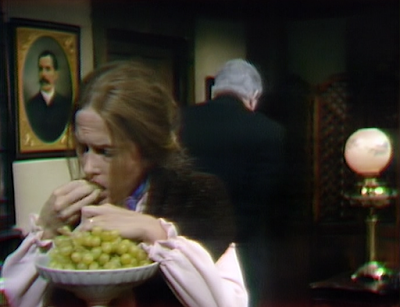 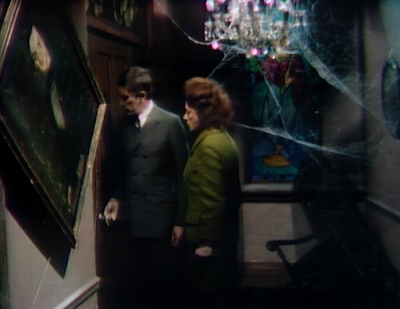 John: David! Or David's ghost, as the case may be. Possibly turning the tables after months of Quentin's ghost hanging around the living David. I hope that when we go back to 1970, someone will explain where we left things off when we were last there, because I'm so confused I'm having a heck of a time remembering! Will we be ignoring werewolf curses, and the like? I guess we'll find out soon enough... we can't hang around in 1995 forever... or can we?

Christine: I'm not sure we'll ever find our way back to 1970 the way things are going. The handy thing about this blog is you can easily refresh your memory of where we left off before our parallel adventure with just one click. Head on over to Episode 980 to revisit our last day in 1970 when Barnabas killed Sky because he had killed Jeb after trying to kill Carolyn. It's no wonder Collinwood fell apart after all that. It's possible Dan Curtis was hoping to stay away long enough that viewers would forget all about the Leviathans.
Posted by John Scoleri at 6:00 AM