Jeb stands over a number of fresh graves, and asks the occupants to join him. He calls upon them, offering an exchange of five souls for four dead servants. Hands break through the soft earth. One by one, the zombies rise—Thomas, John, Amos, and Emory.

Jeb commands them to look at him. He explains that he is their leader. He tells them that four men and one woman will join them, four men and one woman. Barnabas, Quentin and Roger Collins, Willie Loomis and Julia Hoffman. He says their graves are to be dug tonight, and they will be in them by tomorrow. 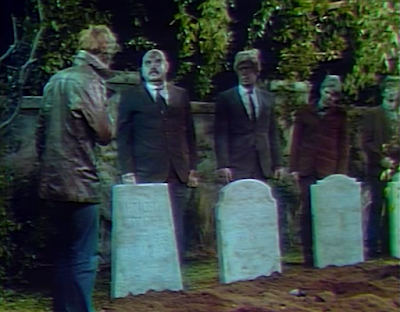 Julia asks Barnabas what's wrong. He says he has a premonition that Jeb is planning something. Julia says if only they hadn't discovered Maggie was working for them. Barnabas says Megan is now working for them. Julia says Megan is fanatic about Jeb. She prepares Barnabas' injections. They don't notice that Jeb and a zombie are outside the window looking in. Julia gives him the injection. Jeb realizes that Julia is helping Barnabas with his affliction. 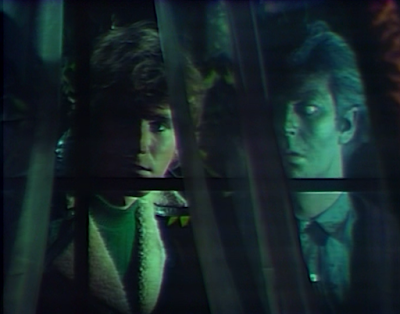 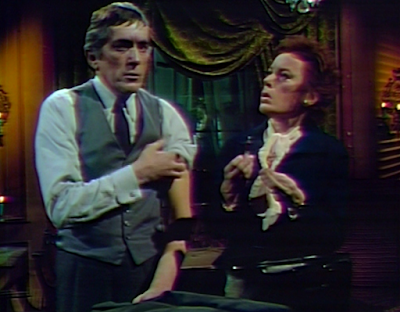 Jeb arrives at Collinwood and asks Elizabeth to stay with Megan, and ensure no one gets into her room. He adds if Barnabas should come to Megan, she should not be alone with him. He leaves, and Elizabeth finds Megan in the drawing room, whimpering. Elizabeth gets her an afghan to keep her warm. Megan says it's just her nerves. 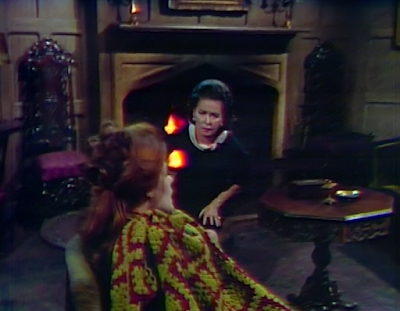 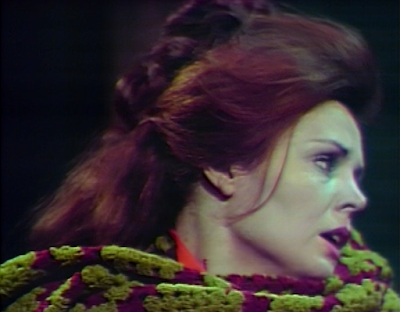 Barnabas realizes that he shouldn't have told Julia about Megan. He feels that he must have blood. He calls to her.

Elizabeth tells Megan that she must be ill. Megan gets up and says she heard a voice call to her.

Barnabas continues to call Megan, and then stops himself. 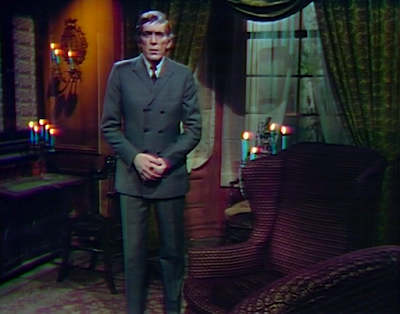 Elizabeth tells Megan that it must be her imagination. She asks what she can do for her, and she asks for a glass of water. When Elizabeth steps out, Megan gets up and sneaks out of the house.

Barnabas says he must find blood. He opens the door as Megan arrives at the old house. He tells her to return to Collinwood, and she refuses.  He tells her to go away, but she approaches him. 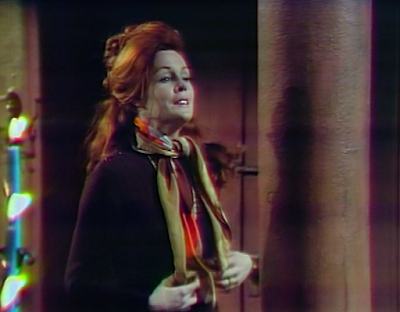 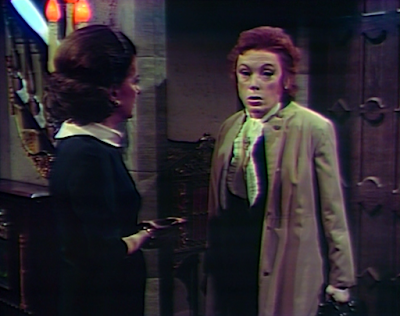 Megan says she won't let Barnabas feed on someone else. She exposes her neck to him, and he leans in for a bite. She collapses as Julia walks in on them. She checks Megan's pulse. Barnabas tells her he didn't do it by choice. 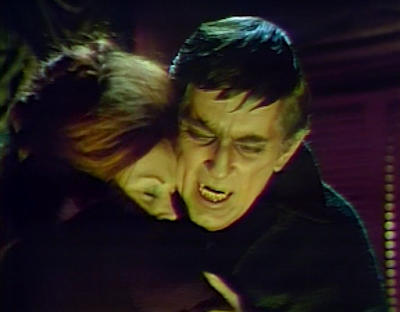 Julia tells him that Megan is dead. Barnabas reminds her of what she will become. Julia says he must deal with it before she rises. He agrees. Julia asks where they can make a stake, and he leads her downstairs. 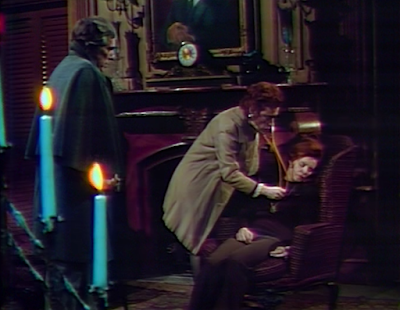 A zombie stands outside of Collinwood. Inside, Jeb tells Elizabeth that she's stupid. He tells her to go into Megan's room and stay with her. He adds that she doesn't deserve to know his plan. She dutifully heads upstairs. 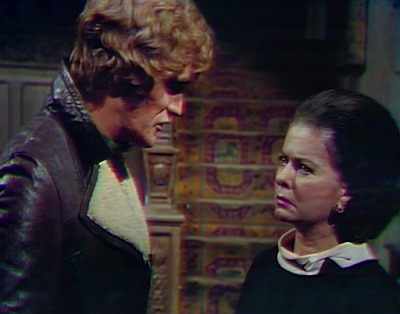 Barnabas holds a stake, and tells her she can stay downstairs. She says she'll go with him. They return upstairs to find that Megan's body is missing. 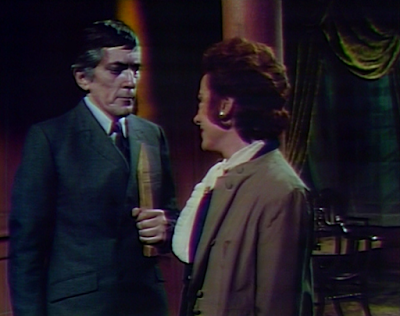 Jeb tells the zombies that they know what to do, and commands them to carry out their orders. They all shuffle back into Collinwood. One goes upstairs, followed by the second, and then the third. 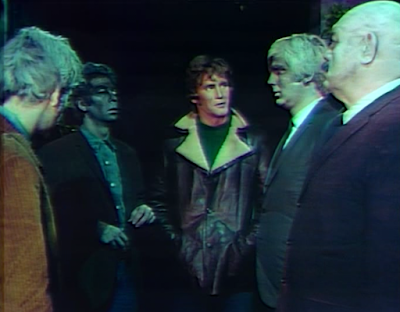 Julia and Barnabas arrive at Collinwood. Julia goes inside and heads upstairs, not noticing the zombie in the foyer, who watches her.

Julia goes to her room and turns on a lamp. She sits down at her chemistry set and prepares more serum to inject Barnabas with. She hears a noise outside her door, and when she opens it, she's confronted by a zombie. It follows her into the room, where two more step out of the shadows. One slaps her, and then picks up her unconscious body and carries her out of the room. 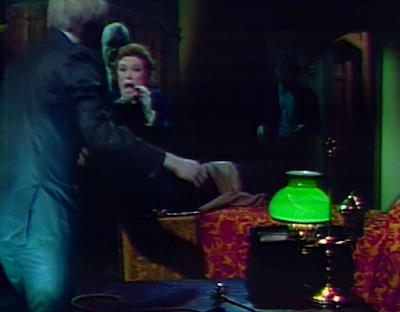 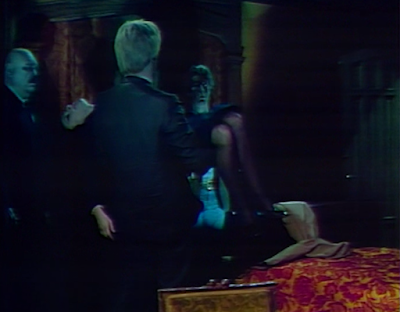 John: Poor zombie Thomas really struggled to get out of the earth... Playing dead is a tough job! It's interesting to note that when Jeb lists off their intended victims, the closed captioning incorrectly refers to 'Willie Collins.' 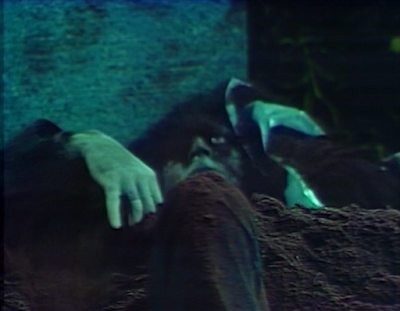 Christine: It is tough when you're buried with a protective face mask that just won't come off. Poor Amos Ross got yelled at for not falling in line fast enough for zombie roll call. Emory Pace wins for most ungraceful zombie rise. 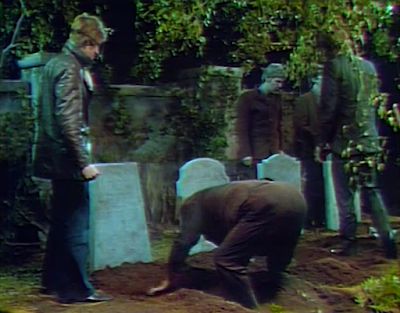 John: Do you think Barnabas was upset about biting Megan only because Julia caught him doing it? And why would such a brief bite lead to her death? Or not, as the case may be. Since Megan wasn't on the hit-list of the undead that Jeb spelled out for them.

Christine: No, I think Barnabas was truly upset because he did not want to kill Megan and felt powerless to control his bloodlust. I don't think it was the size of the bite, but the fact that he's indulged himself on her blood too frequently. I seem to remember when he was going to make Maggie his vampire bride that the rule was the third bite makes the vampire. It isn't the first time Julia has incorrectly declared someone dead, so there is a possibility Megan is not dead yet.

John: Holy zombie bitch slap, Batman! If nothing else, you would think that Julia might have smelled the dead corpses hiding in her room before they ultimately attacked her.

Christine: Well, she was working with chemicals which could have masked their rotten stench. Julia is in quite a predicament. I wonder how she'll get out of it.