Barnabas continues to review the Collinwood blueprints. Maggie returns and tells him that Quentin doesn't believe Julia is alive anymore, and has given up. Barnabas assures her they will find Julia. She says she must do what Quentin wants her to do—leave Collinwood forever. She tells Barnabas that they've got to go, but he still believes Julia is there. 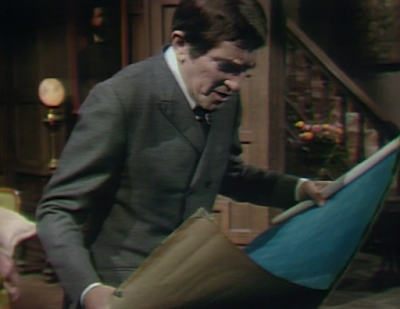 In her basement cell, Julia wonders why they haven't found her. 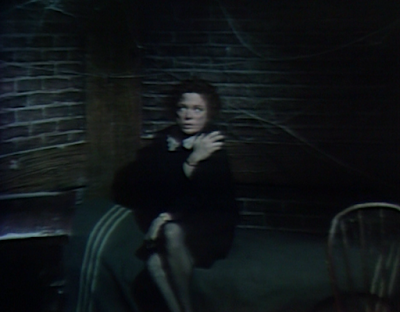 Barnabas doesn't want to leave until he talks to Quentin. Maggie tells him it's no use. Barnabas says that if Julia is there and they leave, she will die. Maggie tells him there's no proof that she's there. Maggie asks if he's seen Roxanne, and he tells her that she was there, but got away from him. 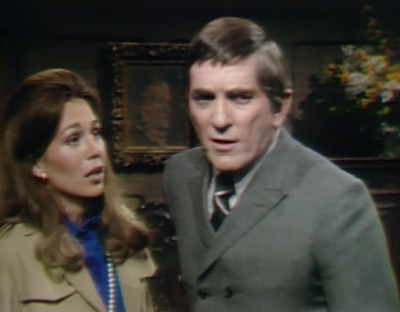 Roxanne wanders through the woods when she runs into Stokes. She tells him Barnabas didn't kill Claude. Stokes asks her if Barnabas told her that he killed Claude. He reminds her that he and Claude were close friends. Stokes brings up her psychic talent, and suggests that if she told the truth about Barnabas it would be most interesting. He says Barnabas is a man with a secret, and asks her if she knows what it is. Stokes says he conquered death and she says he used her to do it, robbing her of her life. She says she's never going to let him use her again, and runs off. 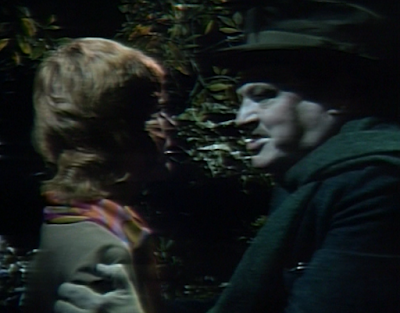 Maggie says she can't understand why Roxanne can't help them. Barnabas says if the police can determine the body is Angelique's, they won't need her. Roxanne watches from outside the drawing room window. Maggie goes to pack, and Barnabas reviews the blueprints once more.

Roxanne appears in the room with him and tells Barnabas that she's afraid when she's not with him. His lips quiver as he eyes her neck. She tells him he's not acting happy to see her. She tells him that Stokes says he has a secret, and asks him what it is. She apologizes, and says she doesn't care what it is. Barnabas tells her that he loves her, but he refuses to hold her. She tells him he's kind and gentle. He says she must go away, and that they can never be together. She asks him why she treats him like a child. He says that is the way it must be. He tells her to go, and she leaves in tears. 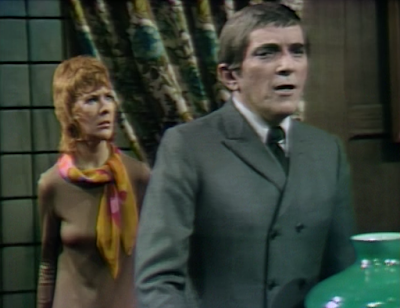 Barnabas realizes that he cannot make Roxanne like him. He turns and sees that she has returned. They embrace, and she begs him to never say no to her. She asks him to love her. He hesitates, and then asks her whatever the costs. She says whatever the cost, and he leans in and bites her neck. 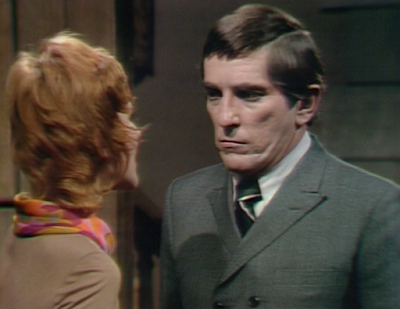 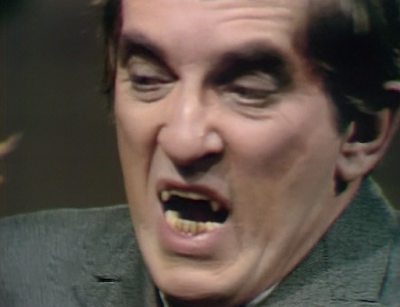 Maggie comes downstairs and Barnabas tells her that Roxanne is there, and will go to the police if needed. But first, he sends her upstairs to get something of Julia's. Roxanne calls Barnabas back to her, and tells him that she's his. He tells her that he knows she has psychic powers. She says that is why Claude was interested in her. She says she doesn't like to use them. Barnabas asks her to tell them where they can find their friend, Julia. Maggie returns and Barnabas introduces her to Roxanne. Barnabas takes a scarf from Maggie and gives it to Roxanne. She says she sees a tall woman with a white face, but she won't come in clearly. He asks where she is, and Roxanne says she's lying down... cold... dead! Maggie looks at Barnabas. 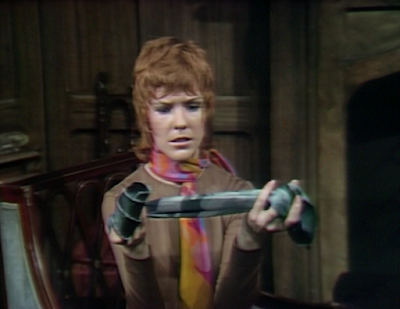 Julia wakes from what she thought was a dream and cries for someone to help her. 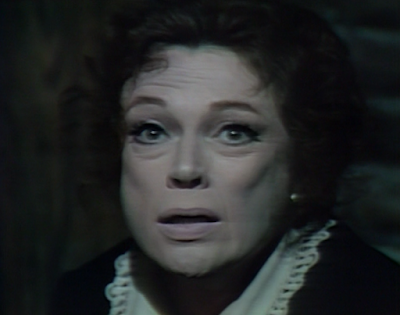 Roxanne reiterates that the woman is dead. Maggie says she told them what they expected to hear, and says they will close the house tonight. Barnabas agrees. Maggie thanks Roxanne and goes upstairs to pack. Roxanne asks Barnabas what's wrong, and he says what she told him gives him great grief. He says the woman was a true friend. Roxanne says she wants to be alone, now that she's not afraid, knowing she has him. He offers to take her to her house. She tells him that Maggie needs him more than she does. He takes her to the door, and says that if not for finding out his friend Julia was dead, it would be a very happy night. Maggie comes downstairs with a coat and no bags. She asks Barnabas if he thinks she's doing the right thing. 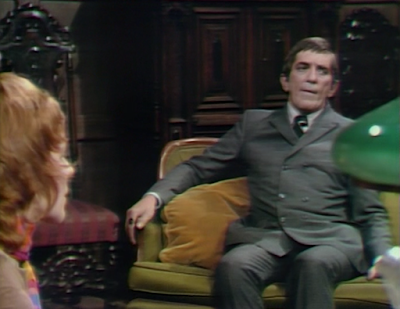 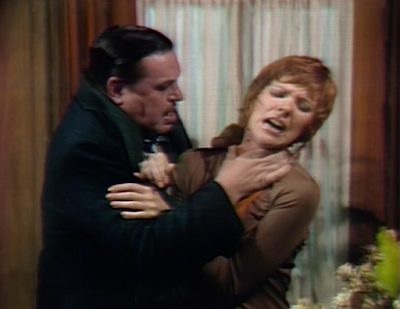 Maggie stands in the dark of the drawing room when Barnabas comes in and tells her the car is packed. She asks who will ever live there again. She asks if he believes Roxanne, and he reluctantly agrees. They step outside the house and he locks the door behind him. Maggie says it's over. All the years of Collinwood. They leave together. 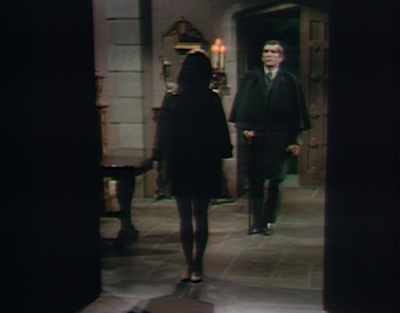 In her dungeon cell, Julia sits on her bed. 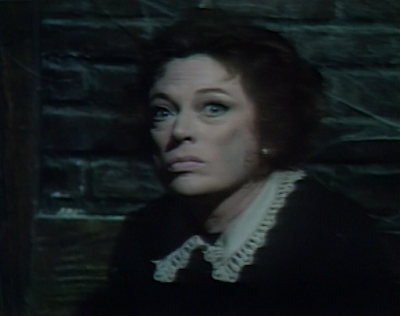 John: So what's the urgency to leave Collinwood now? Those responsible for the so-called 'curse' are all gone. If anything, they finally have a reason to stay! Interesting in that today's episode could effectively be the series finale... we'll see where we go from here, and how long it takes us to get back to our time band.

Christine: You know when the door to Collinwood finally gets locked that all is said and done. Does this mean that Barnabas has no intention of returning to his own time and his true Collins relations?

John: Barnabas and Roxanne sure have developed a torrid love affair, considering how little time they've spent together while they were both conscious.

Christine: It's storylines like these that make it very difficult to respect Barnabas. 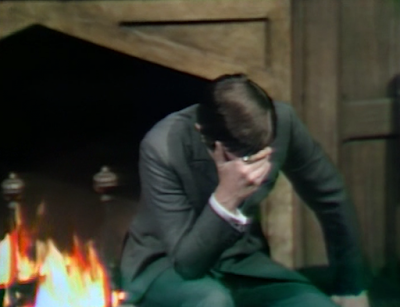 John: How did Barnabas not think what all of the viewers surely did? That something belonging to parallel-time Hoffman couldn't possibly lead them to his own Julia!

Christine: Barnabas is blinded by love. How long do you suppose it will take him to figure it out?