Julia arrives at the Loomis house. Barnabas tells her he put Roxanne back in the secret room. He says they need to find Claude North, who may be the secret to killing Angelique. She asks if that was the name on the drawing. He says that he found Roxanne in the graveyard at North's tombstone. Julia suggests that if he's dead, they won't find him. Barnabas says the sketch isn't 100 years old. He doesn't understand the connection, but he knows he's very important. 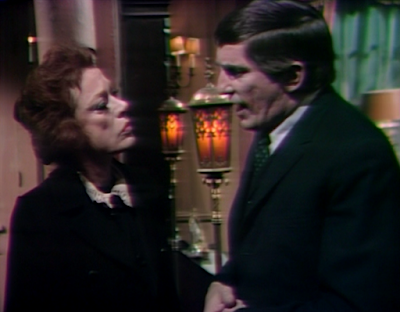 There's a knock at the door. Julia hides, and inspector Hamilton comes in. He tells Barnabas that he has some questions about Will's death. He asks if Carolyn is home. Barnabas says she's resting. Carolyn comes downstairs with a glass of brandy in her hand. Barnabas tells her she should be resting. Hamilton says he'll try to be brief. She pours herself another brandy, and reminds Barnabas that he's her cousin, not her keeper. Hamilton asks if she's satisfied that Will took his own life. Barnabas interjects, asking if he has reason to believe otherwise, and Hamilton asks him to let Carolyn answer. She says that all she knows is Will jumped from the Tower room. He asks if he might have been pushed. Carolyn says that anything is possible, and Collinwood has a skeleton in every closet. 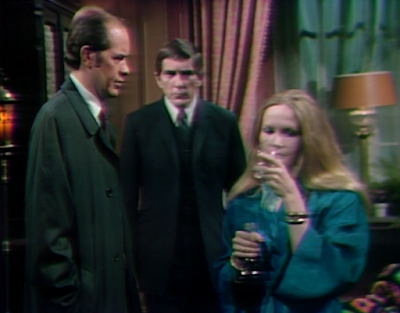 Hamilton asks if there could be any connection between Will and Bruno's deaths. Barnabas asks if the inspector believes Will didn't take his own life. Hamilton asks Barnabas if he was in Collinwood when the first Mrs. Collins died. Barnabas says he arrived after. Hamilton says he has a list of all attendees, and he's looking forward to speaking to Julia Hoffman. He says she's an old friend that he met when she worked for the Richardsons. Julia hears this from within the secret room. Hamilton asks Carolyn about Will's relationship with the first Mrs. Collins. Carolyn says that's his last question and storms off. 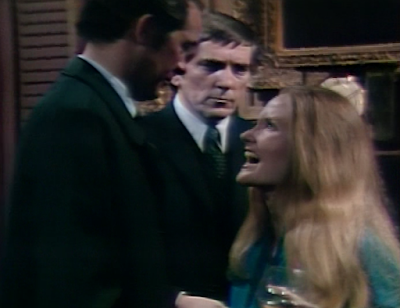 Hamilton leaves, and Julia comes out and asks Barnabas what she can do. Carolyn laughs, saying all the pretending and lies are getting sticky. Julia says she'll have to go back and try to bluff her way through it. Barnabas tells her to be careful. She leaves, and Barnabas tells Carolyn that if she keeps drinking, she's going to say the wrong thing to the wrong person. 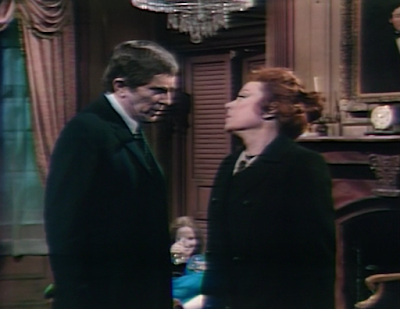 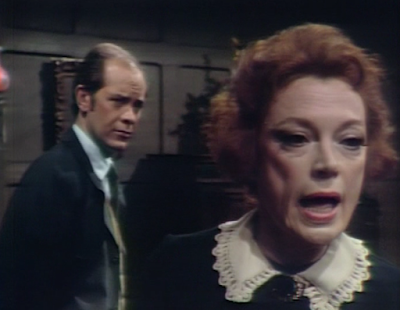 He tells her he has no further questions, and adds that it's good to see her again. He asks if she ever sees the Richardsons, and she says she does not. He says they were so fond of her, and never knew why she left. He says he and his wife shared their view. He says she was also especially considerate of Jane. Julia asks who, and he says his wife. Julia asks how she is, and he is shocked. He tells her that she knows very well than his wife has been dead for three years. He reminds her that she attended the funeral. Julia says he was talking about the Richardsons, and her mind slipped into the past. He asks her if she's been mistreated at Collinwood. He says he missed the familiar greeting she always gave him, and asks if she's forgotten that too. When she says that of course she hasn't, he asks her to greet him with it now, but she is unable. He says she must be under a strain, and thanks her for her time. She leaves. 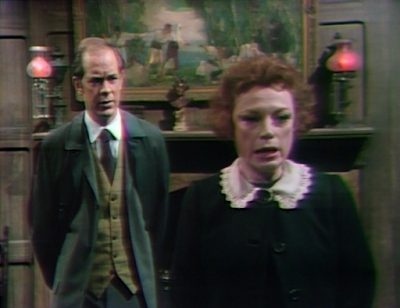 Roger tells Angelexis he is upset that the inspector has questioned everyone in the house. She wonders why he hasn't questioned her, and he says she wasn't present at the seance. She asks if he knows more than they think he does. She says there might be some interesting development with the case. 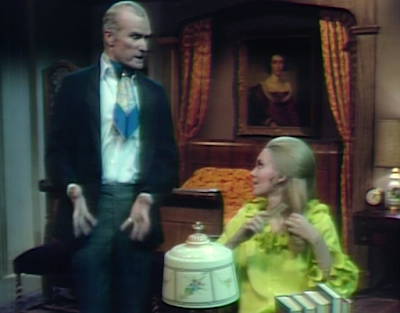 Barnabas is sitting by the fire when Julia returns. She says her meeting with Hamilton was a disaster. she says she's afraid he's got her. Barnabas asks how he could have figured out that she's a Julia Hoffman from another time. She says he can't know that, but he must know she's not the Julia he once knew. Barnabas assures her that she's in no danger as long as he doesn't question anyone else. 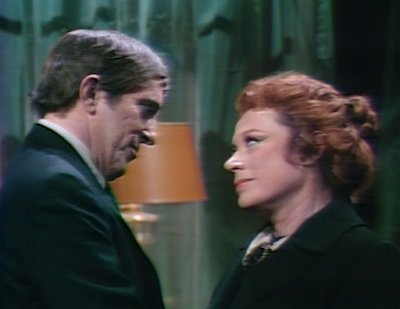 The inspector stops into Angelexis' room. He says she's the most important reason she's there. He tells her that he wants the absolute truth from her. He says that she's in trouble, and they may have to hold her as an accessory to murder. She asks what he's talking about. He says if she pretends not to know, she'll make things difficult. He says that he got a court order to exhume Angelique's crypt. When they did, there was no body there; not even a coffin. He thought that someone might be trying to keep something from him. 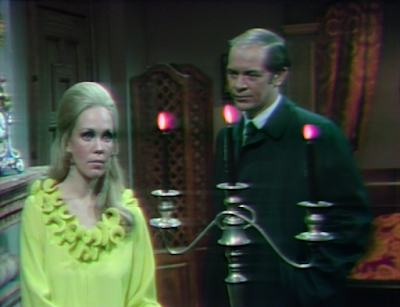 He says he then looked at Dr. Longworth's journal. It mentioned that Angelique's body was destroyed. He says it also mentioned her and Quentin, and therefore he assumes the three of them destroyed the body. She says that Cyrus and Quentin burned the coffin two months ago. She says there is something he doesn't know. She says they opened the coffin and despite her being dead for six months, her body was perfectly preserved. She says that her sister had dabbled in the occult, and had pledged to return from the dead. Hamilton dismisses superstition and says that Quentin destroyed her body out of fear that an autopsy would reveal him as her murderer. She says she knows that's not true. 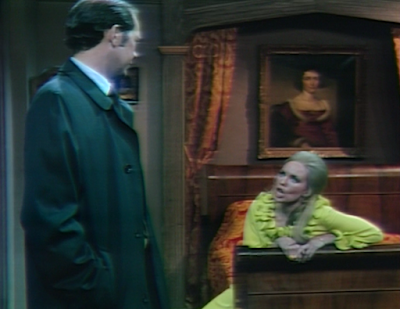 He asks her where Quentin is now, and she says she doesn't know. He asks where the remains are buried. She says they're somewhere in the woods. He tells her not to leave Collinsport, and then asks her about Julia. He asks if she's been ill. She asks why, and he says her behavior is peculiar. He mentions how she asked about his wife, despite having attended her funeral three years earlier. He says she's not like the Julia Hoffman he knows. He bids her goodnight. 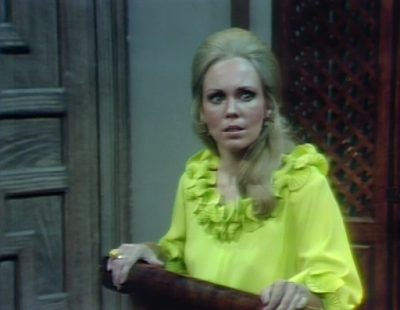 Carolyn finds Roger in the drawing room in the morning. She pours herself a drink, and he asks if she knows what time it is. He tells her that her behavior is shocking. She says the house is full of shocking behavior. Killing each other is okay, but drinking in the morning is shocking. She says drinking is the only way she can bear with terrible secrets. He asks her what secrets, and she says he'd like to know. She says that she'll tell him the biggest secret of all. She says it concerns someone he loves very much. She says she can prove that Alexis is really Angelique. 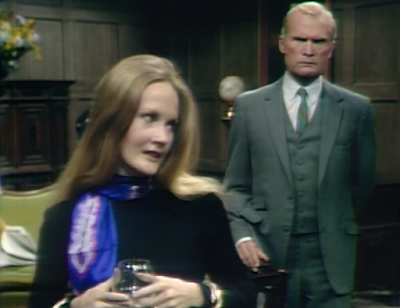 Someone standing outside the drawing room hears her say this. 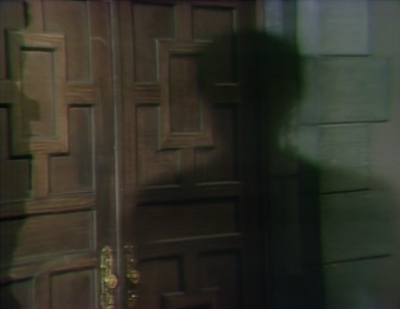 John: What a stroke of luck that the investigator of Will's death is an old chum of Julia's! Now, it would be one thing if Julia just needed to fool an old acquaintance, but a police inspector? Perhaps she's counting on parallel-time police in Collinwood to be as dumb-witted as they are in her time band.

Christine: It sounds to me like they may have been more than just friends. I was really hoping she was going to come up with some funny greeting to try out on him.

John: Julia almost got away without putting her foot in her mouth. I love how Barnabas is willing to express that he can't imagine how the inspector could have figured out Julia was transplanted from another time band. What's funny is that the only place where I can imagine an inspector reaching that conclusion would be in Collinwood!

Christine: Not good old Inspector Hamilton who wants to hear nothing about Angelique's interest in the occult and refuses to further investigate how her body could have remained perfectly preserved.

John: Hamilton has proof that Angelique was involved in the destruction of her sister's body, but lets that slide? Seriously? I guess he is truly one of Collinsport's finest. But at least he was able to let Angelique know that Julia is not the Julia that he knew. Useless information, unless you have an awareness of parallel-time...

Christine: If Hamilton is the one lurking outside the drawing room who just heard Carolyn say she can prove that Alexis is Angelique, then he may not let her participation slide after all. Julia probably should have snuck into the parallel portal room and disappeared before being questioned, but she definitely should beat a hasty retreat now. Unfortunately, her love for Barnabas will keep her in harm's way in parallel time as long as Barnabas remains. And why are they staying anyway?  It's time for them both to cut and run. 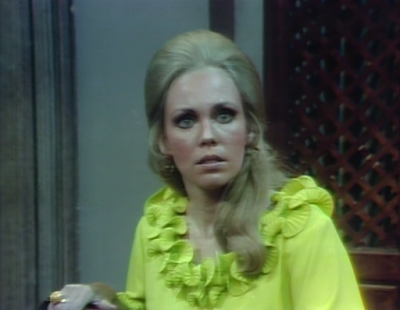