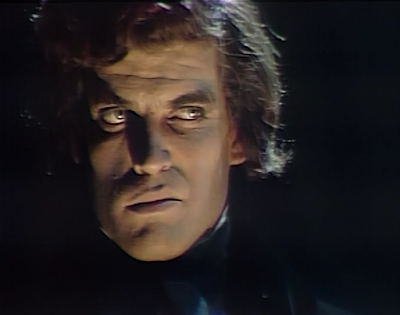 In the ruins of Collinwood, Julia goes into the playroom in the dark. The door slams shut behind her, and she can't get it open. She turns to see the mysterious man watching her. She asks him what he wants. He says nothing. She tells him to stay away from her, and he approaches her. She begs him to stop looking at her. 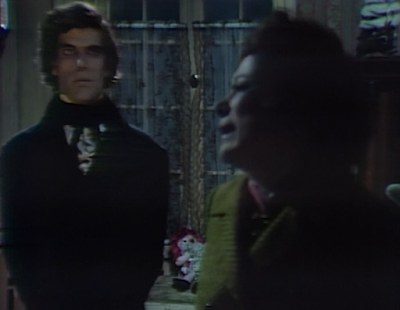 Barnabas rises from his coffin and goes upstairs in the old house. He finds Stokes sitting in the dark, waiting for him. Barnabas asks what he's doing. Barnabas asks where Julia is. Stokes says he's surprised that Barnabas didn't hear him calling when he arrived. Barnabas makes up an excuse for being in the basement. Stokes says he was unsuccessful in getting Carolyn to remember what happened. Barnabas tells Stokes he wants to ask him about two other ghosts in Collinwood. 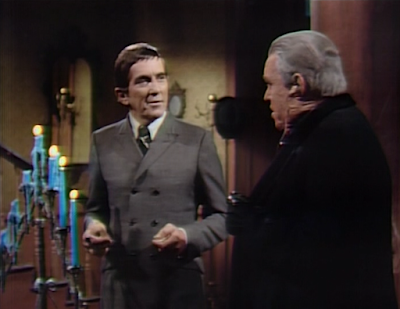 Julia comes downstairs in Collinwood. The mysterious man remains at the top of the stairs. She leaves.

Barnabas tells Stokes that he doesn't think he's being honest with him. He asks about two children being on the estate—David Collins and a young girl. Ghosts. Stokes says he knows nothing about them. Barnabas asks him about Tad and Carrie, and Stokes denies knowledge of them. Stokes says there have never been children with those names in Collinwood. Barnabas says Quentin insisted that David was Tad, and also mentioned a woman named Daphne. Stokes is shocked to hear that Barnabas spoke to Quentin. 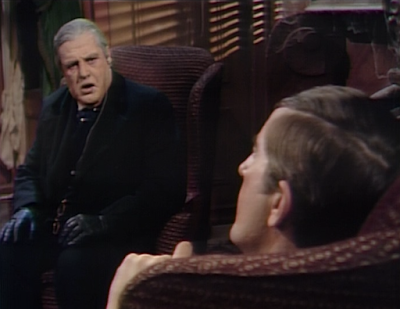 At that point, Quentin comes downstairs and attacks Stokes. Barnabas pulls him away, and asks why he's attacking him. Quentin says that Stokes' exorcism failed. He says he raised the ghost's wrath. Stokes runs out, and Barnabas holds Quentin back. Julia returns to the old house and says she saw Stokes rushing through the woods. Barnabas tells her that Quentin says Stokes attempted an exorcism that brought down the wrath of the ghost on Collinwood. Julia goes upstairs. 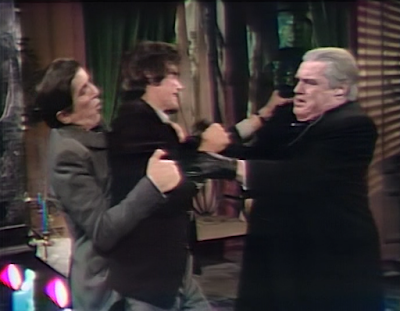 Julia comes downstairs and tells Barnabas that Quentin is asleep. Barnabas says he's convinced that the evil spirit is responsible for all that has happened in Collinwood. He says he'll arrange for another exorcism. Julia says that he can't, that it's too dangerous. Barnabas asks how she knows, and she fumbles about, saying it's how he made her feel. She says it didn't work when Stokes tried it. She says she has something to tell him. She then sees the man outside the window, staring at her. She starts, and then says it's nothing important. He tells her to be careful when he's not with her during the day. He asks where she was at sundown. She tells him she went for a walk. He asks if she went to Collinwood, and she says she's not that foolish. They hear a noise upstairs, and Barnabas goes to check on Quentin. Once he's gone, Julia writes a note and then leaves the old house. 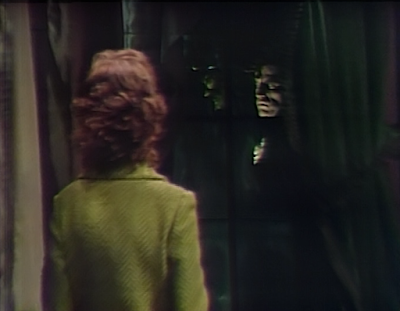 Barnabas brings Quentin downstairs. He doesn't see Julia, but he finds her note. It says she's gone out. Barnabas wonders where she could have gone.

Julia returns to the children's playroom in Collinwood. She asks who's there, and a figure steps out of the shadows. Julia asks who it is, and music starts to play. The person disappears, and the mysterious man is standing in the doorway. She asks him who it was. He says nothing. She asks him why he sent for her, and realizes he thinks she'll tell Barnabas. She swears that she won't tell. 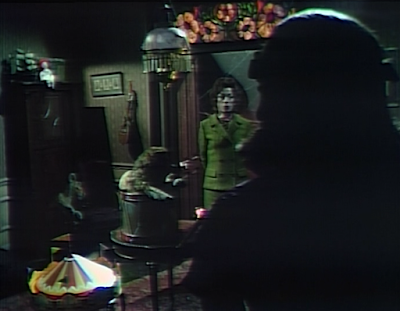 Stokes asks Barnabas if he's sure Quentin won't come back down, and he assures him that he won't. Stokes says Quentin's current state is the result of all that has happened at Collinwood. Barnabas suggests the solution is another exorcism.

Julia asks what he wants of her, and then says she understands. 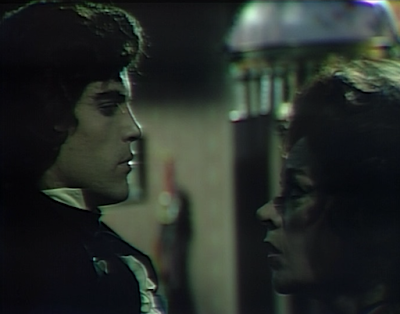 Stokes begs Barnabas not to attempt another exorcism, but offers his help in the event that Barnabas does.

In the woods, Stokes sees Julia and a man. He asks who it was, and she says he must have seen leaves and shadows. He offers to walk her back to the old house, and she respectfully declines his offer. He's sure there was someone with her. The mysterious man watches from a distance. 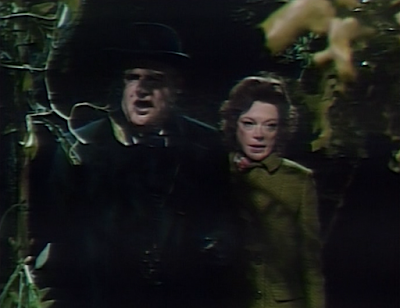 Julia goes upstairs to check on Quentin. Barnabas tells her that Quentin and Carolyn are suffering, and he needs her help with them. She points out that he cares about his relatives very much. She suggests that they get away, and try to return to their own time. He asks her if something happened to make her feel this way, and she says she'll say with him. She goes upstairs, and Barnabas smells lilacs. He asks for the spirit to appear to him. A woman materializes and he asks her to speak to him. She disappears, and he begs her to come back. He finds a note that says, "She will die!" 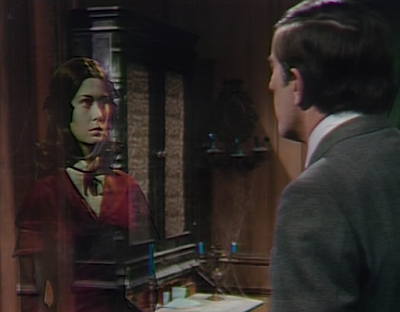 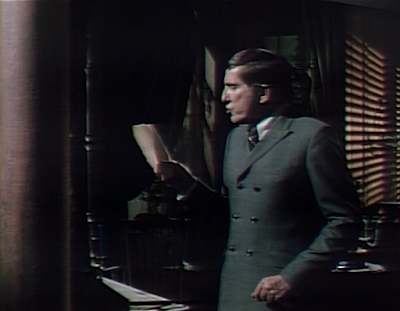 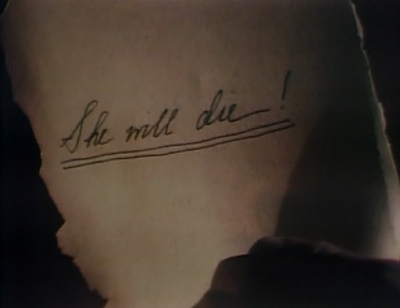 John: The Angel appears (well, a few years ahead of her attaining that status)! Welcome to Collinwood, Kate Jackson! I've long known that she was on the show, but didn't know what role she'd play. It looks like she's our mysterious Daphne (to start). She appears to be wearing period clothing, so I'm not expecting we'll see her in 1970... but expect there's another flashback in our future (because surely there's more opportunities to re-write the Collins Family History.

Christine: How long before Barnabas falls in love with her?

John: As much as I loved the creepy, silent ghost of Quentin, I'm getting rather frustrated with the silent scowling ghost of Gerard. Say something already! Or do something.

Christine: Your frustration is understandable since we've already been through the silent ghost treatment before. Did they think we forgot all about the Quentin and Beth storyline or did they assume we enjoyed it so much the first time we would like it even better the second time around? I wonder if David got out the antique phone and dialed-a-ghost again.

John: Clueless Barnabas can't seem to recognize when Julia is under someone's spell. And Julia certainly seems to be warming up to the scowling ghost of Gerard. Maybe she's finally considering giving up on Barny and finding a more willing partner to share her life with... 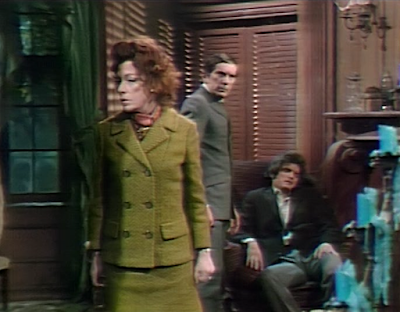 Christine: I mean...who can blame her? At first I thought she was possessed, but maybe she's just under the spell of that sexy pout. 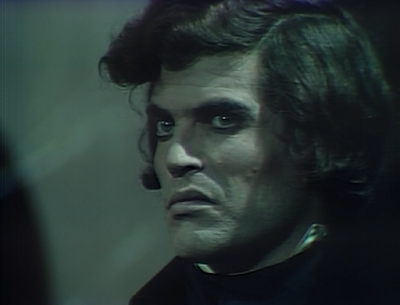 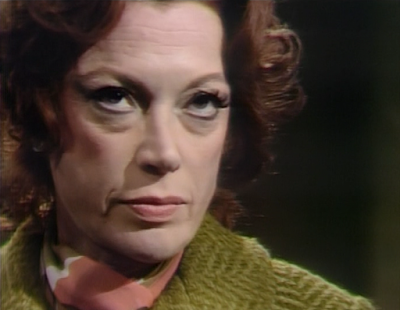 This episode contains my favorite line in the entire series when Quentin says "even my teeth hurt." I don't know why, but that line always struck me in an odd way. Maybe Gerard put a spell on me!?!