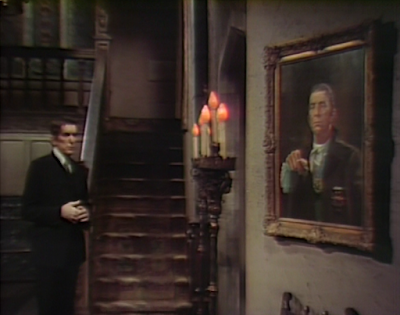 Julia tells Barnabas that she has to talk to him. He tries to avoid her, but she tells him she opened Michael's grave and found an empty coffin. She asks if that means anything to him, and he says it means nothing. She says she pronounced him dead two weeks ago, but it was clearly faked. She says she doesn't know how, but she knows why, and demands that he tell her everything. He agrees to tell her the whole story, and asks her to come with him to the old house. 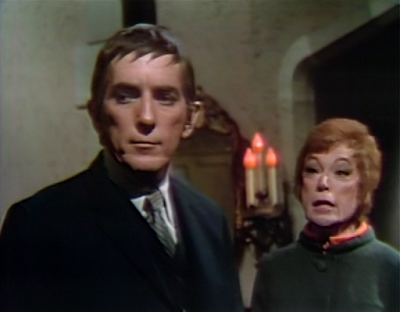 Barnabas starts with the fire at Tate's studio. He says he went looking for Quentin's portrait, and found Petofi's glasses, and thought he might be dead. Tate showed up and blamed him for destroying his studio. He tells Barnabas to leave or he will kill him. Barnabas says he's there to find out if Petofi died in the fire. Barnabas asks if he thinks the fire also consumed Blackwood. Tate says he doesn't know, and he says he doesn't care. Barnabas asks him about the portrait of Quentin, and asks if it was there. Tate tells him that he did steal the portrait of Quentin, and now it won't do him any good because it was there. Barnabas realizes that the curse will return to Quentin. 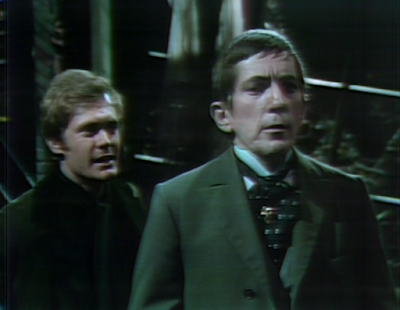 Barnabas tells Julia that Tate agreed to paint another portrait of Quentin that night, but he lied. Julia says that she was with Tate when he died a few nights ago, a victim of Chris Jennings as the werewolf. She adds that Quentin's portrait hadn't burned in the fire. She has it. She tells him she got it from Angelique. She adds that Angelique is happily married and has given up her powers. Barnabas continues his tale, saying Kitty went to the old house to plead with the portrait of Josette to release her from its spell. He found her, and they agreed to marry that night. 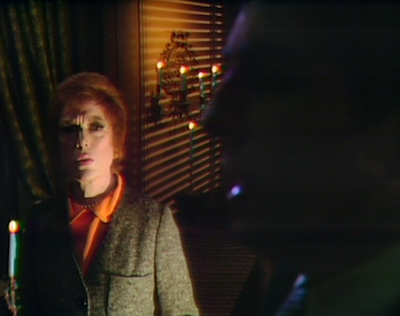 In the old house Kitty thinks about how long she has known Barnabas, and wonders what's taking him so long. She decides that she must find something more suitable to wear, and she finds one of Josette's dresses. She realizes that the dress will make her Josette forever, and she casts it aside. 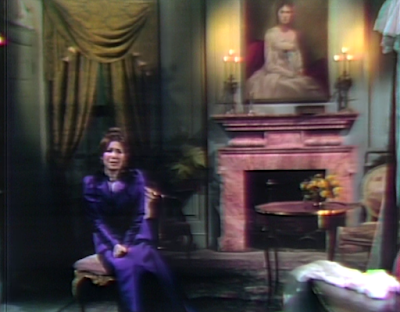 Barnabas hears Josette calling for him, and rushes back to the old house.

Kitty is wearing the wedding dress, and is slowly pulled into the portrait of Josette. Barnabas reaches for her as she was almost gone. He tells Julia that the power of the portrait was too great. He grabbed on to her, and followed her to wherever fate would lead them. He then realized he was being taken back to an earlier time, when Josette was to die on Widow's Hill. He says he got to the hill in time and saved her. They arranged to leave that night. 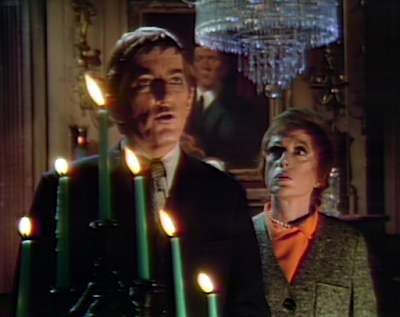 Barnabas found himself lost in the woods, where he stumbles across an altar that hadn't been there previously.

He tells Julia that is when he met Oberon of the Leviathans. He says a second figure closed in on him and subdued him. He awoke later, and Oberon explained to him what had happened.

Barnabas wakes, and Oberon says that since he has mastered travel through time, he will allow the Leviathans to live again. He says they are almost extinct, but there will be a resurgence when a new leader marries a human and brings forth a new breed. He tells Barnabas that he will not see Josette again until he helps them. He must take their seed to the future and nurture it. He says that if Barnabas disobeys, Josette will die, he will never see her again, and he will be forced to live as a creature of the night. 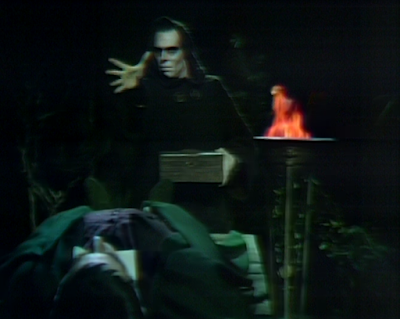 Oberon tells him that Josette is safe as long as he serves them. He gives Barnabas the Leviathan box, and tells him he will follow the rules of the great book. He will guide and teach the child, and preside over the wedding ceremony. He says he must never question or doubt him. Barnabas agrees. Oberon reminds him that there is a terrible penalty for disobedience, and while he will forget what that is, he will regret the day they remind him. 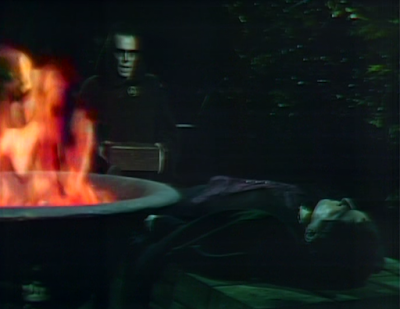 Barnabas tells Julia that they then treated him as there leader. Julia asks about the box he brought back, that sounded like someone was breathing. Barnabas says it took form when the Todd's opened the box. Julia realizes the baby in the antique shop originated in the Leviathan box, and the different names were only to explain the rapid growth. She realizes it's upstairs in the antique shop. Julia asked about its form—the form that killed Paul Stoddard and the Sheriff. Barnabas says it's hideous. He says it's currently in the form of Jeb, and it has resisted his control. 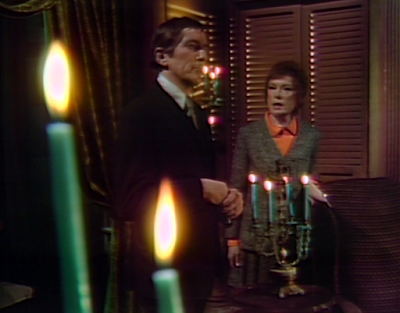 Julia asks if they could have lied to him about Josette. He says yes, but he defied them once before, when they wanted him to kill Julia. They made him a vampire for one night. She mentions that she's still alive, and he says he found that killing is forbidden in their book. He says they can control people through dreams, but they weren't able to control Julia, but they do have David, Amy and Elizabeth. Barnabas says Carolyn is in danger, as the Leviathans granted Paul wealth and power 20 years ago in exchange for his most valuable possession–Carolyn. To recreate the Leviathan race, there is to be a ceremonial marriage between Jeb and Carolyn. Carolyn would be transformed into a creature like Jeb. Julia says they can't let it happen, but Barnabas says he doesn't know how to stop it. He says Jeb has plans to destroy her and Maggie and Amy. Barnabas says that Jeb can create an army of the dead. 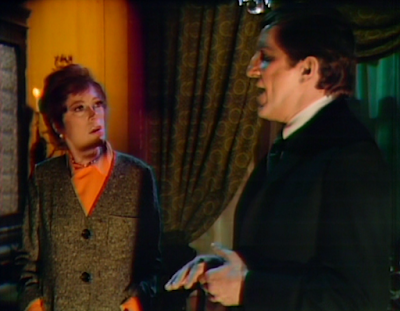 At Sheriff Davenport's grave, the earth trembles and a hand breaks free, clutching at the sky. 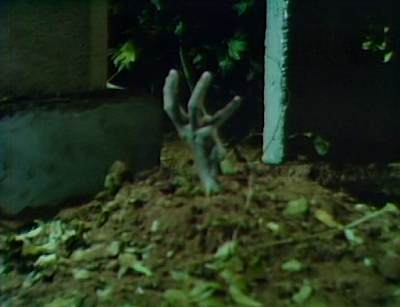 John: Holy exposition, Batman! How long have we waited for all the info Barnabas lays out for Julia in one sitting! Nice to finally have some loose ends tied up. Was I asleep at the wheel when they announced Barnabas was only a part-time vampire? We almost need a vampire tracking symbol to keep tabs on whether he's human or the undead. 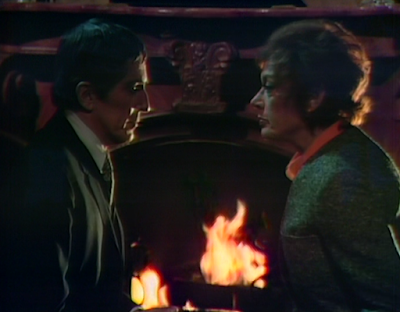 Christine: It might have been nice if Oberon had explained the Leviathan plan a little more clearly back in Episode 886, which could have saved us all a lot of confusion. Barnabas is not a part time vampire, but if you refer to Episode 915, you'll remember that Adlar the Leviathan showed up in a dream after Barnabas refused to kill Julia, to remind him what it was like to be a vampire, informing him that it would become permanent if he continued to disobey.

John: Interesting that they left the possible return of Petofi up in the air... Do you think the Leviathans actually have Josette stashed away somewhere? Not that I see any potential for a happy ending there.

Christine: We saw Josette collapse and appear to die after taking poison in Episode 886. There is a possibility the Leviathans resurrected her and took her to an underground lair, though I don't see why they would bother when they could just tell Barnabas they had her, and that, in addition to the vampire threat, was enough to keep him in check.

John: Zombie action! Does the return of Sheriff Davenport also signal a possible return of Paul Stoddard! Let's hope so!

Christine: It was about time we got around to the zombie genre! You may be interested to know that the zombie hand is credited to George DiCenzo, who you may remember from Back to the Future, as well as numerous TV appearances. This is where he got his start. Incidentally, I had to laugh at Sheriff Davenport's gravestone. Did nobody know the poor guy's first name, or did his name inspire his occupation? 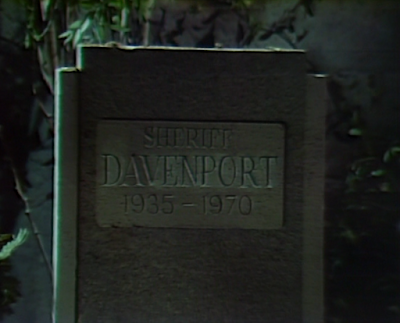 I mostly remember George DiCenzo for his portrayal of Vincent Bugliosi in the TV movie "Helter Skelter." I'd forgotten he was even in "Back To The Future"! He was an associate producer on "Dark Shadows" and also did a lot of voice work over the years.