Philip leads the sheriff and Julia upstairs. The sheriff asks whose room is at the top of the stairs, and Philip says it was the room of the child who died. He swears that there's nothing in there, and asks them not to defile it. The sheriff tells him that they're definitely going into the room at the top of the stairs. He draws his pistol, opens the door, and a man stands before him. The man says, "this seems like it's going to be a very exciting place." 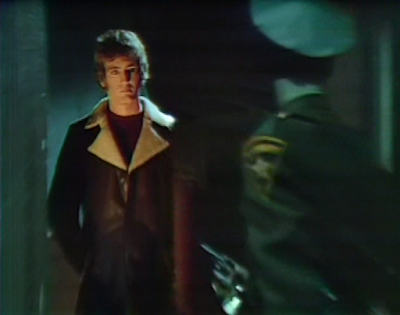 The sheriff enters and asks what the man is doing there. He tells him that it's his room. The sheriff asks Philip, but the man says Mrs. Todd rented the room to him when Philip was out. He says he likes the windows being boarded up. He says he's a photographer named Jeb Hawkes. The sheriff asks him how he found the place. Jeb says he came in and Mrs. Todd suggested he could stay there. He says it's cool having a gun pointed at him on his first day in town. The sheriff tells Philip he'd like to see some other areas. Jeb tells Philip that he'll split if he doesn't want him to stay. Philip takes the sheriff downstairs. Julia stays and asks Jeb how long he plans to stay. He tells her to quit staring at him, and stop asking so many questions. She offers to shake his hand, and when he does, she looks for the birthmark. 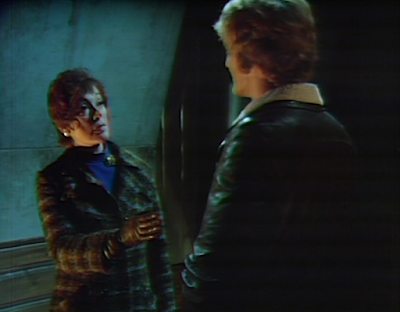 The sheriff and Philip come upstairs, and the sheriff agrees there was nothing odd in the basement. Philip offers to give him a tea strainer for his wife, and when Philip leaves to get it, the sheriff picks up something off the floor. 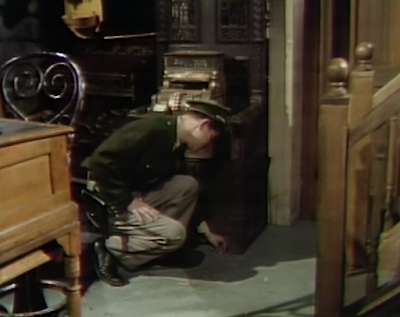 Julia returns and says the man is rude. Philip returns with the tea strainer and tells Julia that if she's ever looking for anything, she should ask him, and he can save her a lot of time. 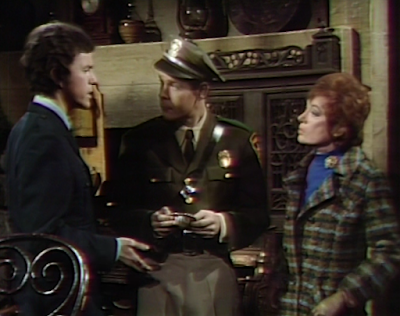 After they leave, Jeb comes downstairs. He says Philip wasn't so brilliant upstairs. Jeb calls him an idiot. Philip says if he knew what his plan was, maybe he wouldn't be such an idiot. 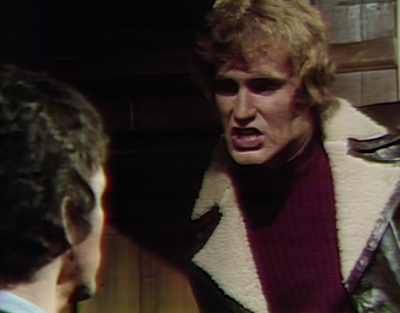 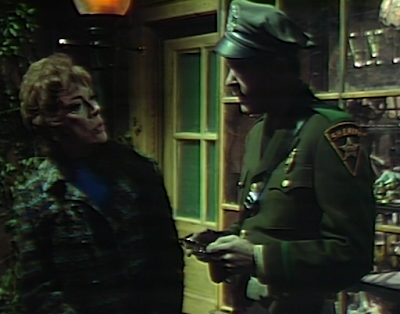 Jeb looks in the mirror, admiring himself. There's a knock at the door and he tells Philip to answer it. Barnabas comes in and tells Jeb that he shouldn't have done it. He excuses Philip, and says he saw the sheriff leave. Barnabas says he had no right to kill Paul Stoddard. He says that they needed him. Jeb says he hated him, and he had to go. Jeb asks when Barnabas can bring him Carolyn. He says she's at Collinwood under heavy sedation because of the loss he caused her. 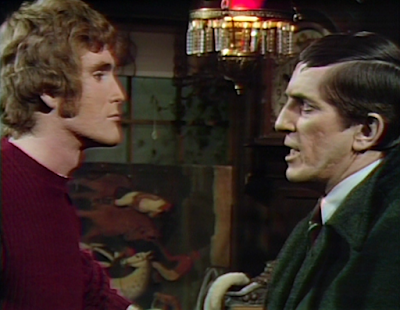 Jeb asks again when Barnabas can bring her to him, and says it had better be soon. Barnabas tells him not to kill anyone. He says Paul Stoddard sold Carolyn to them to be his bride, and according to the book he needed to be there to give her away. Jeb asks if he's so concerned about Carolyn, he can give her to him. Jeb says that he can tear up the book. He says he's an adult now, and he wants Carolyn—fast. 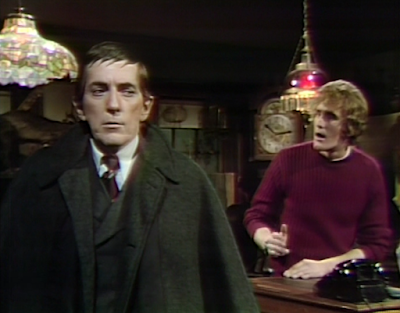 Quentin is drinking when Julia arrives. She asks about Amanda. He says he had a chance to save her, but he failed. He says when he lost her, he found himself back in his room. He says the clerk downstairs said Olivia had never registered here. Julia suggests that all traces of her second chance at life must have disappeared. Julia tells him that there's someone he knows who needs his help desperately. Julia finished telling Quentin about Barnabas changing after returning from the past. Quentin whines about losing his love, and seeing his portrait. Julia tells him that he's the only one capable of doing what must be done. He asks how he would explain himself returning... 100 years old and once a ghost who tormented children. He thanks Julia for helping him, but asks her to leave him alone. He promises not to go anywhere without telling her. 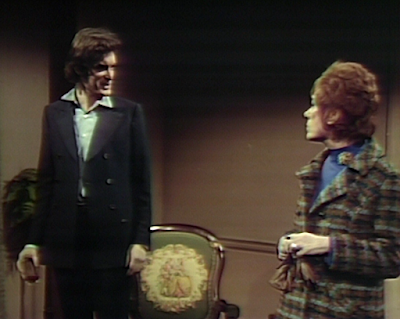 The sheriff returns to the antique shop. Jeb is the only one there. The sheriff asks if Jeb just met the Todd's. He suggests that Jeb get another room, and other friends. After he leaves, Jeb tells Philip that he must have done something wrong. Jeb then adds that he'll save him again. He says he's going out to take care of things. 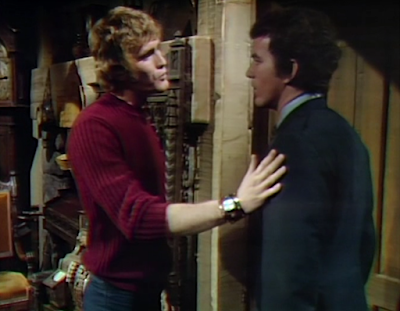 Barnabas returns to Collinwod and asks Julia about Carolyn. She says she'd feel worse if she knew how her father really died. Barnabas begs her not to be concerned with things she cannot control. Julia says she knows he's in trouble, and offers to help him again. He tells her the situation is far worse than she can imagine. Julia says that she and the sheriff searched the Todd's antique shop. He found a burned cufflink matching Paul's, and he intends to find out what that means. She says Barnabas could go to the sheriff and tell him what they know. She says she thinks he'll do that before going to the Todd's. 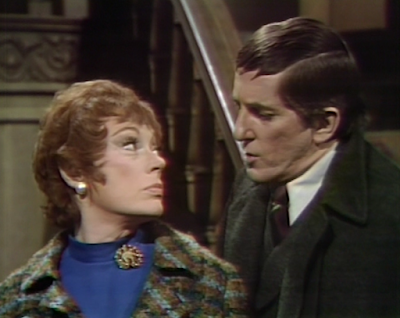 The sheriff is looking at the burnt cufflink in his office. He turns off the light, and hears the door open. He then hears heavy breathing and sees something that horrifies him. He tries to fight it. 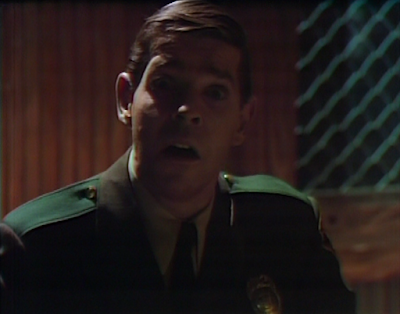 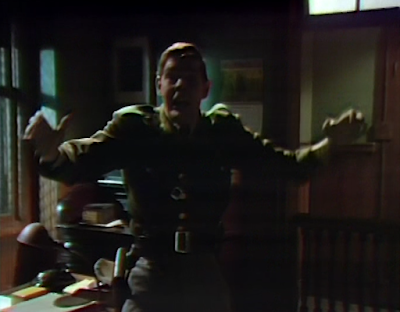 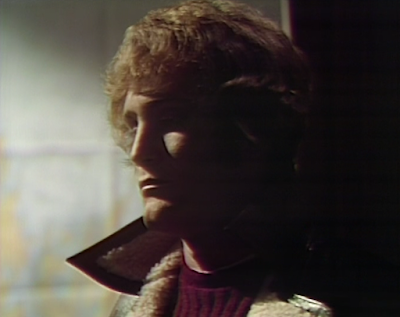 John: Wouldn't you think Jeb's presence in the room would be more concerning to the sheriff? Couldn't he be the thing behind the door that was responsible for Paul Stoddard's death? Was he not a suspect because he didn't match the image of the 'monster' they were looking for? He came across as a monster to me! The fact that Julia knew to look for the birthmark indicates that she knows what Jeb is...

Christine: The Sheriff really should have recognized the slime oozing from Jeb Hawkes when he spoke.

John: Once again, Julia's special power seems to be retaining memories forgotten by everyone else. If all traces of Olivia were wiped out, wouldn't you expect that they would be wiped from Julia's memory as well?

Christine: How interesting to consider that Julia may also be a supernatural being with considerable powers. Just like that, Amanda Harris is done and gone, freeing Quentin up to compete with Jeb Hawkes in pursuing Carolyn.

John: So the sheriff didn't bother to draw his gun, or run out of the room, when confronted by the Leviathan monster. Too bad, as Barnabas was right outside and probably could have saved him. I wonder if his wife will still get the tea strainer...

Christine: It certainly was amusing the way he tossed the furniture about his office when his firearm was so close at hand. A new hunk is in town with hip lingo, a nasty attitude, and a bad boy leather jacket to boot. So this is the Leviathan's best hope for the continuation of their race. They are doomed. 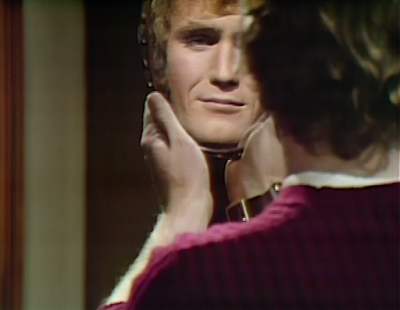 The last paragraph reminds me of a comment in The Twilight Zone Companion about the episode "Black Leather Jackets," where the alien spies in a suburban neighborhood for some reason disguise themselves as a biker gang. The book points out that that's about the best way to DRAW attention to themselves. But maybe they were "hiding in plain sight," and maybe so is Jeb.