Philip mentions that it's dark out, and Megan says it's quiet without Michael. He reminds her that he's dead. They hear footsteps, and Michael comes downstairs saying he's decided not to go through with it. 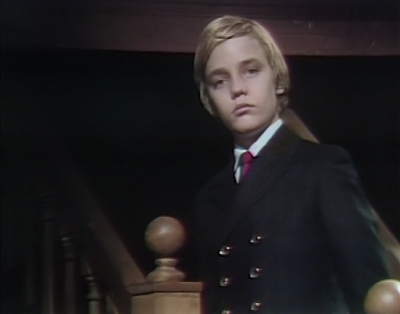 Philip tells him to get back to his room. Michael argues with him and Megan intervenes. She tells Michael it's too late to change his mind, and he must go back to his room. She says it will be bad for all of them if he is seen again. Michael refuses to return to his room. Philip grabs him and carries him upstairs. The phone rings, and it's Carolyn. She suggests that she and Philip might want to join them at Collinwood for the evening. Megan tells her she'll talk to Philip and call her back. 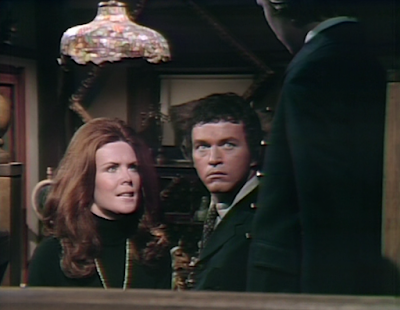 Philip locks the door behind which the heavy breathing continues. Megan comes upstairs and asks if Michael is alright. She says he's terribly angry with them, and asks what if he tries to leave the room again as he gets bigger and stronger. Philip says he'll put a heavy bolt on the door. 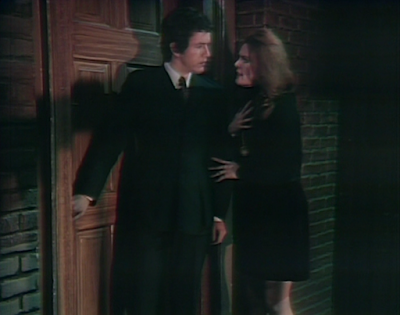 Paul sneaks downstairs to the drawing room. He finds a gun and puts it into his pocket. Carolyn walks in and asks how he's doing. He says he's better, but he hasn't been taking his medicine, because he's allergic to it. He asks her not to tell her mother she saw him downstairs. He then asks her to bring him some food, and not to let anyone know she's doing it. He says they've been sneaking the medicine into his food, and he'll only trust food she brings. He goes back upstairs. 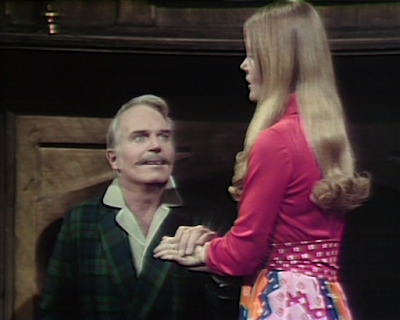 Paul returns to his room and is surprised to find Barnabas there. Barnabas tells him to listen to him, and Paul draws his gun. Barnabas says he's here to help him. Paul refuses to believe him. Barnabas tells him to look at the bed. There's a box on it. Barnabas says it's his clothes that were taken from him, along with enough money to get him out of Collinsport and far away. He says he's helping him escape before any harm comes to him. Paul says he's more concerned about Carolyn, and Barnabas promises to protect her. Paul asks if that means she's no longer part of the plan. Barnabas tells him not to ask questions, but to believe him. He gives Paul an hour to get ready, and says he'll get him out of the house without anyone seeing him. After he leaves, Paul smiles thinking that he fooled him. 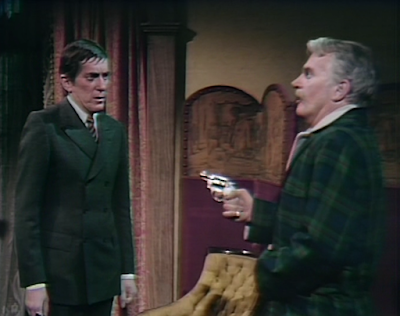 Philip finishes putting a new bolt on the door to Michael's room. He then tells Megan that the will go to Collinwood as asked.

Elizabeth smells the contents of an bottle, and then affixes a label to it. Carolyn enters, and her mother tells her she just got some new medicine for her father. Carolyn offers to take it to him. She goes upstairs as the Todd's arrive. 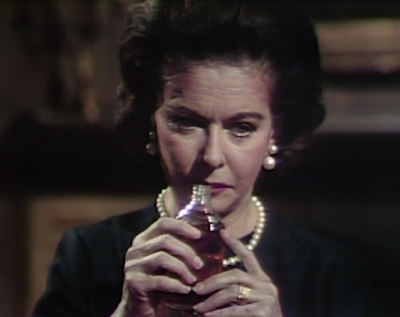 Elizabeth asks if everything went alright after the funeral. Philip says they had a problem with Michael, but they've locked him back in his room. Elizabeth offers a drink to celebrate their deception. 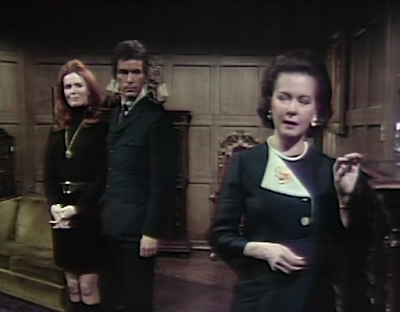 Paul is dressed and counting money. Barnabas tells him to hurry. Carolyn knocks on the door. Barnabas hides and when Carolyn enters she asks why he's dressed. Paul says he has to get out for a few hours. She asks where he's planning to go. He says maybe the Blue Whale. She asks if he's planning to leave Collinwood. He asks if she thinks he's going to run out on her again, and promises he won't desert her again. She says she needs 30 minutes because the Todd's from the antique store just arrived. He agrees to meet her on the terrace in a half hour. She leaves, Barnabas comes out, and he tells Paul to give him 10 minutes to give him a chance to get out. 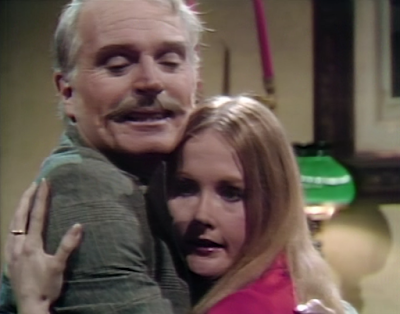 Elizabeth and the Todd's talk about their pride in being responsible for Michael. Elizabeth says that Barnabas told her the Collins family money and prestige will help. Barnabas enters and closes the door. He says her curiosity seems to be nagging at her. She says she just wants to know what their ambition was. Megan says they're waiting for him, and she asks what they hope to accomplish after he arrives. Megan says they must be prepared to accept whatever is in store for them. Elizabeth says that as part of her old life, Carolyn is very dear to her, and she's worried about what's to become of her. She wants her to share the experience with them, and become one of them. Barnabas recoils and says he's also very concerned about Carolyn's future. Megan asks Barnabas if he's feeling well. 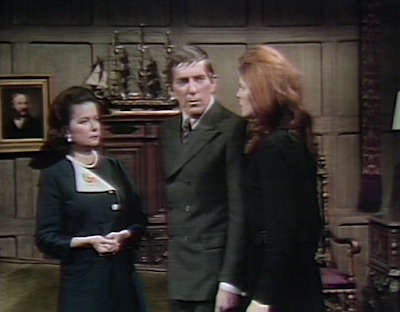 Carolyn joins them in the drawing room. Megan cries crocodile tears. Barnabas is looking in the foyer as Paul sneaks downstairs. He says there's no one there and closes the door.

Carolyn suggests that Megan and Philip stay the night, but Megan says they must get back to the shop after dinner.

Paul goes to the antique store and gets in using Megan's keys. He searches the shop. 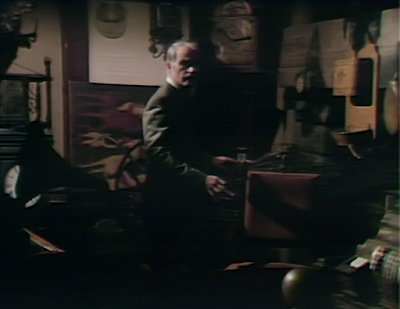 Megan and Philip prepare to leave, and thank Elizabeth.

Paul hears breathing behind the door upstairs in the antique shop. He unlatches the bolt, and unlocks the door with the key. He steps inside and is terrified by what he sees. 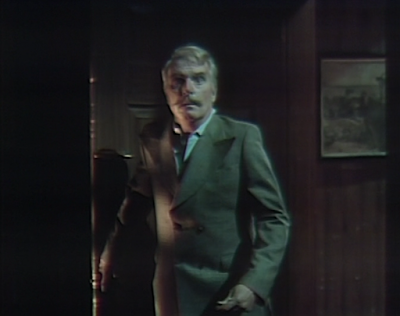 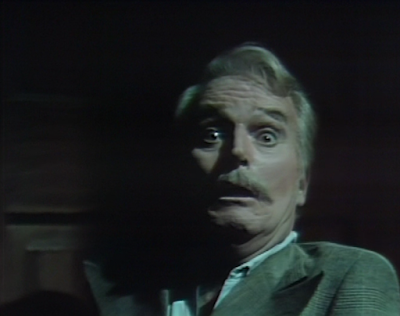 John: So do you think there's a Michael double that got buried (as Julia described seeing), or did they bury and then exhume the one and only? He did seem to be dressed for a special occasion when he came down the stairs...

Christine: I expect that they would follow tradition in Collinsport and bury an empty coffin so that someone could eventually dig it up single handedly within the space of a half hour to determine that the funeral was a sham.

John: When Paul says Carolyn can come with him, and it will be just like old times, what do you think he means? Was he giving her a hint that he meant he was actually going to run out on her again?

Christine: First he would take her money and then run out on her. Unless he meant the old times when she was a baby and he ignored her.

John: As much as I wish we could get a glimpse of what the breathing creature behind the door looks like, I can't imagine they could come up with anything within the show's budget that would live up to expectations. Though maybe it would have been cool if it were Dan Curtis behind the door... :)

Christine: I wonder who got the part of breathing heavily into the microphone. I thought the poor fellow was going to hyperventilate today. Good thing Paul found one of the many guns stored in the drawing room at Collinwood. Let's hope he has it on him and is able to protect himself in tomorrow's episode. 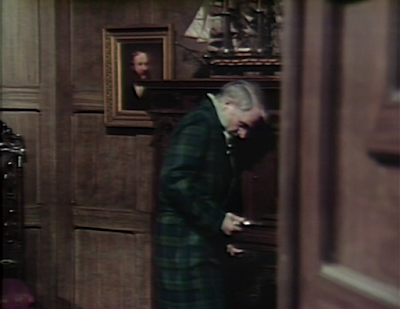 If it weren't for the comment above, I never would have gotten the connection between Paul and Michael, that each one had a fake burial at one time or another.

The Michael actor always reminds me of Shane Bryant, who played Dorian Gray in the Dan Curtis version of that story.