Jeb asks Barnabas what brought his change about. Barnabas says their goal depends on it. Jeb says he knew he'd come around; he just didn't expect it would be so soon. Barnabas suggests that they seal the deal with a drink. He goes into the back room where there's a bottle of sherry and two glasses. He pours them and adds a liquid to one of them. 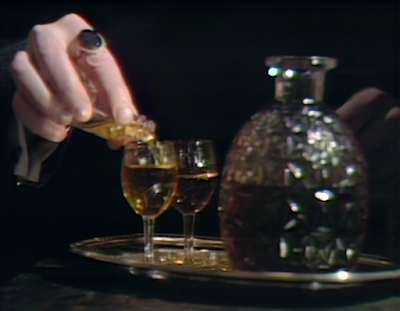 He takes the two glasses back to Jeb and offers a toast to their success. Jeb pauses, and says he wants to propose the toast. He toasts Carolyn, and their future together, and asks Barnabas to do the same. Barnabas smiles as he watches Jeb down his drink. Jeb enjoys it, and asks for another. Barnabas refuses. Jeb asks why. He asks if Barnabas put something in his drink. He accuses Barnabas of coming to kill him. Barnabas says he can't always suspect the motives of others. Jeb asks to review their plan. He tells him to pick up Carolyn at 8pm, and bring her to the antique store to prepare for the wedding. Barnabas asks him if he can leave, and Jeb tells him that he'll see him at 8pm. 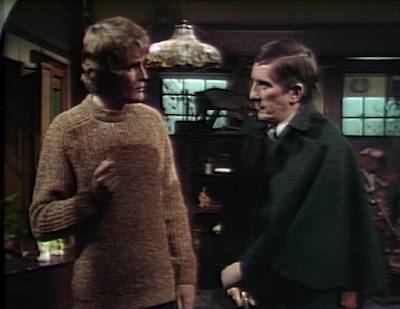 Quentin tells Julia her story is hard to believe. He asks if she really thinks all the children are the same, and she says Jeb Hawkes is not human. She tells Quentin of the Leviathan box. She says it contained an inhuman essence capable of taking human form. Quentin asks what they want. Julia says they're evil, and existed before the time of man. She says the plan is for Jeb to marry Carolyn Stoddard. Quentin says there must be some way of stopping him.

Barnabas returns and tells Julia that he gave Jeb enough poison to kill a dozen men, but it didn't matter. He says he has to pick up Carolyn at 8pm. He says they don't have enough time to get her out of Collinsport. Quentin asks where they can take her. Barnabas asks Julia where Angelique is. She says she promised not to reveal that to any of the Collins' family members. 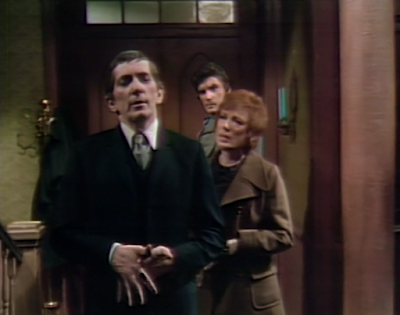 Angelique is on the phone with her husband, explaining that she misses him and loves him. She gets off the phone when the doorbell rings. She's surprised to find Barnabas at the door. She asks what he's doing there. He says he forced Julia to break her promise to Angelique. She asks him to leave her alone, saying that her life has changed and she's happy. He says he needs her help, and her powers. She says she's forsaken her powers, and if she uses them she'll lose her husband. He asks if she can hide Carolyn for a few days or a week. He says he will never ask her another favor. She asks why Carolyn's life is in danger. He asks if she's heard of the Leviathans, and her look indicates that she has. She asks him to explain. 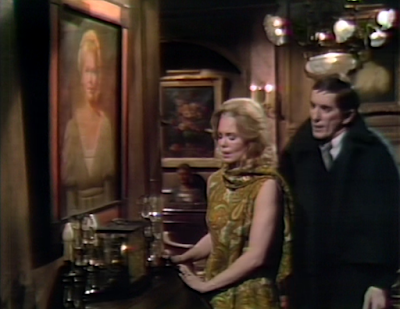 Carolyn is playing the piano when there's a knock at the door. It's Quentin. He tells her that he got his memory back, and wanted to thank her. He explains that his name isn't Grant. They retire to the drawing room, and he tells her that it happens that they are distantly related. He says he is the grandson of a man who used to live in the house, Quentin Collins. She asks why he introduced himself as Grant Douglas before the accident, and he tells her that he's a writer, and he works under many pseudonyms. She tells him that it's a pleasure to meet him. He says he stressed that they're distantly related for a reason. He asks if she's available tonight, and she says she's not. He asks her about tomorrow, and she says she's open. 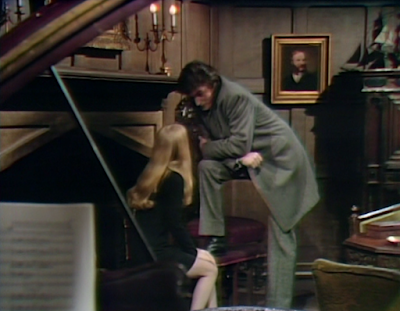 Jeb bursts in and says he let himself in. Carolyn introduces the two men. Quentin says he has a feeling that they met before. Jeb tells Carolyn he came by to confirm their date, and asks her to meet him at the old house at 8pm. Quentin tells her that he doesn't think it's safe, with her father's killer still out. Jeb tells Carolyn that he'll see her at 8pm, and saunters out. 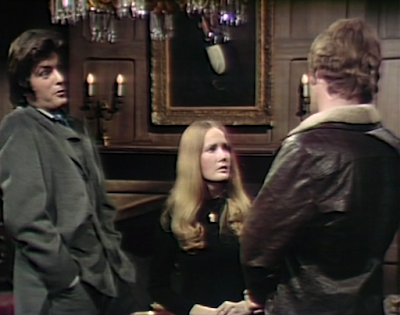 Barnabas explains that he's no longer under the Leviathan's control, and he must now fight them or see everyone at Collinwood destroyed. She says that if she says no, he can ruin her relationship with her husband. He tells her that if she says no, he will leave her in peace. She agrees to let Carolyn stay for a week until her husband returns. Barnabas is grateful. She tells him to remember that she still has all of her powers, and if her happiness is ruined as a result of doing him this favor, she will never forgive him. 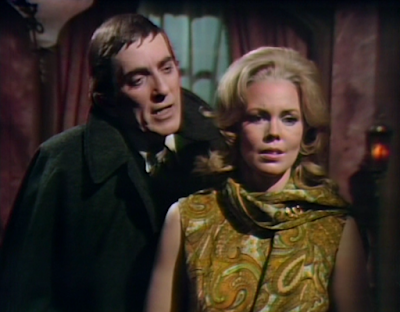 Barnabas, Julia and Quentin review their plan. Julia is going to ask Carolyn to go on a drive with her, promising to have her back before 8pm. Then her car will break down. Quentin asks why he can't just go to the antique shop and take care of Jeb himself. Barnabas sends Julia on her way, and tells Quentin that they must proceed with care. Dealing with Jeb at the antique shop would be suicidal. He says that Jeb is not human, but he has to go by certain physiological rules. He can change between his natural self to Jeb anywhere, but he must be in his room to change from Jeb back to his true form. 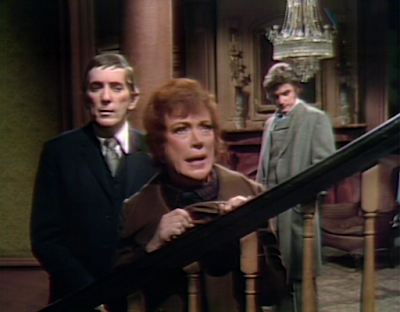 Julia searches Collinwood for Carolyn. Barnabas and Quentin arrive and Julia tells them she's not there. A call comes in for Barnabas. It's Jeb, asking why Barnabas isn't at the old house. Jeb tells him that he's made other plans with Carolyn. 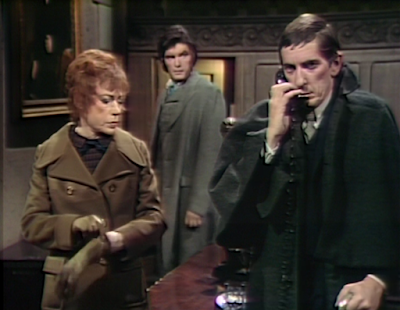 Barnabas reminds him that he can't proceed without his help. Jeb says that's what the book says, and he has decided he doesn't need that. Carolyn comes in to the antique shop, and Jeb tells Barnabas that she's there before hanging up. 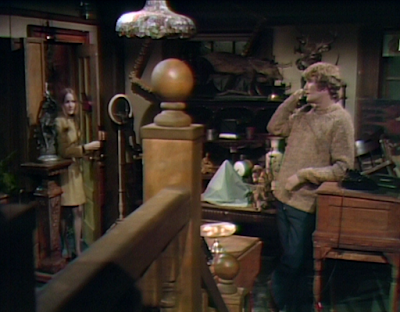 Carolyn asks why Jeb is looking at her strangely. He says he doesn't want her to be uncomfortable. She asks if they're going out, and he says it's a surprise, but they're just waiting for Megan and Philip to return. He tells her that he's going to be very happy with her. He picks up an antique and drops it, breaking it. She says he shouldn't have done it. He hands her an antique and tells her to break it. She says she wishes she could begin to understand him. He tells her to let it drop and she does. It falls to the floor and breaks. Jeb pours them each a drink to celebrate her liberation. She says she doesn't understand, and he says she will soon. She reluctantly drinks from the glass. 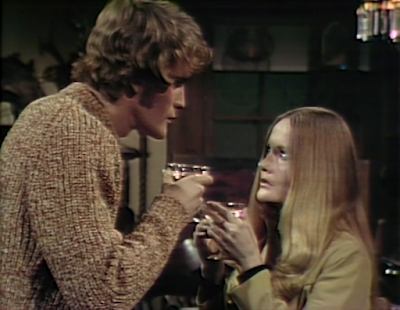 She goes to the window and says there's no sign of Megan and Philip. She says she's anxious to leave, and then she stumbles. She says everything is blurry, and then passes out in his arms. He says that it's the beginning of her new life and takes her upstairs. 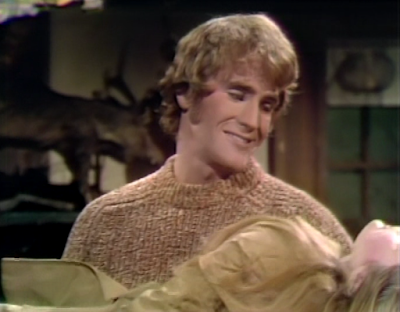 John: So does Barnabas know what he's dealing with or not? If poisoning won't kill Jeb, what makes him think that they'll come up with any way to do away with him. Of course today we find out that the unseen creature can turn into Jeb anywhere, but he can only turn back into his normal unseen creature self when he's plugged into his charging station in the antique shop. I'm not only interested in finding out how Barnabas found this out (was it in the Leviathan Dianetics?). And more importantly, I'd be curious to know if the writers have broken this rule up to this point in the show... because it sure seems like changing between human and unseen form hasn't been so restrictive in the past.

Christine: I'm not sure it's worth the time to invest any thought in whether or not they've held to that rule or not, though I suppose we can imagine Jeb/Michael/Alex sprinting back to his room to transform himself, before respiring heavily around town. I do think it was unwise of Barnabas to dismiss Quentin's idea of preventing him from returning to his room to become the ugly breathing monster.

John: So Angelique remains a happy housewife, but once again, the writers appear to be playing fast and loose, now saying in no uncertain terms that she still has all of her powers, and she's ready to use them if Barnabas ruins her new storybook marriage. I guess we can start that countdown clock today.

Christine: I love how Barnabas asks her to do him a favor just this once and says he won't ask for one again, when he's asked her for quite a few favors in the past, some of which did not end well. I wonder if Barnabas still holds a torch for the woman who made him a man in Martinique, since he continues to find excuses to run back to her to appeal for help.

John: So Quentin is referring to Paul's killer still being out there... so much for the heart attack theory. I guess the only thing more surprising than another distant Collins relative showing up in Collinsport is that he has not yet been invited to move in to the main house yet. I have a hunch that will be resolved before we would even have a chance to start a countdown clock.

Christine: So Carolyn thought it was a super idea to make a date with a wild eyed grabby guy who insisted they would be married on that date, and it didn't raise any red flags for her when he whipped out a bottle of champagne at the shop when they were supposed to be going out. Will her Great Uncle Quentin arrive in time to save her from becoming a heavy breather?