Carolyn comes downstairs and asks her mother if it's good to keep her father sedated all the time. Elizabeth tells her not to worry about him, and leaves to go to a meeting at the Collinsport Historical Society. 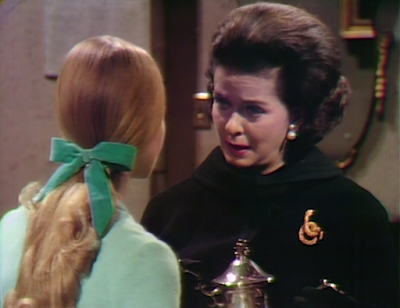 Out of his room, Paul is upstairs in his robe. He laboriously makes his way downstairs and to the front door. Carolyn hears something and finds him. She stops him at the door. He says he has got to get away from Collinwood. She says that no one else is home, and asks him to come into the drawing room with her. 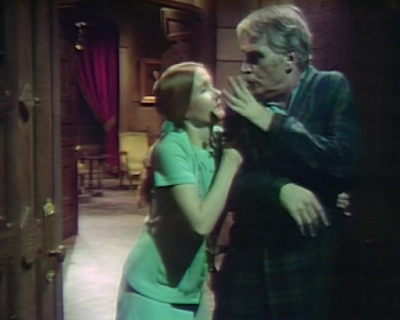 She helps him inside. He says he can't stay. She reminds him that this is where he wanted to be. He says that if he stays, he'll be dead. He says they've gotten into the house and are trying to kill him. She tries to convince him that it's only his imagination. He begs her to let him go. She tells him to wait while she goes upstairs to get his coat. 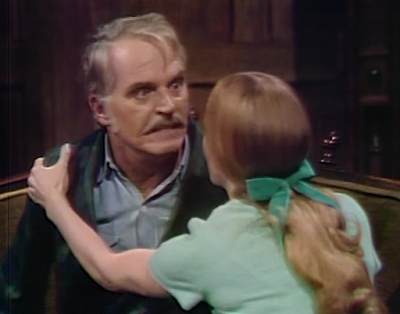 Paul sees Elizabeth and faints. Carolyn returns and asks what happened. Elizabeth asks where she was going to take him. She says that if she hadn't come back for her great grandmother's sugar bowl... and then tells Carolyn to come with her. In the foyer, she tries to convince Carolyn how ill her father is. 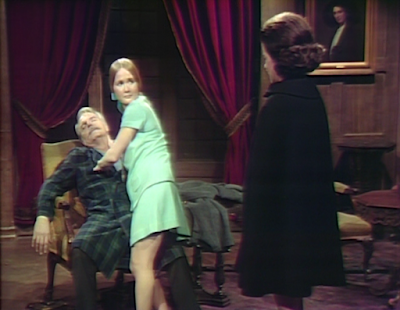 Paul wakes up in his room. Elizabeth comes in with medicine and he refuses to take it. She tells him that he's only hurting Carolyn, and leaves. Paul realizes that it's the medicine making him weak. 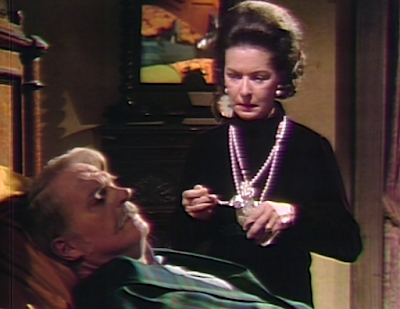 Mrs. Johnson comes in with some milk and cookies. He asks her if there's anything in the milk. She says there's not, and adds that she thinks people would be better off without taking so much medicine. She tells him to have a good rest and leaves him. He takes the milk... 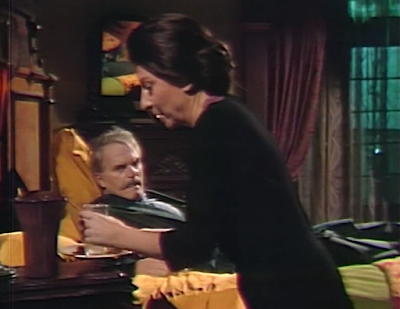 Outside, Mrs. Johnson nods to Elizabeth.

Paul sleeps, next to the empty glass of milk. Elizabeth and Mrs. Johnson enter the room. Mrs. Johnson confirms that was a healthy dose of medicine in the milk. Elizabeth says she couldn't risk his trying to leave again. She sends Mrs. Johnson up to the tower room to prepare it. She adds that Mrs. Johsnson isn't to tell anyone. After Mrs. Johnson leaves, Elizabeth asks the sleeping Paul what made him think she ever wanted him back. 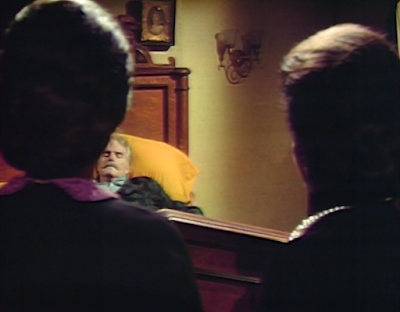 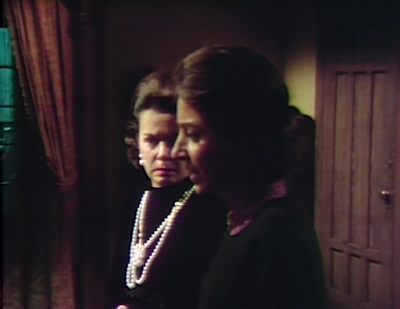 She leaves and he opens his eyes. He realizes that Elizabeth is one of them. He gets out of bed and goes to grab his coat, but collapses. Carolyn comes in to check on him and finds him on the floor. She asks why he got out of bed, and he reiterates that he has to get out before it's too late. He tells her it's worse than he thought. She says she'll protect him, and asks how it's worse than before. He says he'll tell her when they're far from Collinwood. He tells her to check and see if the coast is clear. She steps into the hall. 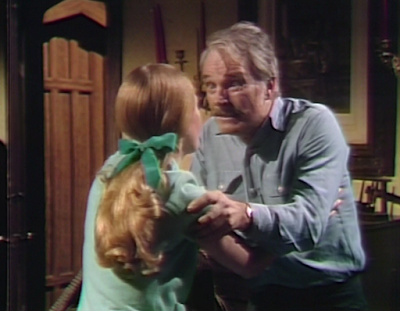 Carolyn returns to her father's room with her mother. They discover that he is not in the room. 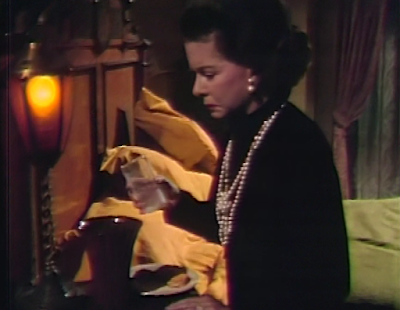 Paul is in the garden, clumsily making his way from the house.

Paul stumbles through the forest. He hears people calling to him. He collapses to the ground. A man walks up to his body. Paul looks up at him and sees Professor Stokes. Stokes asks what's wrong with him. Paul says he needs help to get away. Stokes asks who he is, and he tells him that he's Paul Stoddard. Stokes helps him up, and says he seems to be marked for death. Paul asks him to take him to the police. Stokes says he'll take him back to Collinwood and he'll call the police from there. Paul says they can't go to Collinwood. Stokes helps him to his car. 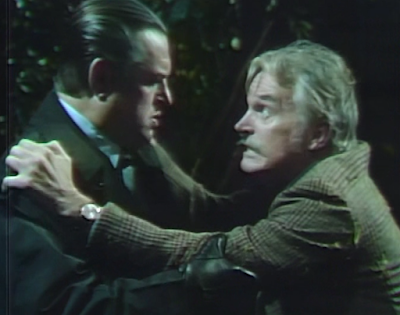 Stokes helps Paul into the police station. He tells the deputy on duty that Paul Stoddard has a story he'd like to tell him. Paul says they have been after him since he came to town. He says it started with hints—phone calls and veiled threats. The officer says Paul seems frightened. Stokes asks who 'they' are. Paul says it's people they would least suspect. He says his wife is one of them. The deputy finds it hard to believe. Paul asks why she would let him back into Collinwood after 20 years unless they wanted her to do so. Paul says because Elizabeth is involved, they won't do anything. The deputy says they'll investigate it fully. He asks to be put in protective custody, and asks if he can call Carolyn to tell her he's all right. Stokes says he'll tells her. 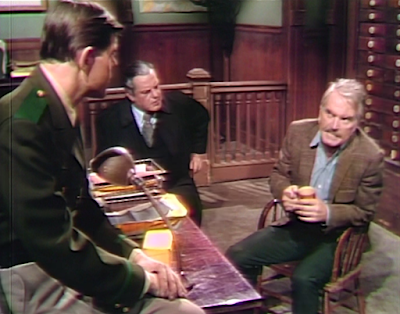 Paul wakes up in a prison cell. He says he feels great. The deputy says there's someone here to see him. He assumes it's Carolyn, but Elizabeth enters. He tries to escape but the deputy grabs him. Elizabeth says the medicine will act as a sedative as Paul screams. 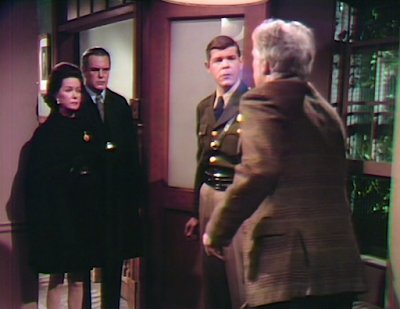 John: Burning question—even if Paul assumed the milk had been drugged, why didn't he partake in Mrs. Johnson's cookies? The odds of those having been tampered with was much lower, I would think. 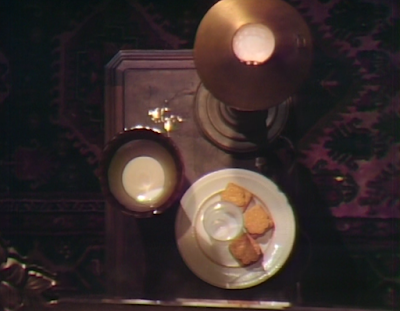 Christine: He shouldn't trust the milk or the cookies, but perhaps he left them because he prefers milk with his cookies. Great to see Mrs. Johnson, who last appeared in February. For a moment, I was afraid she had become part of the Leviathan clan, too.

John: I was sure Paul was going to make it as far as the Leviathan's altar... and from there it would have been anyone's guess who else might have appeared in the episode.

Christine: I was hoping that Stokes would call Julia, and she'd help connect the dots for him, but it was much scarier to have him show up at the station with Elizabeth and her menacing spoonful of medicine. 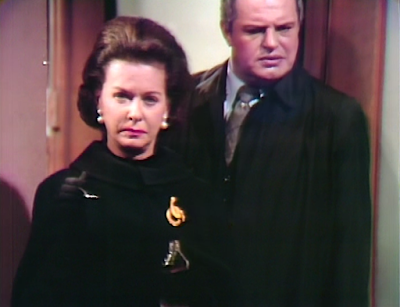 John: Just when Paul thought he had outsmarted the Leviathans, Elizabeth gets her hands back on him. Of course the sad thing for Paul is that the people helping Elizabeth don't have to be Leviathans. They just assume he's crazy. I am curious why Carolyn wasn't there. Shouldn't Stokes have brought her?