David asks Elizabeth how Paul is. She says he is almost asleep. David says that Barnabas says they are not to move him, and remind her that Julia is her responsibility. David asks what she's going to do about her, and Elizabeth says she will kill her. 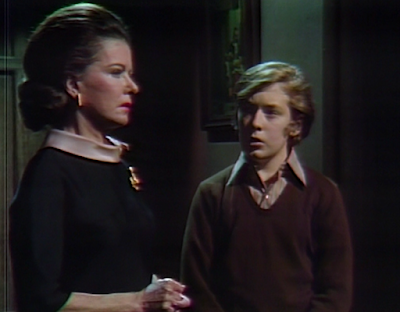 Julia scans the papers for any horrible animal murders after the full moon. If Quentin killed anyone last night, no one knows it yet. She calls Olivia and asks her about Grant. She asks her to check on him and call her back.

Outside the drawing room, Elizabeth pulls out a gun.

Olivia calls Julia back and tells her that Grant isn't in his room. Julia is sure he turned into a werewolf. Elizabeth walks in and asks her what's wrong. She asks her if she knew Paul had Stokes take him to the police last night. Julia says she wishes she could help him. Elizabeth says he's terrified of Julia. Julia says she thinks it stems from the antique shop. Elizabeth reaches for her gun and points it at Julia as she throws some papers into the fire. She puts it away and leaves the room. 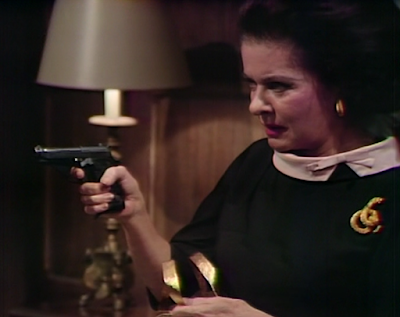 David confronts her in the foyer. Elizabeth says she couldn't go through with it. He tells her the book can give her the strength she needs. 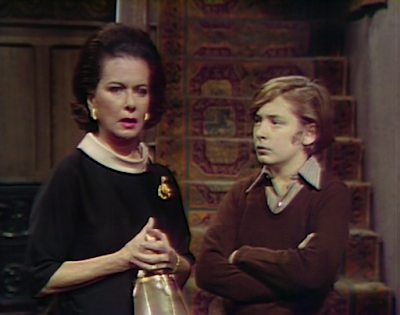 Julia pours herself a drink when Chris bursts in. He says they're going to pay a visit to Tate. Julia says he is not the answer, and asks him to return to Windcliff. She says to give her time. She tells him that Grant disappeared last night. Chris brings up how the ghost of Jenny told him to find Quentin. Julia says that perhaps when Grant remembers who he is, he can help. Julia says if she only knew where he was... 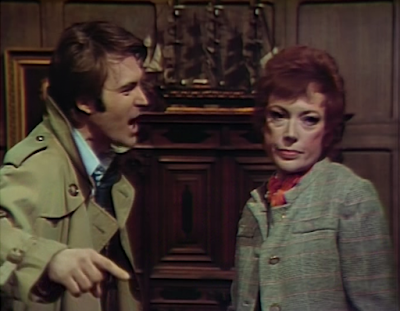 Grant returns to Olivia's and collapses in a chair. 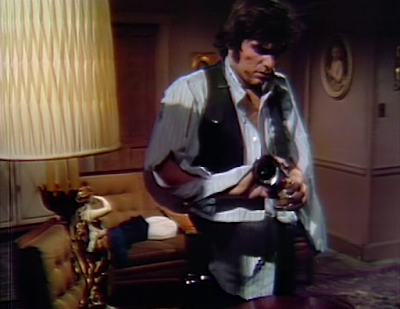 David meditates over the Leviathan book. He reads to it with Elizabeth beside him. He says she knew that if she killed Julia, her spirit would return to combat them. The spirit of a dead enemy is stronger than the enemy itself. He tells her that everything they need is in the book. 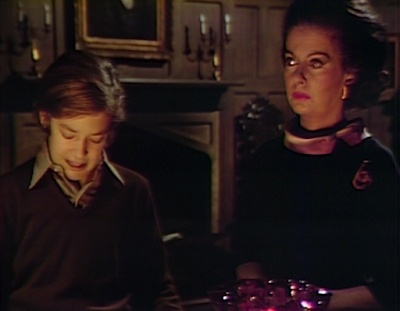 Grant pours himself a drink. Julia walks in looking for Olivia and she is shocked to see him. She asks where he was last night. He asks if he's supposed to check in with her every night. She says whatever happened wasn't his fault. He says it was. He says he hit a guy in Portland for staring at the girl he was with. He says he had gone to Portland to look up his history. He says he found letters to Frederick Thorne in storage asking why he abandoned her so quickly. Thorne's driver's license says he was born in 1942. He says there was also a photo of Olivia cut out of a newspaper. He asks Julia why, and she says she doesn't know. 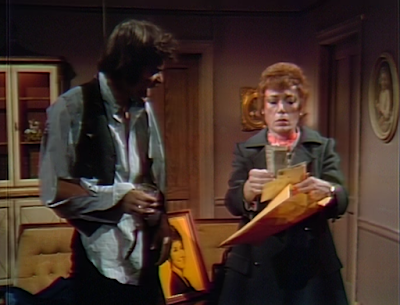 Julia tells Chris that Grant was in Portland last night, and does not appear to be a werewolf.

Chris comes to see Grant, and asks him to help him. Chris asks Grant to come with him to see the old painter Charles Delaware Tate. He says he knew Quentin. Grant reiterates that he's not Quentin. He agrees to go with him, and says he'll even say he's Quentin if it helps Grant get in to meet him. 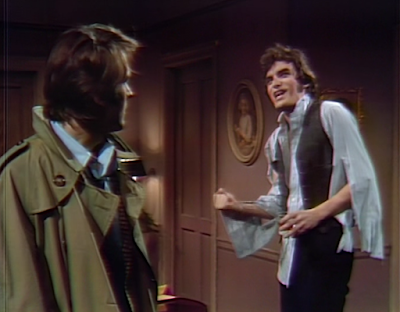 Elizabeth tells David that she has failed Barnabas. He says he'll talk to Barnabas to confirm he's not angry with her. 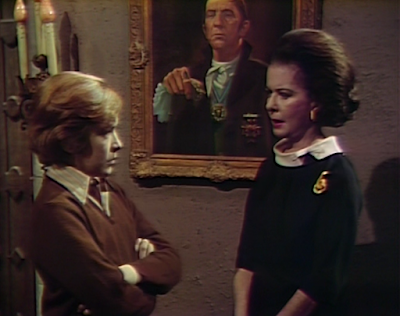 Tate tells Grant and Chris to go away. Grant says he's Quentin Collins, and the door opens. The two go inside. Tate tells them not to come any closer. He looks at Grant and calls him a liar. He says he's a young man, not Quentin Collins. Grant says he too looks young for an old man. Tate says there's a way to stay young. He then calls Grant Quentin, and says it's due to the genius of Tate. He says Quentin took Amanda Harris from him. He then starts his stupid laughing. 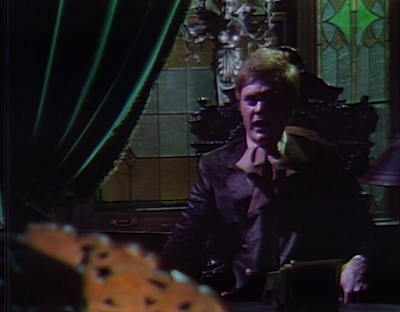 Quentin throws a vase of flowers at him, and the body falls down. His head rolls along the floor. Grant runs out, and Chris picks up the head of Charles Delaware Tate. 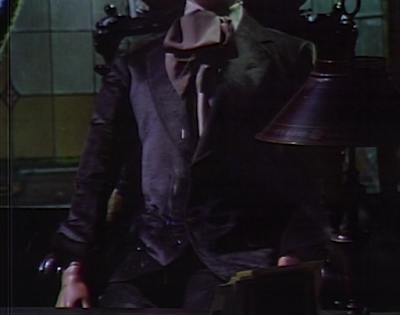 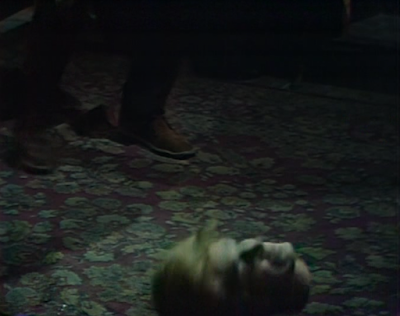 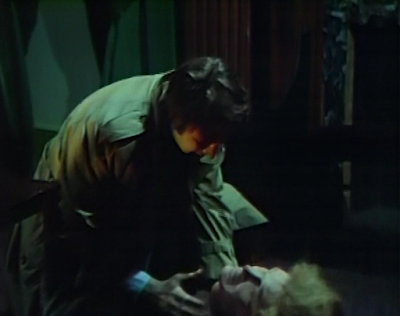 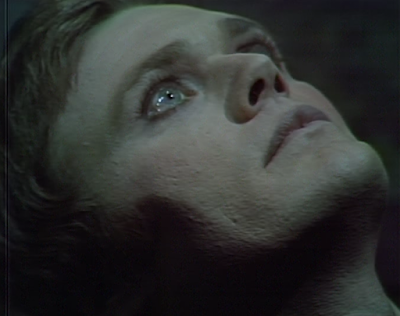 John: Wouldn't it be easier for Elizabeth just to kick Julia out of Collinwood? Have they forgotten that she's not family, and that she originally came to live there under false pretenses?

Christine: I was thinking the same thing. It seems she may have been staying on to offer her medical services free of charge to the family, but since most of the family is under Leviathan control, and Paul Stoddard has refused treatment from her, they have no need to keep her around. I've noticed she's been making frequent visits to the brandy bottle lately, probably due to the lack of support from her former pal, Barnabas, and concern over the change he has undergone. 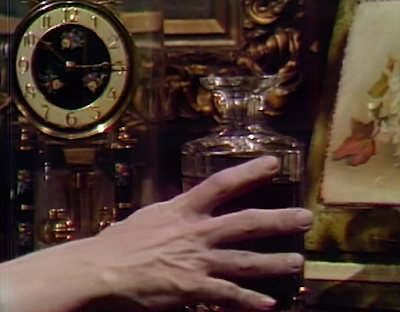 John: Do you think they were being clever when they had Grant say that he had had enough Quentin for ten lifetimes? Technically, it would have been fewer than that.

Christine: It wouldn't be the first time we heard clever dialogue. So, Grant was not out werewolfing around, but instead was throwing down at the Hi Hat Lounge in Portland because some dude was making googly eyes at the girl he picked up for the night. That doesn't really explain why he tore up the room he's staying in, but I guess that's just what he likes to do after an evening of binge drinking. Yeah, he's definitely Quentin.

John: The Tate dummy was almost as good an actor as Roger Davis. I did like that when Chris examined the head, it was Tate and not a dummy. Can't wait to see where crazy Tate goes from here!

Christine: Love the rolling head! I thought it was funny that David told Liz he was going to check with Barnabas to make sure he wasn't angry with her for not killing Julia, after he was unable to kill her himself just a few days ago! According to the Leviathan book, real Leviathans can't kill their enemies, but if a human kills while under Leviathan control at their direction, wouldn't that mean the Leviathans are essentially killing their enemies? And why should they care if spirits return to war against them? Does it mean the Leviathans are afraid of ghosts?