Sabrina goes to Collinwood, and realizes that is where it all began. She goes into the drawing room and goes through the motions of starting a seance. 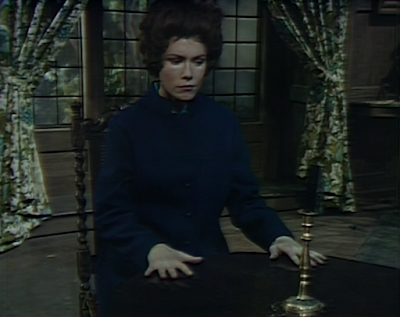 Coming down the stairs, Roger and Elizabeth wonder where Quentin, Maggie and Julia are. Roger tells her that Daniel will always resent his new mother. They go into the drawing room and find Sabrina, who tells them it's time for the seance to begin. Roger asks her what she's talking about. Sabrina asks where Cyrus is, and Roger says there will be no seance in the house tonight. 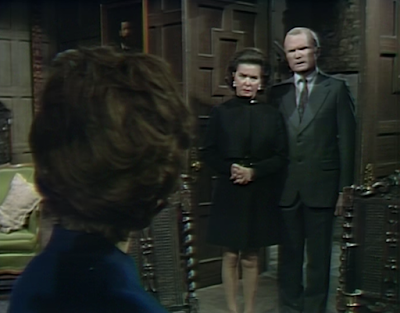 Sabrina says Cyrus and Angelique planned it. Roger asks Elizabeth what's happened to Sabrina. He says she thinks it's that night from six months ago when they gathered in that room. She says they have to do something, and Roger goes to call Cyrus. 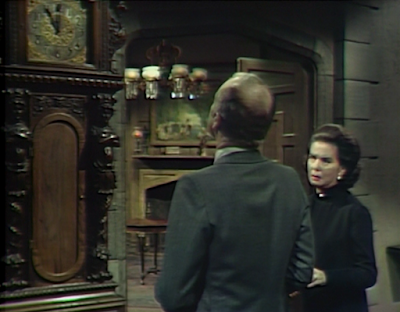 Sabrina says she wants to go back to the seance, and Cyrus tells her that was six months ago. She says Mrs. Collins called her at the lab and asked her to come, Cyrus offers to call a doctor, and Elizabeth tells her to remain calm. Roger asks Cyrus what happened to her, and he explains that she was attacked yesterday. Roger says he can't live through that seance again. 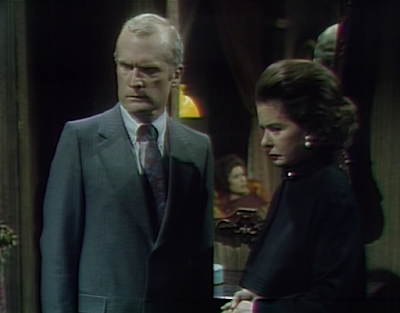 Sabrina asks Elizabeth if Cyrus is trying to convince Roger to go through with the seance. Elizabeth tells her the doctor will be there soon.

Bruno asks why Cyrus is asking him to come to Collinwood. He tells him that Sabrina is in a state of shock. Bruno asks him what he did, and what he's covering up. Cyrus explains that she was attacked in her room, and the shock has made her go back to the night of the seance. Cyrus says the doctors say if she goes through the seance, she may be alright again. Bruno says it's a tasteless idea. 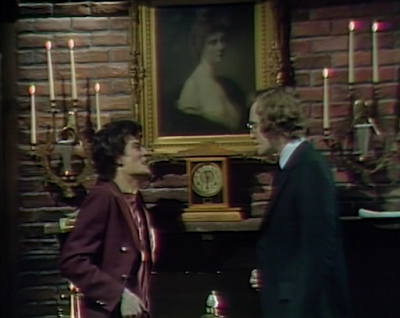 He goes on to lament the loss of Angelique, and sits down at the piano and starts playing. He says she knew Quentin hated her interest in the occult, but she could never give it up. He says they could never live through that night again because Angelique is not with them. Cyrus tells him not to relive it again. Bruno says it was the last time her hand touched his, before she died. Or did she? He says he can't stop wondering. 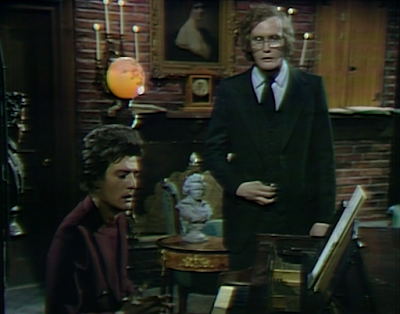 Cyrus asks if he'll come to the house, and Bruno agrees to. He thinks they should ask Alexis to sit in for Angelique. If they are one and the same, she would be going to the seance where she died. Cyrus says they're doing it for Sabrina's sake, not Bruno's curiosity. Bruno says Cyrus is doing it to cover up his own guilt. 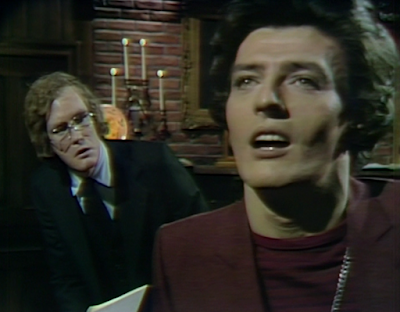 Roger speaks to Angelique's portrait, saying that no one will let them forget that night. He doesn't hear Alexis enter the room. He says he can't go through it again. He turns and sees Alexis, and calls her Angelique, and says she's come back. Alexis says she doesn't know who he is, but he must listen to her.

Quentin tells Elizabeth that he forbids holding another seance in the house. She tells him Maggie will never know, and he explains that they need to talk about Maggie. 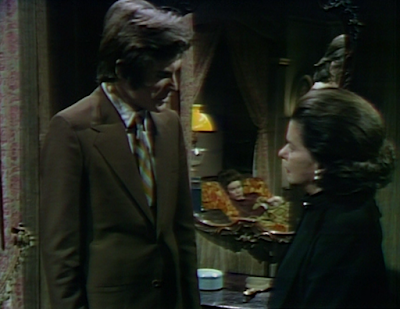 Roger realizes that Alexis is Angelique's twin sister. She tells him that she is not a ghost, and he'll soon find that she is quite different from her sister. 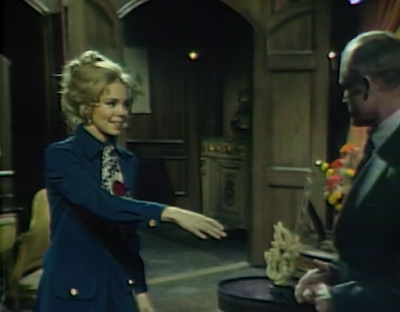 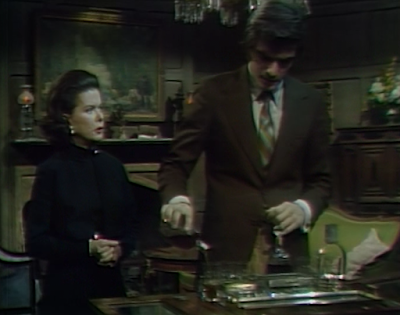 Roger comes in and introduces Alexis to Elizabeth. Sabrina comes in and asks if everyone is ready for the seance, calling Alexis Angelique. Quentin goes into the foyer, and Alexis follows, asking what she means. Bruno and Cyrus arrive, and Quentin tells them they can take their black magic to another house. Cyrus asks Quentin to let them go through with the seance. Bruno asks if Alexis was going to sit in in her sister's place, to see first hand how her sister died. 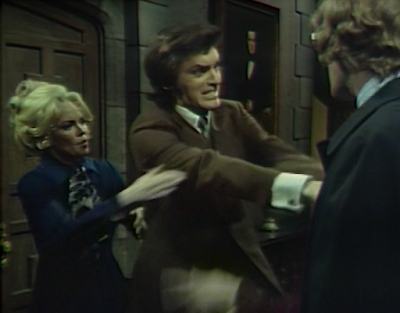 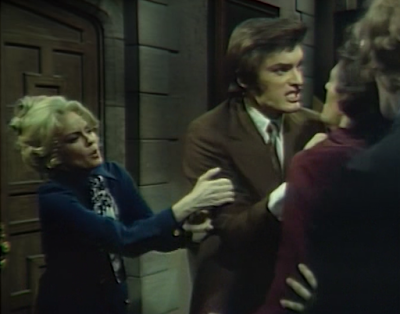 Sabrina directs Roger and Elizabeth to sit down. Roger refuses, and Elizabeth asks if he's frightened. He brings another chair to the table. 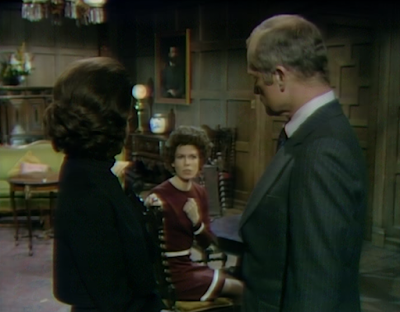 Alexis says she was told Angelique died of a stroke. Bruno confirms that she did—at the seance. Alexis says she's willing to go through with it, if Quentin doesn't forbid it. He says he won't forbid it, but he also won't participate. He tells Bruno to leave once it's over. 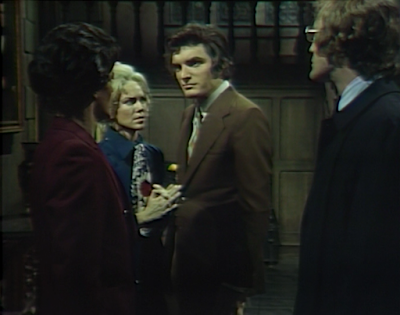 They all go into the drawing room and sit around the table. Bruno points out that there was a storm that night, too. Roger asks Alexis if she's sure she wants to go through with it, and she confirms that she does. They sit around the table, touching hands. Cyrus calls the spirits of the dead. He calls the spirit who came to them before to help save one of them. Sabrina begins to moan, and Cyrus asks who she is. She asks him to let her go. She points at Alexis and says she's dying. Alexis passes out as Sabrina screams murder. 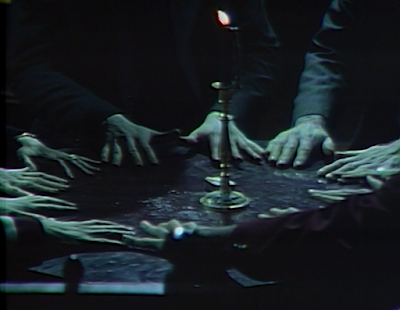 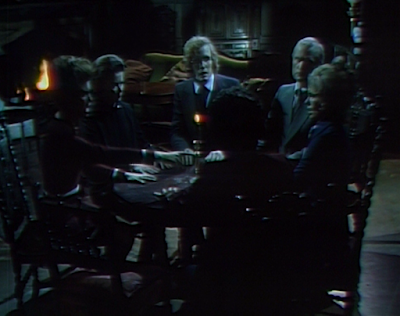 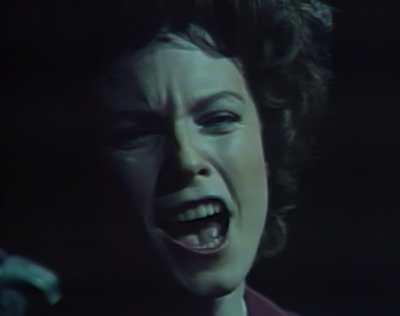 John: It was funny that as soon as Roger and Elizabeth re-appear, they explain the absence of Maggie and Julia. I also think it's funny that they bring up Barnabas in the open every day since he was chained up. The only thing they haven't done is advertised that they were off filming House of Dark Shadows!

Christine: They must have been afraid the fans would stop watching if they thought he was gone forever. I wonder if Sabrina is a frequent guest at Collinwood. Roger and Elizabeth seem to have a familiarity with her that has not been very well established.

John: If you were Cyrus, wouldn't you find it risky to enter into a seance with your fiancee while you're harboring your own dark secret—one that involves attacking her and stealing her wedding ring?

Christine: I would think so, especially when her odd behavior and determination to repeat the séance that resulted in Angelique's death was instigated by his attack.

John: I don't know if I'm more surprised that Quentin chose to sit out the seance, or that he allowed it to happen in the house. And who could have predicted that repeating a seance in which someone died—with the dead person's twin sister sitting in—might turn out badly?

Christine: Now we have an official séance for the tracker. I suspect Alexis took a dive to detract from any further information coming from whoever is possessing Sabrina. I was expecting a little more from this episode, and it made me wish I had a pop-up bar available like Quentin, but perhaps the bombshells I was hoping for will begin to explode on Monday.

Second Down for the Count:
Barnabas was chained in his coffin 8 episodes ago.

Episode 990: Cyrus conducts; Roger, Elizabeth, Bruno, Sabrina and Alexis participate; an unknown entity speaks through Sabrina, claiming that Alexis is dying, who then passes out; held in the parallel drawing room in 1970
Posted by John Scoleri at 6:00 AM