Maggie runs downstairs and tells Barnabas that the children are missing. She shows him the phone she found in David's room, and tells him that it means they've gone to Collinwood to be with Quentin. Barnabas suggests that Quentin communicates with them through the phone. He tells her to wait, and he goes downstairs. 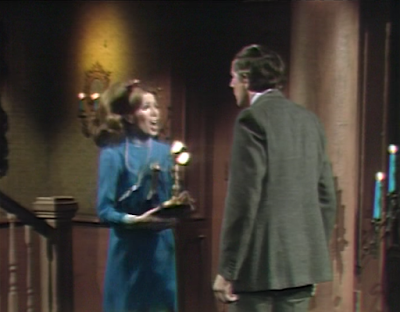 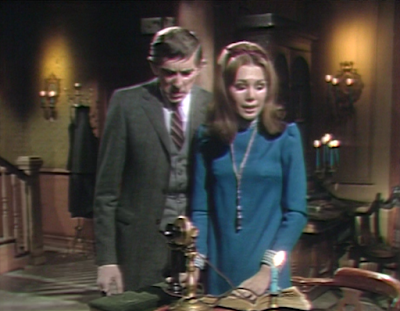 Amy looks for David in the storage room. She finds Quentin, and asks if he told David to run away from her. He nods. She asks what he wants from them. She asks where David is, and then says she doesn't want to play the game any more. The music begins to play, and she agrees to do whatever he wants. 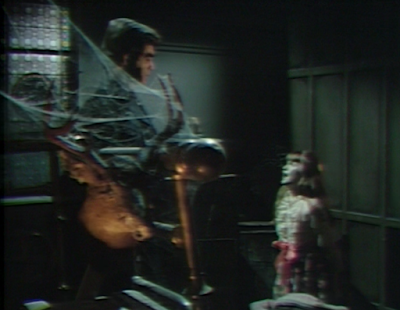 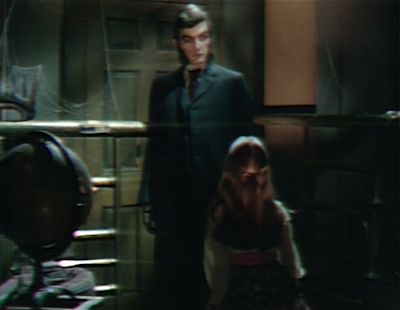 Willie tells Barnabas that he doesn't want to go to the house. Barnabas says their lives are in danger, and when Maggie asks him to go, Willie agrees. 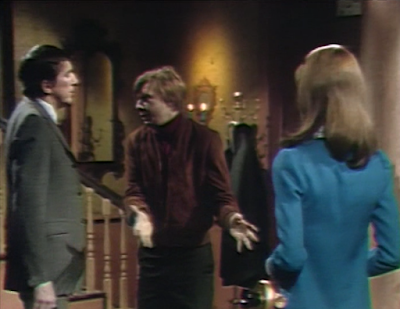 Amy carries a dress downstairs, followed by Quentin. He motions for her to be quiet. 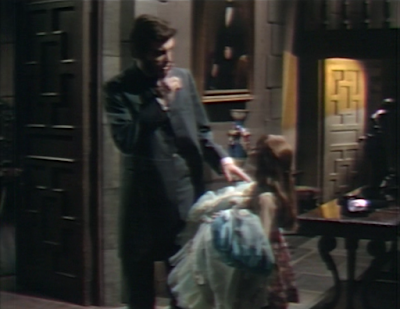 Outside the front door, Barnabas says that he'll search the West Wing, and asks Willie to search the rest of the house.

Quentin leaves Amy, and she asks him not to leave her.

Barnabas hears Amy inside, and calls to her. The front doors swing open on their own. Willie reluctantly follows Barnabas in. Amy is hiding behind the curtains in the drawing room. Barnabas and Willie see a dress spread out on the floor, but no one is present in the room. Willie says he feels like someone is watching him. He picks up the dress, which Barnabas identifies as Victorian. He says Amy must have dropped it, and Willie suggests the ghost might have. 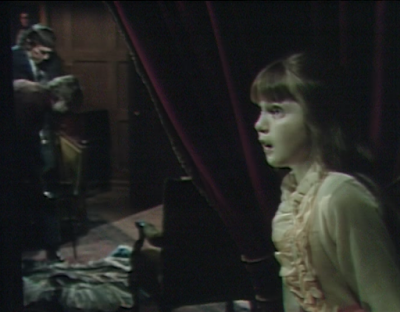 They leave the drawing room and music begins to play. Barnabas wonders where it's coming from, and why he wants them to hear it. He says he wants to draw them away from something, and Willie says the dress. The go back into the drawing room, and see no one. The music stops and they start upstairs. The lights come on and frighten Willie. Barnabas says that he's laughing at them. 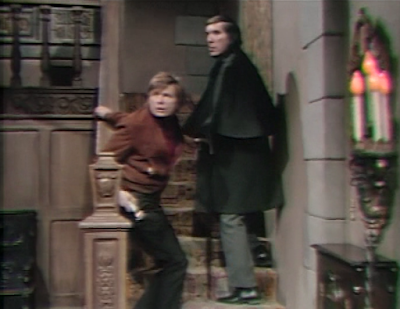 Amy comes out from behind the curtain, followed by Quentin. He leans down and whispers something to her. She asks why he wants her to get her. She asks if he'll be nice if she brings her to him. He nods, and she agrees to go get her, leaving the house to get Maggie. 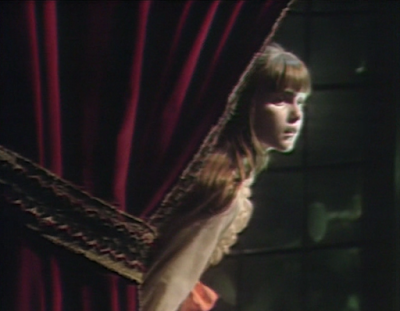 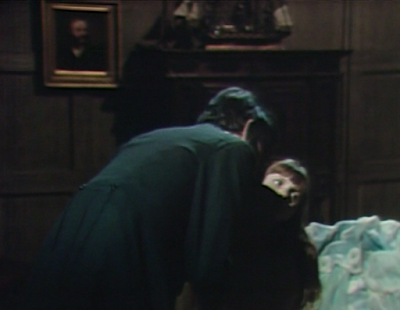 Maggie paces at the old house. She picks up the phone and says the children couldn't hear anything on it. She sees Amy outside and calls to her. She runs outside to get her. 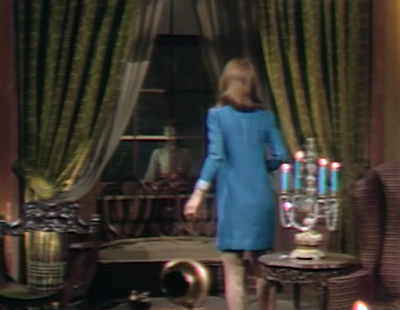 Barnabas and Willie search the storage room in the West Wing. Barnabas tells Willie to look for a secret passage. They move furniture around, and expose the panel with the access to Quentin's room, but don't test it. Quentin appears in time to watch them leave the storage room.

Maggie follows Amy back to the main house, and yells at her not to go inside. Amy goes into the drawing room. Maggie arrives at the front door and enters the house. She hears Amy humming. She opens the door to the drawing room where Amy is sitting. Amy explains that she and David live in the house, and are very happy. Maggie tells Amy to come with her, and grabs her arm. She tells her that Quentin means to harm them.

Quentin makes his way down the stairs. 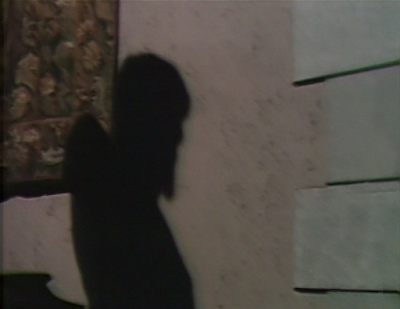 Maggie says there's someone else in the room, and asks where they are. She tells her they're by the fireplace. Maggie turns to take her away when Quentin appears in the doorway, and closes the door behind him. Maggie screams. 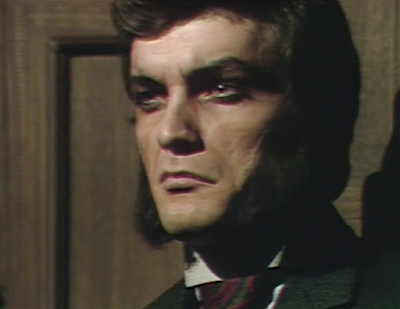 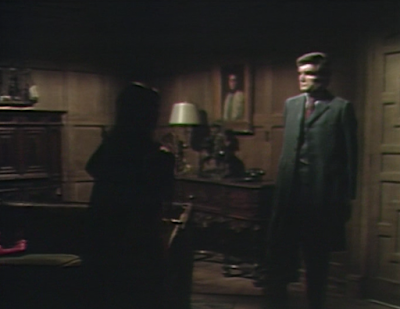 Barnabas and Willie hear the scream and run downstairs. The find Amy in the drawing room, coloring. Willie asks her if she screamed, and Amy says that was Maggie. Willie asks where she is, and Barnabas tells him to take Amy away. He does, leaving Barnabas alone in the house. Barnabas says he will take Maggie, Amy and David from him. He hears Quentin's laughter, and he goes back upstairs. 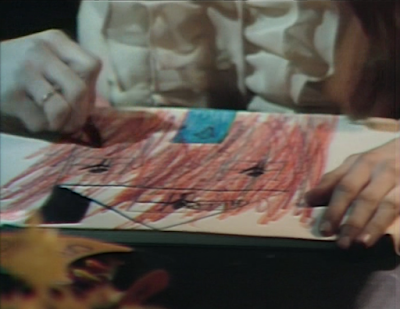 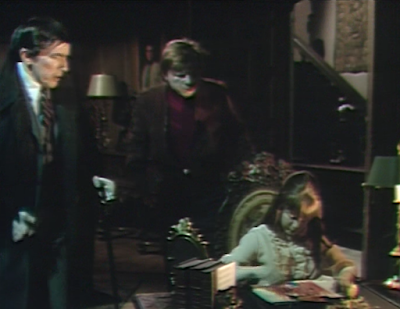 Back at the old house, Willie tells Amy that Maggie wasn't at the main house. He calls to Maggie. Amy says Maggie's not anywhere anymore, and soon he'll see what she means. 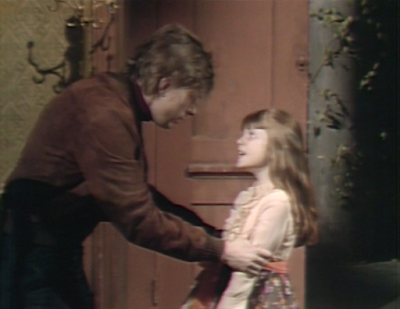 Barnabas stands at the top of the stairs wondering where in the house he hasn't explored. He goes back downstairs, and before he leaves, he says that in one room, he will come to him. He goes back into the drawing room and finds Maggie in the Victorian dress. He calls her Maggie and she asks what he called her, and who he is. He tells her she is Maggie Evans, and she must come with him. She tries to say her name, and when she can't come up with it, she screams and collapses. 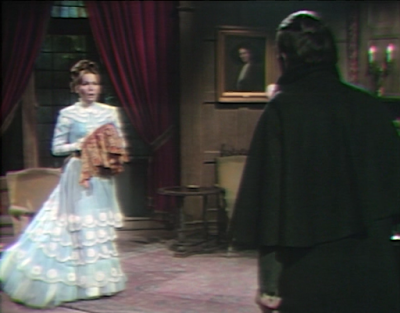 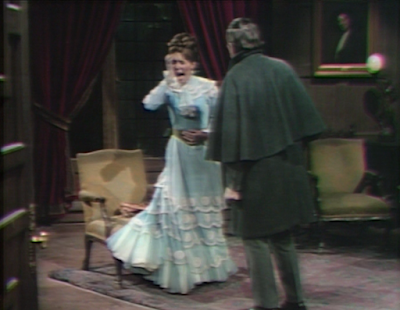 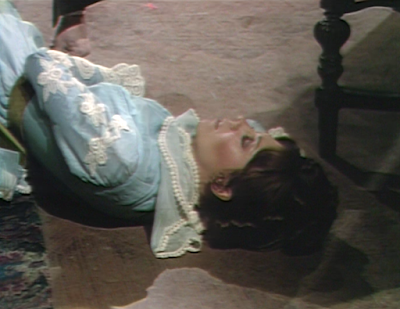 John: Did they swap out the ghost-phone for a different model? It looks different to me.

Christine: It looked different to me too. In reviewing past episodes, it appears to be the same phone, though it looks to me like it was spray painted gold. Either that or the lighting at the Old House gave it a different appearance.


John: Willie! Long time, no see. And back just in time to witness Maggie get caught up in a heap of time displacement trouble again.

Christine: I am impressed that Maggie could attire herself in Victorian fashion and create a remarkable updo in no time at all, unless that was Quentin's doing.

John: Barnabas should have tried calling Maggie Josette. He might have gotten lucky! So are we to understand that she's been possessed by Beth? I hope so, if only in that it will mean we should finally get filled in on her backstory.

Christine: That would be nice since it's really hard to determine Beth's motivation. At times she seems to be working against Quentin, and other times is aiding and abetting. It's about time we found out more about the gruesome twosome.

Oh goodie! I agree Barnabas might have gotten lucky. I remember this episode well. At first I thought the Victorian dress Maggie suddenly was wearing didn't add up to anything Josette-essential until I took a good look at the colours. I thought the dark green sash was horribly out of place, and then? I realized all three of those colours are representative of Josette's bedroom at The Old House. The green sash represented her drapes. Wild, eh?

That's a nice observation. I hadn't noticed that.

Oh goodie. Thanks for noticing me.