Daniel sits up in bed screaming for his mother. Alexis comes in and asks him what's the matter. He asks her to promise not to lie to him. She agrees. He asks her if she really is his mother, and begs her to confirm it. She looks over and sees Quentin standing in the doorway. Alexis tells Quentin that Daniel had a nightmare, but he's alright now. 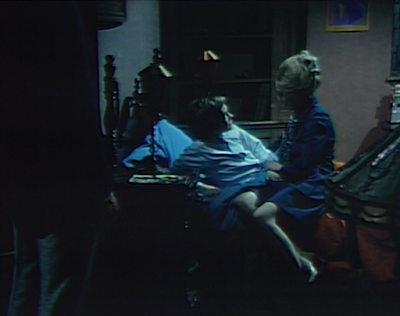 She assures Daniel that she's his aunt, and tucks him back into bed while humming. Daniel gives her a strange look, and explains that she prepared his pillow just the way his mother used to do it. She explains that pillow-plumping is universal knowledge. He adds that the song is the same, and she explains that they learned that from their mother. Quentin seems troubled by the behavior. He and Alexis leave the room together. 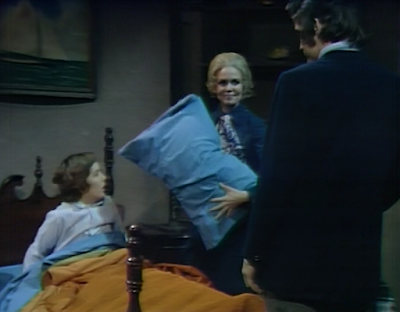 Hannah Stokes tells Bruno that he must beware—alien forces are against him. She asks if he wants to know if it's the spirit if her niece, Angelique. Bruno tells her that the woman in Collinwood is really Angelique. She tells him that she can't help him tonight, but she'll be back tomorrow with more information. She says that she can tell her nieces apart, and will tell him tomorrow who is living in Collinwood. 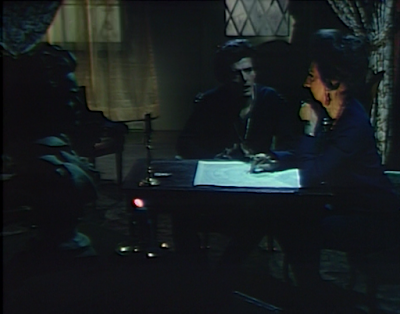 Angelique tells Quentin that it breaks her heart the way Daniel believes she's his mother. Quentin doesn't seem so sure that she's not. She asks him what's wrong, and then realizes that he's seeing Angelique in her as she prunes flowers. She once again attributes the similarity to training from their mother. She asks him what Angelique would do with the clippings, and he says he doesn't know, until she suggests throwing them in the fire, which reminds him that's exactly what she did. 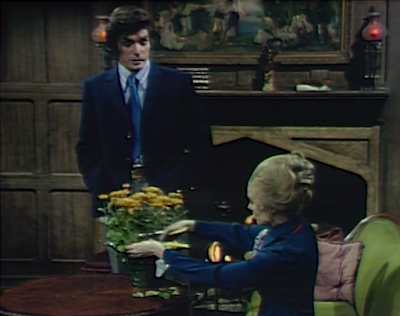 The woman says she will discover whether Alexis is Alexis, and leaves Bruno's cottage. He sits down at the piano and plays. 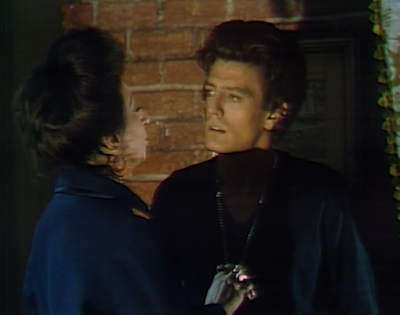 Quentin checks in on Daniel, who is still lying awake in bed. He says he can't sleep. He says if she hadn't seen Quentin, it would all be different. He says she was about to answer that she was his mother when Quentin came in. 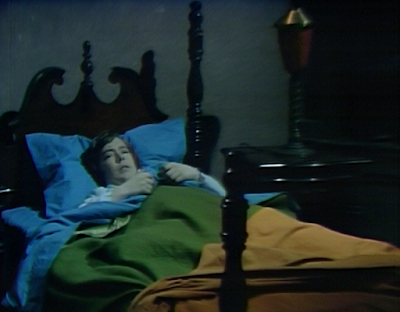 Hannah asks Daniel why he never comes to see his great aunt anymore. He asks if she came to see Alexis. She pulls a deck of tarot cards out of her pocket, and Daniel grabs them. Alexis comes downstairs, and tells Daniel to put the cards back. She asks Daniel to hang up Hannah's coat, and he does, grabbing the tarot cards in the process and going upstairs with them. 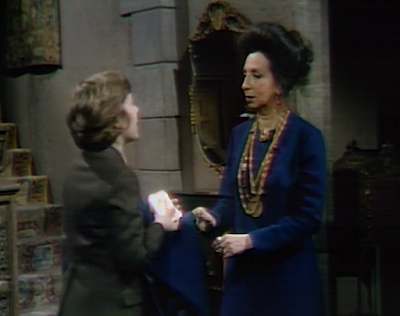 Hannah tells Alexis that she looks well, considering what she's been through. Clutching a handkerchief, Alexis says that her sister's death did come as a shock. Hannah brings up the seance, saying Bruno told her about it, and that the word murder was spoken. Alexis drops the handkerchief, tells her she doesn't want to discuss it. Hannah grabs the handkerchief and hides it up her sleeve. 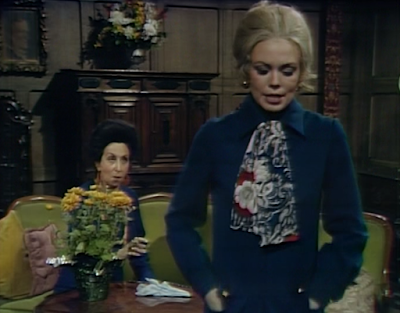 Hannah says she can come back another time. She passes Quentin on the way out, and assures them that she can find her way out of the house. Alexis tells Quentin that Bruno sent her to raise the question of Angelique's murder. Quentin says he'll do what he can to clear things up as soon as possible. 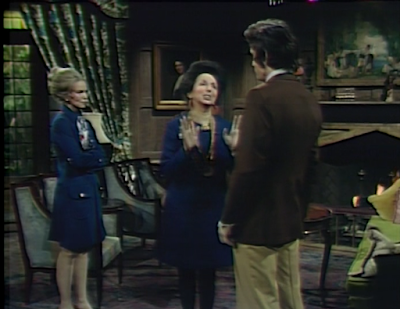 Amy watches Daniel dealing out Hannah's tarot cards. Hannah comes in, not surprised to see he has them. She is startled by the cards he dealt, but tells him it's nothing when she sweeps them all up. She takes them and leaves, and David tells Amy that the card that upset her was the tower of destruction. 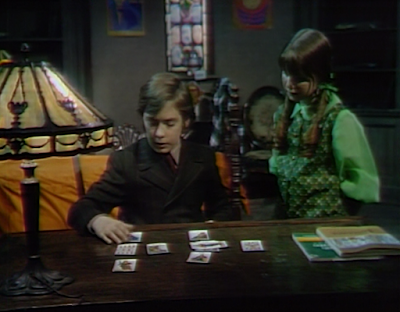 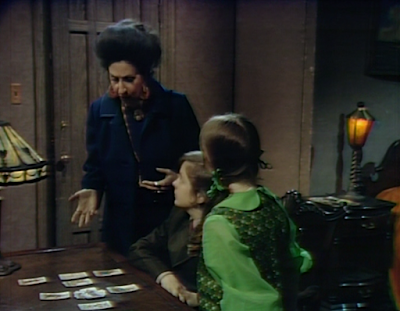 Hannah lays out Alexis' handkerchief, sprinkles some dry herbs and bone dust on it. She says that if Alexis is Angelique, and one of the living dead, the handkerchief will turn blood red when she finishes her incantation. She does the incantation, and the handkerchief catches fire. Bruno asks her what it means. She says a spirit is opposed to them finding out. 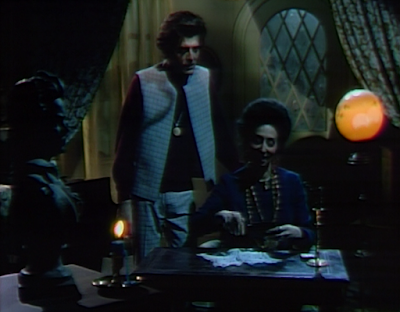 Hannah says she must have silence, and begins to deal out her tarot cards. Quentin walks in just in time to hear Hannah say that Angelique is at Collinwood. He leaves, not hearing her explain to Bruno that while Angelique is there, she doesn't know what form she's in. All that they know is that Angelique IS here. 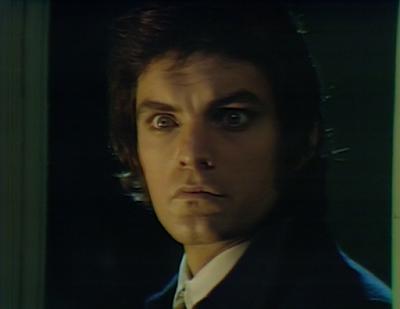 Quentin returns to Collinwood, believing that Alexis is Angelique. He then dispels Hannah's words as madness. He reiterates to himself that Angelique is dead, and then wonders if that's true.

Amy is on the phone with Chris when Quentin comes in. Quentin picks up the phone and tells Chris that everything will be worked out soon. He gets off the phone, and asks Amy what's bothering her. Amy says it's Alexis, pointing out that Maggie left because of her. Quentin tells her he wants to do one thing, and then they can decide if she's going to go live with her brother. 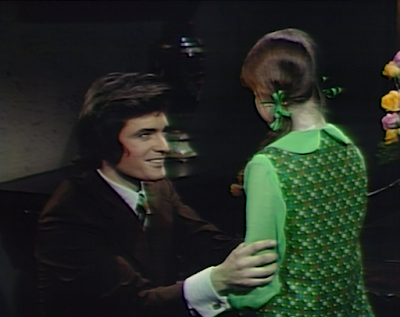 In the East Wing, Quentin hears Angelique's song playing, and then hears a scream. He rushes into Alexis' room and they watch as the piano plays with no one sitting at it. Alexis says that Angelique's spirit is in the room with them. 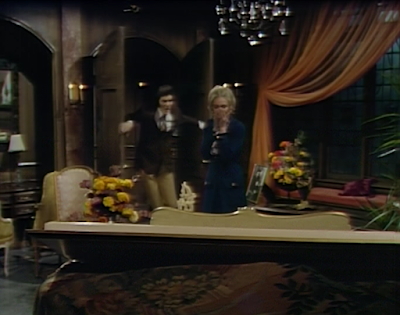 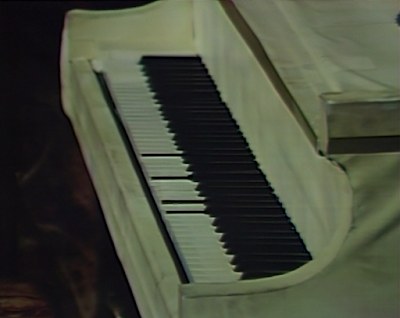 John: There's a new Stokes in town! At first I assumed that she was a gypsy or a witch, so I was quite surprised to find that she was Alexis' and Angelique's aunt! It's too early to tell, but it sure seems like she might not be as talented as she pretends to be. She didn't seem to be prepared for the handkerchief to burn. 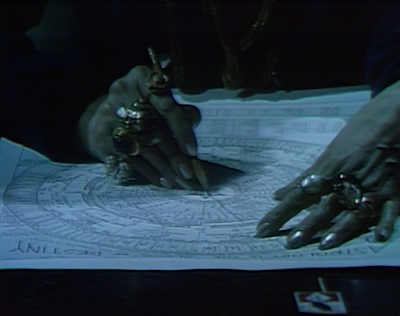 Christine: Hannah Stokes is a real pro! Look how many rings she's got on, after all! She even merited her own new music cues upon meeting Alexis at Collinwood. I thought she was the same caliber as Janet Findley, though hopefully will be around a little longer. Tarot enthusiasts will not be surprised to see the Tower card once again, which makes frequent appearances on the show. 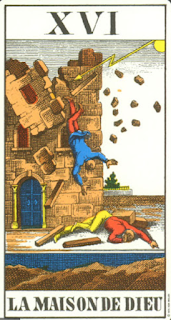 John: I thought it was great the way they had Quentin stop by the cottage at the perfect moment to hear Hannah say that "ANGELIQUE IS BACK IN COLLINWOOD," only to leave before she could finish her explanation. Unfortunately, they didn't give Quentin an opportunity to confront Alexis with this newfound info.

Christine: Typical soap opera misunderstanding. Since they seem to be trying so hard to imply that Alexis is Angelique, I think we can almost be certain that she truly is Alexis.

John: We got a Ghost and Mr. Chicken player piano moment today as Bruno's "Ode to Angelique" played on the piano all by itself. Alexis assumes that it's Angelique, but I have to wonder if that's really true. It would seem pretty narcissistic for someone to play an ode to themselves...

Christine: I wouldn't put it past Angelique, but it's a little suspicious that the song was playing through quite a few notes before Alexis began screaming. The real question is... who used Bon Ami on the keys?


Second Down for the Count:
Barnabas was chained in his coffin 10 episodes ago. 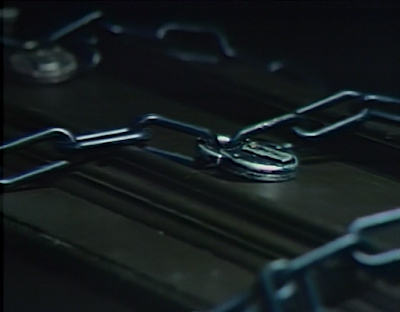 I remember the period of Barnabas locked in the coffin during the Parallel Time story as the most boring in Dark Shadows history, especially the Quentin, Maggie, Alexis triangle. On the other hand,I enjoyed Bruno, Cyrus and for some strange reason Hannah Stokes, to whom I felt oddly attracted. I have not the slightest idea why. Probably because she was one of the few characters at the time who was somewhat interesting.

See I am the exact opposite. I enjoyed the Quentin/Alexis story, but was bored to tears in the beginning because of the Cyrus/Yeager story. I loved parallel time after Barnabas and the gang came back from filming the movie. Thought the murder mystery was very intriguing.