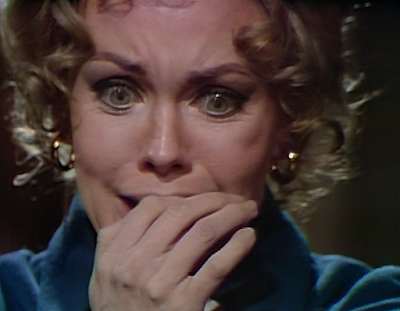 In the East Wing, Quentin hears Angelique's song playing, and then hears a scream. He rushes into Alexis' room and they watch as the piano plays with no one sitting at it. Alexis says that Angelique's spirit is in the room with them. Quentin says he can't believe it. He asks her if she's sure it was Angelique. She says she smelled Angelique's favorite perfume, too. Alexis gasps and picks up a bracelet. She asks if it's hers, and he says it was, and she always took it off before playing. Alexis says that Angelique can't rest because she was murdered. Quentin asks if he should call in the authorities to have her body exhumed. She says they have to do it themselves. She says the only reason it's confusing is that Angelique lacks the power to tell them more. 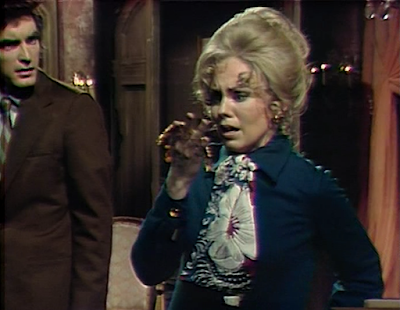 Sabrina works in the lab when Mr. Gladstone arrives. She explains that Cyrus is not there. He tells her he's dropping off another delivery. He asks her about her missing engagement ring. She asks him to give her the package. He tells her that only the doctor can sign for it, and that he'll wait for him. 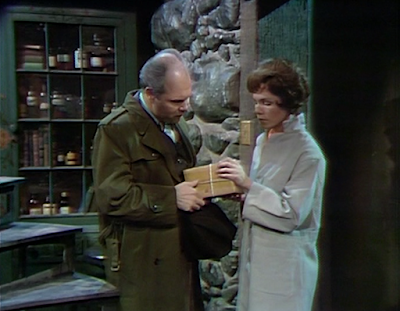 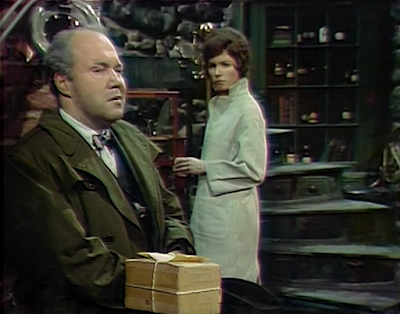 Quentin tells Alexis that she can stay in a different room, and offers to show her one. They enter a room, and Alexis responds oddly. He asks her what's wrong, and she asks him if he feels it. She asks if they're being followed. He tells her that everything will be alright, and shows her into a different room and closes the door. He walks away, disturbed by something. 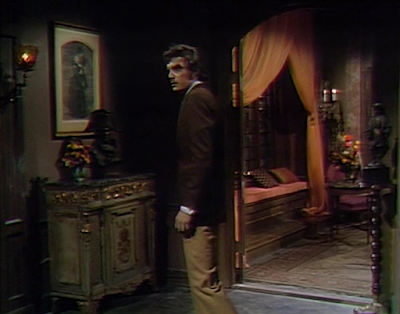 Cyrus thanks Gladstone for his delivery. He sends Sabrina to get them coffee. He tells Gladstone not to discuss their transaction in front of anyone—including Sabrina. Gladstone says there was a minor impurity in the prior batch, but he didn't think it would cause amnesia. Cyrus is sure that's the issue. Gladstone asks for details on whom he was performing his experiments, but Cyrus refuses to tell him. He shows Gladstone out, and tells him that he must take safeguards against impurities. Gladstone bids Cyrus good night. 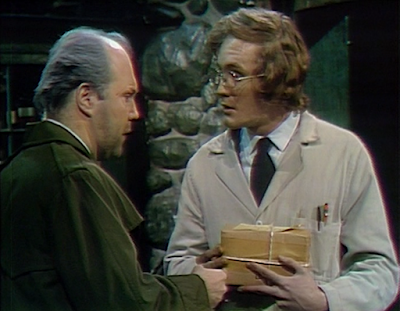 Cyrus hides the package when he hears Sabrina come down with coffee. She asks him how he can work late when he doesn't get enough rest. She asks Cyrus about the difficulty in the experiment that Gladstone mentioned. She tells him he should rest for at least an hour. He agrees, and heads upstairs. 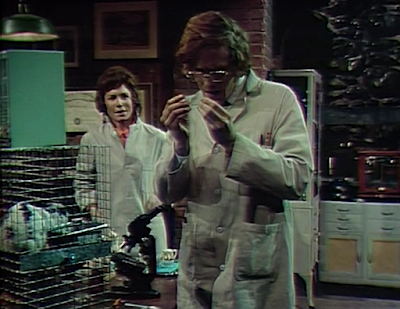 There's a knock at the door, and it's Alexis to see Sabrina about the seance. She asks Sabrina what she saw, and what she meant when she kept repeating murder. Sabrina asks what she knows about the first seance. Alexis says she knows that a man spoke through Sabrina, something about Bruno and Angelique that enraged Quentin. Quentin began strangling Angelique, the lights went out, and when they came back on she was dead. Sabrina says she saw it all again in the second seance. She says there was someone else near Angelique, but she doesn't know who it was. Alexis says whoever it was must have murdered her. 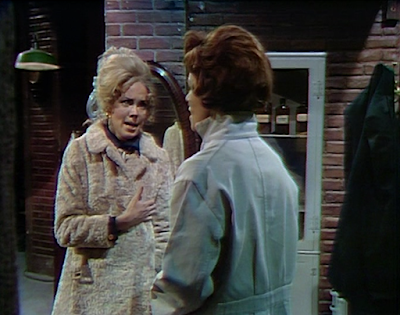 Hannah asks Quentin about the restless spirit in Collinwood. She says it's Angelique, and he concedes the possibility. She asks what he wants her to do, and he tells her to rid the house of whatever it is. She says it isn't always that easy. The lights go out, doors swing open, and Hannah begins to scream, clutching her throat. 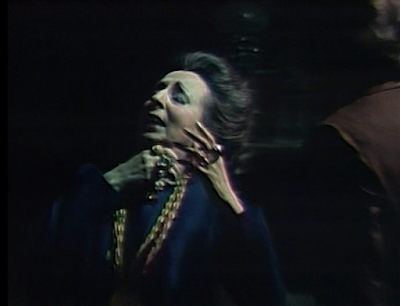 Quentin turns the lights back on, and asks her what happened. She says a hand was choking her, and that the spirit in the house won't be driven out. They watch as a drawer opens on it's own. She tells Quentin to look inside. He pulls out Bruno's sheet music with blood on it. He says there's a not on it, "must be tonight." Quentin says it must mean something. Hannah says she must leave the house, and that she's too frightened to try anything. He demands that she tell Bruno nothing, and if she does find out anything, she's to let him know. She leaves, upset. 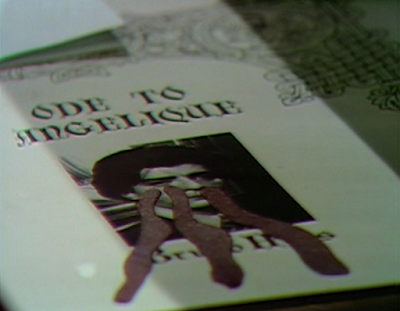 Quentin says he's never seen Hannah so frightened. Alexis asks when they'll find the answers to their questions. Hannah calls and tells Quentin that she read the cards, and that there is danger for everyone in Collinwood. He hangs up and tells Alexis that Hannah is predicting danger. He suggests that they all should leave. Alexis tells him to leave, and says that she'll stay there. She goes upstairs. Quentin wonders who it could be if not Angelique. He wonder what it all means. The drawer opens on its own once more, but it's empty. Doors open and slam shut. Quentin then hears Angelique's song. He calls to Angelique begging her to appear to him. He starts upstairs, but then returns to the drawing room, where he sees... 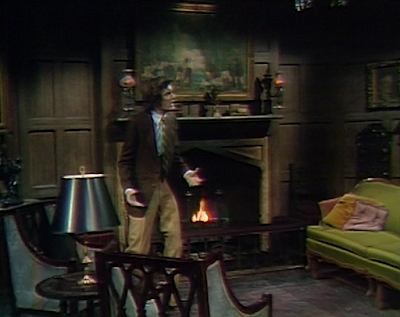 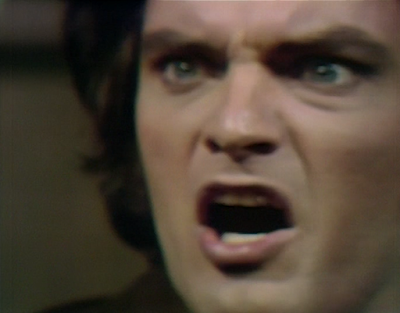 Christine: Well, just like Janet Findley, Hannah Stokes went from self-assured mystic in charge, to quivering, helpless female, fleeing at the first sign of trouble. How disappointing. I hope they allow her character to redeem herself, because she is otherwise awesome.

John: Some very weird camera angles in the lab today. Looks like the director was trying to be clever.

Christine: I hadn't noticed since I was so taken in by how creepy Mr. Gladstone was acting today. Maybe the odd camera angles added to the strangeness of his behavior, though. It is odd that he would so quickly notice that Sabrina wasn't wearing her engagement ring, and then make a point of mentioning it. 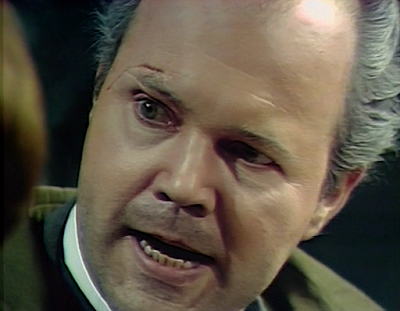 John: So now we know what really happened on the night Angelique died.
1. Quentin was strangling her.
2. The lights went out.
3. When the lights came on, she was dead.
If only we had a detective to help put the puzzle pieces together, we might know once and for all how she died...

Christine: Yes, but there's something they're calling blood on Bruno's sheet music, and before Quentin started strangling Angelique, he was mad about something that happened with Bruno. One must also consider that Cyrus has a fascination with evil, and was also present. Between all the men who adored her, one of them could have become insanely jealous and choked her. I wonder if William H. may have been in the vicinity during the time of the séance.


Second Down for the Count:
Barnabas was chained in his coffin 11 episodes ago.