Cyrus tells Sabrina that she'll be alright. She asks him what she said. Quentin comes in and says that Angelique was not murdered—she died of a stroke. Cyrus points out that whoever spoke through Sabrina might know better than they do. She says it's true, that the voices told her Angelique was murdered. Cyrus asks her if the voice she heard was the same voice from the first seance. Quentin tells her she was in shock. He adds that he doesn't believe in spirits or seances. He says he doesn't want or need the torment Cyrus has brought to the house. Cyrus tells him that it's too late. Quentin storms out. 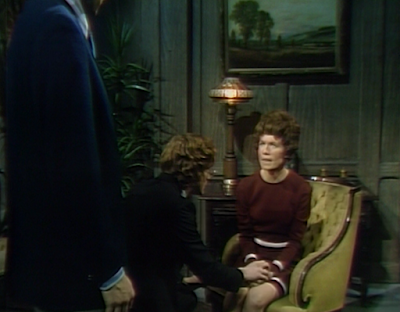 Cyrus asks Sabrina if she remembers anything else. She tells him he was always fascinated with Angelique. She admits being jealous of her. She says he knows Angelique was cruel and demanding. She asks him how close he was to her. He doesn't respond. She asks if he killed her. He denies it, and reminds her that she said just yesterday that he was a gentle man. She points out that he's fascinated with evil. She says that someone in that room killed Angelique. 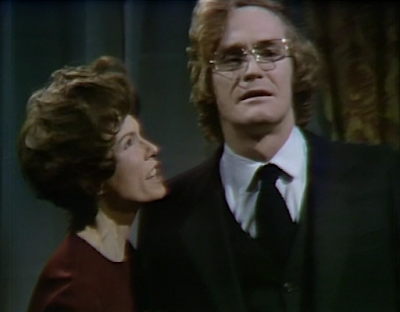 Quentin apologizes to Alexis for letting the seance take place. She says that Angelique was murdered. He tells her that she can't take Sabrina seriously. Alexis asks if there was an autopsy, and he confirms she died of a stroke. She asks if her father accepted that, and Quentin says that he did. Alexis says her father always loved Angelique, but not her. She reiterates that Angelique was murdered, and Quentin says she reminds him of her sister when she was angry. Alexis asks him who could have killed her. She says she won't leave Collinsport until she finds out. Quentin leaves her. 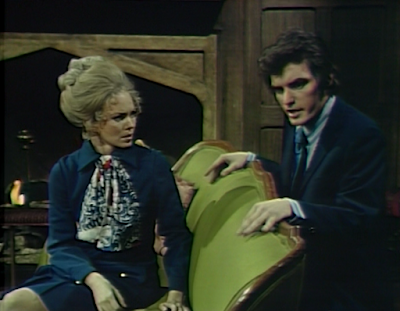 Daniel asks Quentin why Elizabeth is crying. He asks if Maggie did something to hurt her. Quentin says she's not there, and Daniel is excited to find that she's gone away, only to be disappointed to hear she'll be back. Alexis comes out of the drawing room and Daniel embraces her, calling her his mother and saying he knew she'd come back. Quentin explains that she's his aunt Alexis. Daniel says it's not true, and asks them why they're lying to him. He runs upstairs. Alexis asks Quentin to let her talk to Daniel. 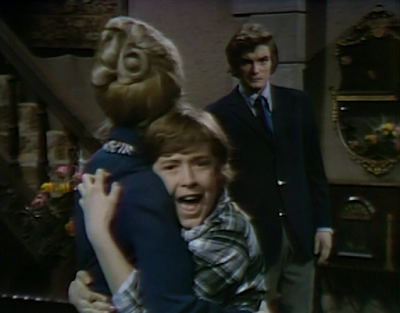 Cyrus asks Sabrina if she's alright. She says she remembers seeing the figure in her room, and Cyrus asks if she remembers anything else about him. She asks Cyrus why she came to Collinwood. He asks how he felt when the man came into her room. She says she was terrified, that he was pure evil. He says the police followed the man and saw him enter his house. She asks if he took anything. Cyrus says they'll never see or hear from him again. She asks why he would take her engagement ring, and take nothing from his lab. He tells her that he'll make sure that she's never frightened like that again. 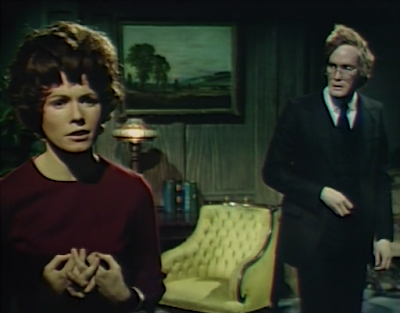 Alexis comes to Daniel's room, and asks if he loved his mother very much. He says they fought, too, but she knows that. She tells him that he must accept that she's a different person. She tells him to call her Alexis and she'll go. He tells her to let him think, and she leaves him alone. 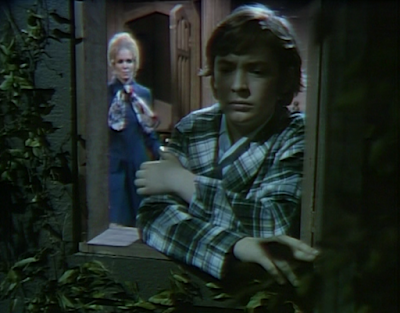 Sabrina says she needs to apologize to Quentin. She asks Cyrus what she started, and he says it started with the first seance. She asks him what's going to happen, and then says they should leave the house and never come back. She says there's a terrifying evil in the house. Alexis watches them leave from the top of the stairs. 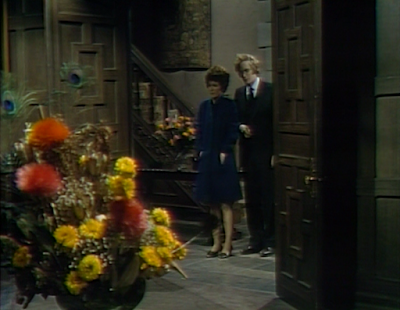 Cyrus is on the phone complaining about the side effect of a loss of memory when using the compound. He asks them to rework it, removing the cause of the amnesia. 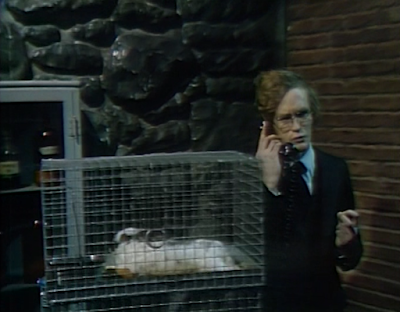 Quentin reminds Daniel that his mother is dead as he tucks him into bed. 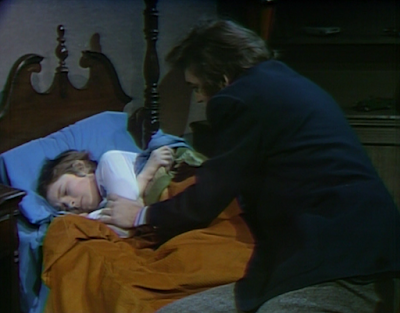 Cyrus arrives at the Eagle Bar. He orders a sherry. The bartender says he doesn't get much call for sherry, but he has some. He asks Cyrus if it's his first time there. Cyrus asks him if he saw him last night, and the bartender says he doesn't remember, with all the excitement. He says a big bruiser came in with pockets full of money. He says he threw a hundred dollar bill on the bar for a bottle of scotch. He says the man drank half the bottle and got meaner with every slug. He said he was going to break Jack Crowley's arm. He says they started arguing, and when he went to break it up, he got hit. Three guys jumped the man and he threw one out the window. 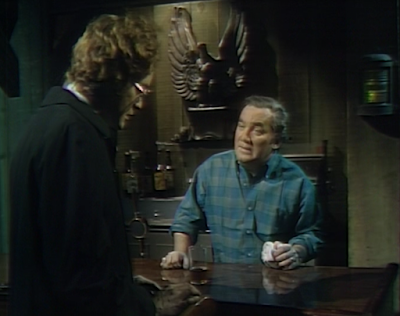 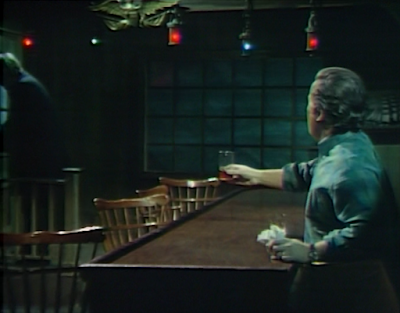 Daniel hears his mother's voice in a dream. He gets out of bed and the voice tells him to look toward the window. He says he can't move, and begs his mother to come to him. She disappears, and he hears her laughing. 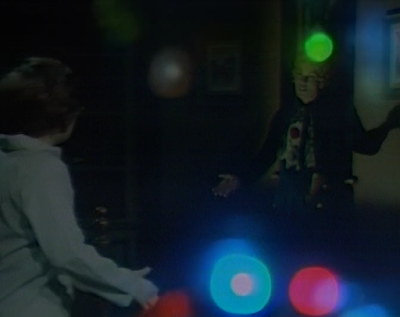 Alexis comes in and wakes him, asking him what's the matter. He says it was a dream as she consoles him. He asks her to promise not to lie to him. She agrees. 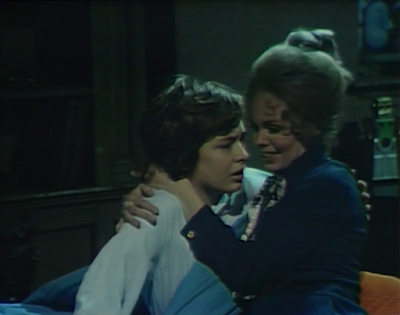 He asks her if she really is his mother, and begs her to confirm it. She looks over and sees Quentin standing in the doorway. 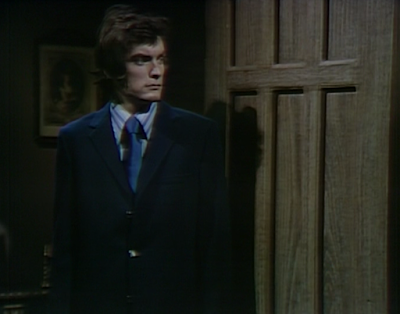 John: So how long until we get to see poppa Stokes reunited with his estranged daughter Alexis? At least it's perfectly clear who will be playing the role.

Christine: I'm hoping he may visit before the week is up. The shot of Daniel at the window of his room along with the dreams of his not-so-benevolent mother recalls to mind episodes from long ago, when David's Phoenix mom was appearing to him in the night. 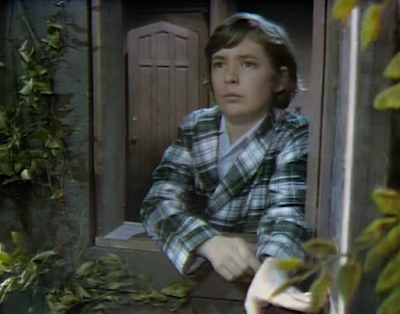 John: Ken McMillan is back, but on the other side of the bar in parallel time. Back in episode 899, he was the mysterious stranger who helped Paul Stoddard deal with the strange mark on his wrist. And as I pointed out at the time, would go on to play the constable in Tobe Hooper's adaptation of Stephen King's Salem's Lot! His best scene today came when he points to the main window in the bar as he describes how someone was thrown through it last night, and then quickly adds that he just got it fixed today! 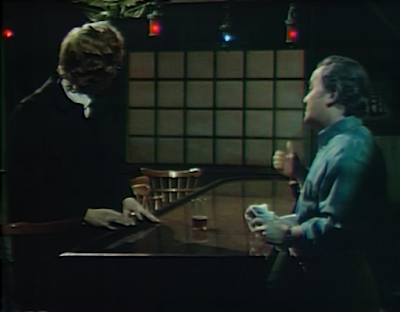 Christine: I like that Bob Cobert is cranking out the same tune on the juke box at The Eagle that played at The Blue Whale so frequently at the beginning of the series. 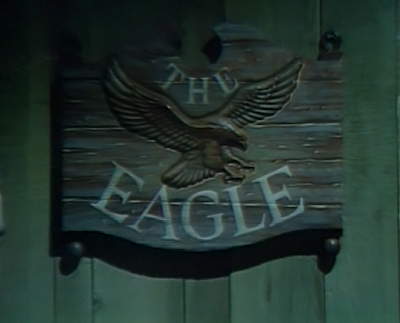 John: For 1970, someone was really ahead of the game with the disco lights. I wonder if that's going to be the new go-to dream-sequence indicator.

Christine: It seems to be born out of the psychedelic era to me, though perhaps transitioning to disco. I will resist the urge to set that dream sequence to Elton John's, "Daniel." 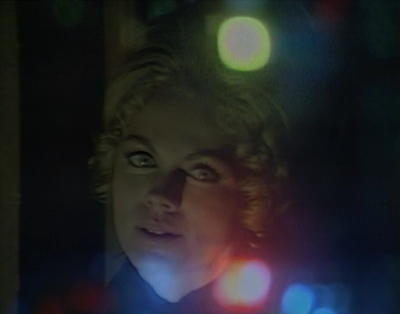 Second Down for the Count:
Barnabas was chained in his coffin 9 episodes ago.