Quentin and Cyrus remove Angelique's coffin from her crypt. Alexis begs him to stop defiling her sister's grave. She tells him if she stops, she'll leave Collinwood forever. He asks her if that will stop what's happening in the house. She tries to stop him, but he opens the coffin. Together, they look down at the contents of the coffin in shock. It's Angelique, but perfectly preserved over six months after she died. Cyrus says there is not scientific explanation for the condition of her body. Quentin asks if she could have found a way to survive after death. 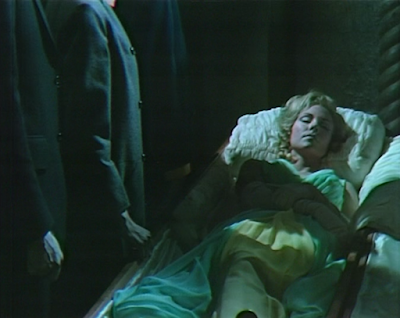 Alexis asks him to close the coffin. He refuses. He admits she's dead, but adds that her body is preserved. He says for their peace of mind, her body must be destroyed. He says he'll have her cremated, and she refuses to allow it. He asks her how many people will believe she's dead after they hear the condition they found her in. She says if they lie about it, no one will know any better. They close the coffin, but do not reinter it. She asks if he still doubts who she is, and he says he's sure she's Alexis. 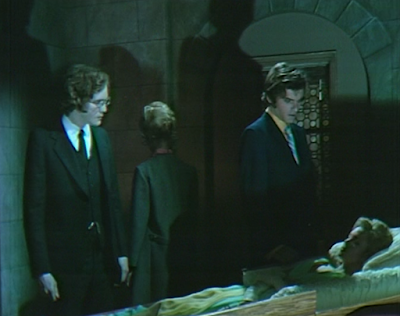 Trask is in the drawing room when a window starts banging. He carefully closes it. He hears the front door, and sees Amy has entered. He tells her she is supposed to be at the Loomis house. She says it's lonely there. Trask tells her that Quentin will blame him if he finds her back at Collinwood. She asks him what's wrong, and he says it's nothing. She says he looks scared, and he says he's just tired. He goes to take her back to the old house when Amy asks if Quentin has heard any more about Dameon. Trask accuses her of having seen Dameon again, and shakes her, demanding to know where. She screams and asks him to let go of her. Quentin comes in and asks what he's doing. Amy says she asked about Dameon and he got mad at her. Quentin sends Amy into the drawing room, and Trask says he lost his head. He says he's felt an evil presence in the house since Dameon returned. Quentin goes into the drawing room to talk to Amy. 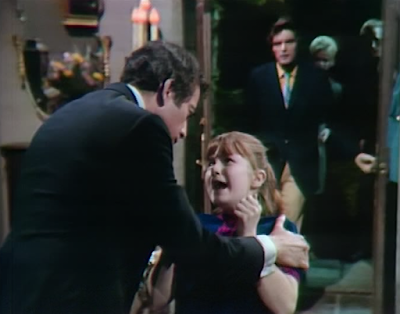 Alexis tells Trask that they just viewed Angelique's remains. Cyrus confirms that her body is in the tomb, at rest. Alexis says the house is not full of ghosts. Trask says he believes what they're saying about Angelique, but he insists that there's still an evil spirit in the house. He leaves them. 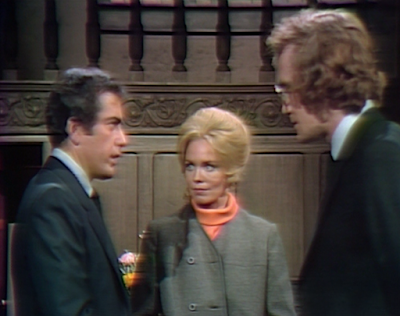 Cyrus tells Alexis that he agrees with Trask. He offers to take her up to her room to speak with her. They go upstairs, as Trask sneaks back in and watches. 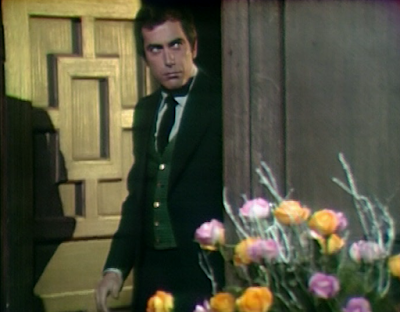 Alexis asks Cyrus what he wants to talk about. He asks how well she knew her sister. She says they were never close, and that she didn't really know her at all. Cyrus says that they may have known her better than Alexis did. He says he shared Angelique's interest in the occult. He says she was never afraid of dying, saying she could survive death. He never believed her before tonight. He says it's not physiologically possible, but he's convinced that she has. She doesn't believe him. Cyrus says he thinks Quentin is right in suggesting that her body be destroyed. 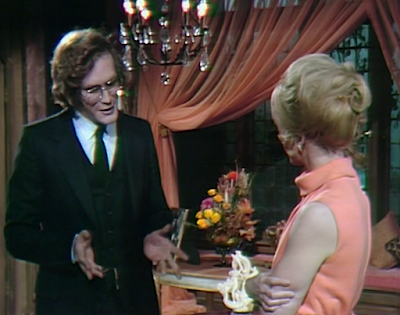 Amy tells Quentin that she'll do what he tells her, but she doesn't want to go back to the Loomis' house. He asks why. She says he wouldn't believe her. She says there's a spooky feeling in that house. She says that something is happening there, and it has her frightened. 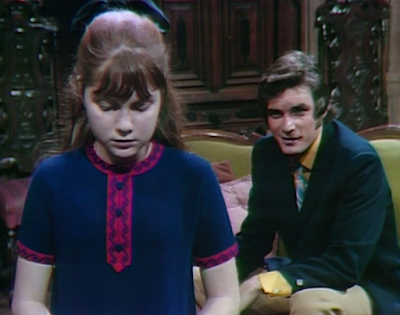 He says she can't say that without explaining why. She says she doesn't understand why. She mentions Carolyn is never there, and Will is too busy on his new book. He says Will hasn't written a book in five years. He asks her about the book. She says she found two pages in the trash. and he asks to see them. He reads the pages, which refer to his having written the complete biography of Barnabas Collins, only to find out that the story was pure fiction. In his new book, he will set the record straight on the life of Barnabas Collins. Quentin says he read his original book, and can't imagine how he'd find out more about him to write about. 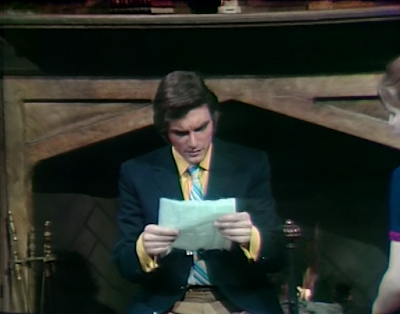 Alexis is gazing at Angelique's portrait when Trask comes in. She asks him to do something for her without Quentin's knowledge. She asks him to drive her to her sister's tomb in 10 minutes. He agrees to pull the car around. 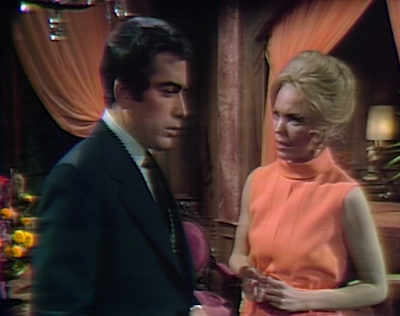 Trask and Alexis arrive at the crypt. She tells him to wait in the car. She assures him she'll be alright, and won't be long. She goes in and opens the coffin. She tells Angelique that she doesn't know what her secret was. She says that she knows that it's wrong, but her body must be destroyed. Angelique opens her eyes, and tells Alexis that she is right, someone must be destroyed, and it will be her. 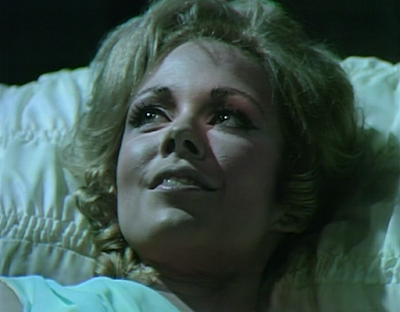 John: How is lying about Angelique's condition going to help anyone if the ones who found her believe that she's truly haunting Collinwood? 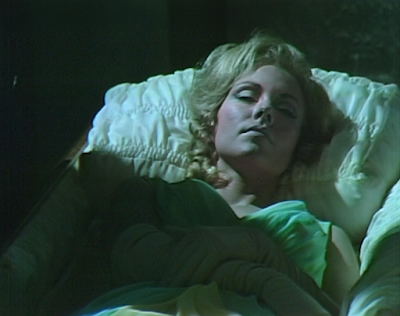 Christine: It spares those who aren't aware of her lack of decomposition the anxiety of knowing she may be lurking about the place. Trask seemed to exhibit more of his parallel relatives' traits today by causing some serious shaken Amy syndrome. Meanwhile, we have to wonder why William H. Loomis threw away such a brilliant introduction to his vampire novel, and marvel at how bored Amy must have been at the Old House to go rooting through his trash just to find some reading material. 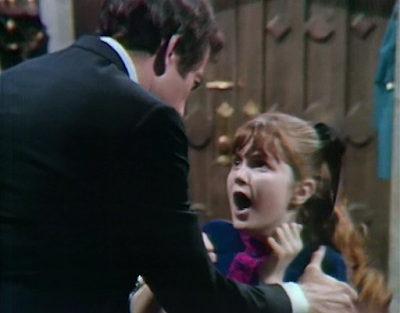 John: What was with the extra-cheesy music when Alexis returns to the crypt? And the jarring cut right before Angelique spoke to her. Did Robert Cobert take the day off, or was he too busy working on House of Dark Shadows to create a new music cue?

Christine: Clearly, you've been stuck inside the house too long. "Cheesy" is not a word to describe Cobert's music cues. I thought the eerie music established the proper mood for making it truly frightening when Angelique opened her eyes and began speaking from her coffin. The jarring cut is from having one actress play two roles on a show that does one take. Did you notice in the first scene at the crypt when an Alexis double stands in and faces the wall Blair Witch style so Lara Parker could play dead in the coffin?

John: Touché, DS scribes. You found a way to reintroduce Angelique that I didn't see coming. Well, we all saw her return coming, but I didn't predict this was how they would do it. Now the question is, will Angelexis have full knowledge of all the conversations that her sister had with all the players in and about Collinwood? Or will she have to fake her way through, dropping hints that she may not be who they truly think she is... (Bruno, Daniel and Hoffman notwithstanding!)

Christine: What will be exciting to see next week, is if she will make her sister take her place in the coffin while she still breathes, and how she will go about seeking revenge on Bruno for killing her, as well as who else will become a target of her ire. Let's hope a flurry of spells, incantations, poppets and potions are about be unleashed. What a way to celebrate 1000 episodes. 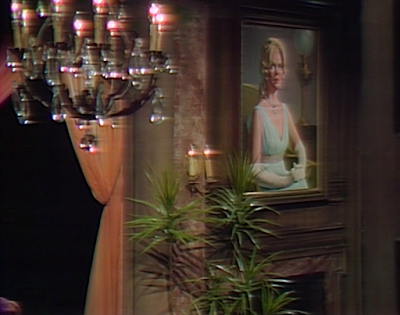 Second Down for the Count:
Barnabas was chained in his coffin 18 episodes ago. 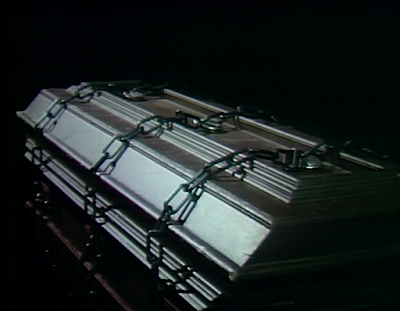