Quentin hears voices in Angelique's room. He opens the door, and when he sees who he thinks is Daniel and Amy, he yells at them, but they don't respond. David and Amy are talking about Dr. Hoffman, and Barnabas' having been caught there. 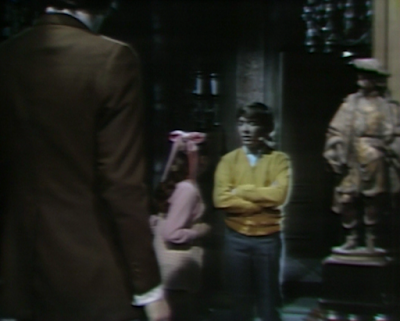 Quentin asks Amy if she can hear him, and from behind him, she says she can. He turns to see Daniel and Amy standing behind him. Daniel asks him if something is wrong. He tells them nothing is wrong. He sends them away to play. As they're leaving, Quentin asks Amy if Will spoke to her about Barnabas. She says that he didn't; she just found the papers he wrote about him. 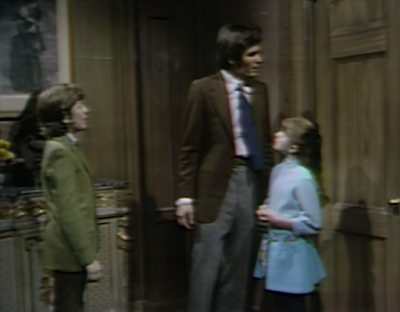 Quentin goes back to the door and opens it, this time into Alexis' bedroom. He explains to her that the room was empty a moment ago, with Daniel and Amy standing inside. He tells her that he then saw them in the hall behind him. Angelexis tells him that she's been there the entire time. He says he thought that when Angelique was in her final resting place, the strange behavior in the house would stop. He tells her that at least they're rid of the ghost of Dameon Edwards. She sounds surprised to hear his name. He says Bruno might be right in thinking that Angelique's spirit was responsible for Dameon appearing. Angelexis asks if he's done anything to find her sister's murderer. He says he doesn't think she was murdered. Angelexis asks him to leave her alone. He tells her that if Angelique had been murdered, he would be equally interested in finding her murderer. He leaves and Angelique wonders why she's so cold. 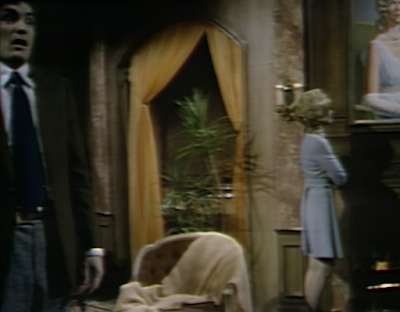 Amy and Daniel are going through trunks in a the old house, which Daniels suggests is something girls would do. He asks if she ever plays in the basement, and she says it was always locked. He tells her it never used to be. He tells her that his Uncle Will is crazy. He says there's a passage to the basement from the beach. Amy refuses to join him. Daniel starts to leave, and she tells him there's a sword in the room. He goes looking for it, and begins to hear a heartbeat. Amy says he's just trying to scare her. He says it's coming from a picture, and shows her the portrait of Barnabas Collins. 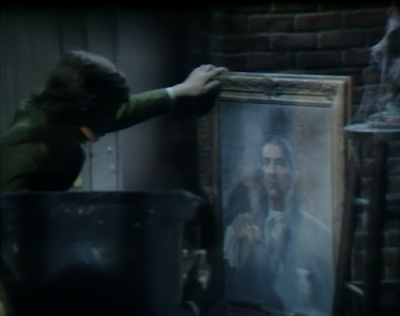 Amy screams and faints. Daniel manages to wake her, and she repeats chains and trap. A man comes in who Daniel refers to as Fred. He explains that something happened to Amy. He asks what he did, and Daniel says she saw the painting and fainted. 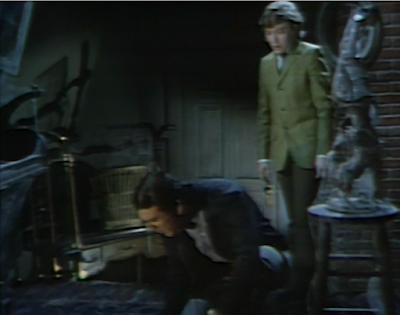 Quentin asks Daniel if he was trying to frighten Amy. He said he isn't. Fred reiterates that Amy kept saying trapped and chained. Quentin thanks Fred for bringing Amy back to Collinwood. He leaves, and Daniel asks Quentin why she fainted. 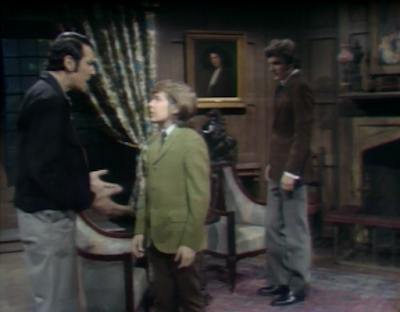 As Fred is leaving, Angelexis is coming downstairs, feeling cold. Fred says he knows what to do about that, and embraces her. He says he's been waiting to hold her like this ever since he saw her. He tells her to meet him later. She tells him to kiss her. He starts to, but Quentin comes out of the drawing room. Fred leaves. 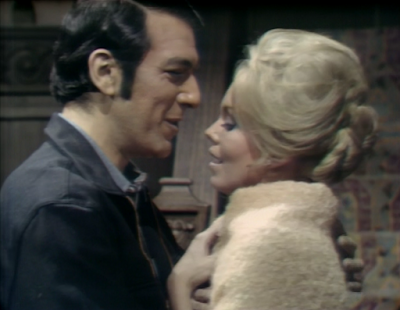 Hannah is dealing tarot cards when Angelexis comes to see her. She says that her sister came there to do things she couldn't do at Collinwood. Angelexis asks her to read her fortune. Hannah says she sounds just like her, referring to Angelique. She says she didn't think Alexis believed in such things, and adds that she only tells what she sees in the cards. 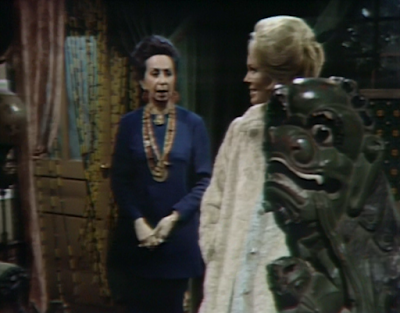 She deals the first card—the tower of destruction. Followed by the moon inverted. Hannah stands up and tells her to leave. Angelexis asks her to tell her what it means, and Hannah says she has no future. Angelexis then asks her to read her palm. Hannah does, and says that she's not Alexis—she's Angelique! Angelique says she knew that she'd come back, and asks if she wants to know how she did. Hannah says she doesn't. Angelique reminds her that she introduced her to the occult. She asks Hannah where Julia is, and she tells her that Quentin sent her on vacation. 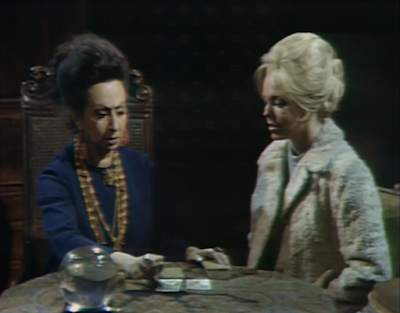 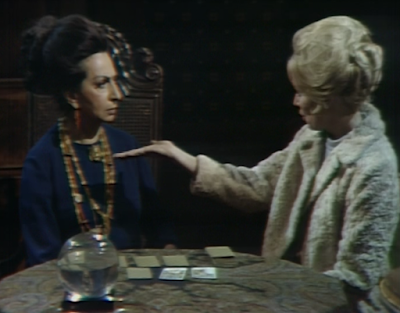 She then asks why Dameon Edward's ghost is there. Hannah says he cannot rest. He has threatened the children, Quentin and Bruno. Angelique asks about Trask. Hannah tells her that she knows why, and Angelique says she feels the cold of a tomb. Hannah asks her why she came back. Angelique tells her she came back to have Quentin's love. Hannah realizes that she wants to kill him. Angelique says he'll want to die when he finds out who murdered her. Hannah didn't realize she was murdered. Angelique starts to tell her, but feels the cold again, drawing her back into the tomb. She tells Hannah to go to the Loomis house and bring a man who works there back to her. She threatens to haunt her if she doesn't help, so Hannah leaves. 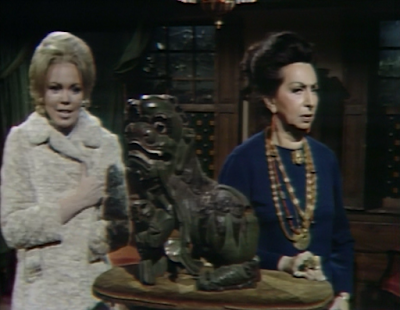 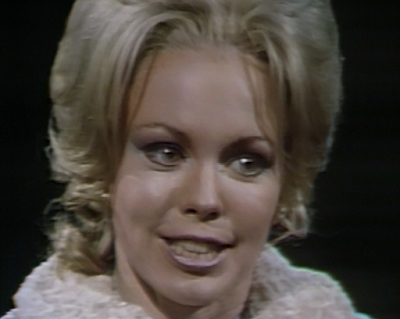 Quentin asks Amy if she's feeling better. She says she is. He asks her what happened tonight when she saw the painting. She says she saw his eyes, and he needs help. Quentin tells her that Barnabas died 200 years ago, and she says she knows. 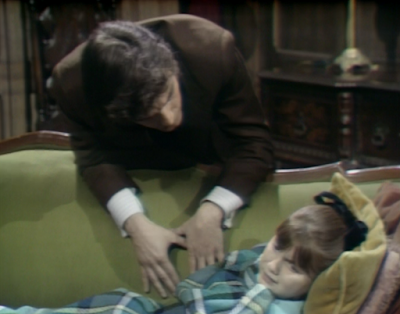 Hannah brings Fred to Angelique. They embrace, and she says she feels warmer in his arms. He suddenly feels cold. She tells him to look at her. She says he will feel cold, but must not look away from her. She forces him to kiss her. His eyes go wide as he tries to break away. She finally lets go of him and he falls to the ground. She calls Hannah, and when she arrives, she says she's alright now. Hannah sees Fred on the floor, and says he's dead. Angelique says that this is how she lives now, and this is how Quentin will live with her, for eternity. 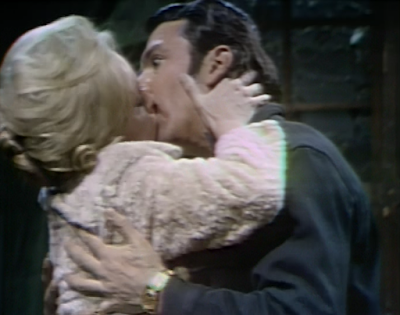 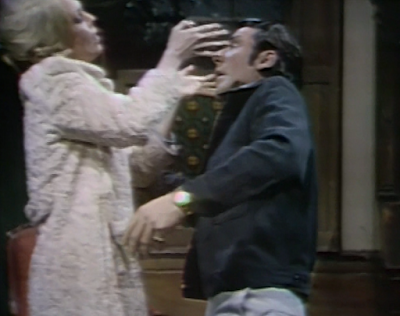 John: So much for my excitement about getting some more non-parallel 1970 Collinwood time with Amy and David... though it does seem promising that Amy and Daniel may soon bring about the parallel-time return of our old pal Barnabas!

Christine: It would be nice to see some crossover between the time bands, though I suppose it could get pretty confusing. Hannah Stokes has a cool 70s pad with beaded curtain, a gargoyle, a crystal ball, and hip clothes to boot. No surprise to see The Tower card show up in a reading again. 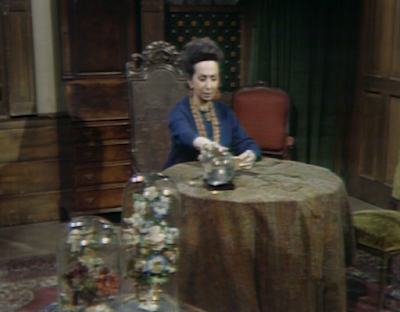 John: Kudos to Wilfred (Fred) Block, who despite being a one-episode red-shirt, got to spend the bulk of his few minutes of screen time locking lips with Lara Parker! I don't even know if Barnabas has that much time on the smooch-clock with Angelique! 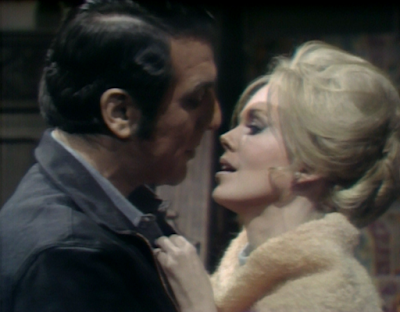 Christine: Lucky Fred, living out every young school boy's dream, up until he got the life sucked out of him.

John: Does Angelique exist in parallel time as some sort of soul-sucking vampire? Since she attributes her return to her interest in the occult, it would seem like she hasn't been around for hundreds of years... though that factoid may well be re-written when we get around to flashback-parallel time.

Christine: It makes sense now why she surrounded herself with virile young men. She must have been feeding off all of them. Apparently, Quentin was not enough for her. Of course, I was hoping we would get to see more portraits in the attic at the Old House, but why did Barnabas' portrait cause Amy to faint, why is it even at the Old House when it's always been displayed at Collinwood, and why is it showing up now?

Second Down for the Count:
Barnabas was chained in his coffin 21 episodes ago. 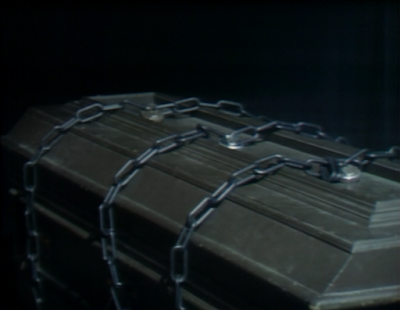 I've nicknamed that character "Fred Shirt". Was surprised to see his full character name (Wilfred) in the credits as I don't think anyone actually called him that during the episode.

I thought that was interesting too, Paul. Why include such a random detail in the credits for a one time character? I wonder if it was some inside joke or if the actors couldn't bring themselves to call him Wilfred.