In the drawing room, Amy goes to the window and shuts it. She turns and sees Mr. Edwards in the room with her. He doesn't say anything, but beckons her to follow him. She does, and he leads her towards the kitchen. She asks if it's like one of the games he used to play with them, and follows him. Quentin returns to Collinwood and sees Amy's suitcase, but not her. Trask comes downstairs, and Quentin asks where Amy is. He sends Trask to look for her upstairs while he looks for her downstairs. 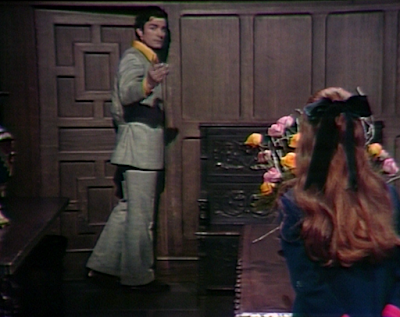 Dameon leads Amy down into the basement. 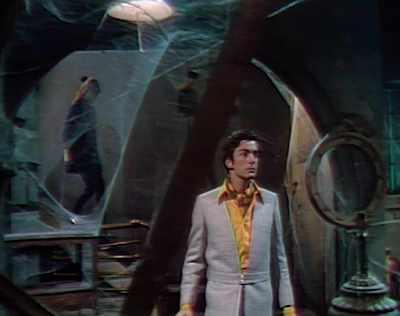 Trask comes downstairs ad tells Quentin he can't find Amy. Quentin reminds him that he was not to leave her alone.

Dameon waves for Amy to follow him, and he walks through a wall. She screams.

Quentin asks if Trask checked the attic, and they start that way. Amy shows up and asks why she left the drawing room. She says she thought it was a game, but games never scared her before. Trask asks if she saw him, and she says she saw Dameon again. She says he made a motion for her to follow him, so she did. She says she followed him into the cellar, and he walked towards a wall and disappeared through it. Quentin tells her not to be afraid. He asks her to take him to the room. She agrees. They leave together, and Quentin tells Trask he's not needed. Trask puts on his coat and heads out of the house. 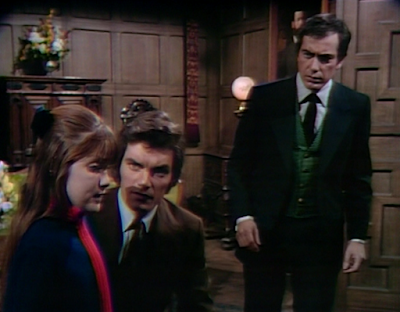 Quentin and Amy make their way to the basement. He asks her to show him where Dameon disappeared. She points it out, and asks him to be careful. He knocks on the wall to determine it's solid, and then asks her if she's sure he went through the wall. She tells him she saw it, and it was terrible. She says she doesn't want to stay any longer, and he takes her back upstairs. 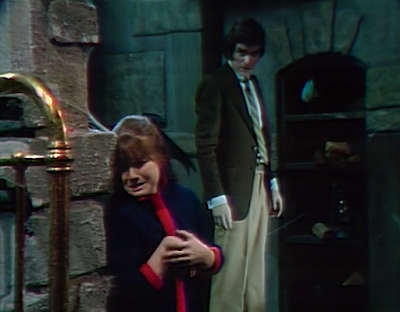 Trask visits Bruno and tells him to leave Collinwood. He says he's not safe while the ghost of Dameon Edwards is around. Bruno asks if someone else would be in danger, too. He then asks how much Quentin paid him to try and get him out of there. He then asks if it was Trask's plan. Trask tries to convince Bruno that he's trying to help him. The phone rings, but Bruno ignores it. Trask answers it, and tells him it's Dameon. He says that Dameon says it's only a matter of time. 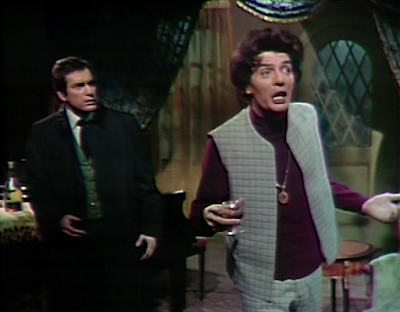 Bruno takes the phone, but there's no one there. Trask swears it was Dameon. Bruno says they'll go see Quentin to tell him to stop playing his tricks. He tells Trask that someone is trying to shake them up, and then throws Trask out of the cottage. Trask leaves and the phone rings again. Bruno answers it and hears someone say it's just a matter of time, and then hangs up. 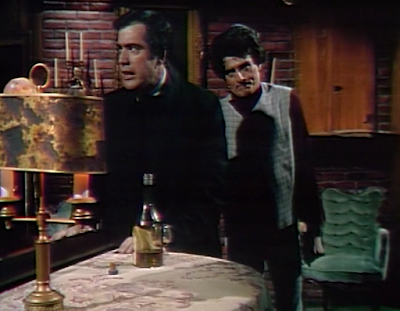 Sabrina tells Cyrus she was hoping he would ask her to come with him. He explains that he'll be working on business the entire time. He assures her that he'll only be gone for a few days. Sabrina finds the IOU and asks him who John Yaeger is. He says he's just a friend who owes him a lot of money. 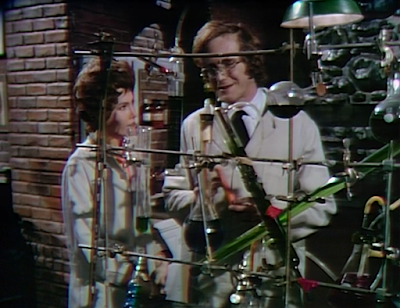 Bruno's phone rings again, and he unplugs it from the wall. His piano then begins to play Angelique's song all on it's own. Bruno is terrified. He refuses to believe it, and tells the piano to stop. 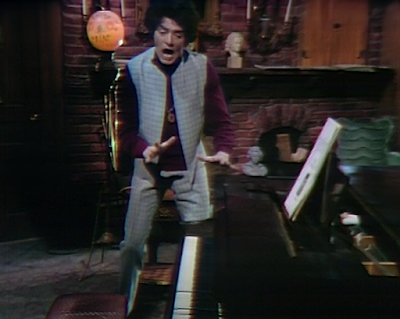 He then tells Dameon to go back to his grave, and slams the piano cover shut. He turns to see Dameon in the cottage. He backs away from him, and then runs out the front door. 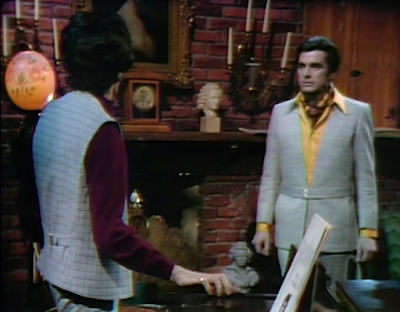 Cyrus brings his potion to the lab, and tells Sabrina to run along. She asks if he's trying to get rid of her, and he says she's been working too hard. There's a knock at the door, and Bruno rushes in. Cyrus asks him what's the matter. Bruno asks to speak to him alone, and Sabrina leaves them. She kisses Cyrus goodbye. Bruno tells Cyrus he needs a place to stay. He says he can't explain. Cyrus says it's impossible. Bruno begs him. Cyrus says that no one can be there when he works on his experiment—even Sabrina. Bruno tells him that he's desperate. Cyrus tells him he can stay upstairs, but he must not come into the laboratory under any circumstances. He leads Bruno upstairs. 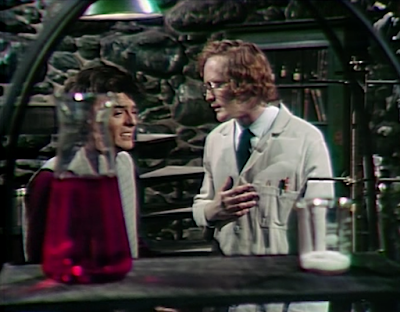 Cyrus returns to the lab and pours himself a glass of his concoction. 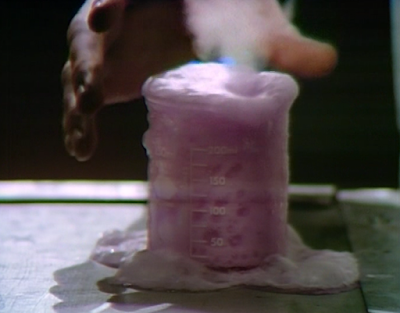 He raises the drink to his lips and downs it. 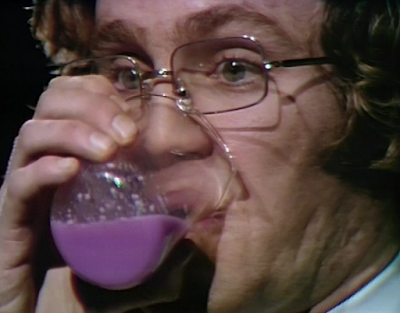 He drops the glass and chokes. He stumbles around the lab and groans before changing into a dark-haired man with a moustache: John Yaeger! 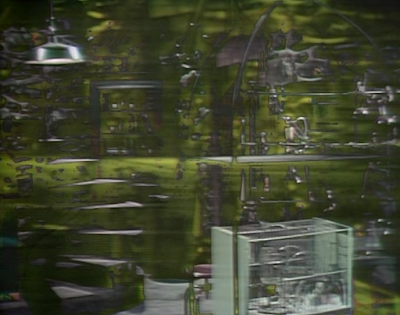 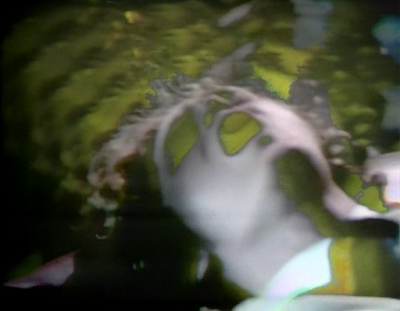 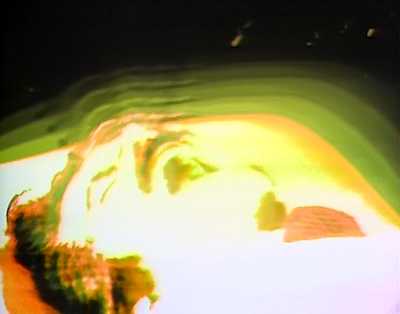 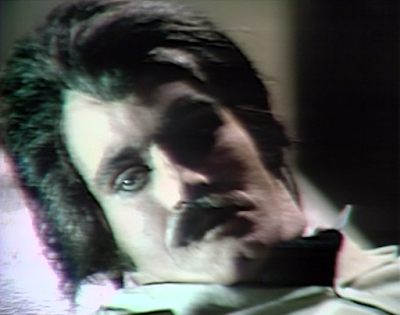 John: I love how Quentin investigates the basement wall, as if the real question is how someone passed through it, rather than the fact that the man in question is purportedly a ghost.

Christine: That was rather odd, but since he knew he was a ghost, I thought he might be searching for remnants of ectoplasm stuck to the brick.

John: I find it amusing that much like his normal-time counterpart, parallel-time Bruno quickly goes from tough guy dismissing Trask to whiner begging Cyrus for help.

Christine: All I could think about Bruno today was that his outfit was really outta sight! Parallel time seems to be a lot more contemporary than original time, which suggests we live in the parallel time. 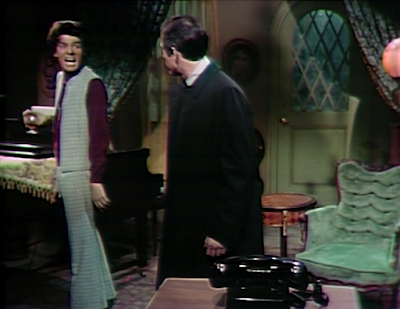 John: Was Dan Curtis ahead of the curve on the "Just Say No To Drugs" campaign with his psychedelic suffering of Cyrus? Or was he setting the stage to show that with the right stimulus, even the nerds out there can become a cool, long-haired dude? I look forward to getting to know John Yaeger!

Christine: The message seems to be that drugs can lead to a pornstache. Just say no!


Second Down for the Count:
Barnabas was chained in his coffin 13 episodes ago.