Hannah says Fred is dead. Angelique says that this is how she lives now, and this is how Quentin will live with her, for eternity. She asks Hannah if she's frightened of her. She says anyone would be. She tells Hannah to refer to her as Alexis, and then demands that she dispose of Fred's body. 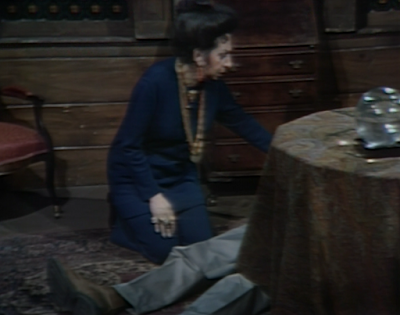 Hannah asks what they should do if anyone saw her leading Fred to her, and Angelique explains that he's a loaner and drifter, and won't be missed by anyone. She tells Hannah she's a coward. Hannah reminds her that she'll need warmth again, and she wants no part of it. Angelique says that her curiosity has turned to terror now that she knows someone who has returned from the dead. Hannah says that Dameon's spirit will not let her do what she plans. Angelique says that nothing will keep her from having Quentin forever. 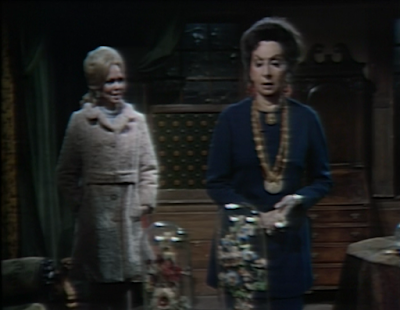 Trask tells Bruno that he was wrong—Angelique's body was in the tomb. It has since been burned. He tells Bruno that they're in trouble. Dameon's ghost is in the house because of them, not Angelique. Bruno tells him to stop simpering about the ghost until they have a reason. He accepts that the woman in Collinwood truly is Alexis, and adds that he didn't think he could be fooled so easily. 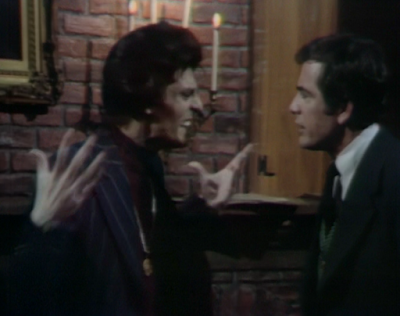 Angelexis returns to Collinwood and finds a telegram for Quentin. She opens it and reads it. It's from Maggie's sister, suggesting that if he calls her, he could talk her into returning as the time is right for her to return to Collinwood. Quentin calls to Alexis from the top of the stairs. She hides the telegram and tells him she was just thinking of him. He offers her a drink, and with one hand behind her back, she accepts his offer. When he steps into the drawing room, she crumples the telegram and tosses it into the fireplace.

Quentin hands her a drink. She says that Angelique loved the house, which upsets Quentin. She asks if he'd prefer to speak of Maggie, and that appears to get under his skin as well. She asks if he loves her, and he asks why she's bringing it up. Quentin explains that Maggie is an innocent child. Angelexis says that even as a child, Angelique was quite sophisticated. She picks up a statue and as she places it on the mantle, she asks what he plans to do. He says he'll wait for Maggie to contact him. He asks why she put the statue where she did, adding that it's exactly where Angelique placed it. 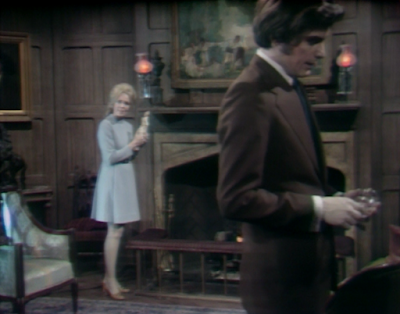 She asks if he still doubts who she is, and he assures her that he does not. They then hear a voice saying, "You know who I am." The lights go out, and Angelexis clutches Quentin. The voice then laughs. Quentin turns on a light and asks Dameon what he wants. The voice says, "She knows," but Angelexis denies it. 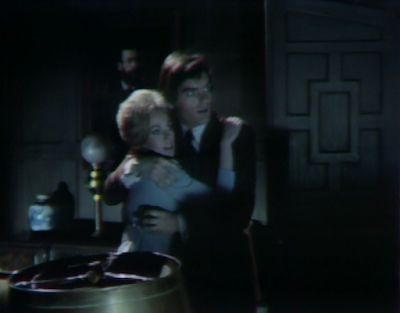 She says the ghost has her confused with Angelique. Quentin says she's implying that Edwards hates Angelique, but then dismisses that, believing that she's Alexis. He tells her that she could leave, and she says that she's going to stay. Trask enters, and Quentin tells him that Dameon Edwards is back. He asks Trask to explain why he can't rest. Trask tells him it's as much of a mystery to him. Quentin says he should think about it, and that he'll be around if Trask decides to say something more. 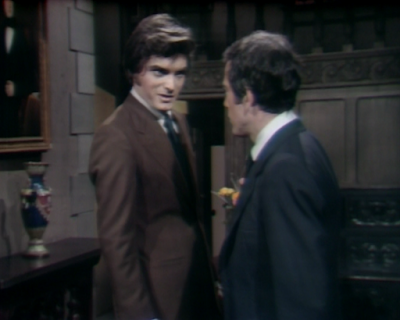 Trask goes into the drawing room, and speaks to Dameon. He asks for a sign that he's being heard. He doesn't get one, but he swears he didn't kill him. He says he should be after Bruno.

Bruno sneaks into Alexis' room. She asks him what he wants. He compliments her looks, and says it's proof how much he misses her sister. He says that she put passion in his music, and he critics don't realize it's gone yet. He tells her that he came to apologize. He truly believed that Angelique had returned, but he was wrong. He asks if they can be friends, and she asks if he can be anyone's friend. He kisses her hand and tells her that Angelique found him charming. She says that in time, she might. 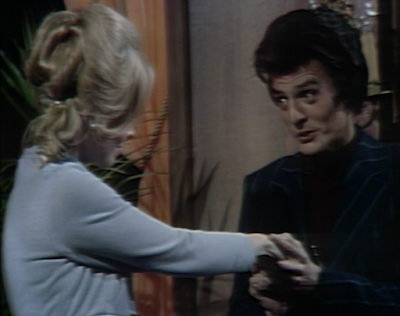 Trask begs Quentin to stop asking him about Dameon. He says if he knew anything he'd tell him.

Angelique stares up at her portrait. She then picks up a phone.

Hannah returns home as her phone rings. She answers it, and it's Angelique, checking to see if she finished her job. She tells her to come to Collinwood to deal with Dameon Edwareds. She says that she will exorcise the ghost through Hannah, and everyone will think that Hannah was responsible. 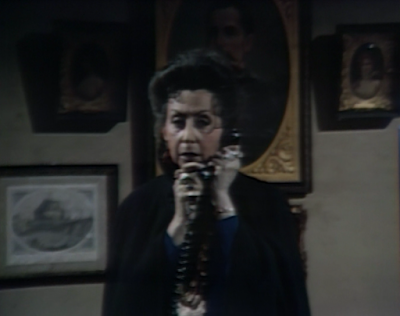 Quentin is asleep on the couch in the drawing room. In a dream, he hears someone calling to him. He asks where he wants him to go. The voice says he's at the last door he will ever enter, and tells him to follow his spirit. Quentin walks upstairs. The voice tells him that he is waiting. He beckons Quentin to come to the door. Quentin finds himself before Dameon Edwards who says he wants him to know how it will end. He leads him to a door and opens the door. Inside, Quentin's body is hanging from the rafters. Quentin picks up a note saying, "I had to do this to be with the one I love." Dameon laughs at him. 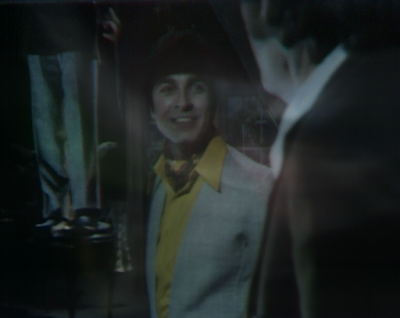 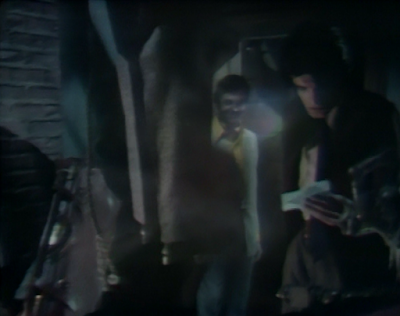 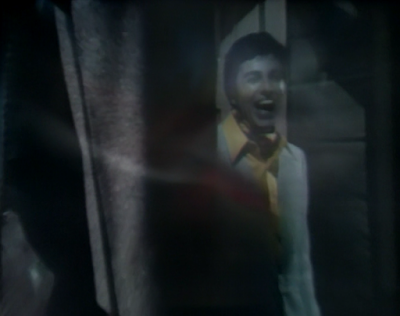 John: If Fred was a loner and a drifter, what the heck was he doing in Collinwood, how is it that Quentin knew him, and what was with his being so cozy with Angelexis? I feel bad for Hannah that she was left to clean up Angelique's mess. Fred wasn't a small guy. Thankfully, she seems to have the same high-speed grave-digging skills as all other residents of Collinsport.

Christine: I really wish we could have seen Aunt Hannah at work, dragging Fred's corpse out to be buried, digging a hole, dropping him in and covering him up without getting a speck of dirt on her dress or putting a single hair out of place. The woman is truly amazing! Portrait watchers should note that the Mustache Man hangs in parallel time at Hannah's hip 70s pad. 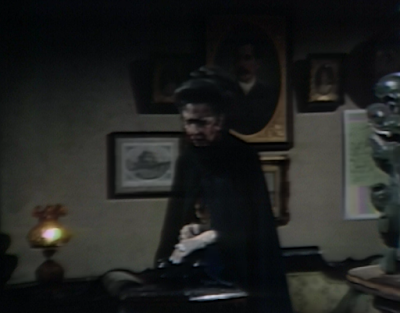 John: Wasn't Bruno just crying about the ghost of Dameon haunting him? Funny to see him berating Trask for basically doing the same!

Christine: I'm wondering if Angelique has OCD, being so particular about placing a statue in an exact spot on the mantel that she couldn't resist doing it, knowing that it could expose her for who she truly is.

John: So we still have no real understanding of who Dameon is, exactly how he died, or why he's doing what he's doing, but at least he showed us how things are going to end for parallel-Quentin—swinging at the end of a rope!

Christine: We also don't know why he's so happy about Quentin hanging himself. Is this how Angelique intends to keep Quentin through eternity? That's a plan that seems like it could backfire.

Second Down for the Count:
Barnabas was chained in his coffin 22 episodes ago.
Posted by John Scoleri at 6:00 AM