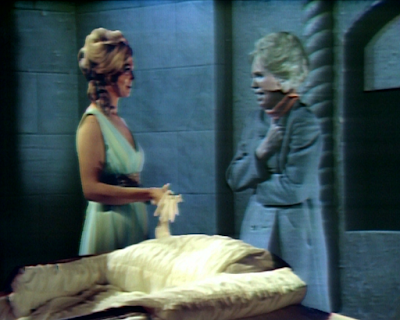 Trask waits outside the crypt, wondering what's taking Angelique so long. He decides to check on her, then hesitates. He wonders why she didn't want him in there. 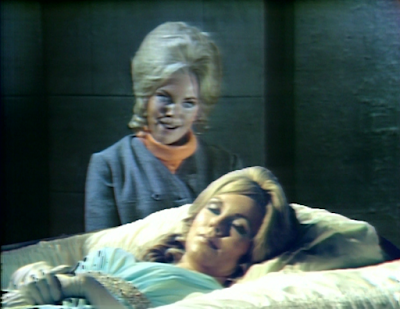 The lights go on and off and the chandelier swings in the drawing room at Collinwood. Quentin calls out to Dameon, asking if it's him. He asks who's responsible for Dameon's return. The lights come back on. 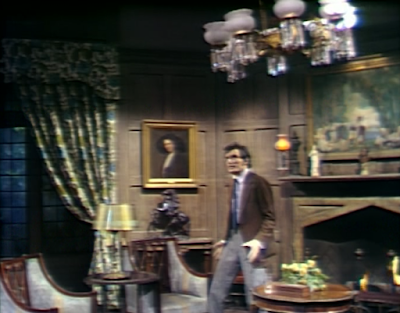 Angelexis and Trask return to Collinwood, and she dismisses him. Quentin invites her into the drawing room. She looks around as if she hasn't seen the place in a while. He tells her they must discuss Angelique. She says that she returned to her sister's tomb. She says that he and Cyrus were right, and that Angelique's body must be destroyed. 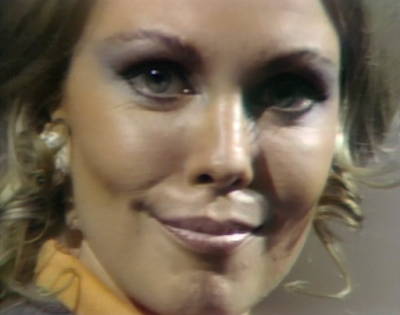 Quentin asks Trask if he's gotten a hold of Cyrus yet. Trask says he hadn't heard back yet, and will try again. He asks Quentin if he's decided what to wear to dinner with the Conway's, and Quentin tells him he has other plans, and tells Trask to let them know he has other plans. Quentin tries calling Cyrus. 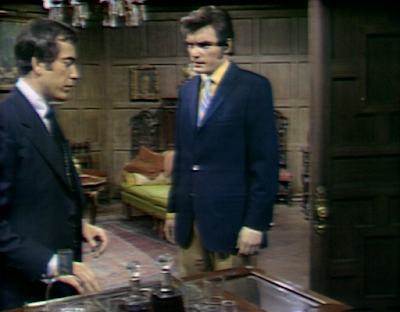 Cyrus is in his lab when the phone rings. Cyrus answers, and Quentin asks him to meet him at the mausoleum. He agrees to do so. There's a knock at the door, and he lets Chris in. Cyrus explains that he's very busy. Chris says he was following Cyrus orders, and pulls out a note he got from him. Chris asks him why he wants to transfer $5000 from Cyrus' account to an account for John Yaeger. Cyrus says Yaeger has been helping him. Chris asks if he's in some kind of trouble with Yaeger. Cyrus assures him that Yaeger isn't blackmailing him. Chris says he's going to need Yaeger's signature to open an account, and that he'd like to meet him, anyway. Cyrus tells Chris that he'll have him come around. Chris leaves the lab. 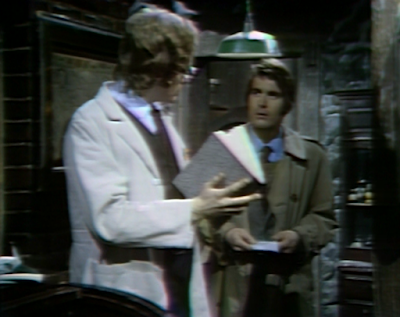 Cyrus meets Quentin at the mausoleum, and they go inside. He tells Cyrus that they must destroy Angelique's body tonight. He says Alexis has agreed to it. He tells Cyrus that he wants to drag the coffin out and light it on fire. Cyrus agrees they should destroy the body, but points out they might be seen. Quentin says they have to take that chance. He opens the coffin to see her one last time. He admires her beauty, and bids her goodbye. They carry the coffin out. 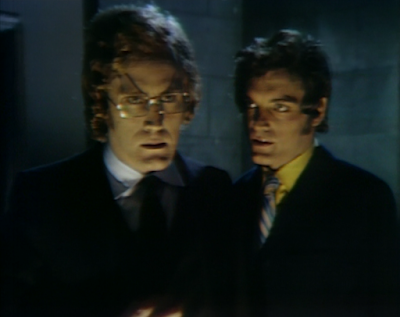 Quentin touches a torch to the coffin, and it goes up in flames immediately. 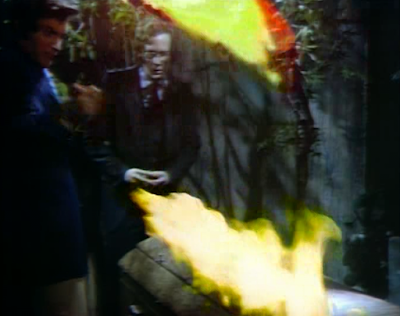 Angelexis is in her room in Collinwood when Trask enters. He tells her that Quentin has returned. Trask points out that she seems so at home in Collinwood that it makes it seem like Angelique never died. 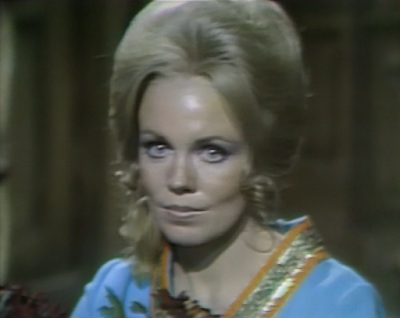 Quentin and Cyrus return to Collinwood. Quentin goes upstairs to get her, and tells Cyrus that he has to stay and have a drink with them.

Quentin tells Angelexis that they burned the coffin, saying there's going to be a change in atmosphere in Collinwood, including bringing Maggie back. Angelexis says she looks forward to meeting her; adding, under more favorable circumstances. He thanks her for coming to the mausoleum with them, and opening the coffin with them. He invites her down for a drink, and she declines. 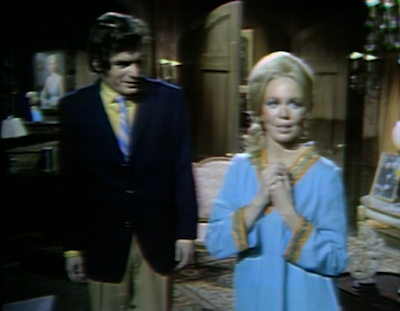 Cyrus waits in the drawing room, when he doubles over in agony. He sees hair on his hand, and turns into John Yaeger. He hears Quentin coming downstairs and closes the drawing room doors. 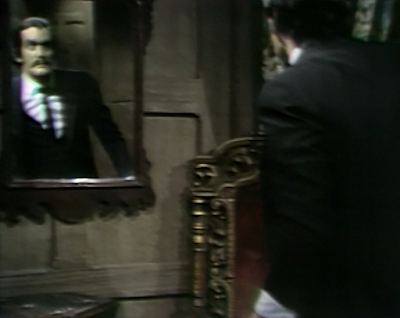 Quentin comes downstairs and is surprised to find the drawing room doors locked. He calls to Cyrus, asking if he's alright. 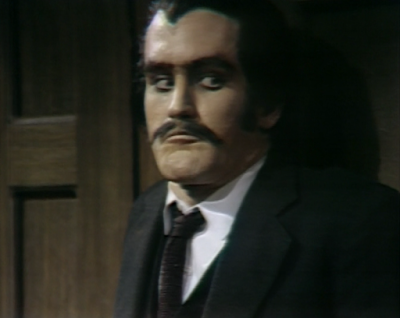 John: What was the point of Quentin's poltergeist moment in the drawing room? Why even bother having the ghost of Dameon show up if the actor who plays him has the day off?

Christine: My best guess is that it was intended to show that Dameon is all whipped up about Angelique's resurrection. Whether he is restless because he's displeased or delighted by it remains to be seen. 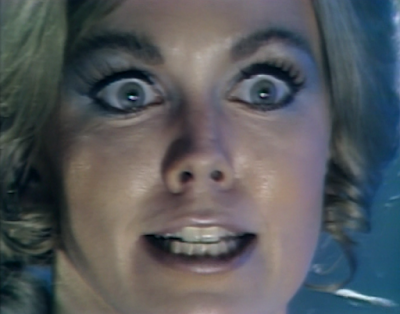 John: I was really hoping for a scene in the crypt where they opened the coffin and Alexis tried in vain to convince them that she was not Angelique before they roasted her! That would have been classic.

Christine: Yes, but it was oh so much more disturbing that they unknowingly cooked her while she was in a state of limbo, and not actually dead. That certainly was a flammable coffin though, wasn't it? 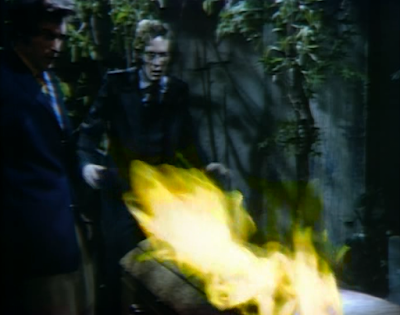 John: Um, okay... so now Cyrus doesn't have to drink his potion to become John Yaeger? Sounds like a pretty nasty side effect! I wonder if it goes both ways, and tough guy John Yaeger will find himself turning into nerdy-Cyrus at the most inopportune time...

Christine: The lack of control over the transformation is in keeping with the original Jekyll and Hyde story, and if it follows the original tale, Yaeger will need to use the "Do Not Touch" potion to resume his Cyrus persona. John Yaeger's appearance has evolved quite a bit since his arrival in Episode 996. It's funny that with all the manscaping he seems to be doing, he's kept those hairy hands.

Second Down for the Count:
Barnabas was chained in his coffin 19 episodes ago. 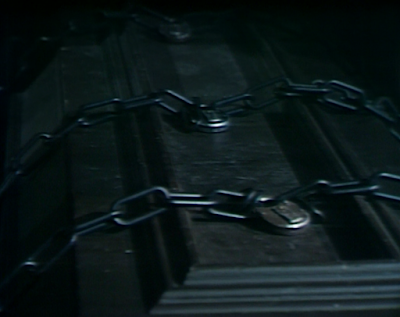