Maggie comes downstairs, dedicated to rising to the challenge of being the mistress of Collinwood.  She hears someone talking to Quentin in the drawing room. She looks in and sees Angelique. Sure that she's back, she runs upstairs. 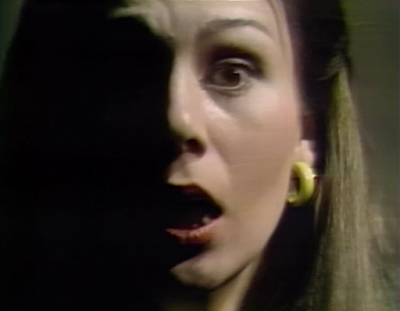 In the drawing room, Quentin gives the woman a glass of sherry.

Quentin knocks on Maggie's bedroom door. He asks her why she ran away. He says there's no reason for her to be afraid. Maggie says that she saw her. The woman steps into the doorway, and Quentin asks her to wait downstairs. He then tells Maggie that the woman is Alexis, and she's Angelique's twin sister from Florida. He tells her he wants them to meet properly. She doesn't want to, and he leaves her to go downstairs. 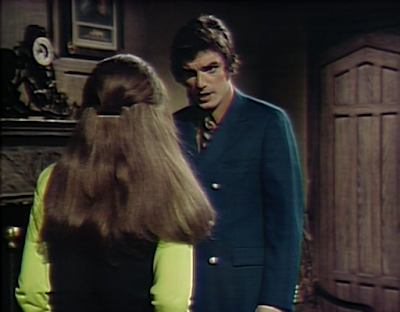 Cyrus tells Chris that he saw Angelique drive by the drug store. He says he called to her but she kept going. Chris tries to explain to him that death is the end. Cyrus points out that people once thought the world was flat, and that the sun revolved around the earth. Chris tells him that he's sure there's an explanation for what he saw. He tells Cyrus that the work he's doing may be impacting his health and mind. Cyrus tells him that man is chemical in his composition, and it could be radically altered. Chris asks him why he would do that. Cyrus adds that man is both good and evil within, and he might be able to separate the two. Chris tells him that he's become obsessed with a private, impractical idea. Cyrus tells Chris that Angelique inspired his experiments. 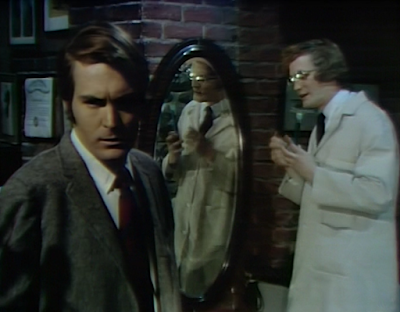 Alexis tells Quentin that she must go, and he tells her that Maggie will be alright, but besides, he makes all the decisions in the house. Julia comes in and is shocked. She thinks Angelique returned, and seemed very happy. She then realizes who it is, and welcomes Alexis. Alexis says that she and Angelique were never as affectionate as sisters should be. Julia asks if she received the letter she sent after Angelique passed, and Alexis says she did not, but she just felt the need to be there. Julia suggests that Alexis stay in Angelique's old room, and Quentin agrees. Julia leads her upstairs. Quentin is troubled by the fact that Alexis, despite being a twin, looks so much like her sister. 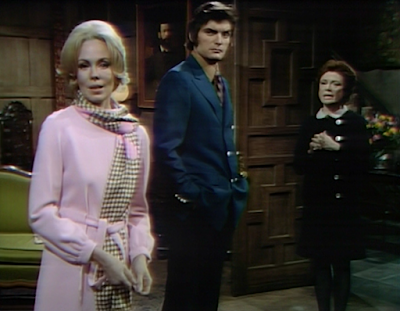 Julia leads Alexis to Angelique's room. Maggie steps out of her room and follows them.

Chris tells Cyrus that he's worried about him. He says he heard Cyrus was reading up on black magic, which he suggests can only lead to trouble. Chris says he has to stop him before it's too late. 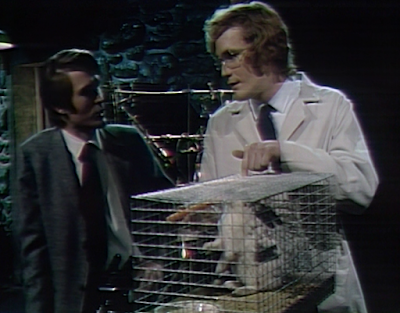 Alexis tells Julia that the room is beautiful. Julia tells her the room is exactly as she left it. She says that she doesn't have to lie to her, and Alexis tells her that she is in fact Angelique's twin sister, and that her sister is dead. She asks Julia for a nightgown. Julia asks which one she would like, and Alexis says she can pick one out, since she hasn't seen any of them before. She tells Julia that she shouldn't suggest to others that she is Angelique. Julia gives her what she describes as Angelique's favorite nightgown, and leaves her alone. Alexis looks up at her sister's portrait. 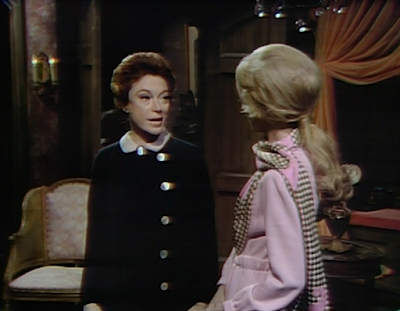 Julia walks by Maggie's room, and tells her that Alexis is staying. Maggie asks by whose orders, and Julia says Mr. Collins' orders. 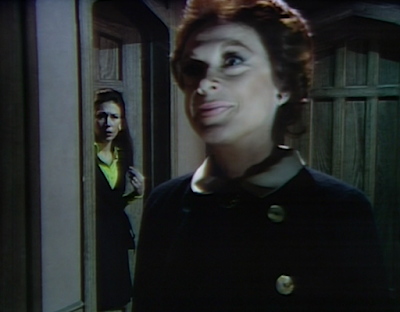 Maggie comes downstairs looking for Quentin. She doesn't find him in the drawing room.

Quentin hears music playing in Angelique's room, and goes in to find Alexis playing the piano. She stops and turns to see him. She apologizes for disturbing him. He tells her that he doesn't mind. She asks if the gown upset him. She says she borrowed it because she left her luggage in town. He tells her that she looks so much like her sister, particularly in this room. Alexis says she misses her sister, too, and perhaps they can comfort one another. She puts her hand on his shoulder, and Quentin sees Maggie, watching them. She runs off, and he follows her. 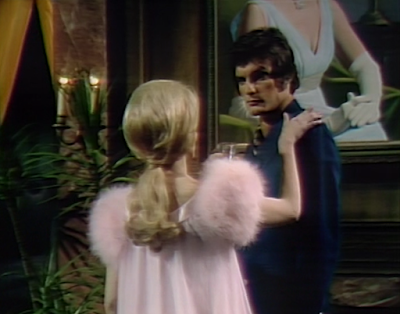 Quentin finds Maggie downstairs, and she asks if he can claim that wasn't Angelique in the room with him. She asks him to explain the note, which she hands to him. He says that was someone's practical joke. He asks why she didn't tell him about it sooner. She says that Will Loomis says that it was in Angelique's handwriting. He chides her for telling a drunk neighbor instead of her husband. She tells him that he's distant even when he's in the room with her. She says that no one in the house makes a move without Angelique's approval. 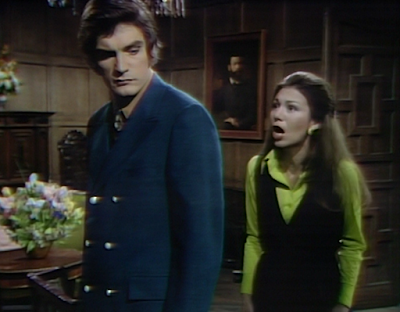 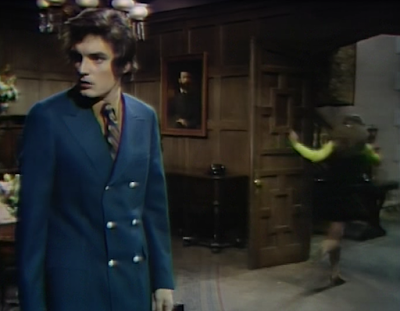 He calls to her and then starts after her. Alexis comes downstairs, and asks what happened. He says that Maggie ran out on him. She suggests that he go after her, and then they hear a car speed off. He tells her that it's too late now. 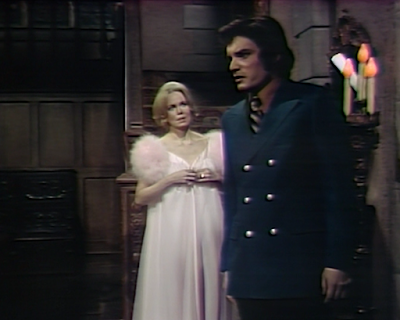 John: Um, how did Quentin know that Maggie ran away when he never saw her outside the drawing room? I do find it amusing that Alexis would come to the house to stay without bringing so much as a nightgown!

Christine: He turned to look when he heard the front door slam. Yes, isn't it odd that Angelexis did not bring a nightgown with her? Is it because she already knew there were plenty of nightgowns waiting for her?

John: So let me get this straight—Jeb is actually Cyrus, aka Dr. Jekyll? Did I miss this earlier, or was that small parallel detail not shared with us. You know that only bad things can happen when someone talks about letting the evil within someone out. 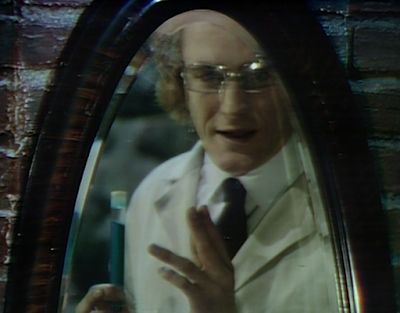 Christine: Except on Dark Shadows, only good things can happen when someone talks about letting their evil freak flag fly. His Jekyll nature was revealed today when he shared his theory on duality, which was reinforced by his doubling in the mirror. Let's hope the cute bunny survives his experimentation. 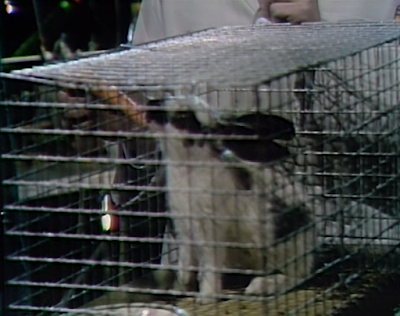 John: Good on you, Maggie! I was not going to be happy if she continued to put up with Quentin's constant verbal abuse. But something tells me that she'll be back. It's not going to be that easy for Alexis/Angelique to take over as the mistress of Collinwood.

Christine: Fun to see that Cyrus is using Julia's chemistry set from her first time developing treatments for Barnabas in Episode 343. 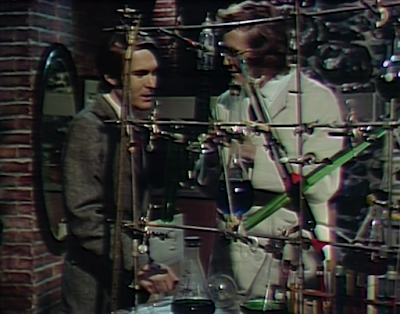 Second Down for the Count:
Barnabas was chained in his coffin 3 episodes ago.
Posted by John Scoleri at 6:00 AM