Bruno comes into Alexis' room and accuses her of being Angelique, back from the dead to avenge her murder. She tells him that he's gone mad. He adds that this is why she brought back Dameon—because she knows how he died, and though his spirit would scare him. She tells him to leave and he says not until he proves what she is—a living dead person! She asks how he plans to prove that and he says that if she's really dead, she can't die again, and begins strangling her. He dares her to use her evil powers now. 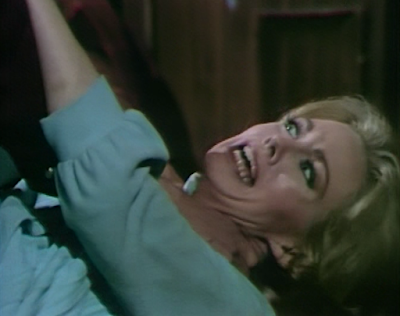 Quentin grabs Bruno and tells him to get out. Bruno runs off, and Quentin consoles Alexis. He says he's going to get rid of Bruno forever. She begs him not to let Bruno come back. 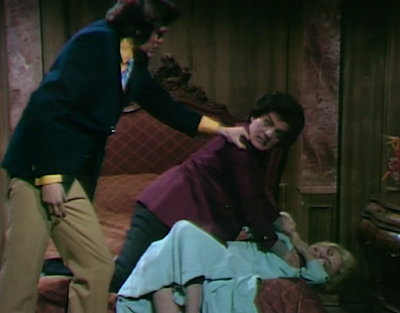 Bruno goes into the drawing room. Quentin follows him in. Bruno says that Quentin wants the spirit of Dameon out, too. He tells Quentin that Angelique vowed that she would come back if anything happened to her. He says Quentin ridiculed her interest in the occult. 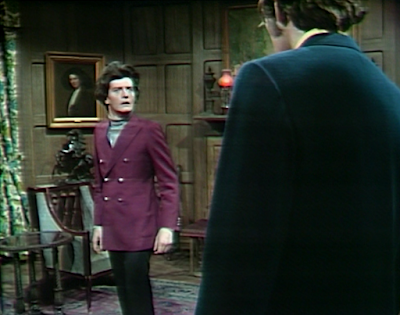 Bruno says Angelique would be jealous of his remarrying, and points out the coincidence of Alexis arriving just when he returned with his new bride. He says that now she needs to get rid of anyone who doesn't believe her lies, by bringing in Dameon Edwards. Bruno points out that Quentin is afraid to find out that Alexis is his dead wife. He says if he's willing to believe the powers of Hannah, then he needs to know Angelique is in the house. He says the house will remain haunted until he forces Angelique back into her grave. 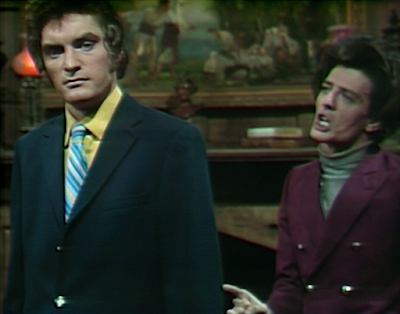 Sabrina tells Cyrus it's just like when Angelique was alive. He was different then, and he's different now. He ignores her. She begs him to listen to her. He tells her that his work must come first. She tells him that he's different, and she can't explain it, she just feels it. She tells him that she's worried about him. He says he's changed because he's growing. He adds that there's something in him growing that he's never had before. 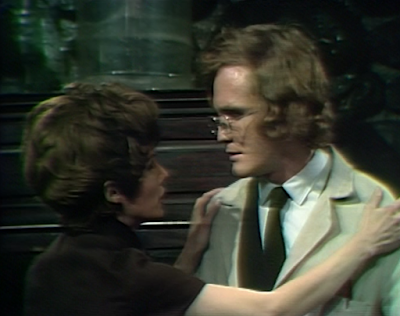 Quentin returns to Alexis' room and finds a note she left for Hannah, asking her to meet her in the gazebo. It's just signed "A." which is how Angelique always did. He pulls out a sample of Angelique's handwriting and determines that they are the same. 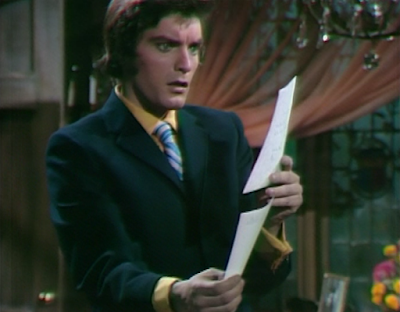 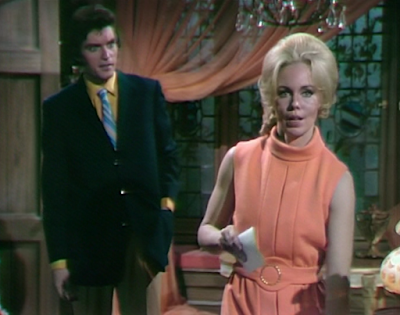 Cyrus is in the lab when Buffie storms past Sabrina to see him. She says it's private, and Sabrina leaves. Buffie dumps out the contents of her purse and takes out the check she got from Yaeger. She asks if he really signed it, and he confirmed that he did. She's surprised, and asked why he did. He explains that his friend John Yaeger did some damage in The Eagle. He says Yaeger lives life to the fullest. Buffie is surprised that Cyrus seems to admire him. He says that John wouldn't hurt anyone. She mentions Steve, and Cyrus says that Steve provoked him. She's surprised Yaeger told him that. She asks if he mentioned her, and says that he moved into the house where she lived. He says that he did, and tells her that he sent Yaeger away. 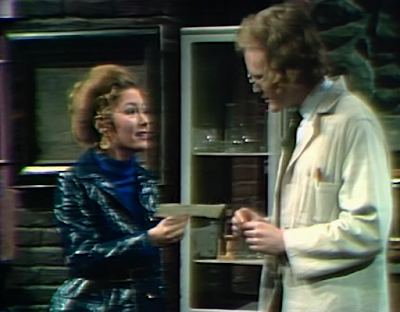 She asks if Yaeger works for him, and he says that he does. He gives her money to cover Steve's hospital expenses. She doesn't know how to react. She says she'll bring it back if Steve doesn't take it. She tells Cyrus that John told her he likes her, but she's afraid of him. He tells her that she needn't be. She says if he came to town with him next time, she wouldn't be afraid. She then adds that he could come on his own. He's a bit flustered, and tells her that his work is demanding. She says she tried, and starts to leave. He asks her if she likes Yaeger, and she replies, "sometimes." After she's gone, Sabrina comes downstairs demanding to know what she wanted. She asks Cyrus again about John Yaeger. The phone rings and Cyrus answers. It's Quentin, saying he needs Cyrus to help him open a tomb. 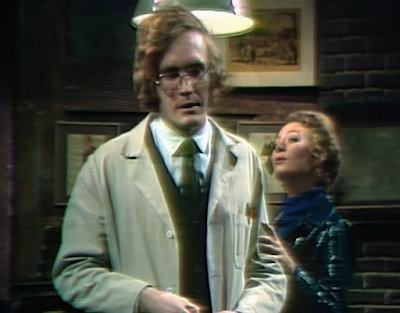 In the drawing room, Cyrus asks Quentin if he really thinks Angelique has risen. Alexis hears them from the foyer. Quentin tells him if they open Angelique's tomb, and the body is not there, then they'll truly know. He says he should have let Bruno open it when he wanted to. Cyrus agrees to help him. 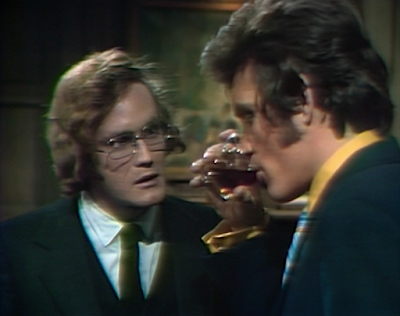 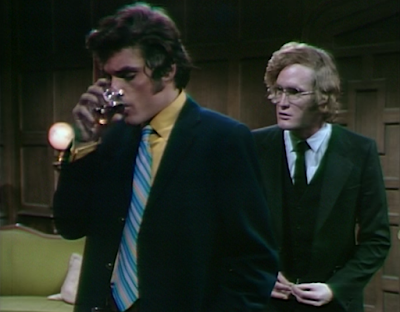 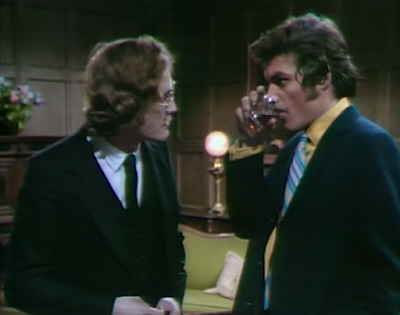 Alexis looks up at the portrait of Angelique. She's troubled. 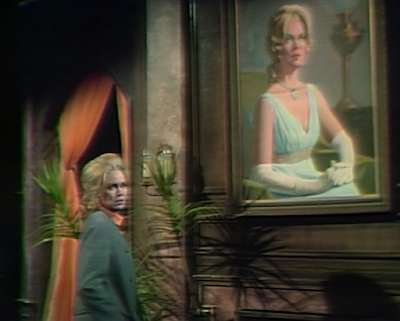 Quentin and Cyrus remove Angelique's coffin from her crypt. Alexis begs him to stop defiling her sister's grave. She tells him if she stops, she'll leave Collinwood forever. He asks her if that will stop what's happening in the house. She tries to stop him, but he opens the coffin. Together, they look down at the contents of the coffin in shock. 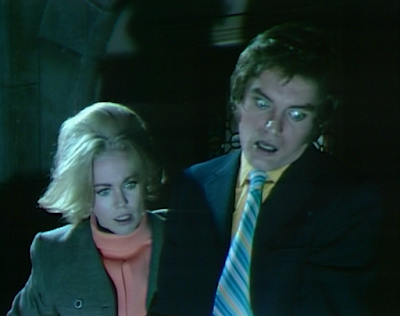 John: Is Bruno's hairstyle getting bigger in every episode? Or is that just my shelter-in-place perception? When he goes down to the drawing room, it seems like his hair is taller than his already long face.

Christine: I bet with a little blow drying and Aqua net you could achieve a Bruno helmet by now. His bouffant is certainly reaching new heights. Perhaps he wanted it to be extra special for the 999th episode. 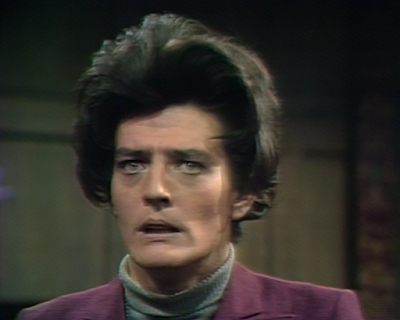 John: And how exactly was Hannah supposed to get the note that 'A.' left for her if it was sitting on the table in Alexis' room? I don't buy her story that she went to get Trask to run an errand after writing the note but NOT sealing it in an envelope. Unless she did it precisely so Quentin would stumble across it... 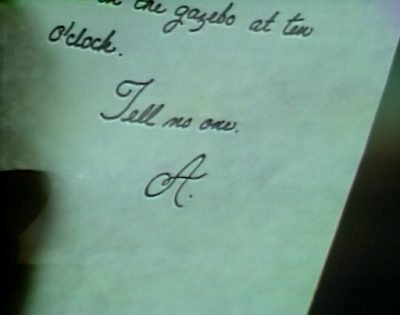 Christine: I was wondering why Angelique wrote just her name on a piece of paper. 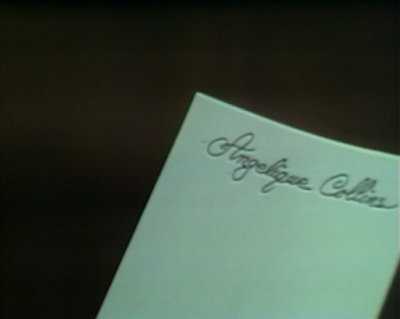 John: Finally, we see who's buried in Angelique's tomb! Wouldn't it be funny if it were Barnabas inside!

Christine: Here I thought you'd be hoping for one of our resident skeletons to make an appearance. Could it be the Wide-Eyed Skull or the Skeletal Bride? Or will we get the standard DS empty coffin?

Second Down for the Count:
Barnabas was chained in his coffin 17 episodes ago. 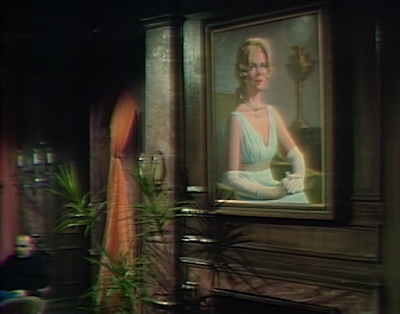 Who is the mystery man taking a lunch break in Angelique's room during the end credits? Perhaps it is one of her many gentlemen callers. Thanks to Paul Haney for pointing him out.
Posted by John Scoleri at 6:00 AM

I thought Quentin was a little nonchalant about pulling Bruno off of Alexis. Perhaps he didn't mind her getting choked out a bit longer.

It seems like Cyrus really doesn't have a solid plan in place. He's just kind of making it up as he goes along and will most likely be found out sooner rather than later.

By the way, who was that sitting in the chair and eating during the end credits today?

That is a good question, Paul! I don't know how I missed that guy, but apparently the camera operator missed him too. It was funny that once he did notice he was in the shot, the camera slowly zoomed in on the portrait to exclude him from the frame. I suppose it would be a nice place to enjoy a meal. I have added a screenshot of him to the post.