Quentin wonders what it all means. A window opens and he shuts it. He feels someone coming, and then hears Angelique's song. He calls to Angelique begging her to appear to him. 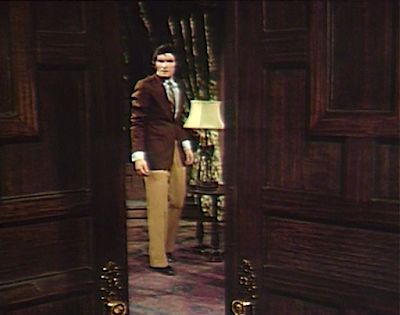 He starts upstairs, but then returns to the drawing room, where he sees Dameon Edwards sitting in a chair. Quentin goes to him and when he touches him, he falls out of the chair. Quentin picks up the phone to call an ambulance, but looks back and the body is gone. He looks around for it, but it's not there. 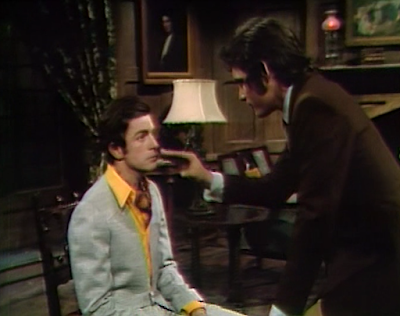 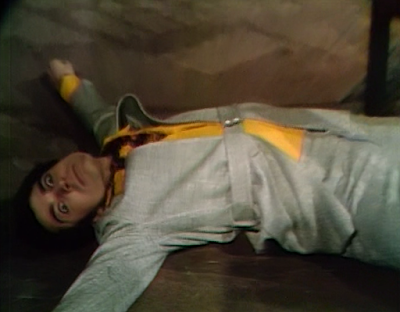 Time passes. Quentin comes downstairs and hears something in the drawing room. He finds Trask in the room rearranging furniture. He asks what he's doing, and Trask tells him that he just arrived, and had wired Julia to say he would be back this evening. Quentin explains that Julia will be gone for a while. Trask tells Quentin that explains why the furniture was arranged in a way other than how Angelique would have liked it. Quentin says he sent Julia away to visit friends. Trask apologizes for being away in a time of need. He asks what has been so unsettling. Quentin asks Trask if he remembers Dameon Edwards, who disappeared. Trask says they haven't seen him in a year or so. Quentin asks if Trask knows what happened to him, and he says he doesn't. 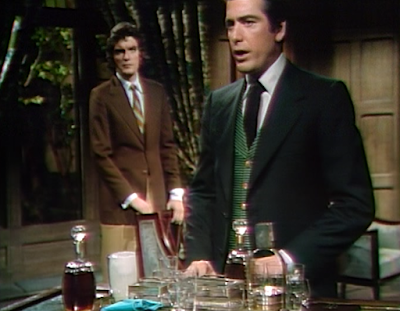 Amy is looking on the floor when she sees Dameon Edwards. She says she's looking for a stone that fell out of her ring, and asks him to help her find it. He doesn't say anything. Amy fills him in on everything that has happened in Collinwood since Angelique's death, and the next thing she knows, he's gone. 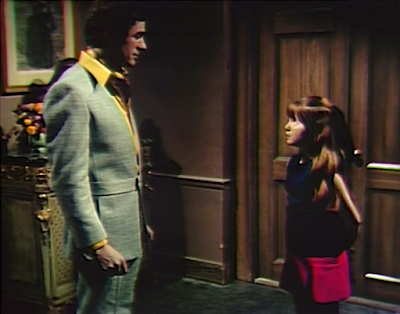 Trask asks about Maggie leaving within a week of arriving. Quentin says she'll be back. He tells Trask not to mention to Alexis that she looks like her sister. Amy comes in, and Trask says hello to her. She asks Quentin if he has seen Mr. Edwards. She says she saw him upstairs, and then he disappeared. Trask breaks a glass in his hand. Quentin asks Amy where she saw Edwards. She says she was in the hall near Alexis' room. She says he wouldn't talk to her, and then he was gone. He tells her to wait with Trask. Quentin goes looking for him, and Trask asks Amy is she's sure it was Dameon that she saw. She says she is, and he points out that he wasn't expecting to see him. 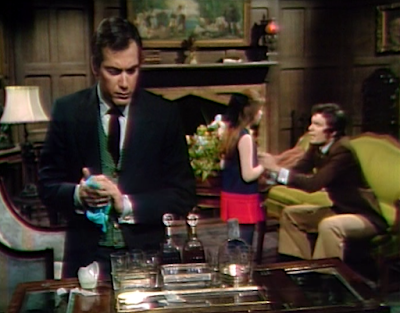 Quentin searches upstairs for Edwards. He goes into Angelique's room and finds Dameon standing there. He asks why he came back, and Dameon disappears. Quentin sees blood on the floor. He tries to make sense of things. 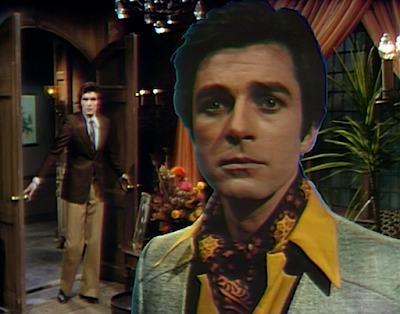 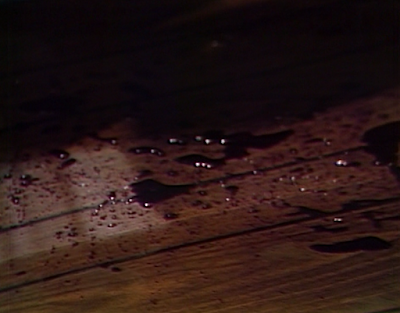 Trask asks Amy if Alexis looks like her sister. Amy says she's scared. Quentin comes in and he tells her he's decided to let her stay at the old house with Carolyn and Will. She asks him if something's wrong. He assures her that nothing is wrong, and sends her upstairs to pack. After she goes, he asks Trask to help her, but first he tells him that he saw Dameon Edwards twice that night, and both times he vanished. 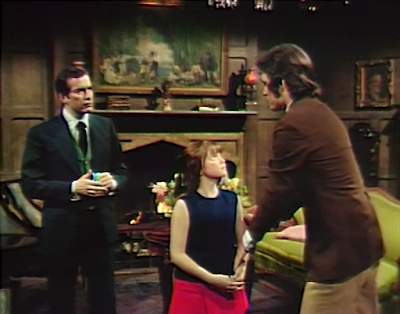 Bruno plays Angelique's song on his piano when Quentin comes to see him. He says he saw an old friend of his tonight—Dameon Edwards. 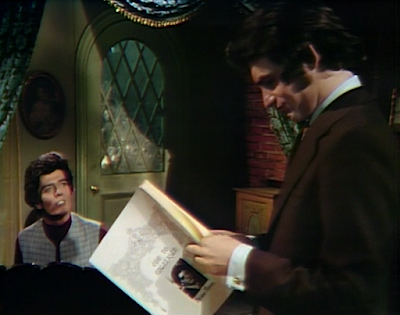 Bruno seems shocked, and then says he hopes he gave him his regards. Bruno asks if he said where he's been for the last year. Quentin says he's less talkative than before, because he's dead. He claims Bruno knew he was dead. Bruno denies it, saying that all he knows is Dameon stopped coming by the place a year ago. Quentin tells him that Dameon's spirit is trying to tell them something very important. Bruno wishes him luck, and excuses him. Quentin tells him that he can play the fool, but he can't change the look on his face when he told him he saw Dameon. 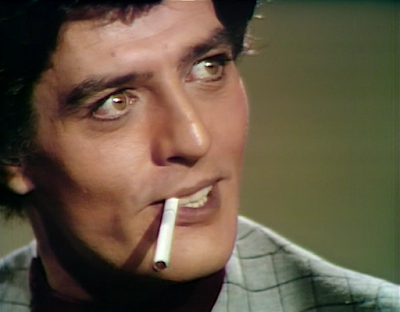 Trask and Amy come downstairs with her luggage. He tells her to wait in the drawing room while he gets the car. She goes to the window and shuts it. She turns and sees Mr. Edwards in the room with her. He doesn't say anything, but beckons her to follow him. She does, and he leads her towards the kitchen. She follows him. 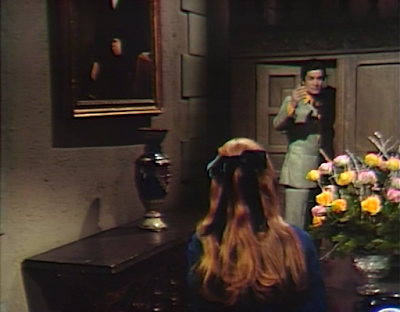 Quentin returns to Collinwood and sees Amy's suitcase, but not her. Trask comes downstairs, and Quentin asks where Amy is. Trask says she's in the drawing room, and Quentin says she's not. He sends Trask to look for her upstairs while he looks for her downstairs.

Dameon leads Amy down into the basement. 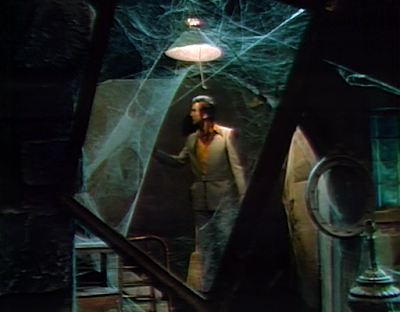 Trask comes downstairs and tells Quentin he can't find her. Quentin tells him that he told Trask not to leave her alone.

Dameon waves for Amy to follow him, and he walks through a wall. She screams. 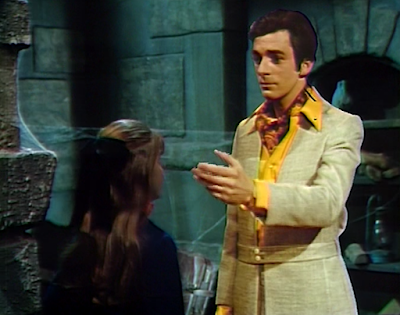 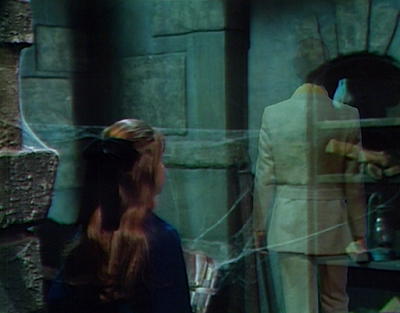 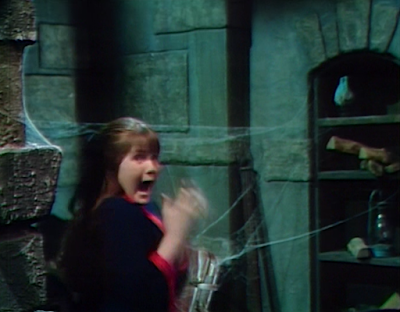 John: Who the hell is Dameon Edwards? I don't know if we've ever seen him before under another name, but he's sure one sharp-dressed ghost. Of course, if he was a friend of Bruno's, he's probably not a very nice guy.

Christine: You must remember good ol' Dameon Edwards! Nobody has seen him in a year. And since we haven't been in parallel time for a year, none of us the rest of us have any idea who he is, but if he died in that mustard yellow shirt, we should pity the poor fellow. 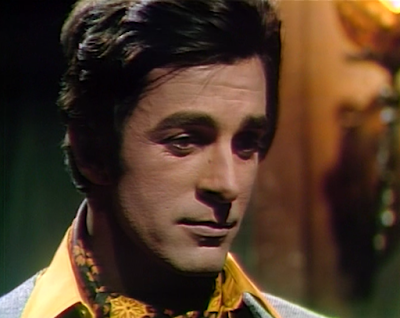 John: Who could have imagined a Trask as a servant! I thought it was amusing that he broke a glass in his bare hand and no one noticed. I guess we'll see what he's like over time, but he's already set a Trask record of being a seemingly nice guy for one whole episode! This truly is parallel time! 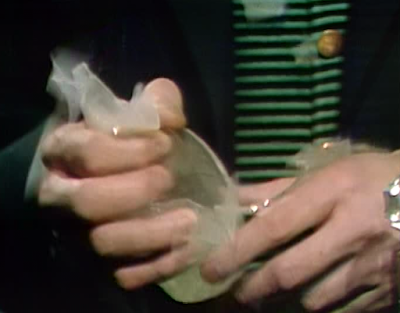 Christine: I love it! Trask as a manservant at Collinwood is rife with possibilities! I wonder if the lack of reaction to the broken glass suggests that Mr. Trask is often prone to crushing the glassware. He seems a rather suspicious character to me, the way he started fussing with the cocktail glasses on the pop-up bar when Quentin asked him about Dameon Edwards. Could it be he has some awareness of the events that led to him becoming a ghost? Incidentally, I'm quite sure that's the same glass Cyrus used to drink his potion in Episode 988. 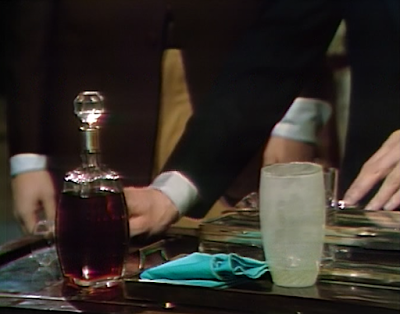 John: It seems like it's been years since we've been down in the basement. While it turned out that Paul Stoddard wasn't buried down there after all, wouldn't it be exciting to find out that in parallel time, Dameon Edwards is buried there!

Christine: It could be that Liz was never led to believe Paul was buried in the basement in parallel time. Perhaps they even stayed married a bit longer than they did in the original time. By the way, why is it that characters on TV are always sticking their fingers in blood? If I found what appeared to be blood on a surface, the last thing I would do would be to dip my fingers into it. 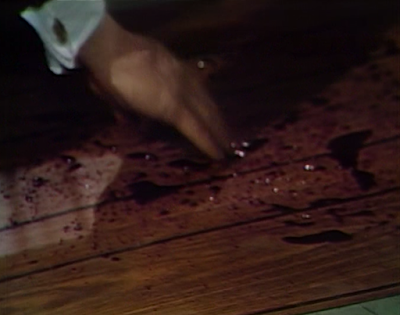 Second Down for the Count:
Barnabas was chained in his coffin 12 episodes ago.