Quentin comes into Angelique's room, where Alexis is playing the piano with tears streaming down her face. He asks her what's wrong, and she says it might be the music, or it might just be the room. He tells her that he understands, and then leans in to kiss her. She pulls away, and he apologizes, saying he doesn't know what came over him. She says that he thought she was Angelique, just like everyone else. She says Julia, Amy, and Bruno all think so. He asks when Bruno was there, and she says he came by earlier in the day to see if she was real. She says that if he comes back, she won't be there. 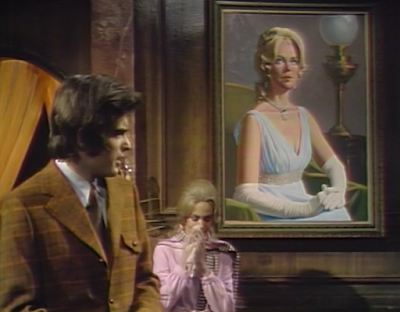 She says that she thought Quentin, of all people, knew who she really was. He says he does, and asks her to stay. She says that if she leaves, perhaps Maggie will come back. He tells her that he got a telegram from Maggie saying that she plans to think things through before deciding anything. Alexis says that with her gone, the decision might be easier. Quentin tells her that she must stay; that it would mean a lot to Daniel. He gives her his word that he won't make another pass at her, and he'll talk to Bruno. He promises that Bruno will no longer bother her. She agrees to stay. 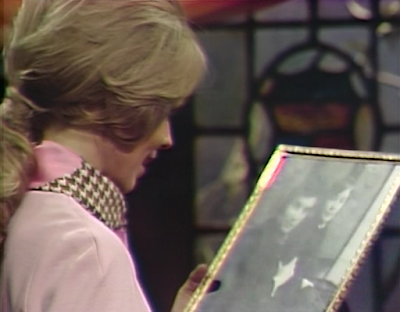 Bruno is in Cyrus' lab, making moves on his assistant Sabrina. Cyrus comes downstairs and tells Sabrina to go upstairs to await a delivery. 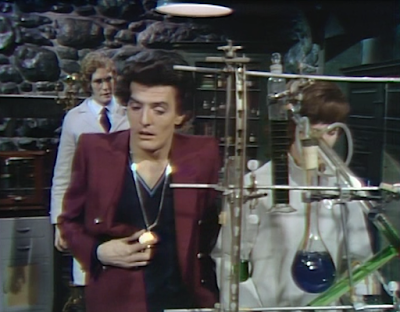 She goes upstairs, and Bruno says he doesn't understand Cyrus. He asks him if he cares about Sabrina, and if so, how come he wasn't upset to see him putting his moves on her. Cyrus says he knows all about Bruno, which is why he's using him for his experiment. He draws some blood from him. Bruno tells Cyrus that he and Sabrina are very much alike. 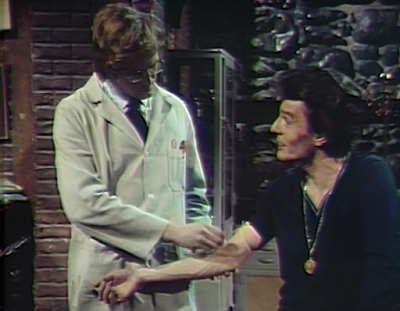 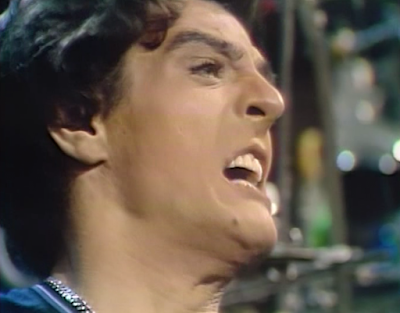 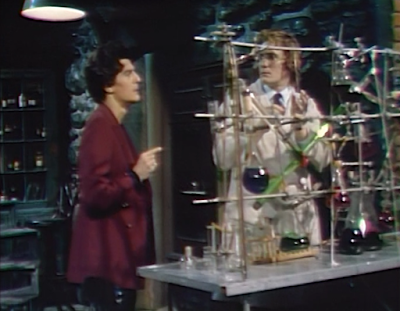 Sabrina comes downstairs and says the delivery person wants to see him. A man follows her downstairs and introduces himself as Horace Gladstone. Cyrus excuses Bruno and Sabrina. Bruno leaves, and he locks the door behind him. He then sends Sabrina upstairs. Cyrus says he didn't need to deliver the order by hand, and Gladstone says he wanted to meet the man who wanted these specific materials. He says the inclusion of it in Cyrus' work aroused his curiosity. Cyrus says he doesn't discuss his work with anyone, and thanks him. Gladstone warns him that he is no longer so active because he felt he was drawing closer to truth better left unknown, and leaves. 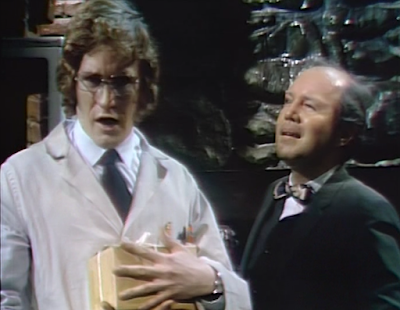 Bruno asks someone on the phone for detail about whether Alexis was on a ship that arrived last week, and finds there was no such ship. He suddenly begins choking. 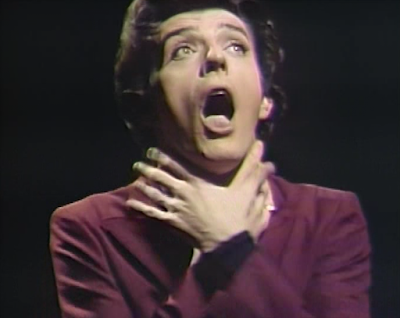 Bruno runs into Angelique's room and begs her to remove the pins from the doll to stop the pain. She tells him that he's mad, and he can suddenly breathe again. He tells her that no ships arrived in New York from Genoa in the past week, and asks her why she lied. 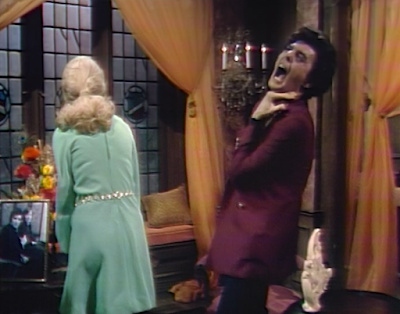 She asks if he considered that she sailed with wealthy friends on a private yacht. She asks if he'll leave, or if she has to call someone. He says he'll leave, but asks why she doesn't want him to know the truth. She screams at him to leave her alone, and he leaves. 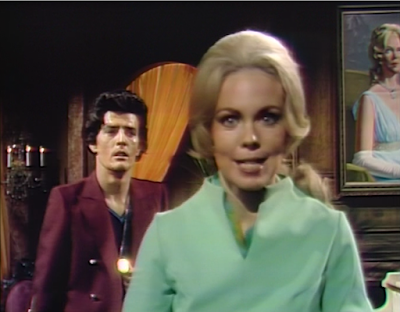 Sabrina points out that Cyrus is so secret with his notes. She finds a ring on the table, and he tells her that he put it there for her to find it. She points out that it's an engagement ring, and hugs him. He points out that she knows his work, and his work habits. She says she understands his devotion to his work, and that it's one of the things she likes about him. She kisses him, and starts to say something before stopping. 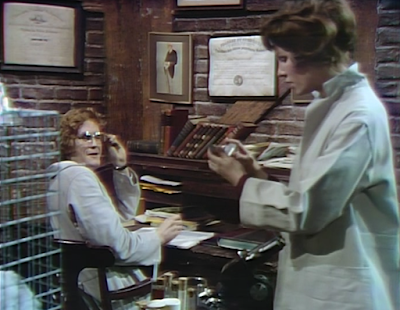 He asks her what it is, and she brings up his new experiment. She then stops and says he has the right to work on anything he chooses. He asks her if there are any limits—as if her were to do something evil, or harmful to mankind. She says she can't imagine him doing such a thing. She asks if he's talking about his new experiment, and he tells her that he'll never find good or evil in a test tube. 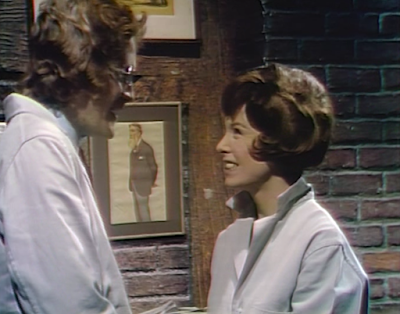 Bruno arrives at the cemetery, looking for Angelique. He goes into the Collins's crypt and begins to hammer at the cover to Angelique's burial tomb. 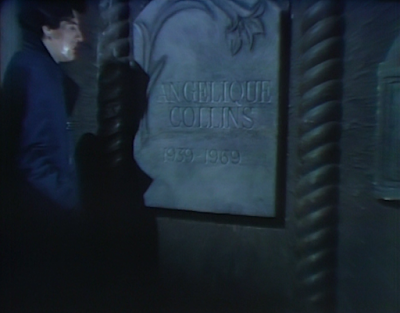 John: When Quentin tells Alexis that he knows she isn't Angelique, is he admitting that he kissed her on purpose? Clearly Maggie will be troubled if Alexis becomes a permanent fixture in Collinwood. What possible reason could Quentin have for wanting Alexis to stay?

Christine: Do you really have to ask or was that a rhetorical question?

John: We're all aware that Bruno is not a very nice guy, and therefore a pivotal part of Cyrus' experiment into evil. But what sort of chemicals are so specifically tied to evil that Horace Gladstone felt the need to deliver them personally?

Christine: Speaking of chemicals, do you think it's safe for Bruno to be smoking in Cyrus' lab? Bruno is a total sleaze bomb, but it was nice the way Cyrus got him back for hitting on his gal pal with a good needle jab to the arm. I also like how they made sure to include the bunny in the laboratory shot today. I think that bunny is also going to be a pivotal part of the experiment. 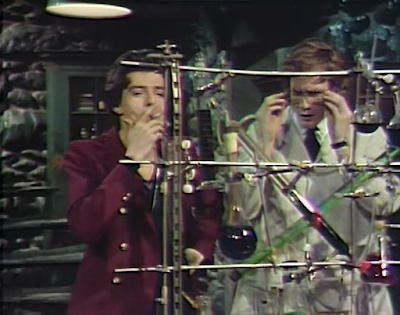 John: Bruno offers an interesting data point on Angelique. It sounds like she's got a history with voodoo dolls. I do wish we got to see him struggling with the pain all the way up to the East Wing bedroom...

Christine: That was some impressive choke acting! If Alexis wasn't the cause of the choking, then surely her sister is still running around somewhere, since making people choke is her modus operandi. If Mr. Gladstone seems familiar, it's because we last saw him appear as Strak, before that he was the Ghost of Garth Blackwood, and he first appeared as Lt. Costa way back in Episode 174. Did you notice the gravestones of parallel Thomas Findley and John Hart today? It would be cool if Cyrus raised up some parallel zombies. 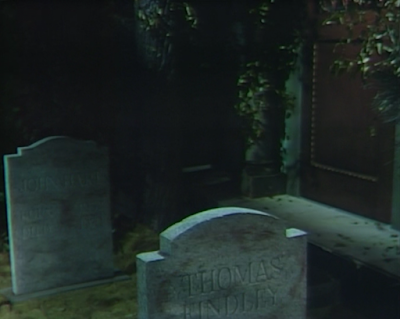 Second Down for the Count:
Barnabas was chained in his coffin 5 episodes ago. 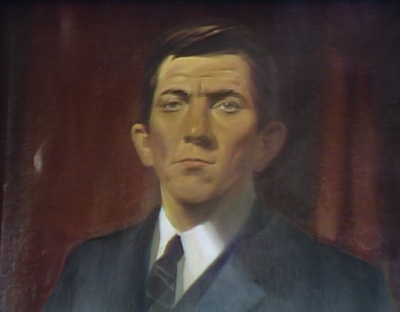 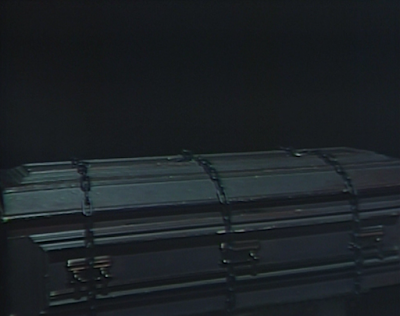