Buffie explains to Quentin that a man came in and started a fight. She explains how the man made a mess and then returned with a check signed by Cyrus. Quentin thanks her, and bids her goodnight. After he leaves, Yaeger enters and reminds her that she wasn't supposed to mention where the check came from. 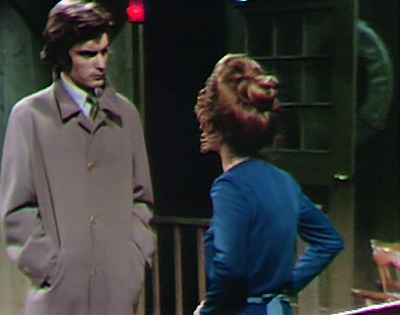 He says he'll have to teach her, and begins choking her. She screams. He asks why she he should let go of her. He does, and then holds her arm behind her back to teach her a lesson. He lets her go, and he tells her that her tears are pretty. She says he's insane. He assures her that he's not, but that he is able to get what he wants from people. He says he wants to give her the finest things. He tells her that he'll give her anything. She says he doesn't know her at all. He says he's not angry that she's fighting him. She tells him to leave and never come back. He says he'll be back, and she won't be able to wait to see him. 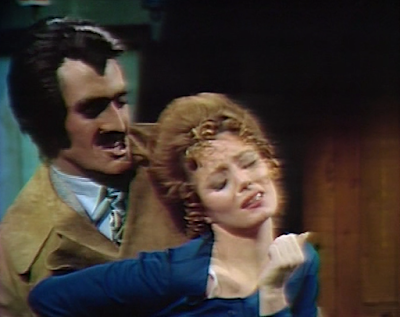 Quentin asks Sabrina when Cyrus left. She explains it was a few days ago. He says that he saw a check Cyrus wrote yesterday. He gave it to a man who used it in payment at the Eagle. She says she balanced his checkbook yesterday, and notices that two checks are missing. She says that last week she saw an IOU made out to Cyrus by John Yaeger, and old friend who only came to see him when he needed money. She wonders if something has happened to Cyrus. She says he didn't call her last night, and Yaeger must have taken him somewhere. 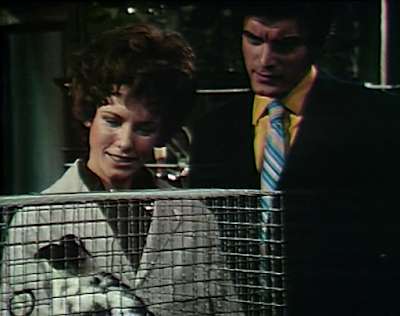 Buffie is in her apartment when someone tries the door. It's Mrs. Duvall, her landlord there for the rent. She gives it to her, and says she has to go to work. Her landlord thanks her, saying she's getting more money for the four unfurnished rooms than ever before, and it's all thanks to her. Buffie doesn't understand what she's saying. Yaeger comes in and tells her that he's the new renter. 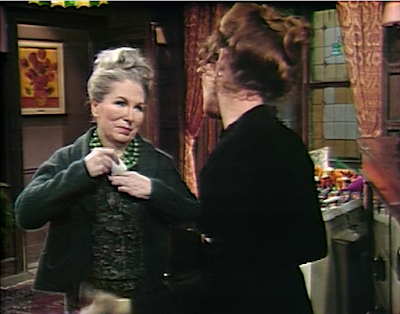 He takes a painting off the wall and says it's ugly. Buffie says that it's hers. She then asks Mrs. Duvall for her rent check back. Yaeger asks Mrs. Duvall to run up to his rooms and clean them. She leaves, and Buffie tries to leave. Yaeger grabs Buffie and sits her down. He says she wants excitement. She doesn't understand him. 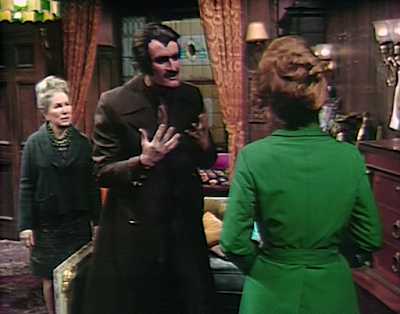 The phone rings and she answers it. It's Quentin. She says she can't talk now, and will call him back later. He asks her if she's seen the man from last night, and she says she hopes she never sees him again. Quentin says he's worried about Cyrus. She says that she can't help him and hangs up. She tells Yaeger that she hates him, and he tells her that she won't feel that way for long. 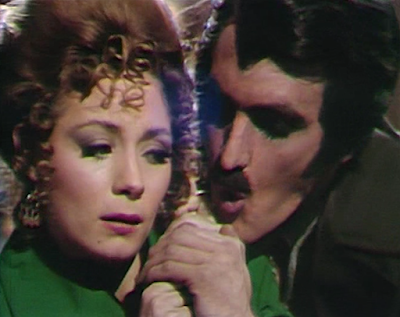 Sabrina tells Quentin that she would know if he was staying someplace new, and she confirmed he didn't arrange to stay in his normal place. Quentin says at least two people know where he is, and he'll find at least one of them. 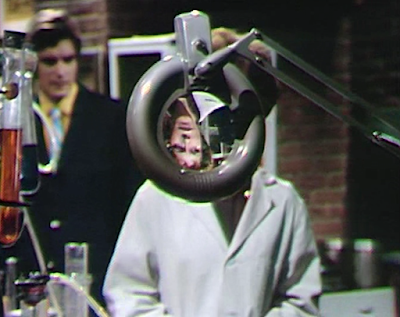 Steve, the guy from the Eagle, goes to Buffie's and finds her packing. She says she has $13 to her name, and can't really go anywhere. He asks if the guy from the bar has been bothering her again. She tells him to stay away from her, and not to get beat up for her anymore. He reluctantly leaves. 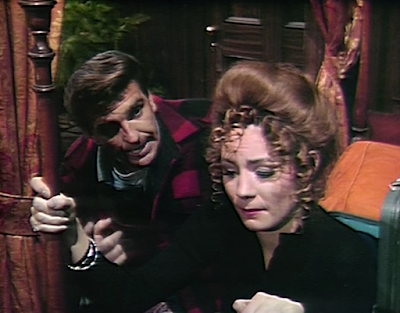 Steve leaves the house, and Yaeger comes out of the shadows and follows him.

Steve is on the docks when Yaeger confronts him. He extends the knife in his cane, but Steve knocks it away. They fight, and Yaeger overtakes him. Steve calls for help, and they hear the whistle of a constable in the distance. 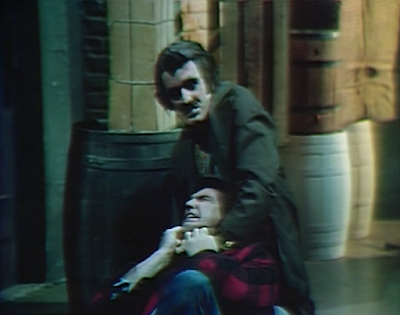 Quentin tells Buffie that he knows she saw Yaeger again. She denies it at first, but then admits it. Quentin says he's convinced he kidnapped Cyrus. She says he couldn't have, or he wouldn't be bothering her like he does. 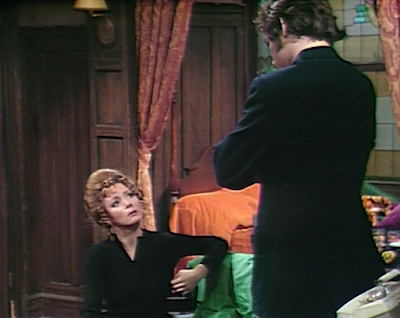 Sabrina closes up the lab and goes upstairs. Whistles are heard outside, and Yaeger enters. He says he needs the antidote to be Cyrus again before the police arrive. Quentin comes in and introduces himself to Yaeger, who is opening the safe. He asks him where Cyrus is, and what he's done with him. Yaeger says that Cyrus can explain everything. Quentin doesn't believe him, and asks where Cyrus is. He says he's going to keep asking until he has an answer, or until Cyrus walks down the stairs. 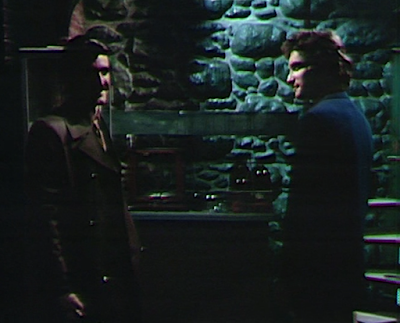 John: I doubt that the writers have thought of one yet, but I'm curious about Buffie's background, and what led to her leaving the Collins' employ. We know that in the other side of parallel time, Quentin and Beth were canoodling... so it doesn't seem like too much of a stretch to imagine a past illicit relationship between parallel-Quentin and Buffie.

Christine: They do seem to have more than a passing familiarity with one another. Afghan watchers should note its appearance on Buffie's bed in this episode.

John: Why exactly did Buffie ask for her rent check back? Was she planning to skip town rather than stay in the house with Yaeger? And wouldn't Yaeger taking up residence suggest that he's planning on taking on the gig full time, and retiring Cyrus Longworth?

Christine: I tend to think he's setting up his own place to avoid having to explain to anyone why he is hanging out at the lab during Yaeger time while Cyrus is absent, and also so he can be closer to Buffie in order to abuse her more frequently. While he may be able to keep himself going on the "Do Not Touch" potion for some time, eventually it will run out and he will need Cyrus to make him more, assuming he needs to keep taking it to retain his current persona.

John: So with the police hot on his tail, it sure seems like Yaeger only has a few options: let Quentin in on his secret, or take him out.

Christine: It's possible he could knock him out, swill some potion, and be back to being Cyrus before Quentin returns to consciousness. I have not seen Dan Curtis' The Strange Case of Dr. Jekyll and Mr. Hyde, which was a made for TV movie released two years before the story made its way to Dark Shadows, but this may be a good time to check it out. It is streaming on Prime for anyone else who'd like to see how it compares.


Second Down for the Count:
Barnabas was chained in his coffin 15 episodes ago. 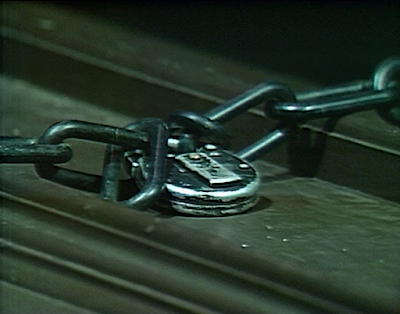