Elizabeth finds Maggie in the drawing room, and asks if she's ready to see the children. Maggie asks if Quentin is around, suggesting that she'd like him to be with her when she does. Elizabeth suggests otherwise. 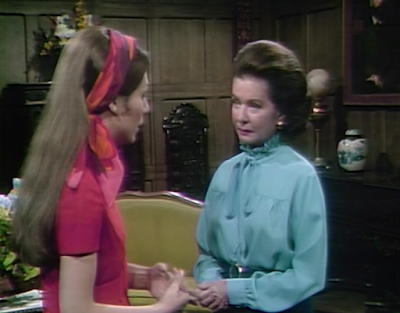 Amy tells Daniel she's glad he agreed to meet his stepmother, and he tells her that he's going to do everything he can to driver her out of the house, and attempts to break his comb, but fails. Amy says she must be nice, and Daniel says his father still misses his mother, and his new wife will never be his friend. 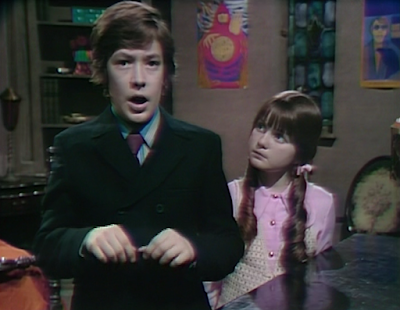 Maggie is nervous about meeting the kids when Quentin comes in. She says she doesn't want to disappoint them. Quentin says that only Daniel needs to make an adjustment. He starts upstairs when Chris comes in. Quentin introduces him to Maggie as his cousin, lawyer, and the manager of the Collins estate. Chris asks Quentin if he has a minute. Chris tells him that Bruno has come back. Elizabeth goes to get the kids, and Quentin excuses himself and Chris. 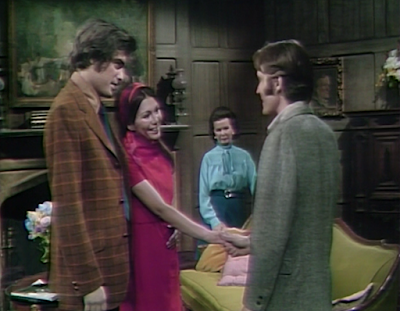 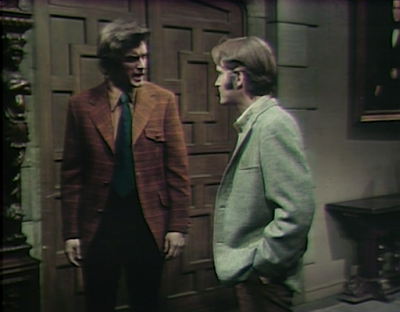 Chris comes back into the drawing room and offers to show Maggie around the estate. She thanks him for his kindness. She says she wants to make Quentin as happy as his first wife did. Chris tells her that Angelique became a legend in her own time. 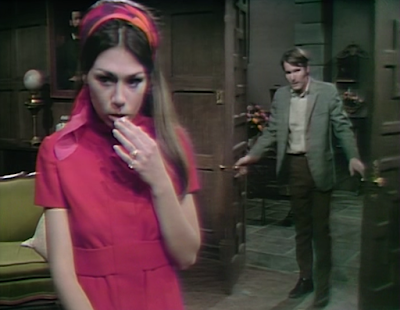 Elizabeth comes into Daniel's room and invites him downstairs to meet his stepmother. Amy encourages him, and Elizabeth tells them both to join her. 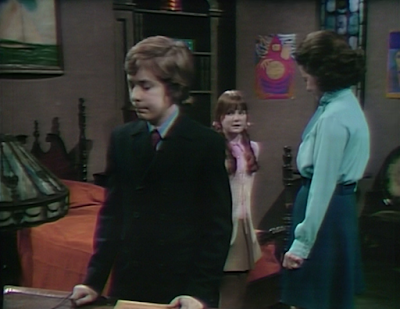 Quentin apologizes to Maggie for losing his temper over Bruno when Elizabeth brings the kids in. Quentin introduces his son Daniel and cousin Amy to Maggie. She tells the kids that they can call her Maggie. Daniel scowls as Quentin leaves the kids with her. 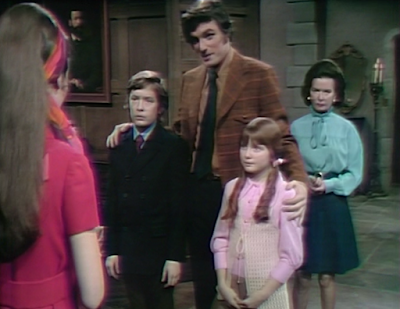 In the foyer, Quentin says he'll either like her or not. Elizabeth says she doesn't envy anyone who has to follow in Angelique's footsteps. Quentin tells her that he'll be in his study. 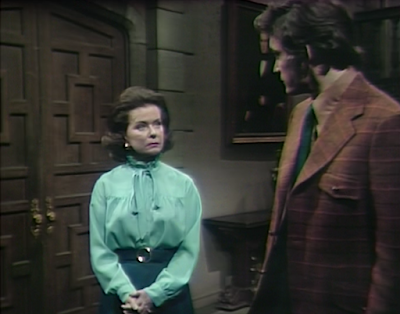 Daniel works on a puzzle while Amy talks to Maggie. Maggie gets up and tells Daniel that she's counting on him to help her find her way around Collinwood. He asks if she met Amy's brother Chris, and says it's his job to show her around Collinwood. Daniel asks if she has met the gardener. He says that every day at noon his mother met with the gardener. Maggie says she knows a little bit about landscaping. Daniel and Amy go upstairs, leaving Maggie alone in the drawing room. 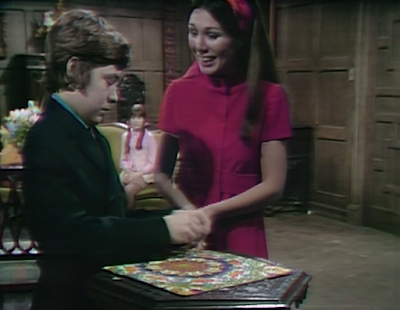 In the foyer, Elizabeth tells Daniel that he must be proud of his performance. Elizabeth goes into the drawing room and explains to Maggie that it will take time. Elizabeth tries to explain that Daniel hasn't accepted his mother's death. Maggie says that she must have been beautiful, and Elizabeth concedes that she was. 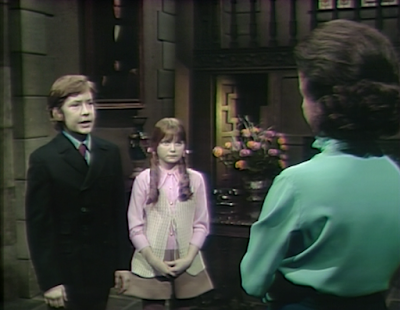 Amy and Daniel go into Angelique's room. He says it's the only place in the house where no one can hear them talk, and he's got a plan to get rid of Maggie. He twists Amy's arm (literally) and she agrees to help him. 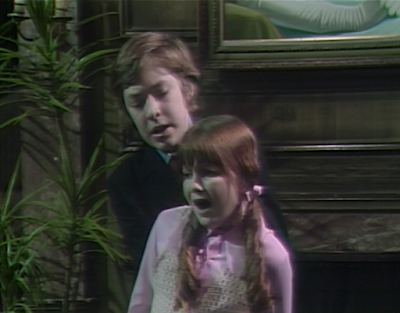 Quentin asks Maggie why she thinks she's a failure, He says that Daniel will come around.

In a secret path, Daniel tells Amy to stand by a wall and hum a tune when she hears him say, "Mother please sing to me again" 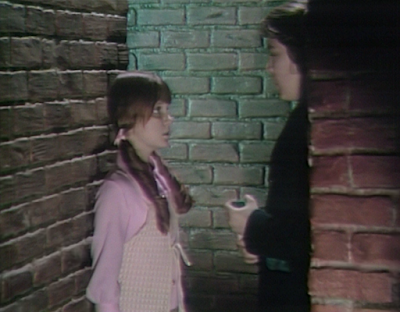 Maggie is pacing around the drawing room when Daniel returns. He says he was looking for his father. She invites him to sit down and talk with her. He hears the clock chime, and then says he knows where his father is—in his mother's room. He describes how he stares at her portrait, sometimes talking to her. 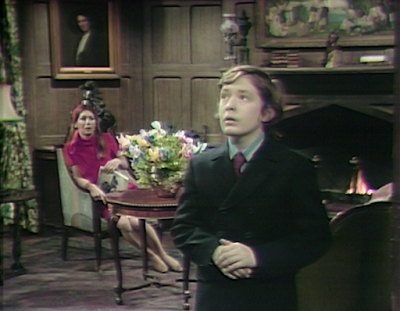 She asks why Daniel is trying to upset her. She says she wants them to be friends. He tells her that she can go see for herself if she wants. 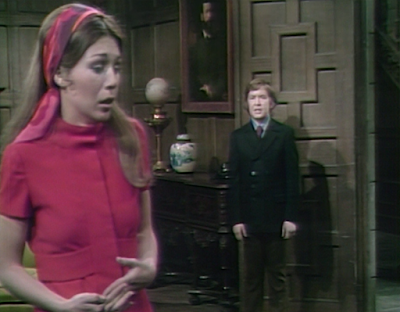 Maggie runs upstairs as Amy and Daniel come into the foyer. Elizabeth comes in and asks what they're whispering about. Daniel says they were just playing a game. 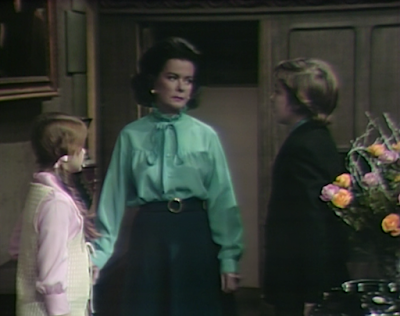 In the East Wing, Maggie goes into Angelique's room looking for Quentin. The room is empty. She sees the photo of Quentin and Daniel. She stares up at the portrait of Angelique as Daniel sneaks into the room. She says his father isn't in the room, and she doesn't think he was. She says she wishes she could make Daniel understand. He asks if she wants him to understand that she's dead, and tells Maggie that she's coming back. He looks up at the portrait and asks his mother to tell Maggie that she's wrong. He asks her to sing to him again, and they hear a woman humming a lullaby. Maggie says it's a trick. Daniel says that it's not, and that his mother never left. Maggie runs out of the room and Daniel laughs. 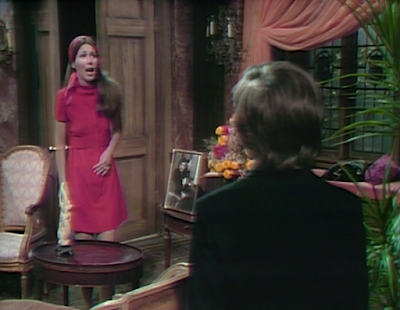 Amy comes in and he tells her she did a wonderful job. She says she never made it to the secret room to do what he asked, and he asks if she's joking. He says they heard her humming, and she says it wasn't her. He wonders whose voice they heard. 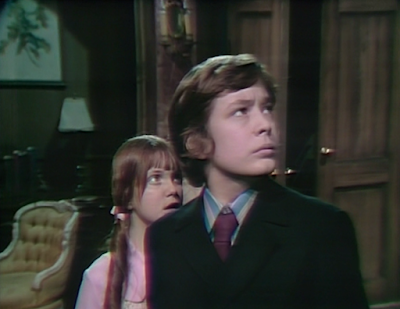 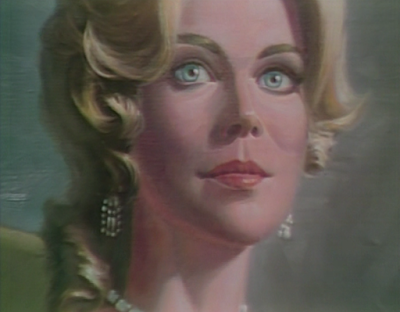 John: The music that plays over Daniel's failed attempt to break his comb makes the scene more comedic! You'd think they would have tried breaking a comb in rehearsals! 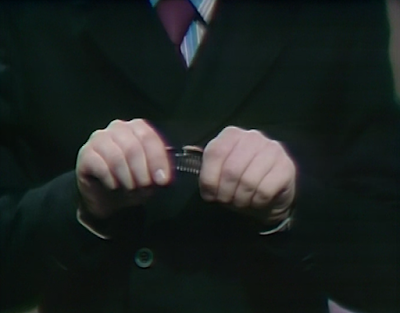 Christine: The props department should have made sure he didn't have an unbreakable comb. It's interesting that Daniel has the same Cream posters in his room that David has.

John: Is it me, or is this deja vu all over again? Are we in for several months of children tormenting stepmothers?

Christine: It may be slightly different this time around since there's a housekeeper who is also participating in tormenting her. For me, the sense of deja vu comes from having seen the 1940 Hitchcock film, Rebecca.

John: The voice we heard clearly wasn't Amy's so I'm not sure why Daniel was so surprised when Amy confirmed that it wasn't her. But it also clearly wasn't Angelique's voice... so we can only wonder who was actually responsible for it.

Christine: I'd expect it to be one of the actresses in today's episode. I initially thought it may be a recording of KLS, since she has past experience portraying a ghost, but after going back and listening to it again, I believe it's Joan Bennett. I would be pleasantly surprised if it actually was Elizabeth joining in to help gaslight Maggie. We shall see.


Second Down for the Count:
Barnabas was chained in his coffin 1 episode ago. 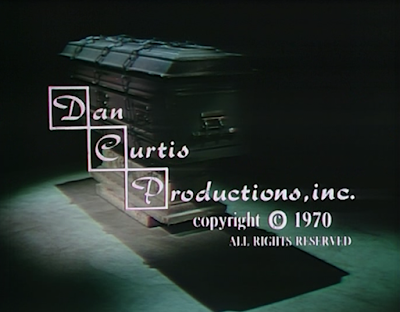