Quentin calls to Maggie and then starts after her. Alexis comes downstairs, and asks what happened. He says that Maggie ran out on him like a child. She suggests that he go after her, and then they hear a car speed off. He tells her that it's too late now. 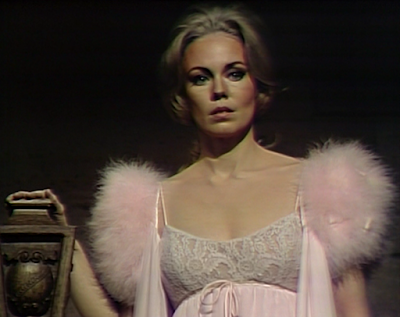 Alexis can't believe Maggie would leave because of her. Quentin reminds her that their resemblance is striking. Alexis says that everything came easily for Angelique, but not so for her. Quentin says he knows how extraordinary she was. Alexis asks him if he should go to find Maggie, and he tells her that he doesn't want to talk about it. Quentin says he'll arrange a car for her in the morning so that she can go see her father. She tells him that's the last thing she wants to do, but she thanks him for the offer. 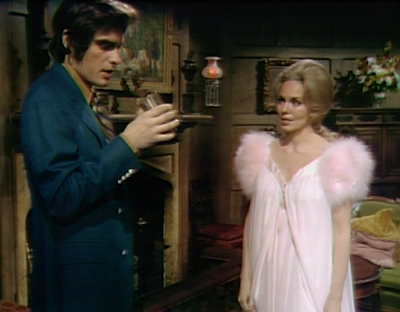 In the foyer, Amy screams when she sees Alexis, thinking that she's seeing a ghost. Quentin tells her to come downstairs and meet Alexis. Amy tells Quentin that she's Angelique. He explains that Alexis is Angelique's twin sister. Alexis apologizes for frightening her, and heads upstairs. Amy says that Daniel said she'd come back, but she didn't believe it. Amy asks if Maggie left, and Quentin confirms that she did. Amy begs Quentin to bring Maggie back. He tells her to go upstairs to bed, and she does as she's told. Quentin is adamant that he will not go after Maggie. 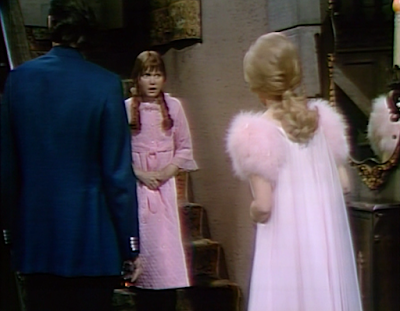 Quentin calls Maggie, and speaks to her sister Jennifer. He says he insists on talking to her. He offers to come to New York, and then asks Jennifer what Maggie wants him to do. He asks her to tell Maggie that he loves her, and then confirms that Alexis is there, and will stay until she meets Daniel. 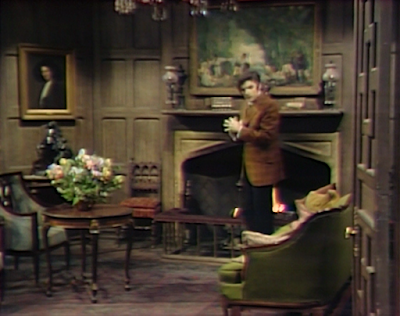 Cyrus reminds Bruno of what he used to say about Angelique coming back. Bruno asks if he thinks she has. He says he doesn't, but he thought it might interest Bruno. Cyrus says he needs Angelique's address book. Bruno tells him to walk in and take it. Cyrus beats around the bush, but wants Bruno to get it for him. Bruno explains that there will be a fee. 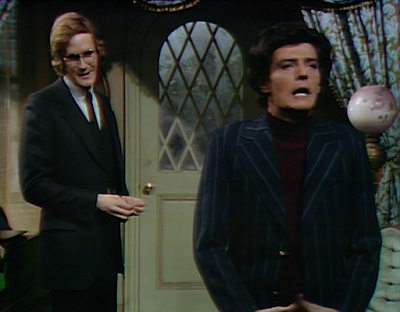 Quentin comes in and asks Cyrus to leave him alone with Bruno. Cyrus leaves, and Quentin gives Bruno an hour to get off his property. Bruno shows Quentin a deed to the cottage that Angelique gave him. Quentin says it's a fraud, and he'll have Chris look into it immediately. Bruno adds that he heard Quentin has a remarkable visitor, who resembles Angelique. Quentin tells him that twins often do resemble one another. He adds that whoever is at the house is no concern to him. Bruno asks if that includes Quentin's new wife, who he heard left last night. 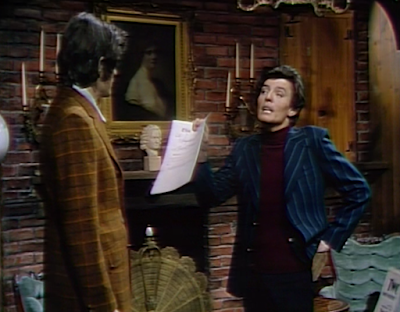 Bruno comes to the main house and Amy lets him in. She tells him that she's upstairs in her room. He asks how he knows who he came to see. Amy asks him if they'll make him call her Alexis, too. 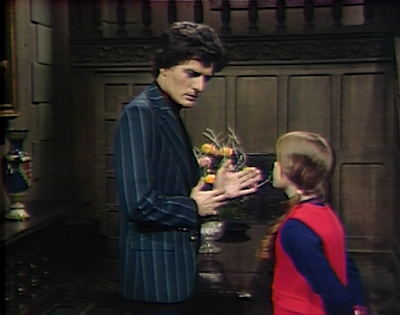 Alexis is playing the piano when Bruno comes into her room. He's shocked by her resemblance to Angelique. He tells her that the song she was playing is his, and introduces himself to her. He adds that the song was one of her sister's favorites. He points out that there's a spot where she would always make a mistake, and asks Alexis to try. She's too bashful to play in front of the composer. 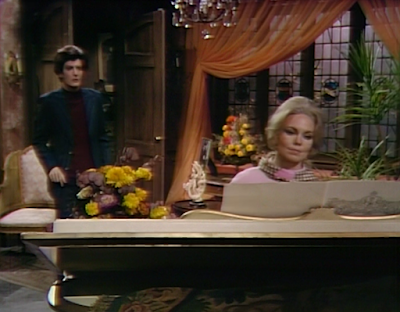 He tells her that he wants to borrow a special book that belonged to her sister. Her address book. He asks if she minds if he borrows it, and she says no. He looks for it in a drawer and finds it. She says she doesn't mind if Angelique wouldn't. Bruno tells her that he lives in the cottage on the estate, and that Angelique gifted him the deed to the land. 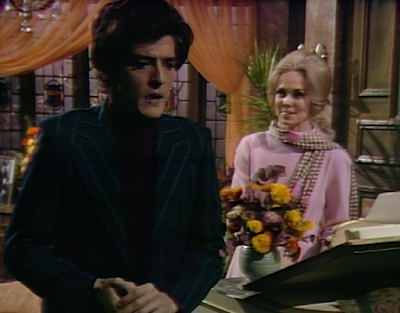 He asks if she'll be staying long, and she says she'll be staying long enough to meet Daniel when he returns. She says that she'll then go back to New York. He asks her about the weather in New York the other day when she was there. He then tells her that they'll catch up, and leaves. She looks at Bruno's picture on the sheet music for "Ode to Angelique." 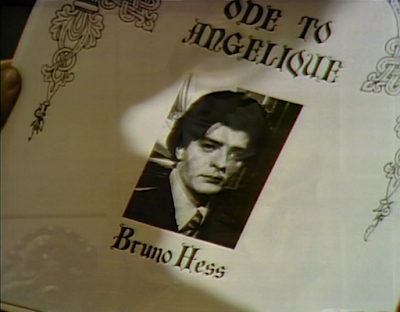 Quentin calls Chris to tell him that the deed must be a fraud, and is angry when Chris says they can't do anything. Amy delivers a telegram that arrived while he was out. He asks who opened it, and Amy tells him she thought it was from Maggie, and she wanted to see if she was coming back. She says that in the telegram, Maggie says that she isn't sure, and wants time to think it over. Quentin tells her that what she did was wrong. Amy says she's not as bad as Alexis. 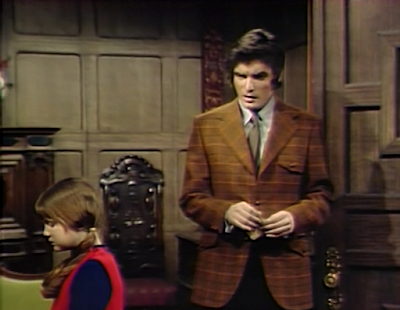 In the cottage, Bruno plays his music while Cyrus reviews the address book. He tells Cyrus that Alexis bears a strong resemblance to her sister. Cyrus thanks him and leaves. Bruno then calls a New York travel agency. He wants to check in on the ship Alexis says she arrived on. 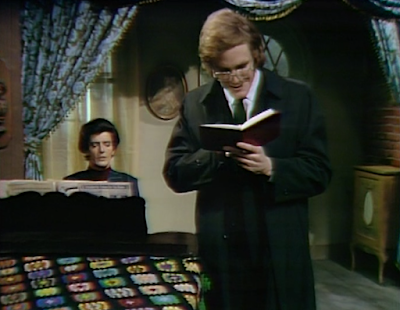 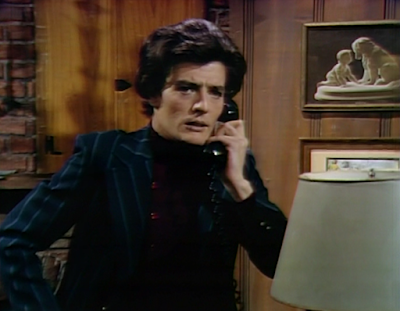 Quentin comes into Angelique's room, where Alexis is playing the piano with tears streaming down her face. He asks her what's wrong, and she says it might just be the room. He tells her that he understands, and then leans in to kiss her. 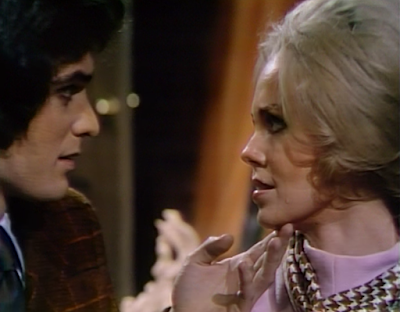 John: So there appears to be an even mix between those in Collinwood who think Alexis is truly Angelique's twin sister and those who think it's all an act, and she's Angelique resurrected. For those of us at home, how could we believe that she's anyone but Angelique!

Christine: It's seems it might be one of those situations where they are making us believe that it must be Angelique by trying so hard to convince us that she's not Angelique so that they can pull a switcheroo and have her turn out to actually be the twin sister, Alexis. I have to assume that parallel Angelique was able to exist through the centuries as original time Angelique did, by supernatural means, which might indicate she also has the same prowess at creating doppelgängers as the Angelique we know. In other words, even if she's not Angelique, she is. Right?

John: So Bruno has had a deed to the cottage for more than six months, and has been holding onto that just waiting for the day he could wave it in Quentin's face? I wonder if he's a one-hit wonder with "Ode to Angelique," or if we'll ever hear any other tunes that he wrote.

Christine: I'm guessing it's his only hit or he might be living in his own mansion on a hill rather than shacking up at a tiny cottage on the estate, though I suppose it could be his undying love for Angelique that keeps him there.

John: Damn, Quentin! Angelique didn't even have to put a spell on you to get you to cheat on your new bride! 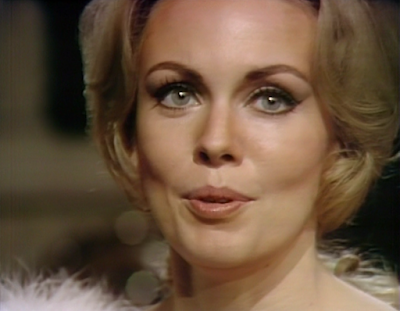 Second Down for the Count:
Barnabas was chained in his coffin 4 episodes ago.
Posted by John Scoleri at 6:00 AM