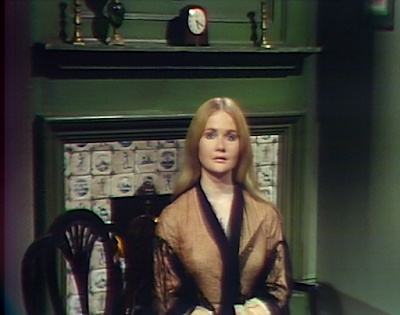 Charity removes the cross from the window and places it in a drawer. She turns to see Barnabas standing in her room. She says she was afraid for him. He tells her that he is safe now, thanks to her. She says it's too dangerous for him to return to her. He tells her that her father has underestimated his powers. She says she must not stay long, as he must find a permanent hiding place where he can take her with him. She tells him that is what she wants. He leans in to bite her neck as Nora walks into the room. 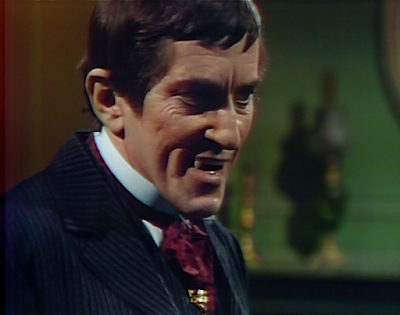 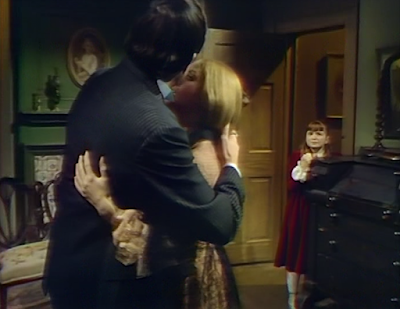 Barnabas sees her and shuts the door. She says that they told her he's bad, and that he hurt Charity. Charity tells Nora that she let him in. Barnabas tells Nora to look at him, and Charity asks him not to hurt her. Nora refuses to look at him and runs to Charity. He assures her that nothing will happen to her. He tells her she can look at him without anything happening to her. She turns, and he tells her to come to him. She does. He reminds her that they were friends, and says that he hasn't changed. She asks why they're hunting him, and he tells her to look into his eyes. She looks in his eyes and sees that he doesn't want to hurt her. He tells her he's going away, and she won't remember that he was in the room. He tells her to close her eyes, and he disappears. 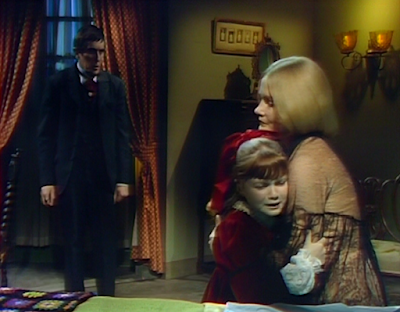 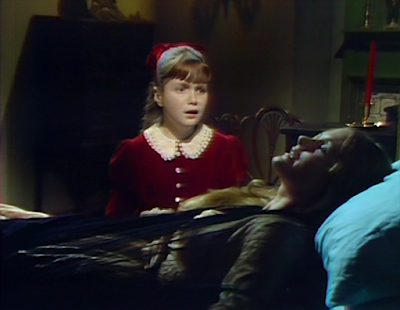 Evan arrives at the school and finds Nora crying. He asks her what's wrong, and she says that Charity is going to die. She asks her 'uncle' Evan to help her. Evan asks if Charity was alone. He asks if Barnabas was with her, and Nora shakes her head, no. 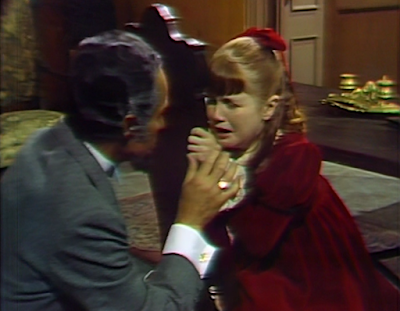 Magda makes her way through the woods with the hand-in-a-box. She enters a cave and finds Barnabas and his coffin. He asks why she's there. She tells him that she had to see him. He asks why she brought the hand. She tells him Quentin came to the old house to see the cure. She says that she was concerned he would come back to the house to find it before he turned tomorrow night. Barnabas says he's concerned that Quentin will be changed in a way that will impact Chris Jennings in the future; a man locked in the mausoleum, changed into a werewolf and unable to change back. He wonders about the power of the hand. Magda says it can be good or evil. He asks how can they know it will be good for Quentin, particularly if she stole it. She says they can test it out on someone else who needs help. Barnabas realizes they could use it on Charity. 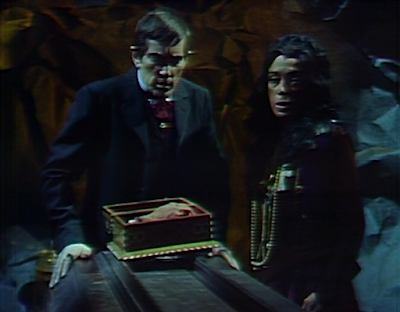 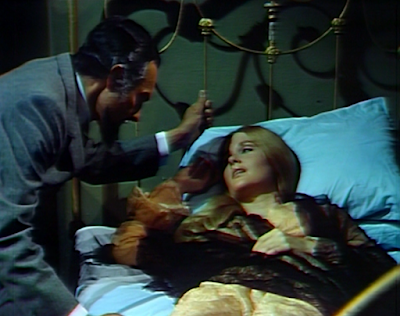 Barnabas asks if the hand, now out of the box and sitting on the coffin,  can cure Charity. Magda says it can if he lets it. She says he can make Charity come to them, no matter how sick she is. He calls her, beckoning her to come to him. 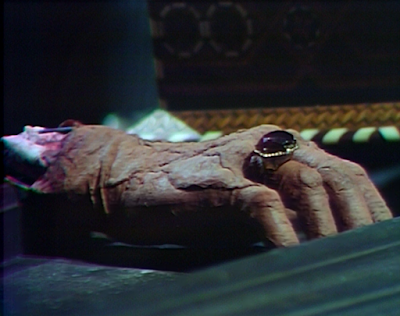 Evan notices a change in Charity and asks what it is.

Barnabas tells her to come to him now.

Charity tells Evan to leave her. She gets up and says it's time. He tells her that he won't let her go to Barnabas. 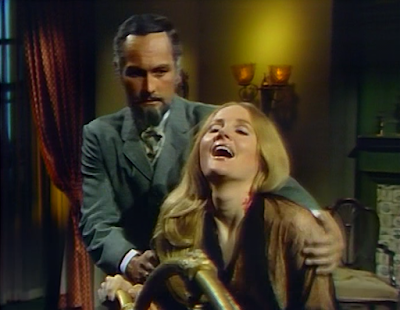 Barnabas continues to call to her.

Charity tells Evan to let go of her.

Barnabas realizes that someone is preventing Charity from coming. Magda asks if she died, and he tells her that she would be with them if she had. Magda turns and finds the hand is missing. 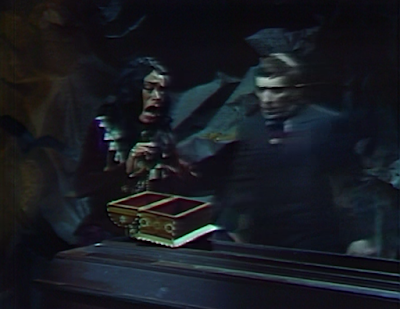 Charity says he needs her, and Evan says Barnabas is using her. Suddenly, Charity's mood changes. She says he doesn't want her anymore. Evan helps her back into bed. She says no one can help her. Evan goes to get a doctor when Charity screams as a disembodied hand approaches her face. 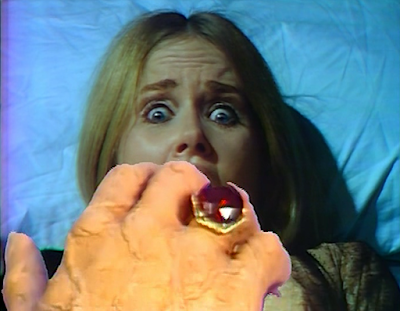 She stops screaming as the hand disappears. Evan notices the marks are gone from her neck. Charity gets up and says that Evan shouldn't be in her room. He says the legendary Hand of Oshden was in the room, sent by Barnabas. She doesn't understand what he's saying. He tells her to get up and look in the mirror. He tells her to look at her neck, and she seems to recognize that the marks on her neck are gone. He asks her what else she remembers. 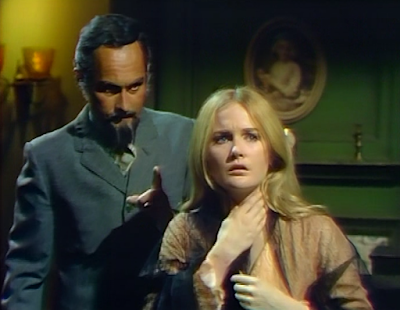 Magda says the hand is nowhere to be found. Barnabas says it has gone on a mission, to see Charity. He asks if the hand has such power. She says it does, but she didn't believe it. Barnabas points out that the hand is back. She says it's a miracle. 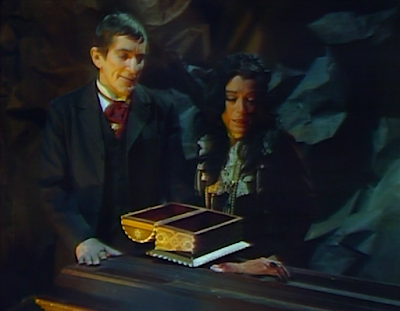 He tells her to take it to the old house and hide it from Quentin. He's going to check on Charity. He leaves, and Magda tells the hand that she knows it will help Quentin. 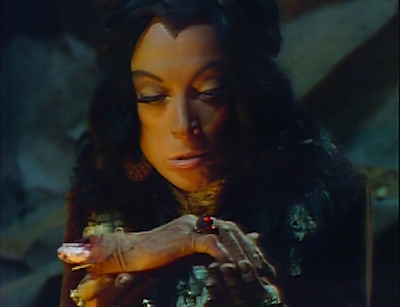 A bat flies into Charity's room. Barnabas appears, but the room is empty. He wonders why she isn't there. 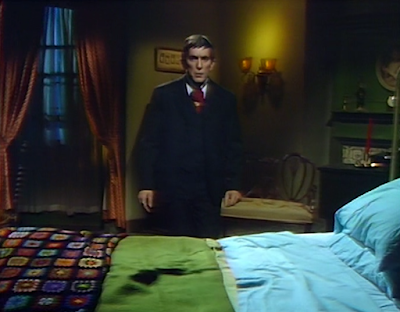 Nora tells Charity that she was worried about her. Charity assures her that she will not fall into the valley of sin again. She asks Nora to pray with her. 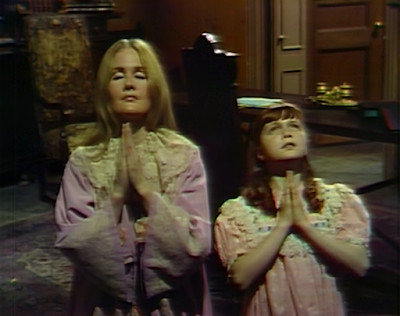 Barnabas returns to his coffin in the cave. He hears someone, and calls out to see if it's Magda. He finds Evan, holding a cross. He bids Barnabas a good morning. 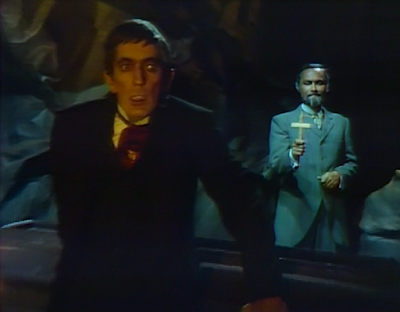 Christine: It is a mystery how this was never marketed. Who wouldn't love to have their very own Hand of Count Petofi to wish upon? It's kind of funny that it's so eager to do Barnabas' bidding that it just takes off on its own accord.

John: Dismembered hands have come a long way on Dark Shadows. I don't know how they'll ever top this particular severed hand (The Hand of Oshden? The Hand of Count Petofi?) with a mind of its own!

Christine: You may be interested to know that handy Timothy Gordon lends a hand to portray the floating Hand of Count Petofi, just as his floating hand once tormented the original Reverend Trask in Episode 440. He's got his hands all over this show.

John: So are we to assume that Charity knew where Barnabas was hiding, and she passed this information on to Evan? Or does Evan have the severed hand equivalent of Find My iPhone to track the hand's location?

Christine: I like to imagine that he followed it as it floated back to the cave. Incidentally, the box that contains the Hand of Count Petofi can be seen in early episodes on a table outside Vicki's room. After doing a little research, I found that The Dark Shadows Almanac: Millennium Edition details quite a few episodes the box appears in during different time periods, for those who are interested in that sort of thing, but be aware that there are spoilers.