Magda stares at a mangled-face Evan, who sits in a chair at the old house. There's a knock at the door, and she tells Evan to get up, and she leads him to the basement. Outside, Quentin calls to Magda. 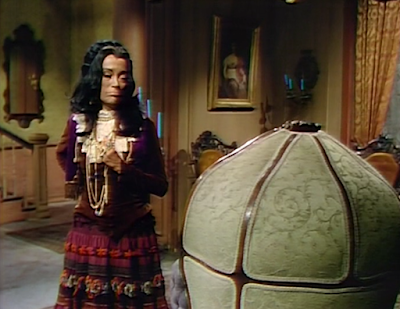 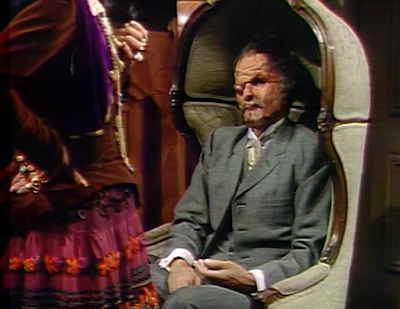 After Evan is hidden, she answers the door. He asks her where Barnabas is. He reminds her that there will be a full moon tonight. He hears something coming from the basement, and Quentin asks who she's got locked down there. Mangled-face Evan looks out through the cellar bars, and Quentin demands that Magda tell him who it is. 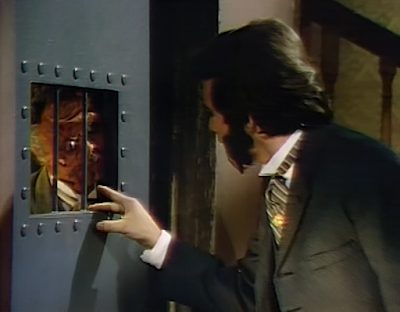 He asks what happened to him, and tells her to let him out. He's concerned that he heard what he said. When he leads him out, Quentin asks him who he is and what he hears. Mangled-face walks back to the chair he had been sitting in, and sits down. Quentin asks where he came from and why he's there. Magda says she found him in the woods. Quentin asks if Barnabas knows the man is there and she says yes. She tells Quentin the man's mind has been destroyed. She assures Quentin that the man has nothing to do with him, and tells him to go back to Collinwood. Quentin tells her to get rid of the man so she can tell him what's going to happen to him tonight without the man hearing. She says if he wants to know what will happen to him tonight, she will show him. 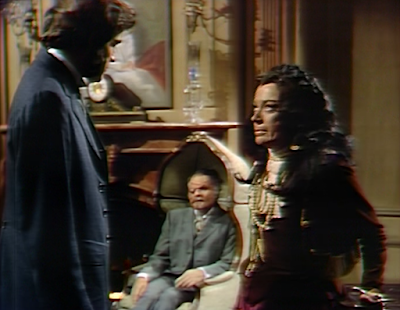 She leaves the room. Quentin questions mangled-face, but gets no response. Magda returns with the box. Quentin asks to see the hand. He notices that mangled-face is upset, and Magda escorts Evan out of the room. When she returns, Quentin asks her if he was frightened of the hand. Magda tells Quentin that the hand will rip the curse from him. He asks what it can do besides curing him, and she says only the ancient gods know. Quentin laments how he explored the black arts. He asks her if he has to decide by dusk, and Magda says he does. 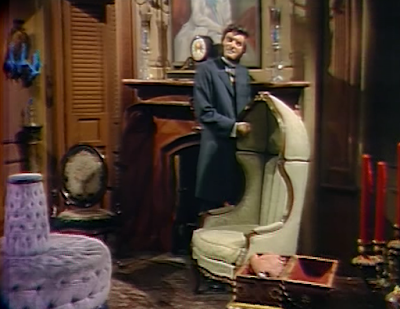 Judith unsuccessfully tries to reach Evan Hanley on the phone.

Edward returns to Collinwood wearing a top hat. Quentin arrives shortly after. They enter the drawing room. Judith says that she hoped dear Gregory would be back by the time they got back. Edward scoffs at her describing Trask that way, and she tells them that he is her husband. Quentin laughs. Edward is shocked, and calls her mad. Quentin congratulates her. Edward says he doesn't mind him as a teacher to his son, but he didn't want him in the family. He accuses him of marrying Judith for her money, and she slaps him. 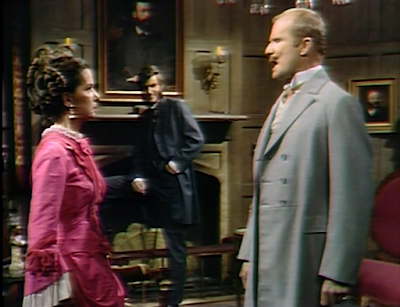 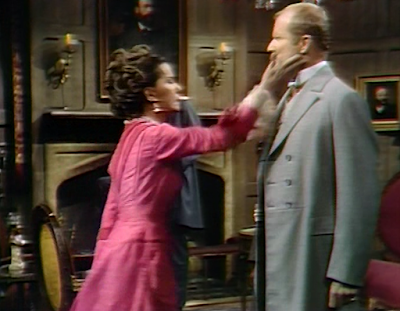 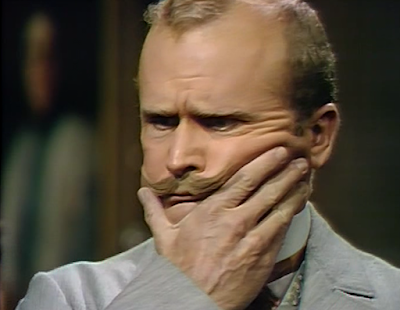 Judith tells him that Gregory will be living with them, and if he doesn't like it, he can leave. Judith says that marriage has changed her. She is relieved that someone else will take charge. Edward asks of what, and she says she won't be bothered with business. Edward reminds her that their grandmother left her the money, and after her, it goes to Jamison. He asks what will happen if she dies before Jamison comes of age. She says Gregory will administer the estate, and she's drawn up papers to that effect, and she's just waiting to meet with Evan. Edward storms out, and Quentin goes upstairs. 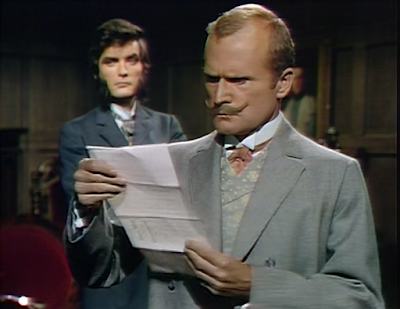 The doors to the drawing room close mysteriously. Judith re-enters the room to find torn papers on the floor. Her changed will is now in pieces. She asks who's in the room with her. She turns again and is shocked to see a bible open on the desk with a dagger stuck in it. She reads a passage referencing that the 'evil is still to come.' She then sees a child's drawing of Mrs. Trask on the wall, which she realizes is Minerva. 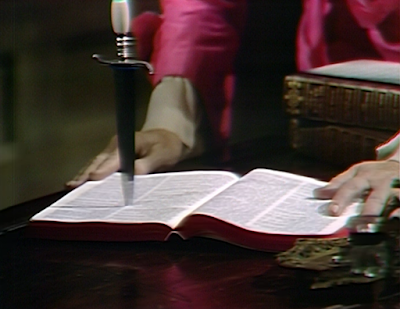 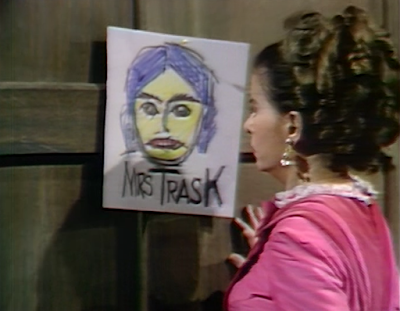 Edward tells Quentin to quit staring at the clock. He says they must come up with a solution. He refuses to consider Gregory as the master of Collinwood. He says they must go see Evan together after dinner. Quentin tells Edward not to count on him, and storms out. 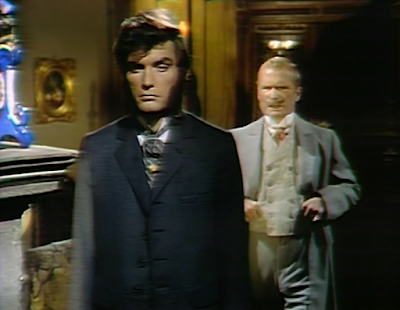 Magda arrives at Collinwood to see Quentin. She tells him that if he doesn't try tonight, she doesn't think he'll have another chance. He says he'll be there at dusk. Edward comes in, and she congratulates him on having a new man in the family. She leaves, and Edward asks if he's meeting with Magda at dusk instead of Evan. Quentin leaves him. 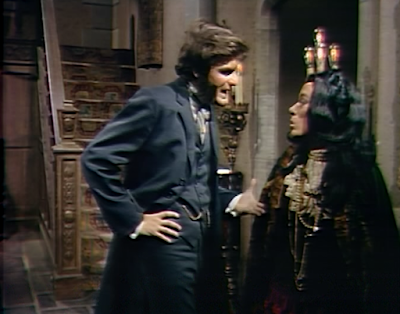 Edward goes into the drawing room to talk sense into Judith. She says she is Judith Trask, and he asks if she already regrets it. She says she does not, and he tells her that he will see to it that she does.

Quentin arrives at the old house at dusk. Mangled-face is sitting in the dark. Quentin asks who he is, and mangled-face says he is Evan Handley. Magda comes in, and Quentin asks if it's true. Magda gives Quentin the box with the hand, Evan says, "hand," and cowers. Magda leads Evan away. 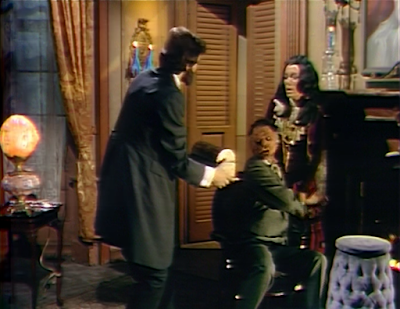 When she returns, Quentin says if the hand could do what it did to Evan, he doesn't want to have anything to do with it. He begins convulsing as the transformation takes effect. Magda says it can't be any worse, and asks if he wants her to try. He tells her to try. She recites an incantation to remove the curse, and places the hand on Quentin's heart. 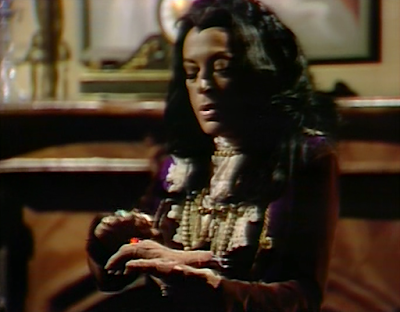 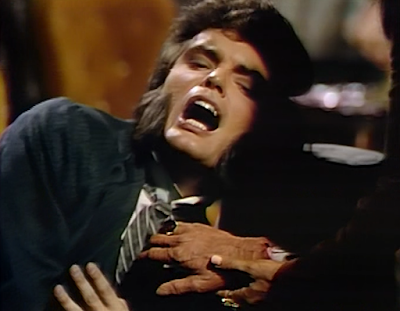 John: Now that's an unexpected turn of events! Evan Hanley lives! Well, sort-of, anyway. I'm happy to have him still around, drooping eye and all (is that the Jeremiah Collins eye?). I thought he would be relegated to another silent character, so it was a nice surprise to see him start whimpering when Magda brought out the hand to cure Quentin. I can't imagine that mangled-face Evan will have a long tenure, but I hope we get him for a few more weeks anyway.

Christine: It sure looks like the Jeremiah Collins droopy eye! Barnabas wanted the Hand to make him his servant, so we'll see how much serving he's able to do in his current state.


John: I was amused that Quentin is not at all put-off by Evan's mangled face! He's just upset that a stranger was present. You'd think that he might make a bigger deal out of someone so disfigured just lounging around the old house.

Christine: Well, it's just another freak hanging out at the Old House, after all. He really should have been able to recognize Evan by the suit and hair though. Speaking of suits, Edward was looking rather dapper today. 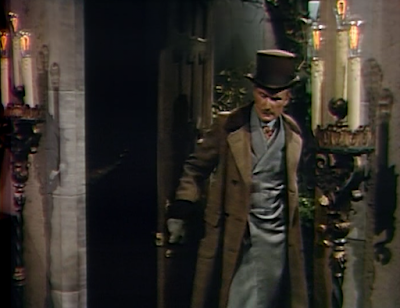 John: I look forward to the coming conflict between Trask and Edward. It was quite a shock to hear Judith even refer to herself as Trask (and not Collins-Trask).

Christine: It had me thinking the drawing might have actually been her and not Minerva. I wonder who was responsible for that fine piece of artwork. Too bad Carl is not around to hear this terrible news. I guess you were right about the family not being too broken up over losing Carl. It seems he's already been forgotten, though the past few weeks have been quite eventful with a high mortality rate, Barnabas being outed, a magical severed hand, and Judith's elopement. This week really ended on a high note with a demonstration of the awesome powers of the Hand of Count Petofi. It will be interesting to see what the Hand does to Quentin, and what Trask will do to Judith. 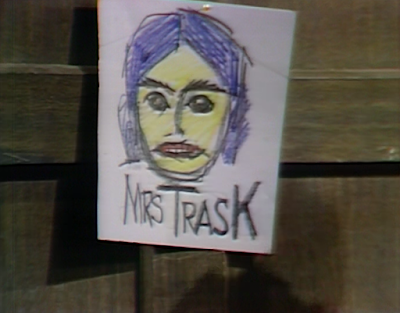 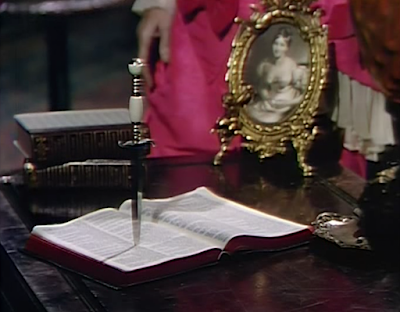 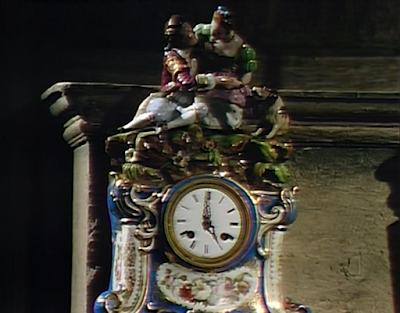