Barnabas returns to his coffin in the cave. He hears someone, and calls out to see if it's Magda. He sees Evan, holding a cross. He bids Barnabas a good morning. Barnabas asks how he found him. Evan says he thought he'd be more interested in what he intends to do, now that he has found him. Barnabas asks if he brought a hammer and stake, or silver bullets. He stands with his back to Evan and tells him to get it over with. 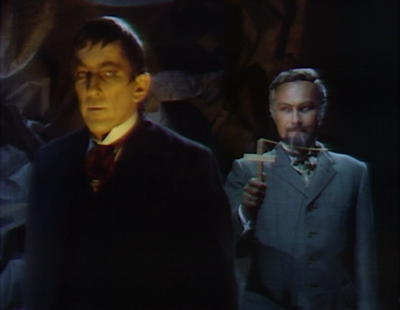 Evan lowers his cross so Barnabas can look at him. He says that he is not planning to kill Barnabas now. He tells Barnabas that he will be at his mercy. He says that Barnabas knows much that he wants to know. Evan asks him about the hand from the forest of Oshden. The hand of Count Petofi. Barnabas says he admires his imagination. Evan says he wants the hand that cured Charity. Barnabas is surprised to hear that. Evan demands that Barnabas give him the hand. He asks if it's in the cave, and Barnabas says that it's not, but that it will be back at dusk. He adds that he must be alive at dusk in order for Evan to get it. Evan agrees to return at dusk, threatening that it might be Barnabas' last. 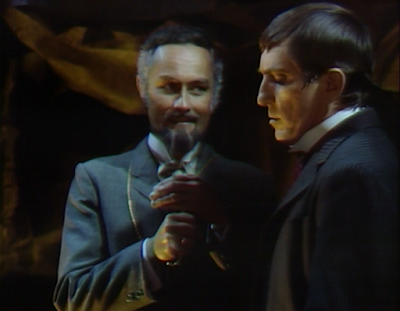 Judith can't believe that Barnabas was the secret their grandmother kept. Trask tells her that the evil men do live after them. He says he has come to Collinwood on a sad mission. She tells Trask to let her help him. He says he has decided to close the school and leave Collinsport forever. She asks him to think of the children, and then suggests that he's leaving because of the Collins family. Trask says that just one of them has made him make the decision. She asks him who is responsible, and he tells her that it is her. He says that she would never consider marrying him. And then he asks if she would. 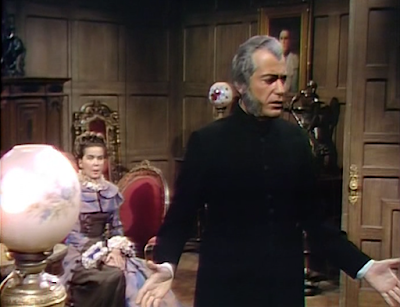 He apologizes for his impetuousness. He says he knows there's no hope, but at least now she knows why he must leave Collinsport. She tells him to stop. She says that no one has ever proposed to her before. She says her grandmother said she frightened men away. He brings up Minerva, acknowledging that Judith's probably thinking of her, too. He says that they could marry, and she tells him yes. She says it will be an understanding between them, and at the proper time they will announce. He tells her they shouldn't worry about what others think. She tells him they must be proper. Trask tells her that they must marry today, before someone tries to come between them. 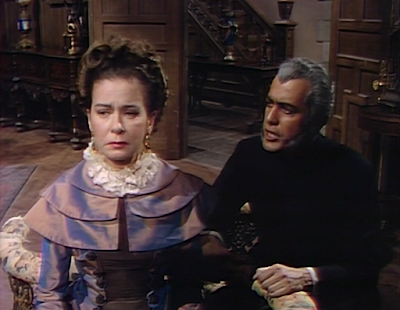 He asks if she trusts him. She says she does, and he tells her to come with him, and they will return as man and wife. She explains that it can't happen this way, and Trask casts away her concerns. 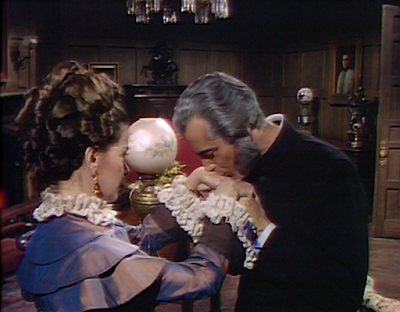 Barnabas has arisen, and waits for Evan to return to the cave. Magda shows up with the hand, and Barnabas tells her that her psychic abilities have failed her. He tells her that Evan knows about the hand, and he wants it. She says she'll bury it in the woods. Barnabas says he must outwit Evan, and he needs the hand. He tells her the hand cured Charity, and asks if it can do evil. She says yes. Barnabas tells her she must use it to make Evan his servant. She tells him that's not how the hand of Count Petofi works. It does what Petofi wants it to do. 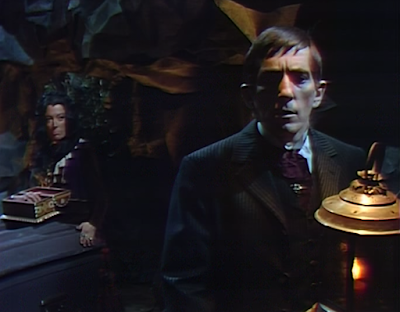 Magda begins a ritual over the hand, asking for help. Evan shows up and is excited to see Magda talking to the hand. He asks Barnabas to please give it to him. Barnabas says that if Magda gives him the hand, it will do him no good. Barnabas tells him the hand belonged to the most evil man, and tells Evan to look at while wearing his cross. Evan says he won't take off the cross in his presence. Magda tells Barnabas to let the hand kill him, and Barnabas says that Evan didn't disturb him while he rested, when he could have. Magda lets Evan approach the box. Evan puts his hands on the box, and tells Barnabas to leave the cave. He does, and Evan removes his cross. He then opens the box. 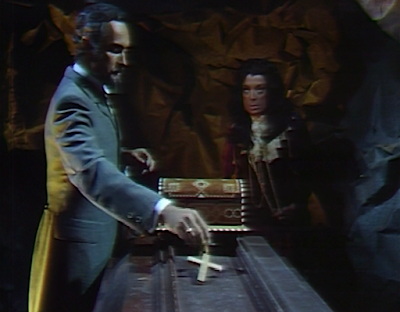 In Collinwood, Judith tells Trask that she can't believe they did it. She says it feels wrong, and he tells her that she will soon become accustomed to happiness. He adds that he will take care of her family. She screams, saying she saw Minerva by the window. 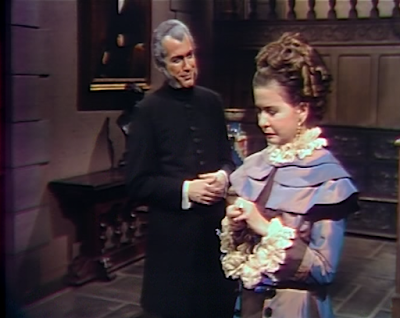 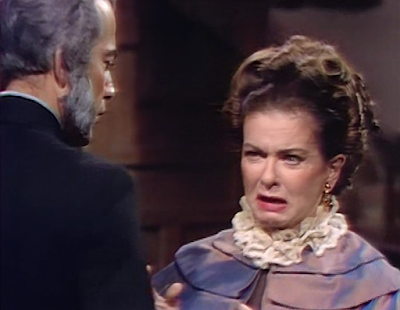 The hand rises and covers Evan's face. He screams as Magda watches. Barnabas returns, and she says that he's dead. Barnabas says they can't take a chance using the hand on Quentin. She confirms that it's back in the box. They look down at Evan's mangled face. 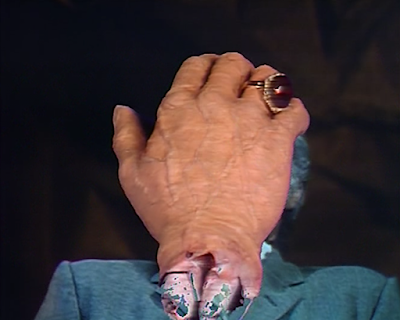 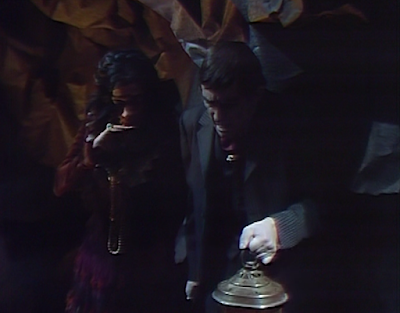 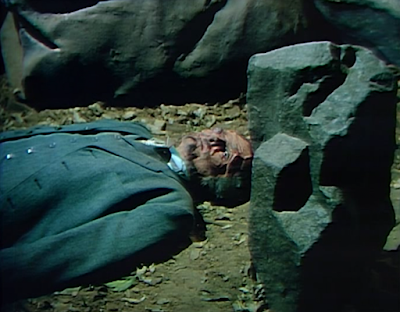 John: It looks like I gave Evan too much credit. When he started toying with Barnabas in the cave, my immediate thought was that his ego would be the death of him. I don't know why he felt that a cross alone would allow him to become Barnabas' master.

Christine: Did he steal it from Trask or is there some shop down at the docks that sells large crosses hung on long chains?

John: Trask is a master manipulator! In the course of one episode, he has convinced Judith to marry him, AND they actually got married. Why do I think this moment will soon be wiped from the official Collins family history. 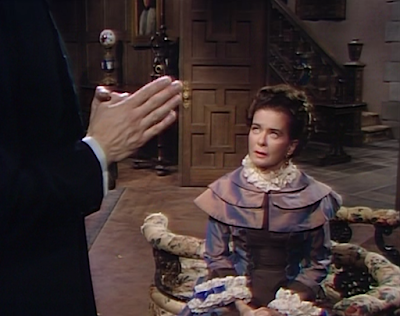 Christine: Before Judith claimed she saw Minerva's ghost, I thought she was reacting to Trask telling her he'd make her a proper wife. How frightening! 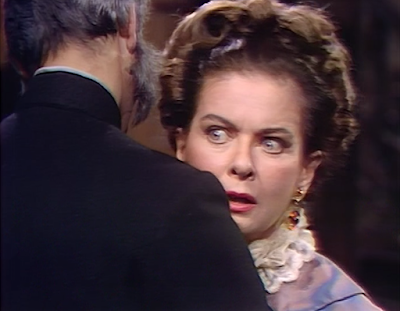 John: No! Not Evan! If he's truly dead, he will be missed, but what a way to go! I particularly loved mangled-face Evan, which almost looks like it was crafted out of Papier-maché. 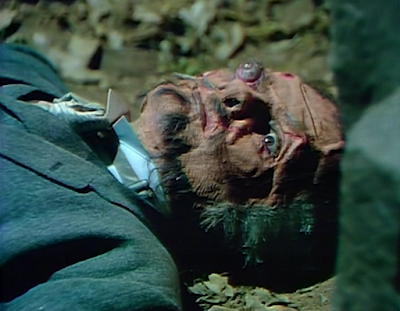 Christine: It actually looks pretty good close up. Bulging eyeballs are always a hit on this show. Magda and Barnabas might want to check the box for an instruction manual before they use the magic hand again.